Rosecomb Chicken: All You Need To Know 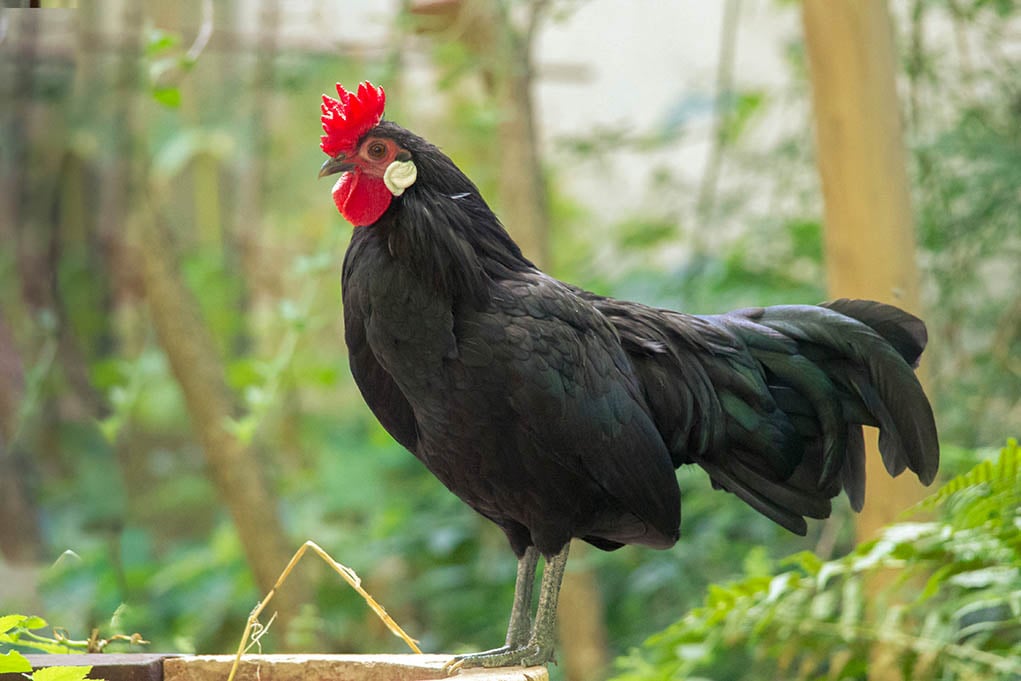 The History of the Rosecomb Chicken

The Rosecomb chicken is a bird with a rich history, dating back to 14th century Britain. In fact, it was King Richard III that took an interest in raising this pretty little bird. And, of course, the popularity of the breed exploded after he began raising his own flock.

Like most poultry breeds, there isn’t a lot of information on the specific development of the Rosecomb Chicken. With that being said, there are a few theories on how the Rosecomb chicken came to be.

One such theory is that the Rosecomb is the original bantam (more on that soon). This is a fairly widespread opinion among bantam enthusiasts. Yet, some believe the Rosecomb is merely a small version of the Hamburg.

The latter theory is not far off because, during the breed’s development, the Hamburg was used to rectify feathering and earlobe coloration issues within the breed. Regardless of the origin, one fact that’s for certain; Rosecombs were shown at the first North American Poultry Exhibition in 1849 when they were admitted to the American Standard of Perfection (APA).

Unlike many early hobbyists raising chickens for the fight ring, the Rosecomb was raised for the showroom. Today, it is still considered an ornamental breed perfect for showing and winning ribbons.

What Came First The Rosecomb or The Chicken?

With that being said, the comb was painstakingly developed through careful breeding. Thus, the comb is important and scrutinized, characteristic in the show ring. In fact, it’s said that some fanciers altered their Rosecombs’ combs by carving them to perfection. Of course, this ploy did not go unnoticed for long. And today, birds with altered physical qualities are disqualified from any respectful show ring. So, it’s safe to say that the rose comb atop a Rosecomb’s head is a significant characteristic for this breed of chicken.

The Color of the Rosecomb Chicken

The Rosecomb Chicken comes in over 25 different color varieties, but the most common are black and white. The colors that the APA accepts are black, black-breasted red, white, and blue.

But arguably, the most important color on the Rosecomb is its strikingly white earlobes. The brilliant bright white ear lobes were coveted in the early show days of this breed, so-much-so, that the breeders would alter the lobes to be whiter than they were.  Again, this sneaky tactic doesn’t work in the show ring today, and in many cases, it wouldn’t be necessary.

The Rosecomb Chicken is a Bantam

Most of the time, the Batam variety is simply a smaller version of the standard variety. Actually, bantams aren’t typically a breed on their own, and rather, they’re considered a variety. The Rosecomb, on the other hand, is regarded as a true bantam. In other words, there isn’t a large counterpart, and the small version is the only version of this breed.

You can find a Buff Orpington in the standard (large) size and a miniature version (the bantam). Speaking of miniature, the Rosecomb hen weighs in at a whopping one pound at maturity. At the same time, the rooster can get up to nearly two pounds.

The Appearance of the Rosecomb Chicken

The Rosecomb chicken is visually appealing. The black-colored birds have a lovely green sheen which contrasts fantastically against the large white earlobes of this fancy bantam.

While these upright features may make the Rosecomb look large and mighty, it’s genuinely a compact, friendly little chicken. Of course, we can’t talk about the Rosecomb without mentioning its comb, which is brilliantly red and quite large for such a small bird. The combs have a more prominent angle than some other breeds with rose combs. In fact, the combs almost appear pointed. 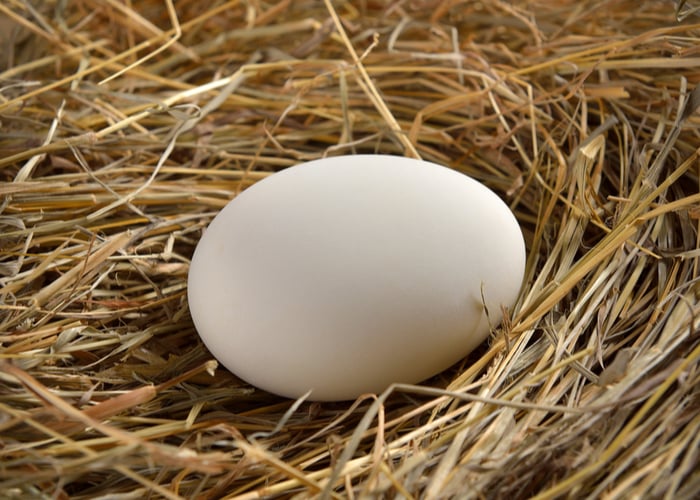 The Eggs the Rosecomb Chicken Lays

While there a many attractive qualities about the Rosecomb, one of them is not their ability to lay eggs. The Rosecomb hen lays about one small, white egg per week. So there’s your second clue that this chicken wasn’t bred for production. Instead, it was developed for its beauty.

Hens typically won’t go broody, either. In fact, this breed is quite the challenge in the fertility department. So breeders have to do most of the incubating for the hens, and even then, this breed’s hatch rate is quite low.

The Temperament of the Rosecomb Chicken

A friendly breed, the Rosecomb is popular amongst those who prefer to keep chickens as pets. While the consensus is that Rosecomb chickens are kind, well-mannered birds, there are always a few that go against the grain.

Some roosters, for example, maybe aggressive. But these differences can vary in every breed. For example, the Rhode Island Red Rooster has a reputation for being an extremely aggressive roo. However, there are plenty of Rhode Island Red lovers that will happily point out that their rooster is perfectly friendly and docile.

As you can see, temperament can vary from chicken-to-chicken and assumptions should not be made about any individual bird’s temperament. Furthermore, behavior can also depend on how a chicken is raised. Even flighty chickens can be tamed if handled often as a young chick.

Even though the Rosecomb is a friendly, fairly docile breed, it can come across as flighty. The reason for this? It’s mainly because the Rosecomb is a fantastic flier…for a chicken, that is. In comparison to other chickens, the Rosecomb can fly higher and farther than many breeds.

Speaking of the Rosecomb’s flying abilities, the chicken coop must be equipped with their talents in mind when planning for these little birds. Coops and runs should be well-covered to prevent Rosecombs from “flying the coop.” With that being said, Rosecombs do quite well in confinement and aren’t the best free-rangers.

On the other hand, they do have flying skills in their favor, so escaping from ground predators is a cinch. Regardless of their flight talents, the Rosecomb has been raised in confinement for a long time. Today, under the protection of a designated space, the Rosecomb thrives the best.

You see, Rosecombs are at the bottom of the food chain. And if left to run wild, their small size makes them easy targets for aerial and ground predators.

Because the Rosecomb does well in confinement, it can be kept nearly anywhere in the world. However, coops must be constructed to withstand all seasons to protect this small chicken from the elements.

In that same vein, even though the comb of the Rosecomb is one of its most desirable traits, it’s also the one that can cause the most problems during frigid temperatures. Extra care must be taken to protect the Rosecomb’s dainty comb from frostbite. Unlike breeds with combs that lay closer to the bird’s crown, the Rosecomb’s comb is exceptionally pointed, extending above and beyond the top of the bird’s head.

On the other hand, Rosecombs prefer mild temperatures rather than extreme heat. If this little banty overheats, it will pant, and its wings will droop, indicating it needs shade pronto. So like most breeds, as long as the Rosecomb has the relief it needs in extreme temperatures, it can be kept in any region of the world. 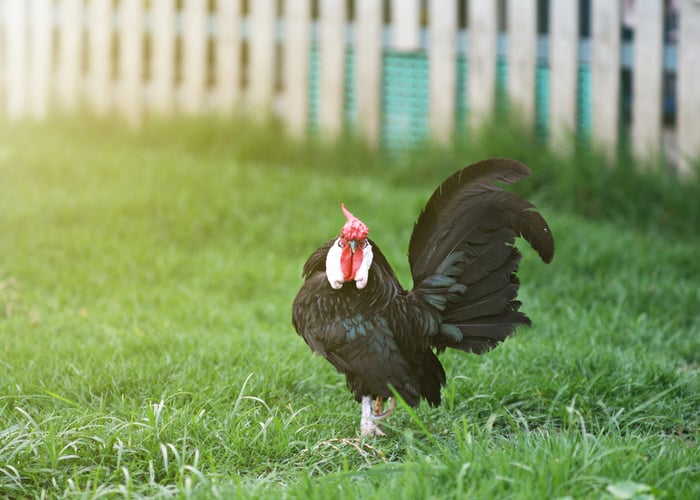 What The Rosecomb Chickens is Bred For

Since Rosecombs are friendly, beautiful birds in a compact size, they are very popular as pets. In fact, some keep the Rosecomb simply as a pet rather than a show bird or layer.

On the other hand, this bantam is most popular among fanciers who live for the show ring. The breed’s sole purpose, for avid Rosecomb fanciers, is to promote the standard of perfection and win in exhibitions.

Fans of this chicken breed the Rosecomb to excel in the show ring. And the majestic little bantam certainly doesn’t disappoint. 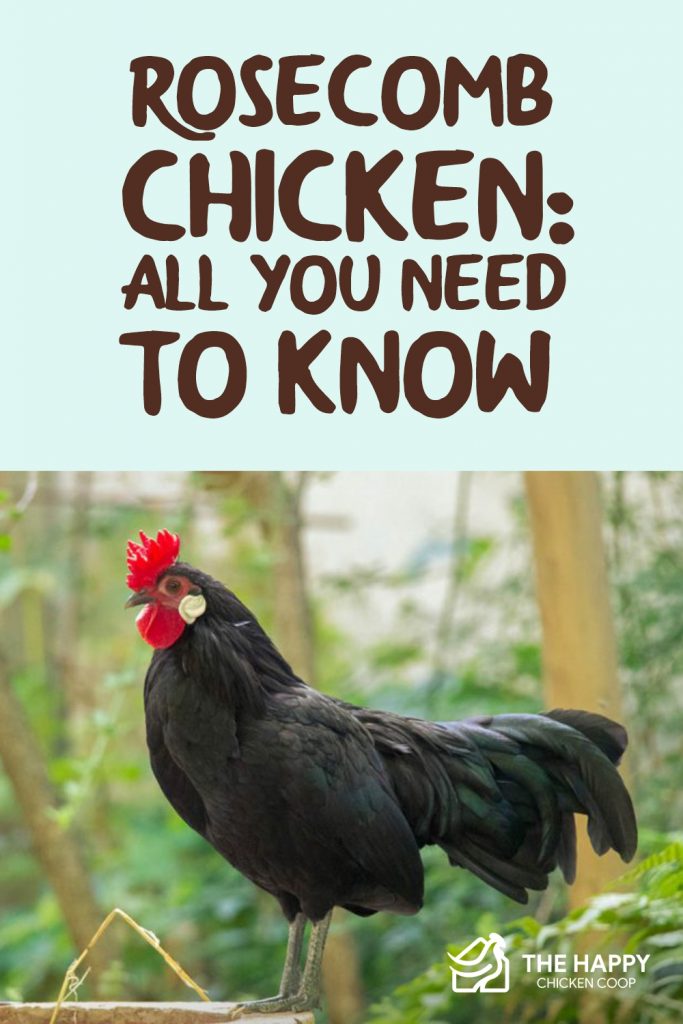 One thought on “Rosecomb Chicken: All You Need To Know”