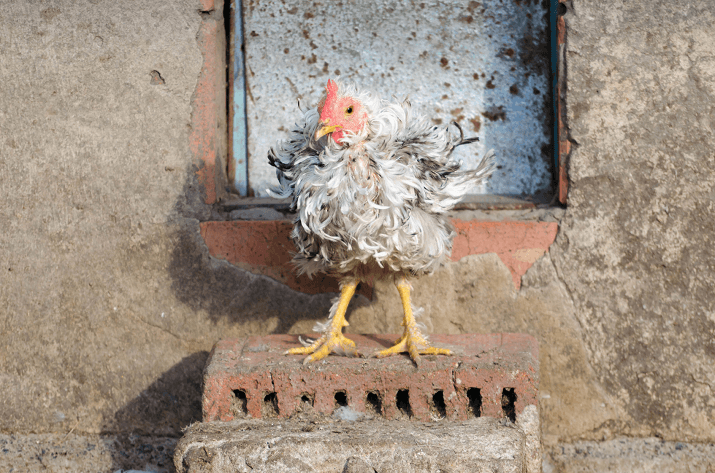 What, you may ask, is a frizzle? It is most definitely a chicken, but a chicken with a very unusual look and some special needs to go with the look.

They are fun, conspicuous, and lovable – what more can you ask of the chickens in your life?
They are treated differently in some countries, as we shall see, but they are most definitely loved around the world.

Today, we will talk about this unusual-looking bird and whether or not it would be an ideal addition to your backyard flock.

The Frizzle is not a new breed; in fact, they were first mentioned in the 1600s.
Charles Darwin also mentioned them – he called them Caffie Fowl. He stated in his documents that they were found predominantly in India.

He must have gained this knowledge secondhand since he never visited India himself.
The frizzle gene seems to have arisen in the Far East (possibly China) and East Indies areas.

As interest in this unusual-looking bird gained momentum, they brought it to Western countries as curiosities and breeding stock.

Certain breeds are more prone to frizzling than others: Cochin, Polish, Plymouth rocks and
Japanese bantams are the main breeds, but many other species can be fried.

If you cross a Silkie with a Frizzle – you get a Sizzle! 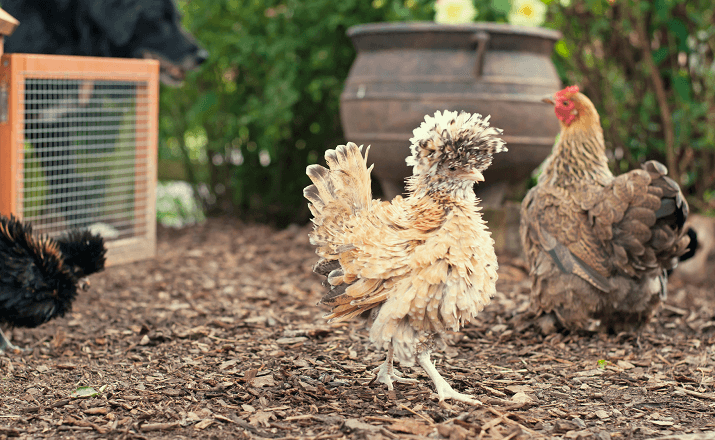 Frizzling is where the feather starts to curl upward and outward from the body instead of lying flat against the body as in a ‘normal’ hen.

The shaft of the feather starts to twist and curl, causing the unique appearance of the feathers.
Frizzling is caused by an incomplete dominant gene.

One copy of the gene present in one bird is sufficient to cause frizzling. A copy current in both parent birds will result in a high incidence of frazzles.

The amount of frizzling that you get on a bird can be quite variable due to the ‘mf’ gene. 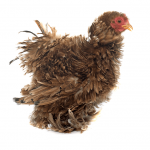 This is the ‘frizzle modifier gene, and if present, it can cause your frizzle chick to look relatively normal.

Responsible breeders do not breed Frizzle to Frizzle. This would give you Frazzle or ‘curly chicks. The acceptable practice is to produce Frizzle to an average hen which will provide you with a mix of regular and frizzled chicks.

Frazzles are incredibly delicate. The feathers can be so brittle that they break at a touch, feathering can be patchy, or even near-total baldness can result.

The heart and other physical issues can also be linked to Frazzles, which usually means the chicks will not survive very long or live relatively everyday life. 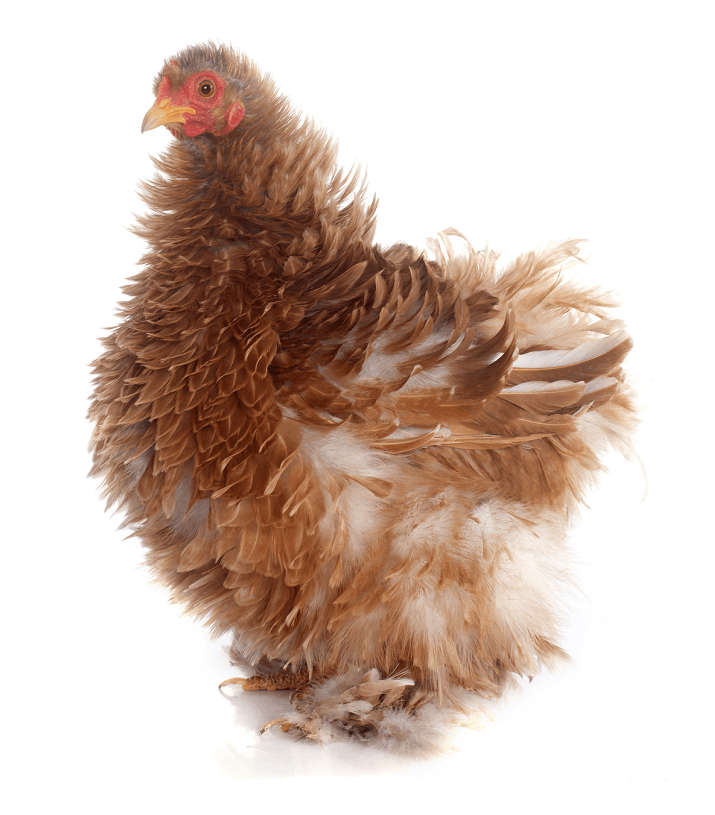 This might seem unclear to us here in the US since frizzles in the US and other places are classified as a type of plumage.

This does not mean you cannot exhibit them. You would show them as specimens of the breed, i.e., Cochin, Polish, etc., and they would judge the bird according to the standard for that particular breed.

Cochins seem to do well competitively in the bantam class as frizzles.

As a breed type, they are classified in South Asia, the Philippines, and Java classes.

They have a short, strong beak, yellow/horn in color; eyes are bright and red in hue.
Ear lobes and wattles are medium-sized, red.

They should be full-breasted and have short, broad, erect bodies. Tails will be significant and the wings long. Combs are single and upright. Birds will have clean legs and feet, which should be yellow.

Some black shading is allowed in the black/blue colors. There are four toes to each foot.

Weight can be variable depending on your breed of Frizzle (US), so the size can vary a bit -standard birds should weigh around 8lb for males and 6lb for females.

At first glance, they appear as a bundle of wild, curly feathers with legs – much like a feather duster!

Depending on the breed of chicken, the feathers will look ‘curly and tidy’ or ‘wild and windswept.’ They should all look soft, though, not spiky.

The chicken will take the shape of its breed – the only difference is in the feathering appearance. They are accepted in several colors; buff, black, black-red, brown-red, blue, Columbian, cuckoo, duckwing, Pyle, red, spangled, and white.

There are also other colors as breeders are experimenting with color patterns continuously. However, those listed above are the most common.

Frizzles come in standard and bantam size, with bantam seemingly more popular at the current time.

Aside from looking like a sweetie, the Frizzle is a sweetie. They have a sweet, friendly, and gentle disposition. They are quiet and docile and tolerate handling very well many of these little darlings become lap chickens and live a life of spoiled luxury.

With that being said, there is a broad spectrum of the temperaments you may encounter with this fancy breed. The character can also be determined in part by which kind of breed the adult frizzle was bred to.

Some of the characteristics of the non-frizzle may show through.

While the Frizzle is an intriguing ornamental breed, it is also reasonably high maintenance. In a way, it’s the Golden Doodle of the chicken world. A beautiful breed with intense grooming and hygiene needs.

The Frizzle has unique needs in severe weather conditions (if it’s cold, hot, or if they get wet, for example).

So if you aren’t one to spend extra time ensuring your Frizzle is groomed appropriately, then consider opting for an easier breed, like the Dominique, for example.

Known in many countries as a show bird, the Frizzle is not well known for its’ egg-laying ability. It is described as poor to fair in the laying department.

They are not prolific layers, but they will give you around 120-150 cream or tinted eggs/year. This equates to about 2 or 3 small to medium eggs/week.

They do go broody occasionally and prove to be good mothers also.

The chicks can be a little slower than regular ones are feathering out, so they may need more time in the brooder. 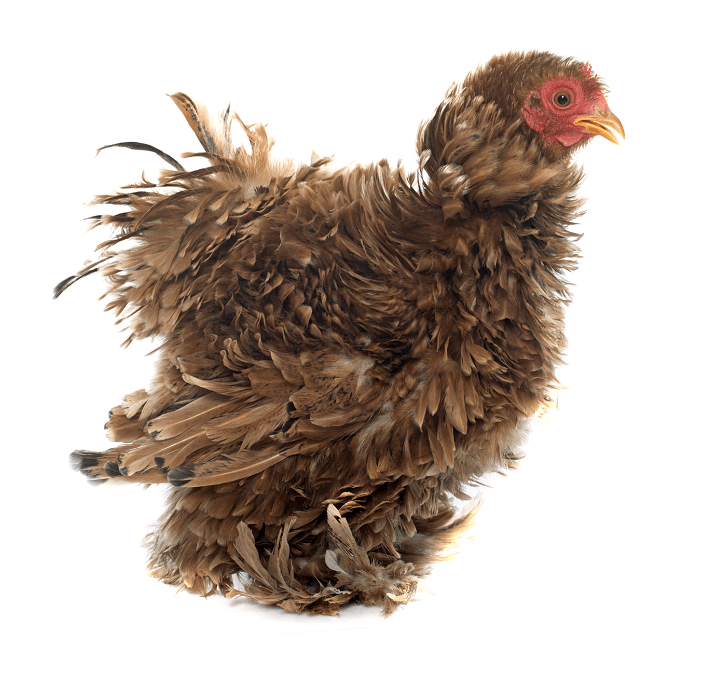 Frizzles do need some special attention because of their feathering. Since they cannot fly, they should have perches set lower down to access them. Otherwise, they may ‘pile up’ together on the bedding.

If you decide to free-range them, the area should be predator-proof as they cannot fly up and away from danger.

Although people who keep Frizzles say they are hardy, in extreme cold, they should be carefully monitored as the feathering does not insulate as well as regular feathers do. They should avoid rain and snow exposure in excess for the same reason.

Any inclement weather – heat, cold, rain snow are all a bit of a challenge for Frizzles.

The feathers do a poor job of keeping the chicken at a constant body temperature, so you should ensure their wellbeing.

Occasionally, head feathering can interfere with vision, so the feathers may need to be trimmed slightly at the tips. You should cut them just enough to allow them to see.

Cutting the tips off the feathers to allow the bird to see is not acceptable if you exhibit your birds.

If your birds are exhibiting signs of nervousness, fly into a panic when you enter the coop or touch them, it may indicate they cannot see well at all due to their head/facial feathers.

Try whistling, singing, or simply talking to them as you enter the coop so that they know that it is you and not Mr. Fox!

Is The Frizzle Chicken Right For You?

Many people who keep Frizzles are enthusiastic about their quirky little birds! The Frizzles seem to be very friendly and happy birds – they are also relatively peaceful and calm.

They are family-friendly birds. Kids love them! Your neighbors will be asking you where you got that ‘funny little bird’ too.

In many countries, they are kept primarily as a ‘show bird,’ and they do very well in the arena. They tolerate handling well and seem to enjoy all the fuss around them.

Since they can be bullied easily by more assertive breeds, you will need to watch for feather picking and other such behaviors closely.

If it becomes severe, you will need to separate your Frizzles from the main flock. They do well with other gentle breeds such as Polish or Cochins.

Frizzles are a charming and delightful addition to your flock. They are non-aggressive birds that are content to either free-range or hang out with the other girls in confinement.

As exhibition birds or ‘lawn ornaments,’ they are hard to beat, but they have much to offer in the way of gentle, quiet companionship.

Many folks keep these little darlings as ‘house chickens’ because they are so well behaved!

If you want a bird that seems perpetually happy, non-demanding, and a delight to look at, the Frizzle has it all!

Do you keep Frizzles? Let us know in the comments section below…

READ NEXT:  44 Beautiful DIY Chicken Coop Plans You Can Build 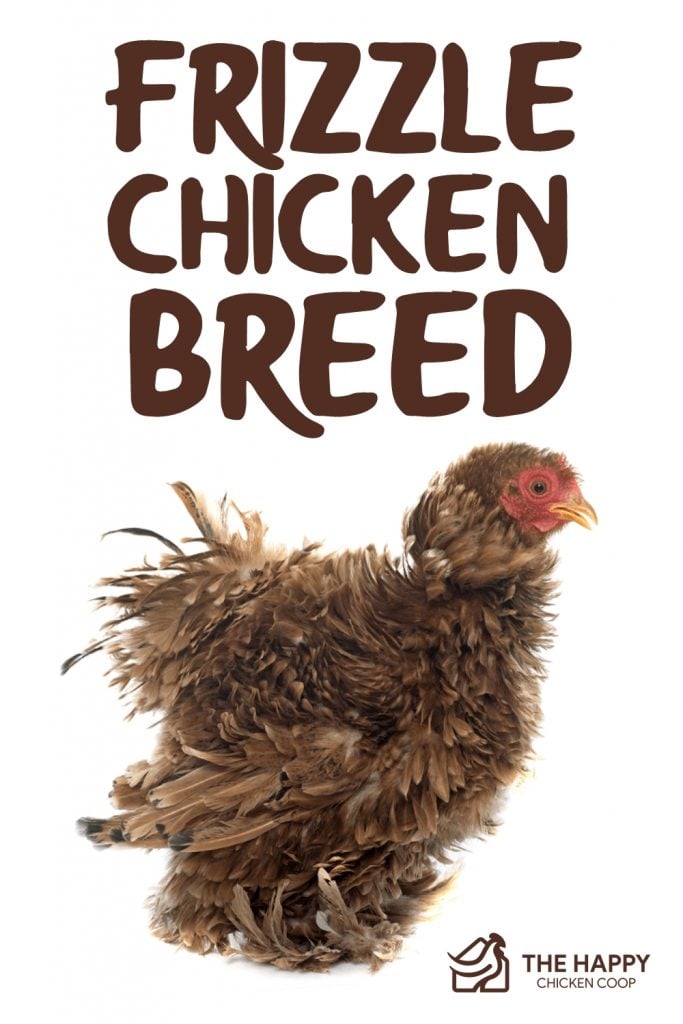