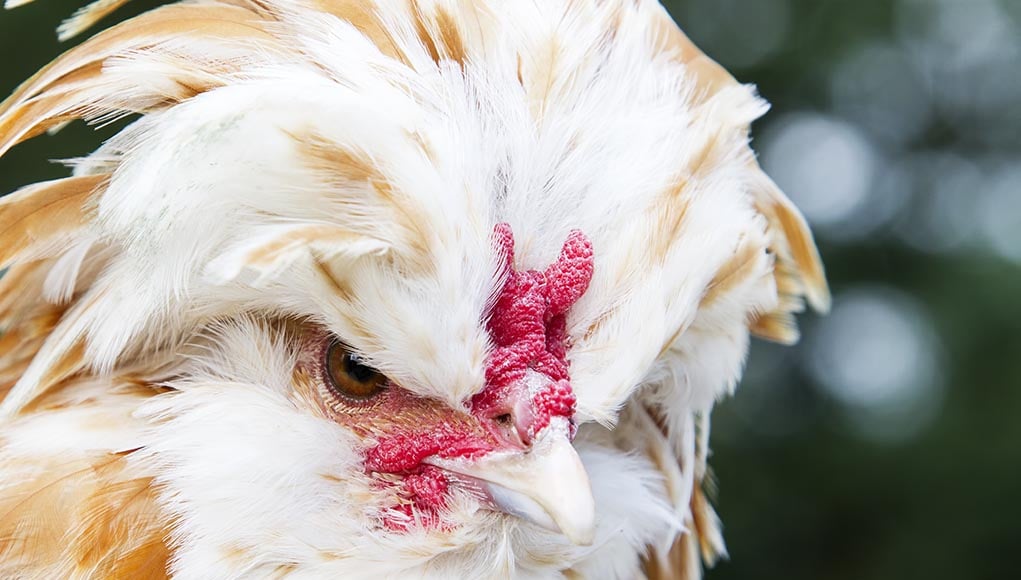 Are you ready to meet with a fun, friendly, quirky chicken with personality and good looks? Well, wait, no more here they are! The Polish chicken has a long history, with much of it lost in the mists of time.

It has become beloved by ‘chickenistas’ worldwide.

There really isn’t another bird that comes close to being as outrageously blessed. Blessed with head feathers that are unique in that respect.

In this guide on polish chickens, we discuss their temperament, egg-laying capabilities, recognized varieties, and also how to establish if it’s the right breed for you.

History of the Polish Chickens Breed

My favorite is that in 1736, the King of Poland was unseated and fled to France. With him, in his ‘luggage,’ he brought his beloved Polish chickens.

They became the darlings of French society at the time, being loved by the French aristocracy, and from then on, their future was assured. As romantic as this might seem, it is doubtful to be true.

The truth is probably more mundane. The first real mention of them comes from the Netherlands, where they were possibly imported from Spain. It is thought that the name Polish was derived from the old Dutch word ‘pol’ for a large head.

It was initially imported as a good white egg layer but was later surpassed by the white Leghorn for superior egg-laying. 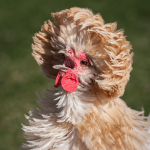 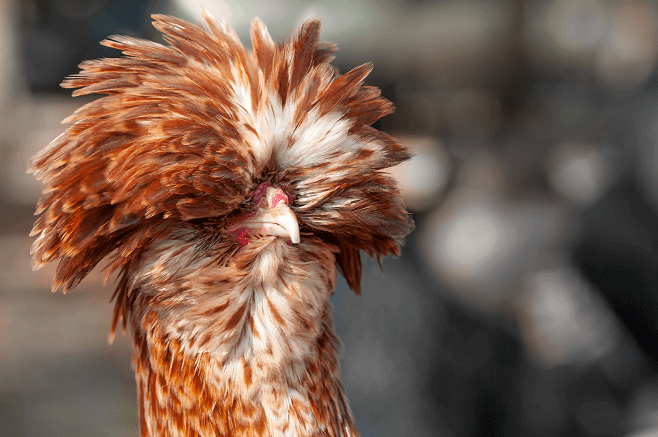 Its reputation as a good layer was eclipsed by its unusual appearance and became an ‘ornamental’ breed and was bred for appearance rather than eggs.

Polish comes in standard and bantam size, and the American Poultry Association recognizes both in their standards book. The Polish are classified as a ‘Continental’ breed.

The types, colors, and year of recognition by the APA are as follows:

It’s a stunning mix of white, brown, and black – a real head-turner. The APA does not yet accept this color, but I think it’s only a matter of time.

Needless to say, there are many different color mixes and varieties around, but if you want a bird that conforms to the APA, you will have to stick with the colors noted above. 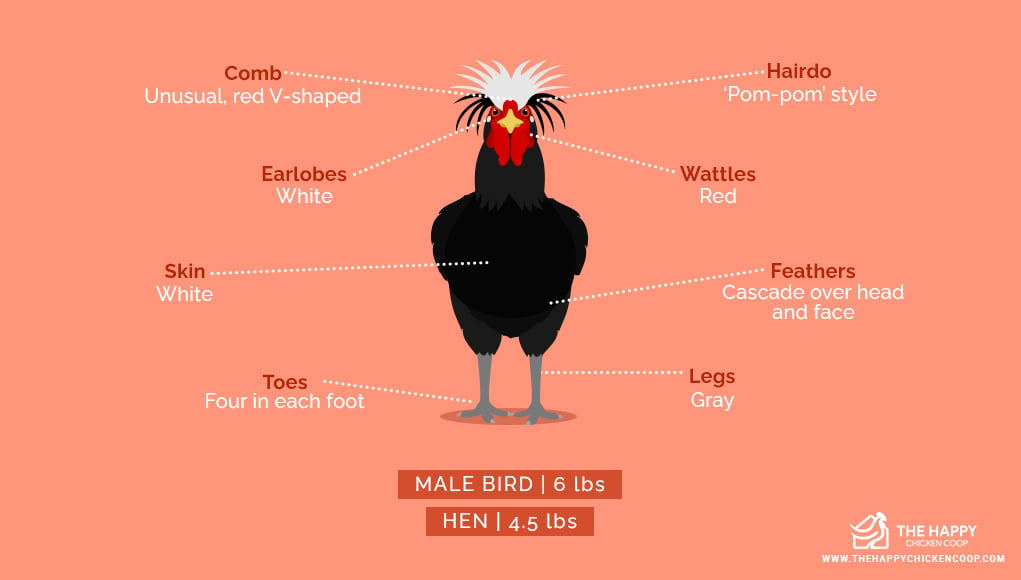 On the other hand, the roosters look like a ‘wild thing’ with the feathers giving a ‘bad hair’ day impression! Both sexes’ head feathers grow up and then cascade over her head and faces, sometimes causing visual problems.

The head crest is supported by a bony prominence that arises from the skull.

The rooster has the unusual, red V-shaped comb, which often gets lost in his head feathers. Earlobes are white, and wattles are red.

The coloring of the legs is gray, and they have four toes to each foot. The feet and legs should not have any feathering.

The male bird can attain a weight of around six pounds, while the hen is usually around four and a half pounds. They are white-skinned birds.

If you want a reliable daily egg layer, it would be wise to choose another breed since the Polish are so variable.

In general, they lay a fair amount of white, medium/large eggs. The average is around 150 eggs per year. As we have already noted, they will rarely brood, although it is not unknown.

I could not find any information on the mother hen’s parenting ability, so I assume it’s a fairly rare occurrence!

Is The Polish Chickens Breed Right For You?

The Polish really shines in the show or exhibition area, whether it be your local agricultural show or a top poultry show. If you think you might like a bird that is a pleasure to work with and sure to attract many comments, this could be your ideal bird. 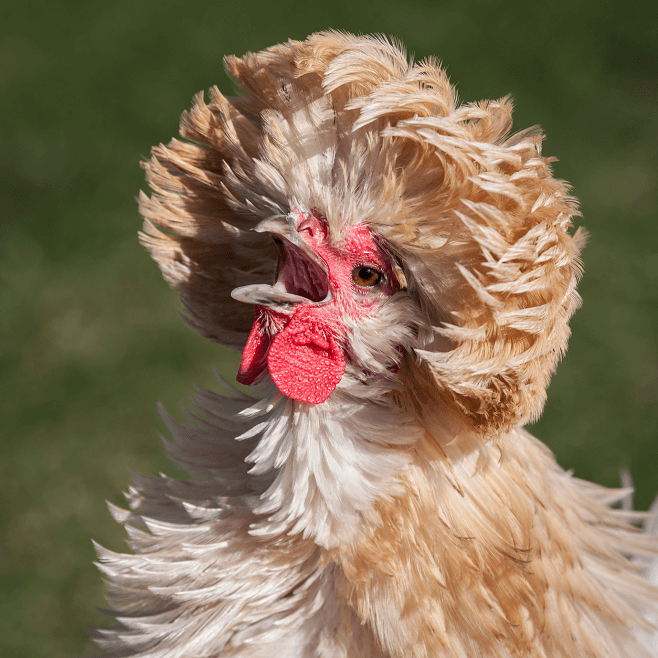 Although buying a ‘show-line’ bird is expensive, there are many Polish out there that are inexpensive to buy and can be show quality birds – you have to shop around after doing your homework on the ‘standard of perfection for the Polish.

You need to know that much work goes into preparing birds for the top shows, but the local county shows are a bit more forgiving. These are the places to start to get a taste of all that is involved.

If, on the other hand, you want a bird for the kids’ 4H project that is easy to work with and docile, not inclined to peck or have ‘temper tantrums, the Polish could fit your needs very well.

The 4H projects emphasize ‘hands-on’ learning, so having a bird that can be handled frequently and thrive is a true blessing.

The majority of folks buy Polish for their backyard flock as something ‘different. They are a bird sure to make you smile when you see them! They are good to raise with small kids in mind because of their gentle nature, and children seem to be unable to resist holding and cuddling them – all of which the Polish hen will tolerate very well.

This breed bore confinement very well, and due to its inquisitive nature and impeded eyesight, it’s probably best kept penned for safety. It will certainly need dry quarters for the winter months. The head feathering can be a big issue once they get wet and then freeze.

You Want An Egg Layer

The Polish are not well known for their egg-laying ability these days, but they do lay a good number of eggs in general, around 200 eggs/year.

It takes them a while to get into the swing of lying, but they can lay pretty consistently once they do. If you want an egg-laying machine for your flock – the Polish is not it!

If your home flock is packed with assertive breeds such as Rhode Islands, Welsummers’ etc., the Polish may be picked on. They tend to be low in the pecking order because of their docile nature and good temperament – and pulling the head feathers seems to be irresistible to some birds!

Due to their visual impairment, the Polish are not equipped and other breeds for free-ranging lifestyles. While they enjoy foraging, they are easy targets for predators as they cannot see them as they attack.

Finally, the head feathers are especially prone to lice or mites’ infestations, so the hens need to be checked regularly before the problem becomes especially troublesome.

The Polish are generally said to be a calm and gentle bird, suitable for children to have as pets.

They can be nervous and flighty, but this is usually attributed to the bird’s head feathers’ visual problems. Talking or whistling on your approach to the bird will alert them that you are coming, and they will be less inclined to startle. 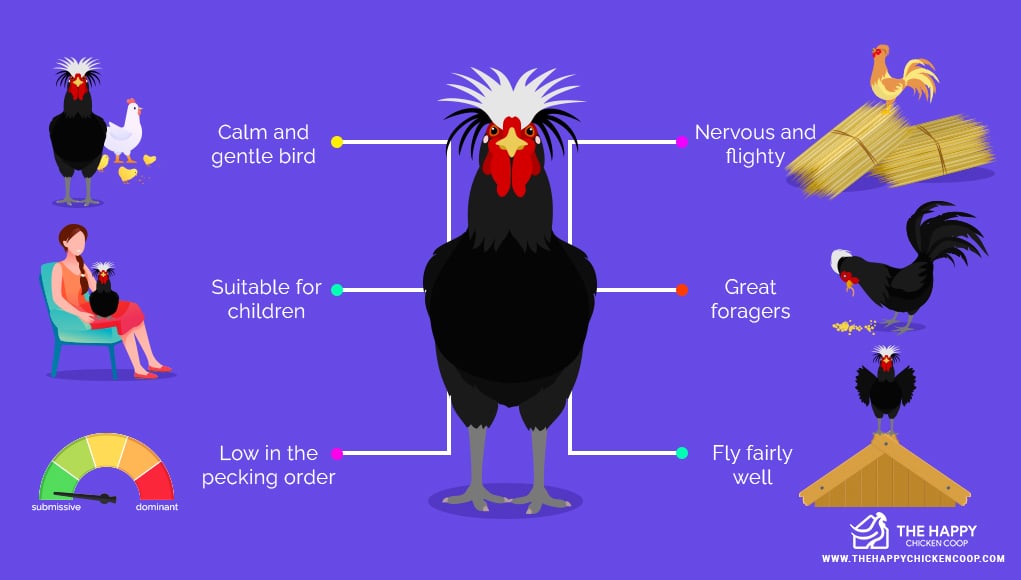 Trimming of the feathers around the facial area is frequently necessary for the wellbeing of the bird, not only for the ability to see predators but also to keep feathers out of the eye, leading to an eye infection.

Although many Polish are bred purely for exhibition or ‘eye candy, some breeders have chosen to remain truer to the birds’ origins. These birds are more likely to be better layered and tend toward some broodiness.

They are inquisitive birds who like to investigate things, so they can end up ‘stuck’ somewhere and require assistance in getting out. Because of this, they are better kept in confinement which they tolerate really well.

If they get separated from the flock and cannot see the others, they will often cry out and respond to the other hens calling them.

They are low in the pecking order since they have such a mild and calm temperament. Most other chickens can’t resist pulling those head feathers, leading to bald chickens….or worse.

Many breeders move their flocks inside a draft-proofed building in areas of freezing and damp winters.

They can be kept in most climates, special consideration must be given to their loose feathered areas (such as their bouffants). Ensure they do not become wet and frozen in the winter. Freezing feathers can cause hypothermia and frostbite.

If you live in a cold climate, it’s best to keep this bird inside during the severely cold months.

The chicks need to be carefully watched for the first few weeks of life due to the bony head prominence. This prominence does not knit together immediately, so one well-aimed peck to the head could kill or seriously injure the chick.

The crest and beard, if present, should be checked frequently and regularly for infestations of lice or mites and treated accordingly. Feathers that impede vision should be trimmed lightly so that the bird can see.

If you show or exhibit your birds, cutting the feathers will not be feasible during show season.

Folks who show their Polish take great pains and a lot of time. They prepare their birds to be looking their finest on the judging days. If you think you might like to get into showing your birds, contact the Polish Breeders Club.

These birds’ docility makes them great project birds for kids to show in local county fairs since the Polish are always a bird that will attract looks and comments from visitors.

Summary of The Polish Chickens

They may not be prolific egg layers. But they are certainly worthy of a spot in your flock for the visual appeal alone.

They are currently listed as a ‘watch’ status on the American Livestock Breed Conservancy. This means their numbers are low and are being carefully monitored.

We hope you will consider adding this beautiful bird to your ‘must have’ list.
Learning how to groom your chicken and be ready to maintain their hairdos.

Polish is a fun chicken to have in your flock. While flighty, they are a great conversation starter for those looking to decorate their flock with this ornamental breed.