Aggressive Rooster: How to Train Him to be ‘Mr. Nice Guy’ 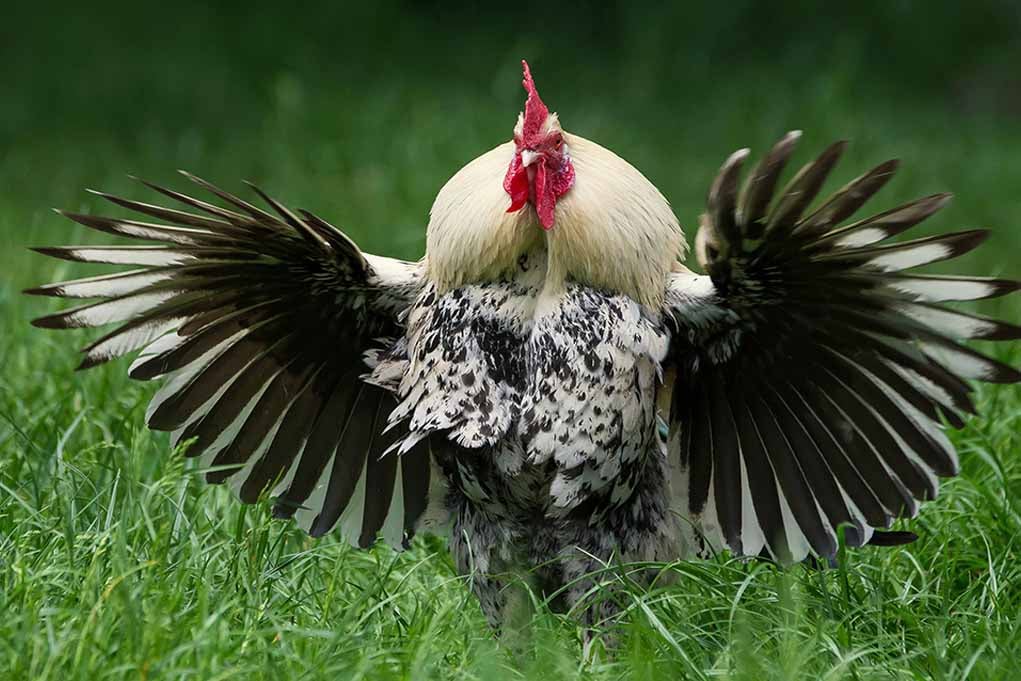 We constantly hear of roosters that are mean to the hens and their keepers. Today we will give you a few tips on an aggressive rooster and how to make him a ‘Mr. Nice Guy’.

That means you’re going to learn how to tame your aggressive rooster!

It will take some time and patience, so have a good stockpile of both.

We have had a few roosters, and most of them haven’t been any trouble at all.

They have been respectful of people, good to the ladies, and rarely requiring any ‘behavior training.’

There was one rooster, though, Fred, who resisted all efforts at been trained. He flew at my partner one time too many – you can’t win them all.

Please remember that these ideas may not work with your particular bird – use common sense with these ideas. The plan is not to get hurt.

Below, I’m going to share why roosters can become aggressive before sharing my rooster training program with you!

From Chick to Aggressive Rooster

When the chicks are small, although the boys may be a little stand-offish, they can be held, cuddled, handfed and cosseted.

This is a great time to lay the foundation of respect and dominance for your little roosters.

You may think it’s cute if he pecks at you – it’s not. He is trying already to be the boss.

Pick him up, especially in front of the hens, talk to him, feed him from your hand if he will, and then put him down.

Somewhere between 16-20 weeks, hormones can upend this idyllic period.

Suddenly he is a rooster full of testosterone and needs to defend his territory and his flock; interlopers beware – and that can mean you!

It is not personal – it’s just the way roosters are wired, and just like a human teenager, he is testing the limits.

If you have raised the rooster from a chick, it is usually easier to manage them and teach the rules as they go along.

If you have been given or acquired a rooster, it can be that much more difficult.

A lot will depend on how the bird was raised and, of course, the breed.

Why Do Roosters Attack? 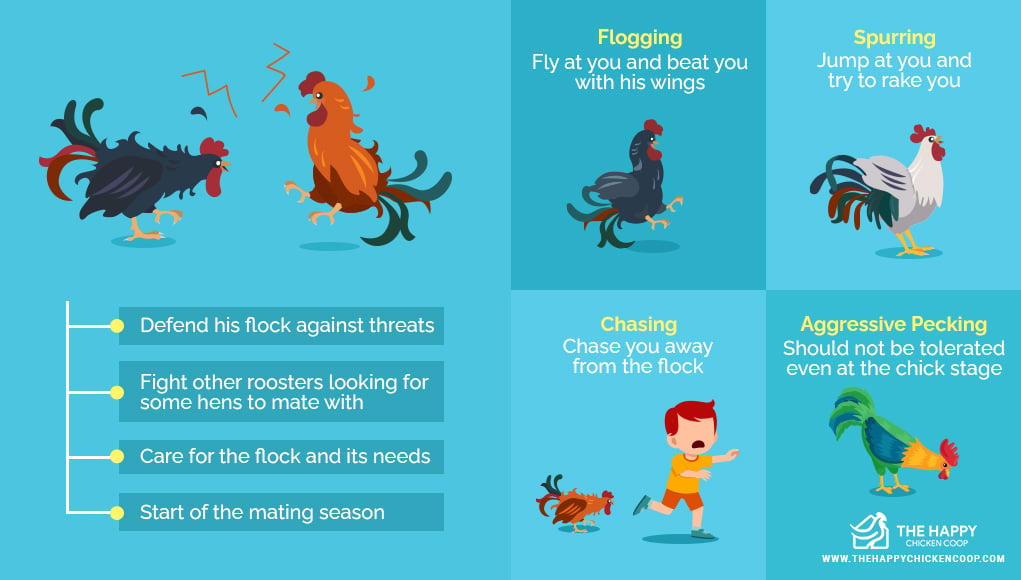 He would defend his flock against threats from predators and other roosters in the wild, looking for some hens to mate with.

His responsibility is to care for the flock and its needs, including mating with as many hens as he can manage to ensure the flock’s success.

You will need to bear in mind that aggressive behavior will likely increase in the springtime because it is the start of the mating season.

We are just going to mention some terms here that you may have heard but aren’t sure of:

Watch for the ‘Moves’ in an Aggressive Rooster 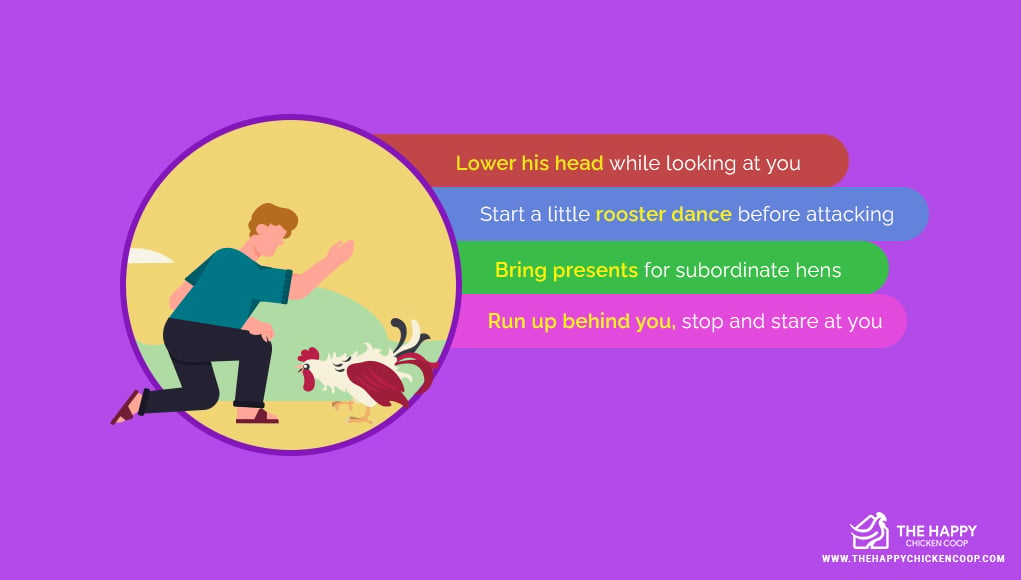 There are certain signs that a rooster is contemplating an attack. We will share them here but be aware that the rooster is the master of the sneak attack!

He will lower his head while looking at you; he may start a little rooster dance – attack is imminent, be ready.

Your rooster might try to bring you presents – very sweet, but he only does this for subordinate hens, beware.

The silent stealthy running up behind you, stopping and staring at you.

A challenge has been issued. Stand your ground, stare back.

How to Train Your Aggressive Rooster to Be ‘Nice’

Ideas on training roosters are many, some good and bad, and plenty of dubious ideas abound on the internet.

I have read of roosters being booted around the yard, having their spurs cut off, and other little horrors visited upon them – this is abuse. Would you please not do this to your roosters? If you feel the need to call him, please do so in a humane way.

When moving around your flock, your movements should be deliberate and fairly slow-paced.

Moving quickly unsettles them, putting them on edge – more so the rooster.

Animals think rationally – they cannot afford to make the same mistake twice – it might get them killed. 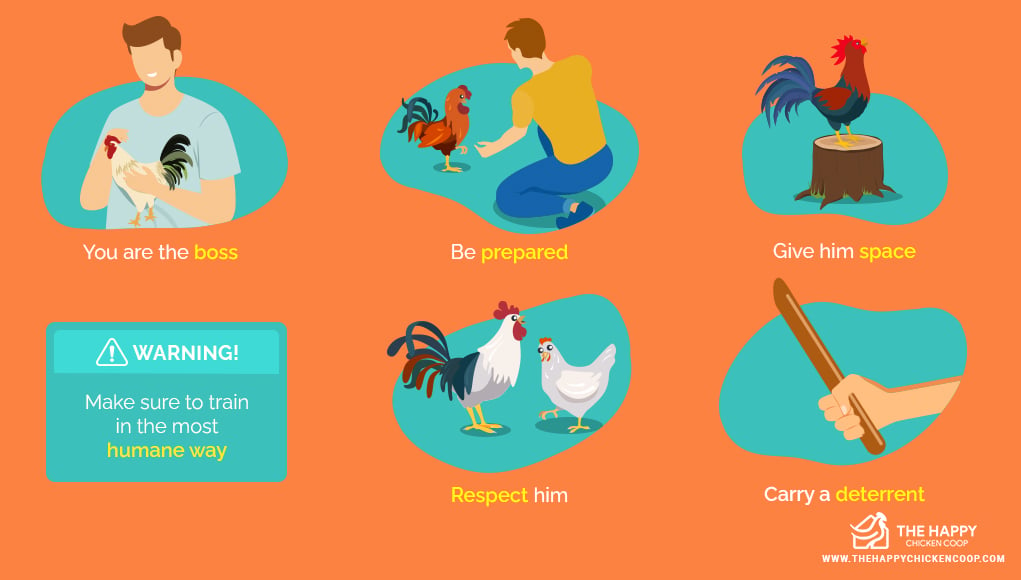 Remember, each person who tends to the flock and deals with the rooster will have to follow your lead, no variations in how you treat him.

If you give confusing signals, he will be unsettled and may read ‘attack’ into a situation where no attack is intended.

Running The Aggressive Rooster Down

Some folks recommend that you ‘run them down’ – that is, walk right through them without stopping. The idea is to get the rooster to move – he may interpret this as an attack and possibly counterattack – not a good thing.

Take one large step into his space while staring him down. He should back up, start fidgeting, and he will look towards the ground. You won – walk away slowly.

Do not be afraid – this is a hard one for many folks. After all, no one likes to be flogged by a rooster!

Fear is a weakness in the animal kingdom and will be exploited to the full.

Even if you are frightened, do not run or move away from him – he needs to move first.

If he starts up with you, don’t move away.

If he drops his wings and spreads them slightly, ready for attack – do the same.

Spread your arms, staring directly at him, and take a step into his space. If he is smart, he will back off.

At this point, some folks will pick him up and walk around for 10-15 minutes to re-affirm who the boss is.

Do Not Hurt Him

I cannot overemphasize this.

Yes, you can control an animal by fear, but it doesn’t make them respect you.

In fact, it can make them meaner.

If you can get him to respect you and your position as alpha, an attack is much less likely.

I have read of people turning the rooster upside down and walking around the garden with him like that. This is dangerous for the rooster – because of the anatomy of a chicken, it is possible to cause the air sacs to collapse and have him suffocate – especially if he has just eaten.

Would you please not do this?

It would help if you remained calm, quiet, and assertive during your interactions with your rooster.

Consistency with your interactions is also important.

Wear as much protective clothing as you think you may need. Long boots are recommended and a long sleeve shirt too.

Be warned, though – it doesn’t work on every rooster. At least you will know you have tried to teach him some manners!

Much of your success (or failure) will depend on things out of your control, such as genetics.

To put things in perspective, remember that roosters were not born to be ‘lap pets’ – it is against their natural behavior.

When you buy your chicks or adult fowl, ask if there are any aggressive tendencies in the flock.

Of course, just because the breed is considered non-aggressive, it doesn’t always follow that the particular birds you have will stay true to type. Chickens are individuals so that that personality can vary greatly.

Children should always be kept away from roosters unless a responsible adult is there to supervise.

Lastly, please remember your dominance can be kind; there is no need to be mean or harsh with your 7lb. Rooster. Things such as treats, hand feeding, quiet talking, and picking him up can help to establish your relationship with him.

Even if he does not accept these things from you, you can reinforce your ‘alpha’ dominance without resorting to cruel methods.

Working with your rooster will take time and effort on your behalf. If you cannot devote these two things, think about re-homing or culling the bird.

He will likely never be a cuddly fellow, but that is not the aim. An aggressive rooster needs to be a defender of the flock but subordinate to you. He may need reinforcement of the idea periodically, but you should both be respectful of the other space in general.

We hope you are successful with your rooster’s training program!

READ NEXT: How To Deal With A Loud Rooster

Have you had to deal with an aggressive rooster? How did you do it? Would you please let us know in the comments section below? 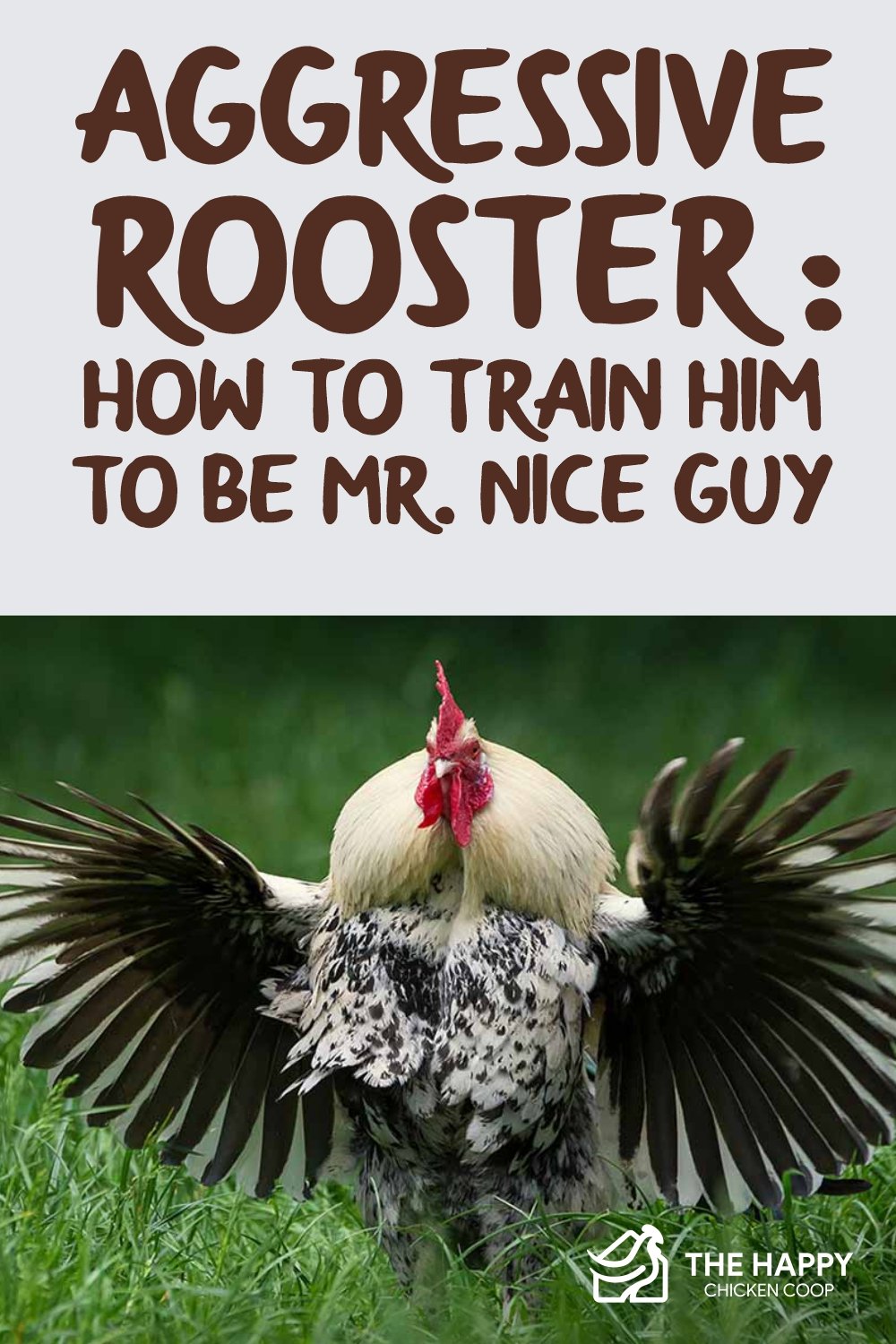 76 thoughts on “Aggressive Rooster: How to Train Him to be ‘Mr. Nice Guy’”