Sumatra Chicken: Everything You Need To Know 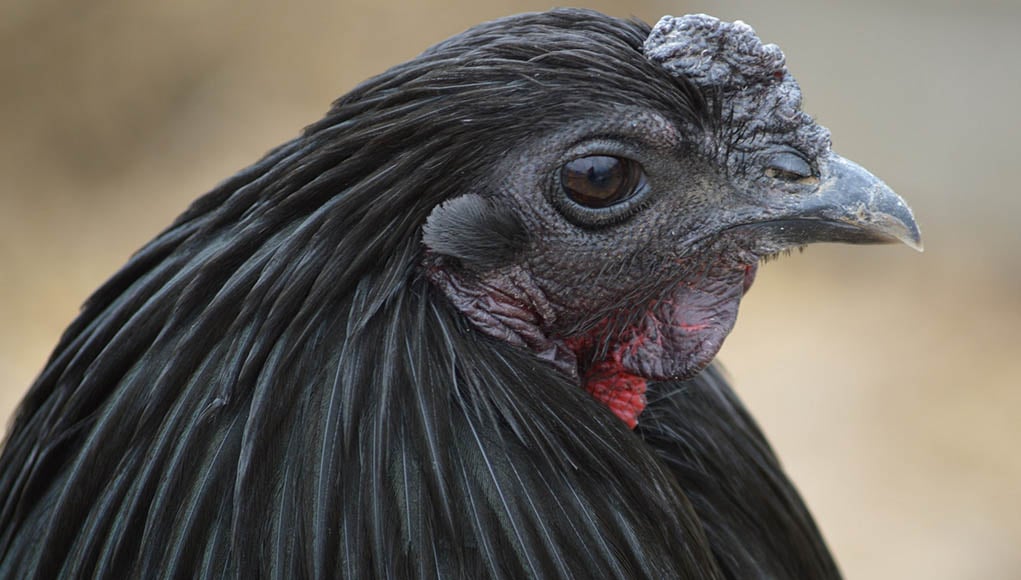 The Sumatra chicken is a rare breed with an exotic and somewhat mysterious past.

The mystery behind its genetics and origin only adds to the allure of this elegant little chicken.

With a history that will keep you on the edge of your seat, this small breed has plenty to uncover for those interested in raising the Sumatra chicken.

Read on to unravel the rich history of the Sumatra chicken.

The History of the Sumatra Chicken

When researching the history of the Sumatra chicken, one of the first things to note is the many alternative names that the breed goes by.

Once called Sumatran Pheasant, one might wonder if Sumatra is a chicken after all. Some of the first-known literature on the bird expressly referred to the Sumatra chicken as a pheasant.

In fact, some believe that the Sumatra chicken evolved from other types of fowl, which would account for all of its alternative names.

Regardless, the little blackbird from the jungles of Sumatra is indeed a chicken.

And because Sumatra originated in the Isles of Sumatra, including Java and Borneo, it is also referred to as the Java Pheasant Game Bird.

The early recordings of the Sumatra chicken emerged in the 1850s. Amazingly, this jungle fowl was first imported to the US in 1847. In other words, the passion for this breed caught like wildfire.

According to the Livestock Conservancy, in the 1880s, Sumatra was also showing up in Germany, where it was called the Black Yokohama.

Like many wild game birds in the 1800s, the Sumatra chicken was used as a fighting bird, but it wasn’t the best bird in the ring. Regardless, Sumatra was a favorite for crossbreeding with other noteworthy fighting chickens.

Finally, in 1883, the Sumatra was introduced to the American Poultry Association… and so it was official.

Luckily, today, Sumatra is mostly kept as an ornamental show chicken rather than a fighting bird. Whether or not the chicken is descendent from a hybrid of another jungle fowl, we may never know. 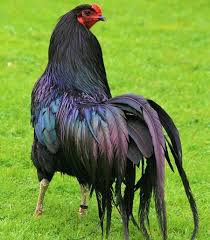 In its natural environment, the Sumatra chicken’s feathers were mostly black, with some red-breasted colorations.

However, today, Sumatra’s standard color is a deep black with a hint of green (beetle) sheen.

Curiously, the Sumatra, much like the Silkie and the Ayam Cemani, has black skin and bones.

And while the little Sumatra isn’t a plentiful meat bird, it does look quite beautiful on the dinner table.

The pigmentation doesn’t stop at just the feathers, skin, and bones, however, the chicken’s shanks are also black!

The bottom of Sumatra’s feet is yellow…quite a contrast in color.

As if that’s not enough, Sumatra’s face color ranges from purple to black, which makes it appear all the more mysterious and stunning.

Today, you can also find the Sumatra in two other color varieties, Dun and Blue. 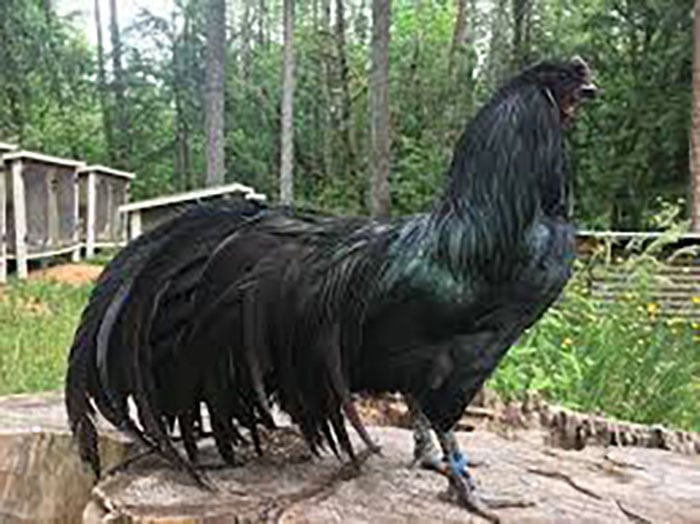 Remember how some have referred to the Sumatra chicken as a pheasant?

Well, it’s not just because of the mystery behind the origin of the breed; it’s also due to the fact that it looks similar to a pheasant. Most notably due to its upright posture.

In truth, the Sumatra chicken maintains its wild appearance, as though it were still thriving in Indonesia’s jungles. Its straight posture and ready-to-fly appearance reflect its behavior (ready to fly and flighty).

Aside from the beauty of the bird’s pigmentation, the Sumatra also has gorgeous flowing tail feathers. These feathers are often long enough to trail behind the bird, as though it has a long tail.

The comb on the Sumatra is a pea comb, just like the rest of the bird, dainty and small.

But just when you might think there aren’t anymore unique features to admire of the Sumatra, you’ll notice it has one other little quirk; a characteristic that is unique to only a handful of chicken breeds…it has multiple spurs.

It isn’t clear whether the multiple spurs were a characteristic that was promoted and developed by cockfighting enthusiasts or if the additional spurs were present in the Sumatra chicken’s natural jungle habitat.

As mentioned previously, the Sumatra chicken is a small breed with roosters weighing in at a whopping 5 lbs, while hens tip the scale at about 4lbs. These tiny weights qualify the Sumatra as a Bantam.

With that being said, the Sumatra Chicken was, and is, recognized by the American Poultry Association as a standard breed. 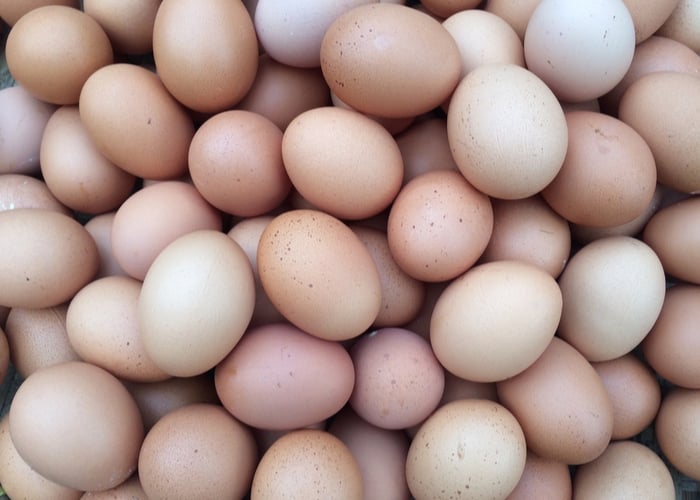 The Sumatra chicken, as you might have guessed, lays very small eggs. However, a hen can lay up to 100 white eggs a year.

What’s more, this little hen doesn’t necessarily slow down egg production during the winter months, as long as they are happy and healthy.

On the other hand, if you’re hoping your hens go broody, and will raise their own chicks, you’ll have to practice a bit of patience.

Sumatra hens don’t go broody often; when they do, it’s usually a seasonal occurrence due to their original environment.

So, if you plan to let your little hens raise their chicks, keep in mind that Springtime is the best time for this little chicken to go broody.

Sumatra is a fascinating, natural, breed. In other words, it maintains its natural instincts and tendencies.

For example, Sumatra prefers to spend much of its free time under shrubs and areas that provide protection from predators.

Most chickens behave similarly, but Sumatra takes its evasion methods a step farther than other breeds of chickens.

The Sumatra moves intentionally from one bush to another, carefully foraging while keeping an eye on the sky.

And speaking of sky, this little chicken is one of the few members of the poultry family that can fly a reasonable distance,

In fact, it’s been said that Sumatra used to fly from one Indonesian island to another. This may also lead a new Sumatra chicken owner to carefully consider their enclosures when planning how to contain this little flier.

Planning ahead for this breed is undoubtedly something chicken fanciers will need to do.

Aside from Sumatra’s ability to fly better than most chicken breeds, it’s also a flighty little bird.

In other words, the Sumatra chicken is skittish, nervous, and generally not as friendly as some of the other breeds.

Despite their reputation for flightiness, however, there are always variances within the breed.

Of course, how you raise your chickens can make all the difference as well.

Sumatra Chicken as a Free-ranger

If you’re hoping for a flock full of free rangers, then the Sumatra should be a part of it.

Most of the smaller breeds of chickens aren’t cut out for life in the fast lane, but this little jungle chicken has all the makings of a tremendous free-range chicken.

The Sumatra is alert and has the ability to fly farther, and higher than most standard domesticated chickens.

In other words, Sumatra can hide easily from both aerial and ground predators. Their pheasant-like behavior makes them more aware of their surroundings.

Their safety tactics often include hiding out in underbrush, or flying to safer ground, if needed.

In fact, Sumatra does much better in a free-range setting than in confinement. They are great foragers and roost in intentionally safe places (mostly because they can reach heights that the heavier breeds cannot).

Most standard breeds would love to roost as high as a Sumatra chicken can; they just aren’t as light nor agile

With that being said, the Sumatra chicken is still a small breed, and that means it is easier for a hawk to attack and kill it if it can catch the little bird.

So caution must be taken when deciding to allow such a little bird to free-range.

While the Sumatra can be kept in cold regions, it thrives the best in an environment that mimics its historical origin.

Because the Sumatra chicken is from the far east, initially, it prefers to live in a warm climate.

However, with the right coop setup and winter-weather precautions, there’s no reason someone living in the northern hemisphere couldn’t raise Sumatra chickens. 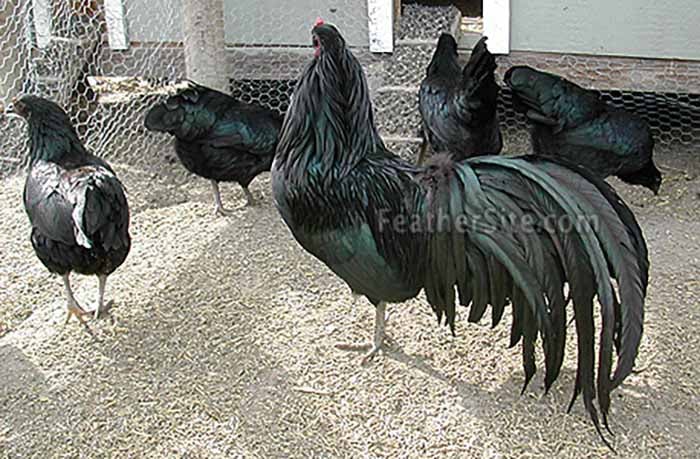 The Sumatra chicken was originally captured from the wild and used as a fighting bird for entertainment purposes.

Breeders then imported the Sumatra to other countries, like the United States, and Germany.

The Sumatra continued to be promoted and developed for use as a fighting chicken before it was appreciated for its beauty.

You will see that today, the Sumatra chicken is largely kept as an ornamental or show breed. Game birds are not bred for the fighting ring anymore, and instead, they’re kept as pets.

All-in-all, the Sumatra chicken is a beautiful breed. They have a rich history that has evolved over the years into something quite beautiful.

It’s perfect for someone who wants an eye-catching, rare, breed to either show off in the ring or admire during their morning chores.

Either way, the breed is certainly something to behold. 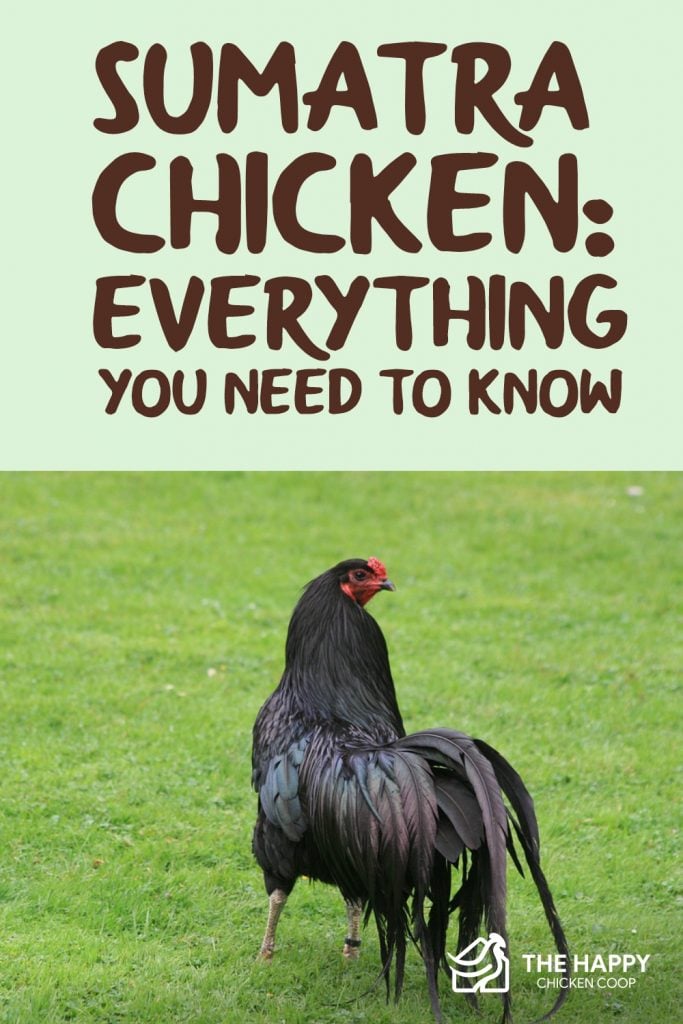 6 thoughts on “Sumatra Chicken: Everything You Need To Know”