How To Deal With A Loud Rooster 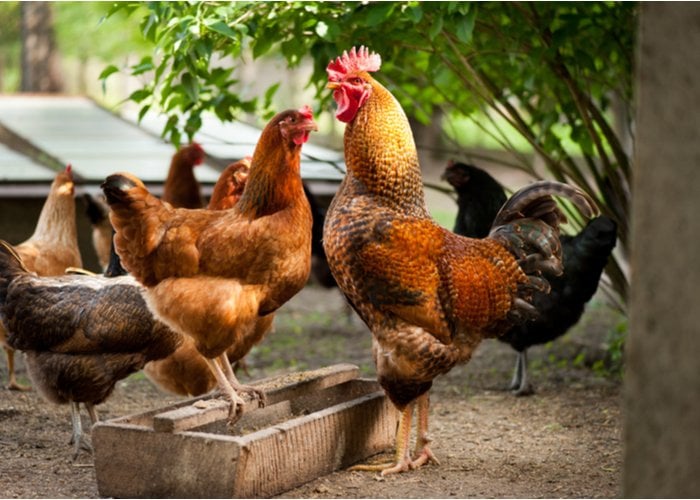 If you’re lucky enough to live in an area where you can have roosters, you probably won’t think twice about the rampant crowing. You wouldn’t be wrong, either! Most areas that are very rural or zoned agricultural are pretty rooster-friendly. So, how to deal with a loud rooster would never be an issue

Though there are a few circumstances that might require you to keep your boys quiet, let’s see the best way to deal with a roosters crow.

If you have to work late and sleep in, loud crowing can be incredibly frustrating.

As well as if you just enjoy sleeping late on weekends, have tired guests, a new baby, or a stubborn toddler, or sensitive neighbors.

A loud rooster can be just as annoying as a dog that barks nonstop!

If you live in a more densely populated area your neighbors may also be frustrated due to the same reason.

If your neighbor works nights and sleeps during the day, a loud rooster can ruin their quality of sleep.

Contrary to popular belief, roosters don’t just crow when they see the sun coming up, either. They can crow in the middle of the night if they’re woken and notice activity.

The biggest reason why you may need a quiet rooster is that you live in the city. Most cities that allow a coop with a few hens don’t allow you to keep a rooster.

If you bought straight-run chicks you may end up with one or more boys and even if you bought sexed chicks, the hatchery may have made a mistake.

Unfortunately, in this situation, you would usually have to rehome or process the roosters.

Lastly, some places allow a rooster as long as he’s not considered a nuisance. If there are too many complaints from neighbors he’ll have to go.
So, what can you do?

Caponization is One Way to Deal With a Loud Rooster

One rather extreme method is called caponization and only works if it’s done young enough.

This is actually castrating the young males, so they never get the hormones that make them crow. It is done by surgically removing the testicles from the young cockerels’ abdominal cavity and kits are readily available online.

However, this still isn’t a sure thing when it comes to crowing! Some capons have been known to crow a little bit, although it’s still generally a lot less.

Capons are often better pets than roosters because they are less aggressive and don’t attempt to breed hens constantly.

They do get larger and heavier than intact cockerels, which is the whole reason for caponization in the first place! They were intended to create a better meat bird.

Want to try it out? Good luck. This surgical procedure is not for the faint of heart and can cause extreme pain and suffering, if not death if done improperly.

Caponization experts are hard to find and you’d be hard-pressed to find a veterinarian that does the procedure. If your cockerel is old enough to start crowing, he’s unfortunately too old for the procedure anyway.

We always recommend letting a rooster be a rooster, and though caponization is a method, we do not specifically encourage this method.

Another method you can use to prevent the early morning wake-up call is to house your rooster in a low cage. If he can’t stretch out his neck, he can’t really crow!

If you’ve ever watched one in action, you’d notice how he has to assume the position to get it out. This is a good method if you’re trying to keep them quiet in the morning, but you can’t keep him locked up like that for very long.

A low cage is uncomfortable and can be inhumane if used for punishment or if you leave him there for more than just overnight.

This method is used for temporary setup or transport of roosters in ordinance restricted cities and localities.

Some people have cages to house roosters overnight that are kept inside the garage and covered with a thick blanket to block a lot of the sounds.

When done right the roosters are safe, have food, water, and space, and result in a very faint crow that likely won’t wake anyone up.

Unlike the smaller, low cage, you can keep roosters in here for longer (if it’s appropriately sized.)

Try a Late Release From The Coop

You can also insulate your coop and keep your flock safely inside until it’s late enough to let them loose on the world.

Adequate insulation will cut back greatly on sounds. If your coop has windows black them out so he can’t notice as much of the world waking up either.

Another option with mixed reviews is the “no-crow” collar. These don’t eliminate crowing necessarily, but they can cut back on the noise.

A cheaper option is to make your own with some Velcro! Sure, he’ll try and carry on like normal, but at least it won’t be as noticeable or obnoxious.

It’s worth a try if you’re out of options, but roosters aren’t thrilled with them. Another method we do not necessarily encourage but is a method used.

Some Breeds Are Naturally Quiet

You can also pick a rooster from a breed that is known to be a little quiet.

Unfortunately, no one has bred a breed with silent roosters yet. Seramas are known to be quiet and, since they’re so tiny, their crow is pretty weenie.

Other bantams are also considered a little quieter just due to size, but some people feel their high-pitched crows might actually carry further. An occasional Rosecomb bantam rooster doesn’t crow much, if at all, but they can be difficult to find.

Other generally quiet breeds of chickens, like Orpingtons, may crow less (but will still crow.)

Reduce the Population Helps Deal With a Loud Roosters Crowing

Only having one rooster around helps, too. The more roosters you have the more competition they have, so you can end up with an endless serenade all day long!

A lone rooster with hens tends to be a bit quieter since he doesn’t have much to prove to the world.

Another tedious option is to discipline the rooster every time they crow but place them in “time out” or give a careful soaking with a hose (weather permitting, of course).

But this requires dedication, lots of crowing, and you also need to be home and available to follow through.

The roosters may learn your schedule and realize they can crow when you can’t get to them. Some people have had luck decreasing the overall crowing amount, but not eliminating it.

The Final Solution to Deal With a Loud Rooster

Finally, if you have a rooster that absolutely will not quiet down you have the option to rehome. It can be easier and more human to let your boy move out to a farm where he can just be a rooster.

Aggressive roosters tend to produce more aggressive offspring, so they aren’t safe to keep for breeding. Despite their small size, they can do a lot of damage, especially to small children or elderly people.

Other roosters have been known to chase visitors and anything on the property it sees as a potential threat.

Talk to Your Neighbors. If you live in an area that allows roosters, but you have neighbors close by, it might be wise to actually speak with them before jumping to conclusions!

Some people enjoy hearing the barnyard sounds of a rooster and actually won’t mind at all. Don’t just assume everyone hates it – you might get lucky! 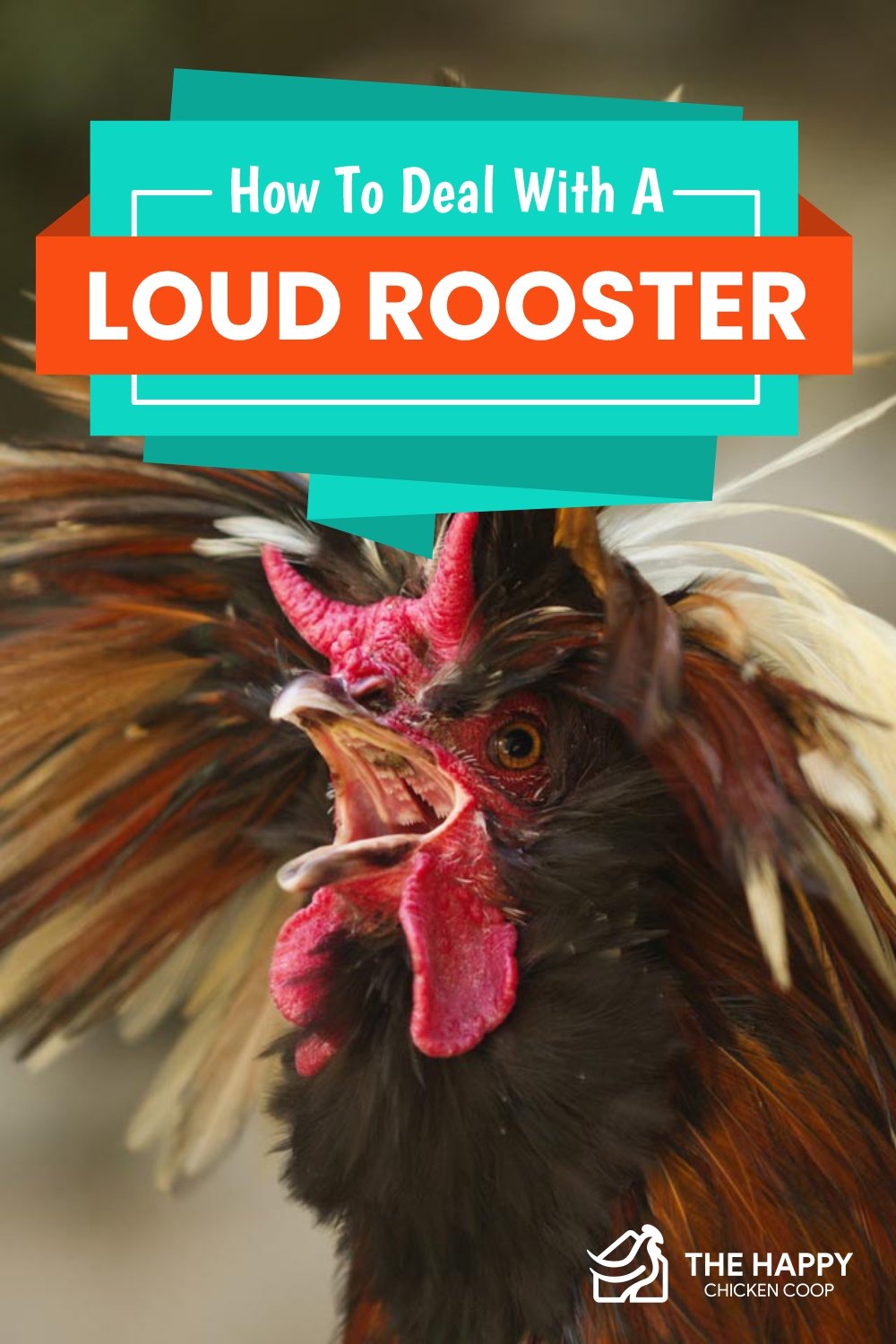 4 thoughts on “How To Deal With A Loud Rooster”