How to Sex Chickens: 5 Methods To Determine Hen Or Rooster

In fact, I have spent many years trying to find the best way to determine who is who in my young flocks.

It is advantageous to know which sex my peeps are if I decide to sell them, sort, or introduce them to my flock.

If I am going to sell, typically, a pullet will go for a few more dollars than a rooster, so rather than selling straight run, I like to tell new owners what they are getting.

I have noticed that when purchasing a straight run, you will most likely get a rooster, as the sexting process will gather the most pullets into the pullets pile where the straight run gets the rest.

Keep that in mind when you are sure you don’t want to deal with many roosters fighting for the pecking order crown!

Sometimes, as mentioned, I like to know early on to envision what my future flock will consist of.

There is nothing worse than having a brood of babes and imagining dozens of fresh eggs only to hear a bunch of teenage crows coming from the coop in a few months.

If you want to increase your egg production even further, and improve the strength of the eggshells, and help your hens through the molting process, here are some treats that we recommend: 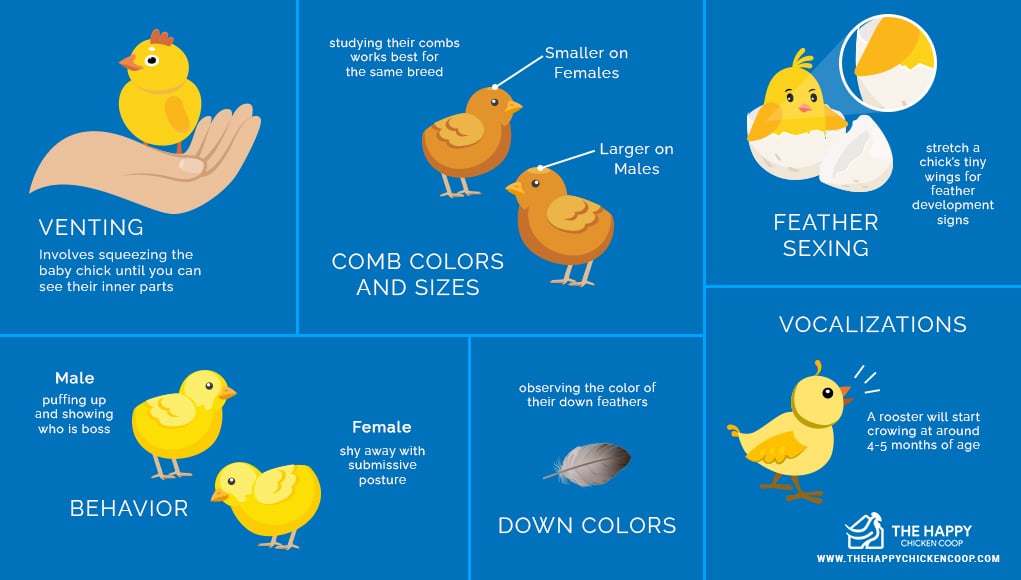 Luckily, there are a handful of tried and true ways to determine the sex of chicks.

I’ve personally tried all of these, and while I have my favorite methods, I tend to use more than one.

Some veteran flock owners swear by one method, and others will consistently trust another.

When it comes down to it, accuracy is often determined by the handler’s skill level, familiarity with the breed, and the breed of the chicken itself.

The most accurate way to determine the sex of a young chick is undoubtedly by observing the chick’s vent.

This is known as “venting” or “vent sexing.”

It is not a simple task, and it requires skill and the ability to restrain a chick without harming it carefully.

Venting is the method that most hatcheries use before shipping chicks.

They take the time to hire professional chick sexers who are experienced and extremely accurate.

Some countries even have schools that focus on chicken sexing.

However, even the top hatcheries, with the best sexers, will not guarantee 100% accuracy.

While venting is one of the most accurate ways to sex chicks, this method can be just as difficult as simply eyeballing a brooder full of chicks without years of experience.

It isn’t for the faint of heart either, as it involves squeezing the baby chick until the feces are expelled, and you can see their inner parts.

Once the inner parts are visible, a small bulb will be visible within the cloaca if the chick is a male. Even the most experienced may miss this small bulb, so it certainly takes years of practice to get this method down.

If you are willing to try this method, a great video shows how to perform the venting and feathering methods. Be sure to watch till the end, where you can see the bulb clearly.

Feather sexing is another easy way to determine the gender of chicks. Surprisingly, female chicks typically have wing feathers before they hatch.

Young roosters do not begin to develop their wing feathers until a few days after they hatch.

I make it a habit to look for wing feathers as soon as I move my chicks from the incubator to the brooder because it won’t be long before the little roos start sprouting their wing feathers.

The odds are pretty good that if the wing feathers are present and vary in length, the chick will turn out to be a happy hen someday.

Determining a chick’s sex by studying their combs is a less invasive way of sexing a baby chick.

I prefer this method because I can observe the size and color of the wattle and come up with a fairly accurate guess.

If you want to learn more about types and varieties of chicken combs, go here.

This method works best if I have chicks of the same breed.

I’ve found it to be more difficult with a broader box of mixed breeds.

For example, if I have a box of rose-combed Dominiques mixed with single-combed Barred Rocks, I may go cross-eyed, trying to figure out the differences.

Cockerels will tend to have more pronounced combs than a hen, even as a young chick.

The comb will stand a tad bit taller, and in some cases, it may appear to be more full than a hen’s comb.

Besides, the color of the combs will appear to be brighter as they age.

This is a great determining factor when they are a month to two months of age.

If I have the luxury of waiting a few weeks to determine the sex of my chicks, I often opt to base the sex of my babies off of their behavior in the brooder.

For example, a young rooster may act more dominant in the brooder by rushing up to my hand instead of hiding in a corner like the young hens might do.

Right out of the egg, some roosters will show their ability to be dominant and protect their hens by puffing up and showing me who the boss is. 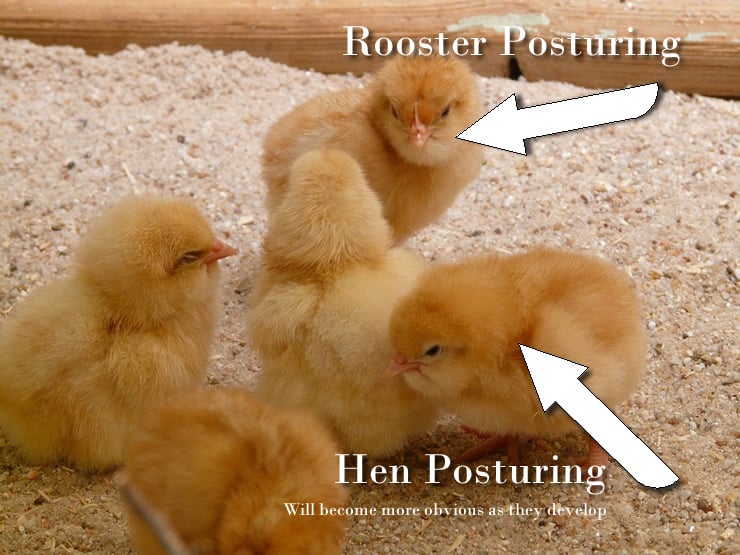 The males will often “ruffle” their down feathers and stand erect when looking into the eyes of another young rooster.

I’ve often observed two little peeps acting like they will fight when they are only a week old. The pecking order is important to them from day one!

Young roosters are often the first to rush to the feed dish and make slight cooing sounds to alert the rest of the babes of the tasty findings.

This is a behavior that they carry with them throughout their entire lives. Roosters take their job of caring for their hens very seriously, and it is interesting to observe their instincts at such a young age.

As roosters develop and age, it becomes easier to observe the behavioral signs, but these little mannerisms are quite telling even as chicks.

If it is important to know the sex of my chicks early on, I make sure to order Sex Link chicks from my favorite hatchery.

You can determine the sex of this type of chick simply by observing the color of their down feathers.

It is important to note that this method’s only time to determine a chick’s sex is if the parents were not the same breed of chicken.

While some people swear that hens can crow (and this may be true in rare cases), this is my go-to determining factor when sexing chickens.

If everything else fails while the chicks are in the brooder, a crow will check the box a few months down the line.

A rooster will start crowing at around 4-5 months of age. At this point, they probably already look like a rooster, so they won’t be too surprised when they start to grow.

One important observation I’ve made when keeping more than one rooster together is that the top rooster tends to mature faster and crow sooner than those on the lower end of the pecking order.

It is almost as if his growth is a bit stunted by the alpha rooster.

Never Count Your Roosters Before They Crow

Unless I have a professional chicken sexer on hand, I never count my roosters before they crow.

If I try to sex a breed that I am not as familiar with, I will most likely make a mistake when sexing until I am more familiar with how the breed develops.

It takes time to become familiar with the differences from breed to breed. Some rooster combs may look similar to a hen’s comb from a different breed at a young age.

If I end up having all roosters in my brooder box, it can become quite confusing because each chick looks the same, and there aren’t any hens to compare them to.

In cases where I have only 3 chicks in my brooder, I usually wait and watch for feather growth to decide about their sex. I’ll watch for hackle and sickle feathers to begin to develop.

I also like to use baby chick bands to mark the chicks that I have identified as males to see how accurate my identification skills are from year to year.

I have only gotten better with practice.

Practice makes perfect—or close to it, at least.

Banding is a great way to distinguish one chick from another as they develop, but keeping up with their growth can be tricky, so I always make sure to change the band as they grow to prevent the chicken’s leg from growing around it.

How Not To Sex A Chicken

There are old wise tales on determining if your chick is a male or female, hen or rooster. These methods are not scientific and do not work.

Sexing chicks is no easy task, and it definitely took me a few years to feel comfortable with my guesstimates.

I enjoy knowing what I have in my brooder box because it makes it easier for me to plan my flock. At the end of the day, I use a combination of these methods to conclude who is within my flock.

28 thoughts on “How to Sex Chickens: 5 Methods To Determine Hen Or Rooster”