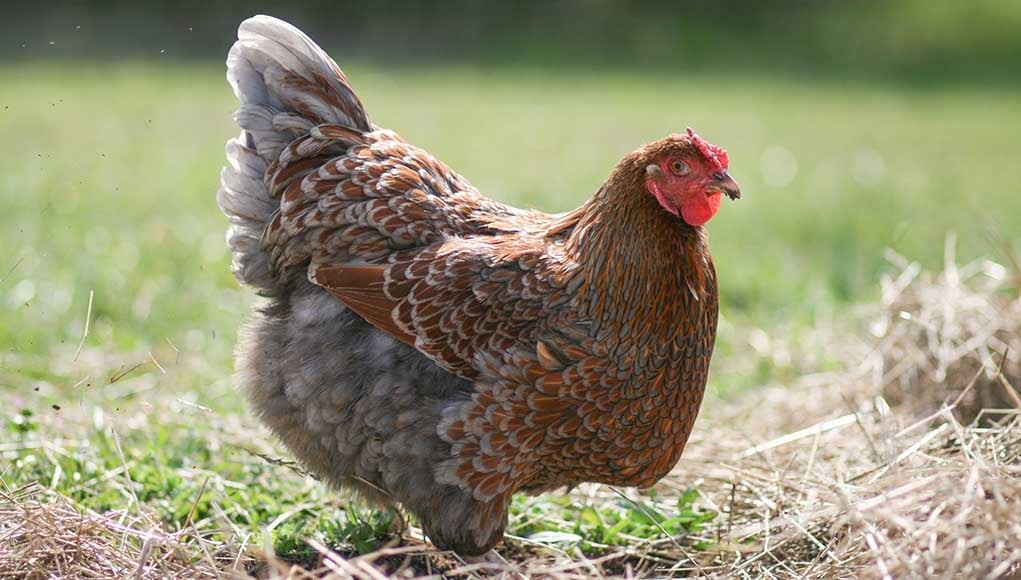 Blue is a very common and very old color variation in chickens and is being bred into more and more breeds each year.

There’s no question why – blue is absolutely gorgeous in chickens! Luckily this popularity is making it easier and easier to find and anyone can add a fun splash of color to their coop.

The Genetics Behind Blue

Blue chickens come about when you take a blackbird and add only one copy of the blue dilution.

The gene (“B” for the dilution and “b” for the wild-type) is incompletely dominant, which means that one copy is expressed, but two are expressed even more.

Other examples of incomplete dominance are red/white in snapdragons or the cream gene in horses.

If you cross a red snapdragon with a white one you get pink because the offspring only have one copy of each gene.

One cream gene turns a chestnut horse into a palomino or a bay horse into a buckskin while two-turn that chestnut to cremello and buckskin to perlino.

When a black-based chicken has TWO copies of the blue gene you end up with a splash.

These beautiful birds are white with splotches of black, blue, or grey. Splash chickens bred together will always produce splash chicks.

Since blue is heterozygous you will get mostly blue chicks with the rest being black or splash. Luckily if you want guaranteed blue chicks, you’ll just need one black parent and one splash!

Blue does work on colors other than black, though. The gene works by diluting black pigment, so you can combine it with any other color or pattern that expresses black normally. 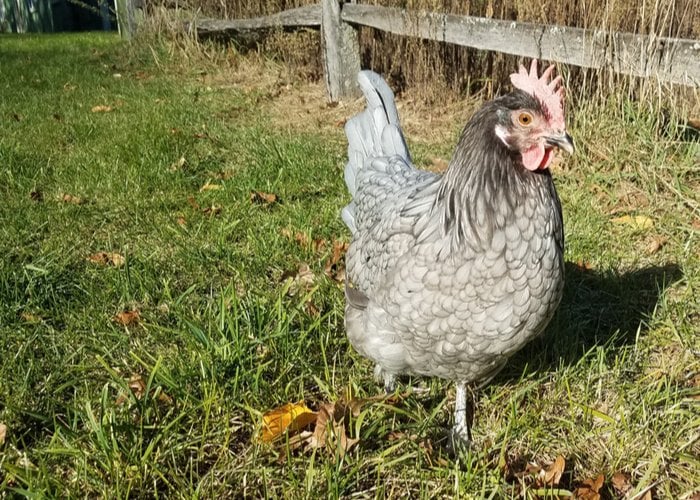 Many breeds have blue individuals or include some color that is influenced by blue. The best place to find breeds that are recognized in blue would be your country’s poultry association.

The American Poultry Association includes many different breeds, both bantam, and standard, that include blue varieties.

The American Bantam Association has its own list, but it is obviously restricted to just bantam breeds.

Newer breeds or hybrids that come in blue include the Blue Rock and Whiting True Blue.

If you are interested in blue patterned birds you can find blue laced red or blue partridge Wyandottes, blue copper Marans, and blue brassy back Old English Game Bantams!

There are many breeds that are not yet recognized by the APA or ABA that have blue individuals. The Crevecoeur of France is often black but can be found in blue.

The Isbar of Sweden is a more recently developed breed known for its blue plumage (and green eggs). The Breda is a French breed that can be found in blue and splash.

The Canadian Bresse also has blue and splash varieties along with the Liege Fighter and Sanjak Longcrower.

The Most Common Blue Chicken Breeds

If you are just starting out with chickens, or if you don’t want to overcomplicate things, there are a few breeds with blue that can easily be purchased from large hatcheries or even private breeders.

Blue Ameraucanas are a popular blue egg layer that has the bonus of a beard and muffs! These classic birds are an excellent choice if you want a little color in your egg carton.

Blue Andalusians are a great option for anyone who wants a lot of white eggs from a blue chicken! They are great for those who want a bird that can handle free-ranging well.

Blue Breasted Red Old English Bantams are cute little bird that has game heritage, so you know they’re plucky! This variety is a black-breasted red with a copy of the blue gene.

Blue Cochins can easily be found in both standard and bantam. They’re fluffy, cute, and amazing mothers! Their heavy feathering also helps them stay warm in cold climates.

Blue Copper Marans is a blue version of the standard Black Copper Marans, but they still lay a dark chocolate brown egg! They can be a little less easy to find but are very attractive birds.

Blue Dutch Bantams are a great choice if you want a friendly little bird that has good mothering instincts and lovely blue feathers. They look exactly like a mini version of a stereotypical chicken and lay a lot of small cream eggs.

Blue Jersey Giants are a BIG bird that comes in blue! They are originally meat birds but aren’t as efficient as other meat breeds and are therefore less popular.

Blue Rosecomb Bantams are similar to the Dutch Bantam in that they don’t have a large version and come in blue. Unlike the Dutch, they aren’t known for going broody.

Blue Laced Red Wyandottes are becoming more and more popular and although the color is not yet recognized they are easy to find.

These gorgeous birds are big, fluffy, lay lots of brown eggs, and have rich mahogany feathers edged in blue! Their beautiful appearance and winning personalities make them a great addition to just about any flock.

Wyandottes also comes in a solid blue variety, so if you’re looking for a fluffy egg layer that is all blue, you’re in luck!

Blue Rocks are actually a first-generation cross between the normal barred Plymouth Rock and a Blue Andalusian.

They are sex-linked and all of the hens are blue! If this breed sounds familiar you may have seen them listed as Sapphire Rock, Sapphire Blue, Plymouth Blue, and so on.

Blue Silkies are much like other Silkies, just blue colored. They are still uniquely feathered and make amazing mothers!

Blue Sumatras are an ornamental breed that normally comes in black but can be easily found in blue.

They are good mothers, but they are not cold-hardy at all! If you choose to raise them, you need to either live somewhere warm or make sure to keep them from getting too cold in the winter.

Rhode Island Blues are another hybrid, but this time they mixed a Rhode Island Red and an Australorp! Some are the standard blue, but others may be a mix of blue and red.

You may also see these called Production Blues.

The Sapphire Olive Egger is a hybrid blue chicken h a cute head tuft. They’re known for their olive-green eggs, which are becoming a very popular egg color.

White Crested Blue Polish is a fun variety that is very appropriately named! They have normal blue plumage, but their crest is a fun white poof. They’re sweet but can be a little nervous.

Whiting True Blues is a fairly recent breed developed by Dr. Tom Whiting. They lay a ton of lovely blue eggs and are good at free-ranging. They can be a little skittish or nervous, so if you want a friendly hen you may be disappointed.

As you can see there are an unimaginable number of chicken breeds that have solid blue or blue patterned individuals!

Whether you’re interested in backyard chickens, exhibition birds, or even production birds, there is a blue one out there for you! 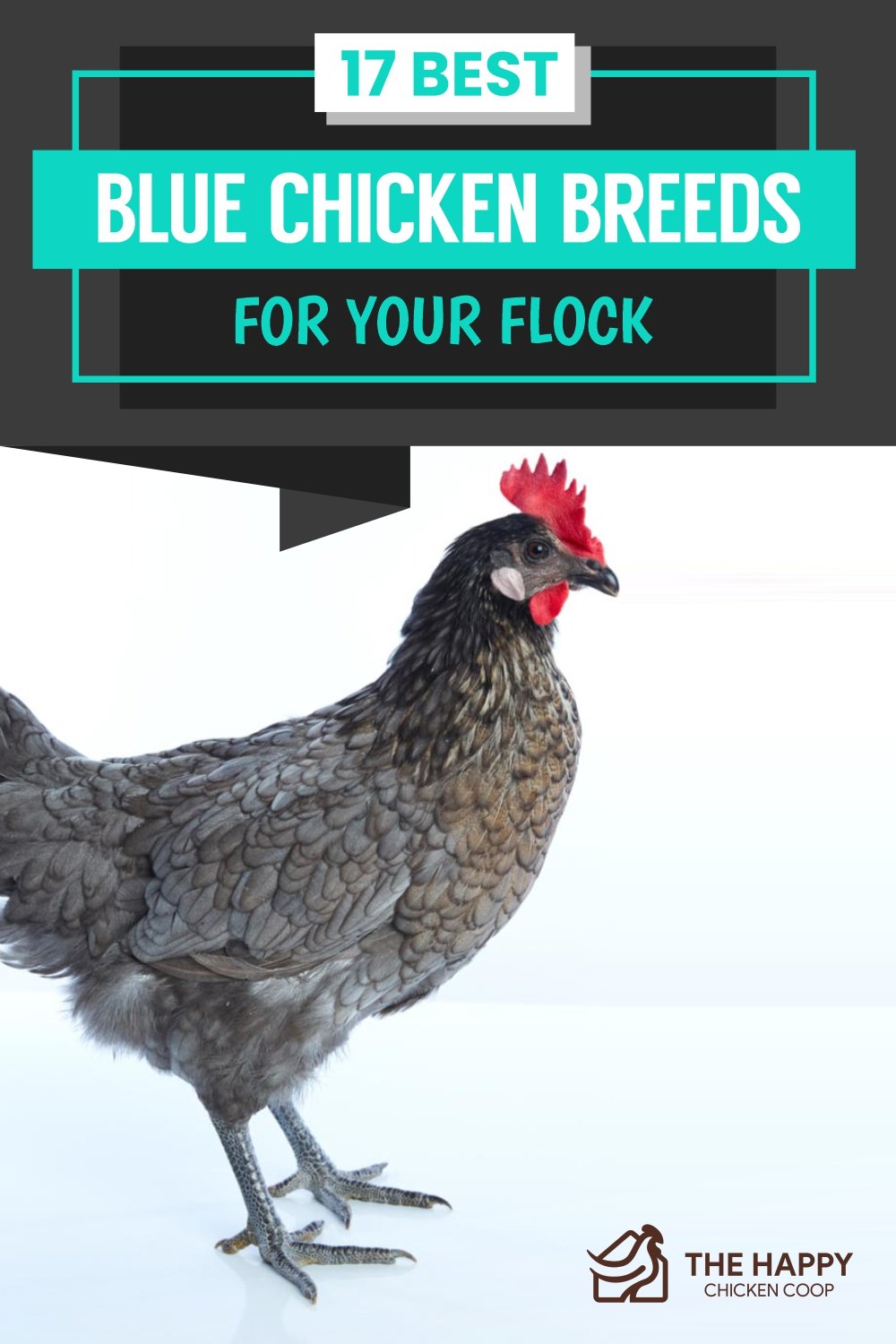 One thought on “17 Best Blue Chicken Breeds for Your Flock”