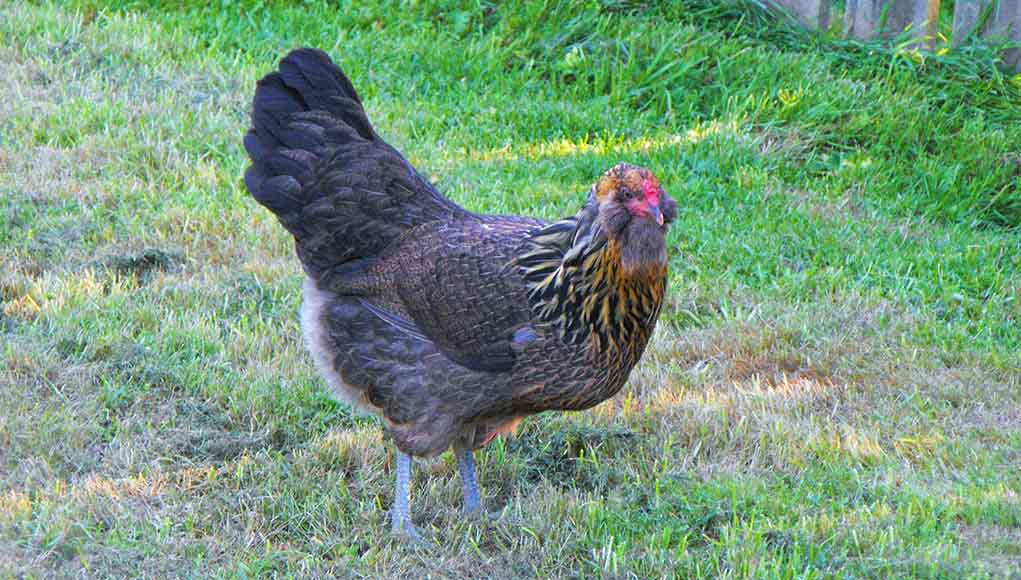 The Ameraucana is a unique chicken among its peers.

It is a fairly recent addition to the chicken breeds making its’ debut in the 1970s. It has a staunch band of breeders and followers in this country and many others and is slowly gathering more folks who are becoming devoted followers.

The history of the Ameraucana is a bit convoluted, as we shall see.

This article will explore the Ameraucana’s temperament, egg-laying, color varieties, and more. 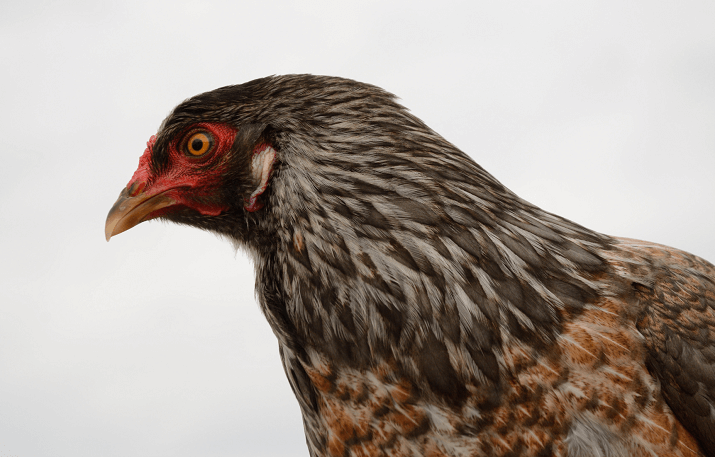 The coloring of the Ameraucana is quite variable, with several color palettes to choose from – anywhere from black to white, blue to wheaten. The variety of colors available makes this a beautiful bird.

It is considered a winter hardy, dual-purpose breed.

The beard and muffs give the bird a somewhat ‘chipmunk face,’ looking like their cheeks are puffed out!

With the eyes being bay red, they can look a bit fierce, but they are quite a docile bird. The look is deceiving.

In reading reviews for the temperament of this bird, I noticed a wide variety of behaviors. Whether or not this reflects upbringing or other circumstances is hard to determine. Its temperament has been noted as anywhere from skittish to docile and gentle.

It is generally a friendly bird but doesn’t necessarily enjoy being picked up and cuddled.

The Ameraucana is usually sociable with its’ own kind and usually sits in the middle of the pecking order. It also enjoys human contact and interactions; most folks say it is a brilliant and predator-savvy bird.

The Ameraucana is said to have a hawk-like appearance, and some enthusiasts appreciate this quality for free-range flocks. It is thought that mimicry deters attacks from actual hawks or other animals. The laser-focus of their bay red eyes only adds to this theory. 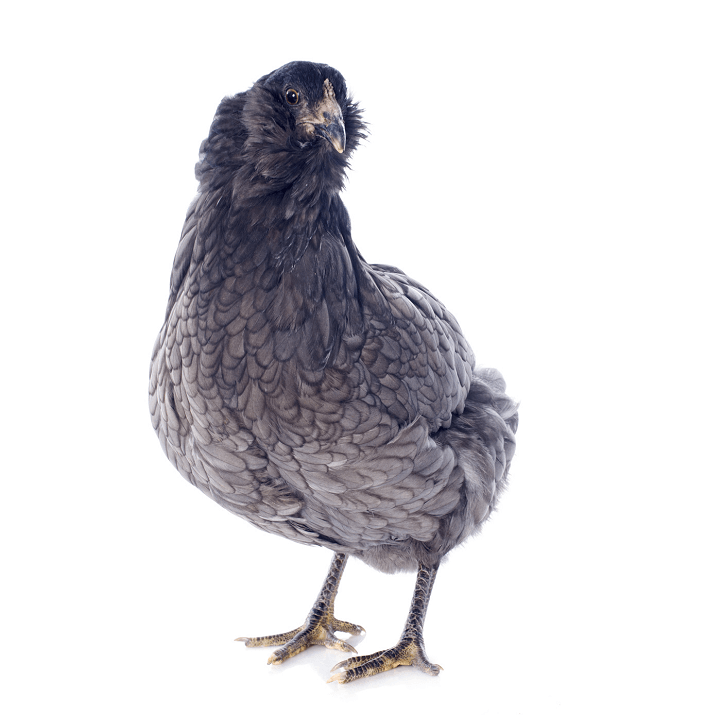 The Ameraucana has a pea comb which is red, as are the wattles. Wattles are on the small side or can be non-existent.

Eyes are a reddish bay color.

Ameraucanas have both beards and muffs. It can be difficult to differentiate between the muffs and beard, but it should be clearer to see on close inspection.

The tail should be carried upright almost at 45 degrees to the body.

Depending on the color of the plumage, the legs and feet should be slate blue to black. There should be four toes on each foot, and the shanks should be clean of feathering. The skin on the bottom of the foot is white, as is the skin of the bird.

There are eight recognized colors for the Ameraucana:

The Ameraucana is considered a light fowl, and weights should be around 6.5lb for males and 5.5lb for females.

The Ameraucana is beloved for its’ light blue eggs. It is a moderately good layer, producing about 3–4 medium-sized eggs/week. It can be a bit of a late starter, so don’t expect your eggs at 18-20 weeks.

Some folks reported they had waited 5-7 months before any eggs appeared.

In past times blue eggs have been promoted as having less cholesterol and more protein. This was simply a market ploy to get people interested in blue eggs. It may seem strange now, but blue eggs were not always popular.

The eggs have the same nutritional value as a green, brown, pink, or white egg.

Ameraucanas are non-broody for the most part. Occasionally one will go broody, but it is not a regular occurrence.

The Ameraucana does not have any significant health issues, unlike its parent, the Araucana.

They will live around 7-8 years on average. And due to their predator-savvy abilities, they tend to outlast other breeds in their flock. They are fantastic foragers and smart about their enemies, another feather in their caps.

Background and History of the Ameraucana

The recent history behind this breed extends back into the 1920s’ and to South America – Chile, to be specific.

The Mapuche Indians originally had two types of chickens – the Collonca and Quetero. These breeds were ancient even to the Indians and were first noted and written about by the Spanish invaders back in the 1500s.

The two breeds were bred together either naturally or by human intervention – no one knows – and from this union came the Araucana. The Araucana is a parent bird of the Ameraucana chicken.

The Araucana chicken was (and is) a scarce bird. The genetic makeup is such that it carries a lethal gene that can kill chicks in the shell. The lethal gene gives the Araucana its’ unique tufted ears. If both parents contribute a tufting gene (ET) – the chicks will die in the shell.

Ameraucanas were bred to retain the blue egg gene but eliminate the lethal gene of their parents.

The Araucana was brought to the US in limited quantities in the 1920s following the bird’s presentation by Professor Salvador Castillo at a conference in Santiago, Chile.

One of the folks instrumental in raising Araucanas and eventually ‘creating’ the Ameraucana was Mr. Keller of the Pratt Experimental Farm in Pennsylvania.

He cross-bred the Araucanas with other birds resulting in a mélange of different birds – some with ear tufts, some with muffs and beards, some rumpless, some with full tails, etc. – all were called Araucanas.

Interestingly, in the UK, Australia, and many other countries, both Araucanas and Ameraucanas are accepted as the same breed, whether they are rumpless or tailed.

Is the Ameraucana Right for You?

These birds are considered to be docile and people-friendly. They are quite hardy -although some people say they don’t tolerate freezing climates. They seem to tolerate NY winters fairly well as long as they have dry and draft-proof accommodations.

They will bear confinement but don’t do it well. They are a fairly independent bird, so they do love to free-range if they can.

A huge plus for many folks is that they lay a moderate to a good amount of light blue eggs. It seems blue eggs are becoming ‘a thing’ in many supermarkets where they sell for a not-insignificant amount!

As with most roosters, they can get a bit cranky at times, but they are not overly aggressive that I have found during research.

Others have reported that their Ameraucanas struggle to handle highly humid and hot environments. The differing experiences may have a lot to do with the colorful lineage of the bird in question.

Many hatchery and other breeders offer birds labeled as Americana or Americauna. These are not Ameraucanas – note the spelling…

It has been used as a marketing ploy for many years now. In fact, what they are selling is Easter Eggers – which is not a pure breed. An Easter Egger is a hybrid, and while there is nothing wrong with Easter Eggers, you should know the difference – because many private ‘breeders’ apparently don’t.

A telltale sign in some of the hatchery catalogs is if the birds are advertised as ‘recommended for laying or not for exhibition or 4H use’.

Like the Araucana and Ameraucana, the Easter Egger may also lay blue eggs, have muffs, or even beards.

The Ameraucana is still considered to be a rare breed here in the US. If you can afford the outlay to get some of these lovely birds, they are well worth the money.
As we mentioned, in Australia, UK, and many other countries, the Araucana and Ameraucana are considered the same breed, so it can be confusing!
The Ameraucana is certainly a pretty addition to your flock – both in plumage and colored egg-laying.
Do you have Ameraucanas? Let us know in the comments section below…
Read Easter Egger: Everything You Need To Know About This Chicken