What Are Chicken Tufts? 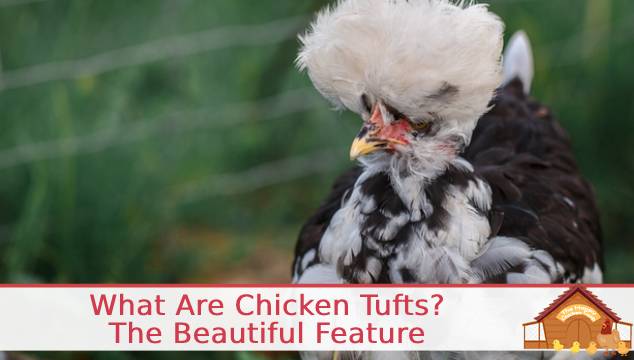 Chicken tufts are a beautiful genetic abnormality. Only Araucanas breed chickens or mixed breeds that are derived from them are known to produce tufts. They are not to be confused with chicken combs which are a critical part of the chicken anatomy which all chickens have.

The tufts are basically a group of feathers that grow just around a protruding flap of the chicken’s skin near the ear. This skin protrusion is called a peduncle. Chicken tufts are caused by a mutation an the autosomal – or non-sex linked dominant gene.
The chicken tufted gene is represented by the Et symbol in breeding guides to represent the inclusion of an extended tuft. The tuft gene is altogether different from the gene that creates beards and muffs in other chicken breeds.
Trends in chickens, just like everything else, change over time. Right now, chicken tufts appear to be en vogue once again – with keepers prizing the genetic mutation that causes both male and female birds to have the appearance of a handlebar mustache.

Chicken tufts can look extremely difference in both color and direction. Some feathers protrude from just under the earlobes of the bird’s face and only frame the sides of it. The tufts on the chicken can also either hang straight down or curl upwards – giving even more of a mustache appearance. Although it is more rare, some Araucana breed chicken grow only a single tuft on one side of their face.
Araucanas are also known to have rumps without much of a feathered tail or perhaps even no tail at all. This tufted chicken breed also boast more of a barrel or round shape than many other types of poultry birds. Some genetic research has shown that birds which inherit the Et gene also have inherited the rumples – Rp, gene as well. Both genetic mutations are dominant and can indicate an enhanced rate of embryo mortality.
Simply because you purchase Araucana chickens does not guarantee you will hatch chicks with tufts. Approximately 25 percent of the birds born each year develop tufts. But, if you are going to show or breed your Araucanas, they will likely only score well. By current standards, an Araucana must boast chicken tufts in order to conform to perfection standards for the breed. There are also other beautiful lap chickens that are for show if you are interested in bird showing. 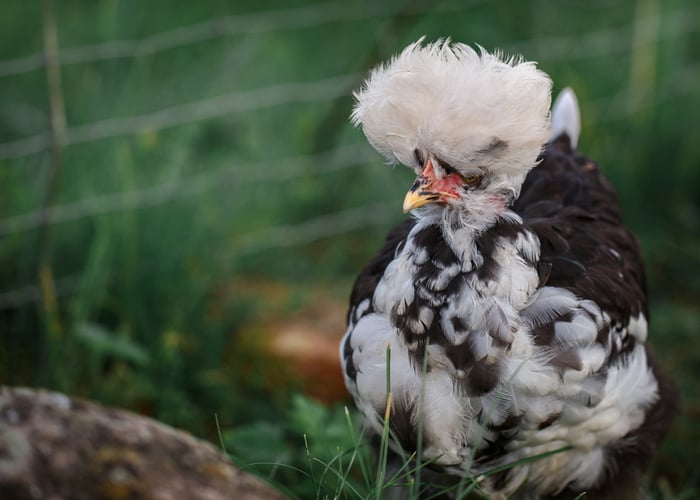 Araucanas born without tufts are often dubbed “clean faced” birds. Chickens that develop uneven tufts, one sided tufts, or small tufts, will not score as high when shown or bring a large payday for breeders. The birds with large and full chicken tufts are the most prized.
All Araucanas with chicken tufts only carry one copy of the gene which causes the genetic abnormality. Carrying two copies of the gene would be a lethal proposition for the bird.
An Araucana embryo with two copies of the chicken tuft gene would likely not make it past day 18 of the incubation process. An embryo with one copy of the gene is generally considered to have a 50 percent chance of passing the genetic mutation on to its chicks.
Because the chicken tuft gene is a visibly dominant gene, you can determine quickly if the Araucana birds you purchased or hatched, possess this trait.

Breeding Tufts In Your Flock

When mating Araucanas to try to develop hatchlings with chicken tufts, you may have about a 50 percent success rate when crossing clean faced birds with tufted birds. Although this may not be as high of a percentage as you would like, this mixture of breeding birds tends not to cause any in-shell hatchling deaths.
If you do not mind a portion of the eggs in your incubator not hatching and want to achieve the largest number of Araucanas with chicken tufts as possible, mating only tufted birds would be the way to go. Mating a hen with a tufts to a tufted rooster can achieve a 75 percent chicken tuft hatch – but about 25 percent of the chicken embryos will die in their shells.
The Araucana breed is not only highly prized by some for its chicken tufts. They are also known for the colorful eggs it lays and rumplessness. This chicken breed is one of only a few that lay blue eggs.
The blue shade is created due to another autosomal dominant gene known by the O genetic symbol. The color is created by a liver bile pigment that is deposited throughout the egg and is visible from the outside of the shell.
Even though a rump less bird may be more attractive to buyers and at poultry shows, the lack of a movable tail can cause a negative impact on fertility. The lack of physical contact during the chicken mating process can impede the mating process. To help prevent a fertility issue, some breeders trim away the ample feather fluff around the hen’s vent to increase physical contact with the rooster during mating.
Breeders who attempt to mate a rump less hen bird to a rooster with a tail to avoid fertility problems, only about 50 percent of any resulting chicks will be rump less or partially rump less – which is largely considered extremely unattractive.
Sometimes Araucanas lay eggs that are more of a green shade, pinkish, or  tinted with brown. Eggs laid in anything but blue eggs by this chicken breed are often referred to as being “contaminated” cosmetically. If you goal is to developed tufted chickens that lay solid blue eggs, never breed a hen with a rooster that was not hatched from an egg of the desired color.
Chicken tufts are beautiful and possessing them will not harm a bird in any way. There are many chicken breeds without tufts, so having a chicken with tufts is something to be admired and appreciated. 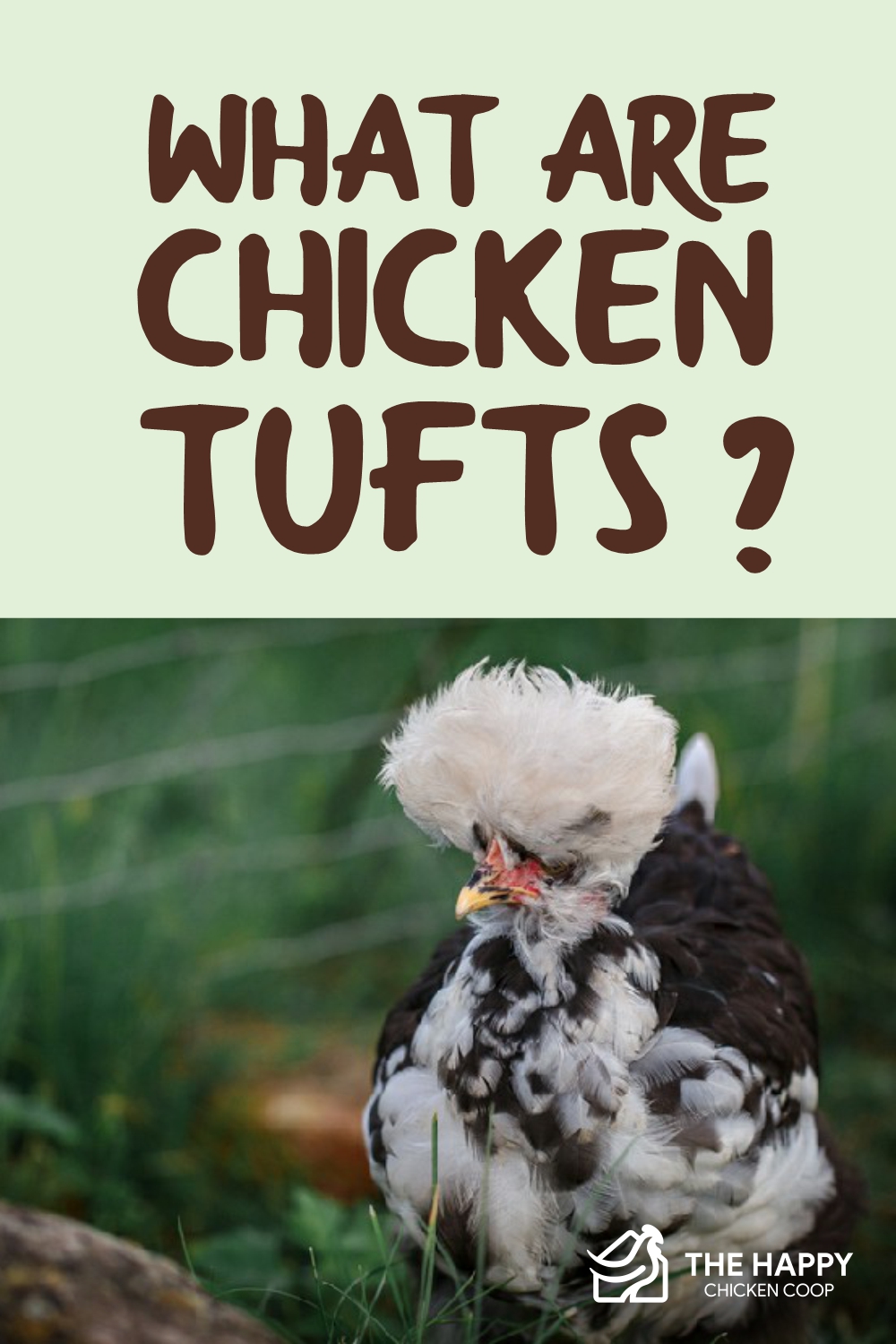