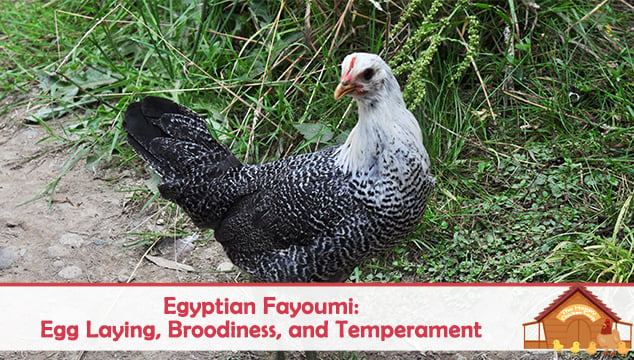 Fayoumi is an Egyptian breed of chicken that is derived from ancient jungle fowl and is believed to have been around during the days of the Egyptian Pharaohs. Though Fayoumi chickens have been raised along the Nile River for centuries, and have been in North America since 1940, these small, independent, amazing chickens are still relatively uncommon in the U.S. They are, however, arguably gaining popularity in the United States because of their uniqueness and potential value to scientists. Known for their exotic beauty, incredible resistance to disease, early maturity and unparalleled foraging skills, these birds are also fiercely independent and somewhat of a challenge to keep.

Fayoumi chickens are quite small in size with large dark eyes and tails held high. With a silvery head, large single comb, onyx-dark eyes, and slim, black-speckled body, they are sometimes likened to a roadrunner with their forward jutting breast and neck and upright tails.  The skin color of Fayoumi chicken is typically slate blue and they have dark horn colored beaks. Hens have silver-white hue on their necks and heads with the rest of their body barred. Fayoumi roosters have plumage with silver-white on the head, neck, saddle and back, with the rest in a white and black barring.
Their large, bright, dark eyes are excellent at scanning the skies for predators–a trait which serves them well as independent birds that cover so much ground in daily foraging.

Fayoumi are also one of the fastest maturing breeds. Cockerels start crowing at an unbelievable five or six weeks, and hens can begin laying eggs as early as 4 and a half or 5 months. Here’s what they look like as baby chicks.

They reach maturity quickly and remain quite small compared with other breeds. On an average, a cock weights about 4.5 lbs. and a hen weights about 3.5 lbs.  The Fayoumi hens are also good layers. They will produce about 150 small off-white eggs per year on an average.

Fayoumis do not like being handled by humans, and will usually become very vocal when picked up. They can be tamed to some degree with treats, but really will never be fully tame like most other breeds of chicken.  If one is intent on managing Fayoumi in their flock, it is important to know that they are busy, lively birds who will roost in trees, and also are very flighty, so care needs to be taken with boundary fencing.

They are happiest when free ranging because they are die hard foragers. Their foraging skills are so well honed that they need very little feed to survive, and in fact, they prefer to eat what they forage over any commercial feed, making them an incredibly economical breed.
The key to a foraging flock, of course, is to make sure they have the space to roam! These birds do not just dislike confinement, they often will not tolerate it, and will either find a way of escape or beat themselves senseless in the attempt to do so.
Many resources complain about how difficult Fayoumis are to keep due to their flighty, wild nature.  Due to their lighter weight and energetic, curious personalities, these birds are very capable and fond of flying. It is often claimed that if these birds were to escape the confines of their coop, they could quite happily and successfully go on living in the wild….as their tendency towards feral is quite apparent.
As your backyard chicken, they will also be very obvious about their dislike of being handled. With all the space and hands-off preference that this rambunctious breed needs to thrive, an easily-contained breed of chicken may be a far better choice.
Even though they’ve been around for potentially thousands of years, because they’re not the easiest breed to keep, these birds are not popular in the United States or the UK. Finding a distributor for the Fayoumi while not impossible, may be very difficult.

Independent foragers, wise predator avoiders, and incredibly resistant to disease, the one thing this breed can’t contend with is the cold. Its Egyptian background would clearly indicate that the Fayoumi can handle hot climates, but with that large comb and light feathering, this is a chicken for warm latitudes only.

One of the most fascinating aspects of the Fayoumi is their ability to be incredibly resistant to disease.  Their natural immunities to many of the viral and bacteriological diseases that plague other poultry are being studied by researchers all over the world. Notably, Fayoumis are suspected to be resistant to Marek’s Disease, Newcastle disease, maybe even Avian Influenza as well as many other illnesses.
Iowa State University obtained Fayoumi in the early 1940’s when the university’s Dean of Agriculture carried some hatching eggs home from Egypt for the poultry genetics program to study.  They have since preserved the breed as a research flock, and are credited as the first of several programs in the US dedicated to the study of Fayoumi’s incredibly strong resistance to diseases that other breeds readily succumb to.
As potentially valuable as this disease resistant trait might be, until recently, the genetic variation that might make this possible has not widely been studied.  Citing a June 2019 study done by Penn State University researchers, virus-resilient genes in Fayoumi and Leghorn chicken breeds were identified. Scientists have discovered a set of genes, expressed in two breeds of chickens – Fayoumi and Leghorn – which can fight off, in varying degrees, a common poultry disease known as Newcastle disease. Newcastle is a deadly respiratory illness that can infect and kill off half a flock in a matter of days. An international team of scientists – led by Pennsylvania State University researchers – looked for ways for farmers to successfully breed chickens that can resist one of the biggest disease threats within the poultry industry.  “Identifying the genes that help chickens survive Newcastle disease may help design breeding strategies that produce flocks that are more resilient and more productive,” quotes Vivek Kapur, Professor of Animal Science and Associate Director of the Huck Institutes of the Life Sciences at Penn State. “The findings will improve health, especially in low and middle-income countries, through enhancing productivity for smallholder farmers, especially in Africa and Asia, and by increasing food sources for their families and communities. According to Kapur, since these chickens have been running around back yards for hundreds of years, even in the face of constant exposure to Newcastle disease, there’s something innate that has enabled them to survive in this environment where the disease is endemic. (1)
Similar work by researchers at Iowa State University also explored the genetics of Fayoumi chickens, and in recent projects, animal science faculty members from Iowa State are working with Fayoumi in Africa, specifically, in an effort to improve nutrition and alleviate food scarcity across the continent.   Researchers will explore the local genetic diversity of chickens in Africa and with the information gained by studying the genetics of Fayoumi, they hope to breed birds that are more resistant to Newcastle disease. Because remote places without electricity cannot refrigerate the vaccine, Newcastle outbreaks remain the biggest roadblock to successful poultry production here.  In theory, a chicken bred to flourish in such climates as well as maintain resistance to Newcastle would undoubtedly help the economy and feed local residents at a much higher nutritional level.
These scientific studies are ongoing and may one day prove the Fayoumi to be one of the most important breeds of chicken that although ancient, can teach us through modern genetic studies how to make future generations of chicken virtually disease resistant.  So, even if we don’t appreciate the Fayoumi’s indifference to humans, or its preference to NOT be part of our backyard flock, we have to realize that this breed is a gem in it’s own right, and we are just getting started figuring out all the potential benefits the Fayoumi can bring to our own poultry industry, as well as it’s place in the future of less advantaged cultures. 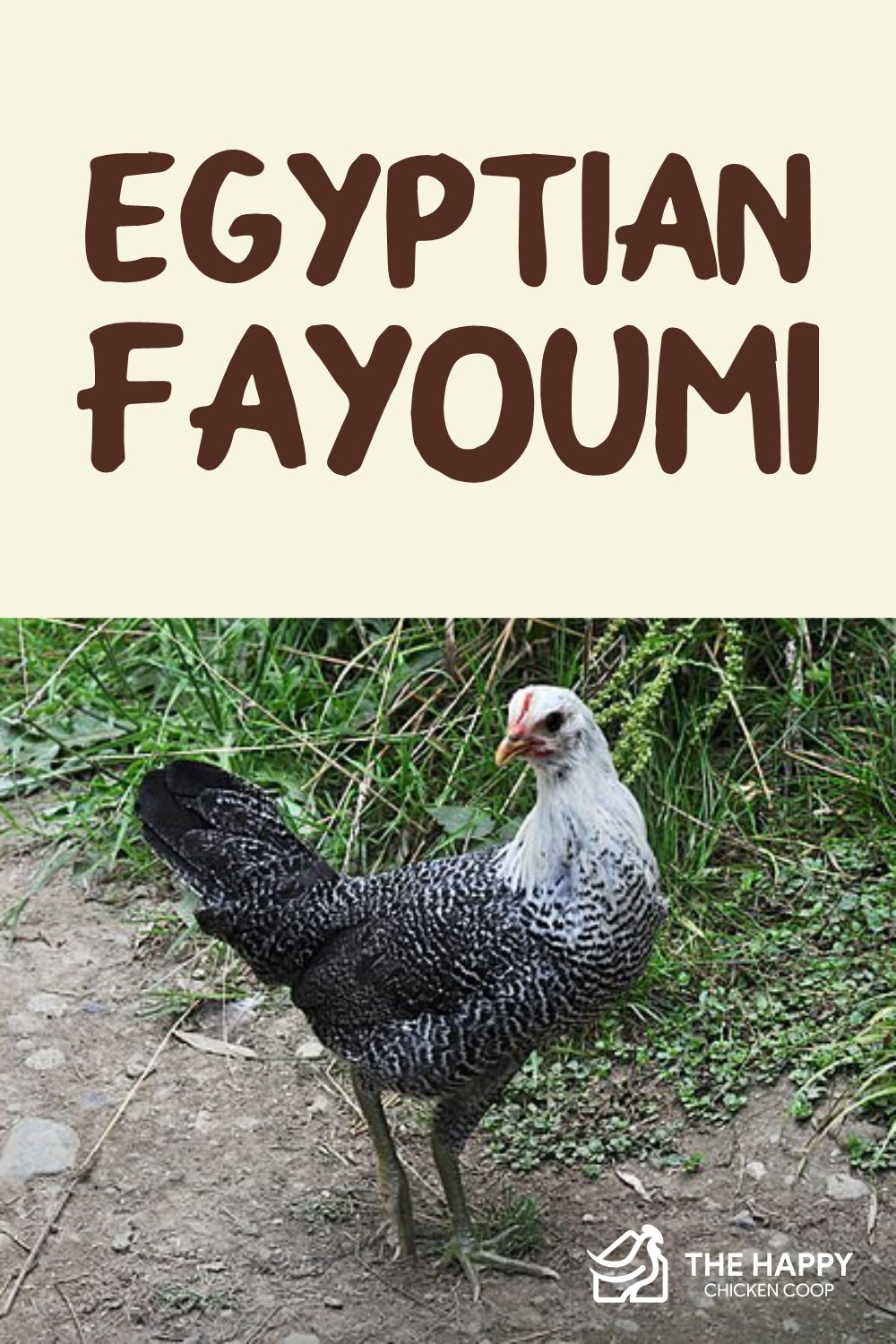