Newcastle Disease In Poultry: What It Is, and Why There Was A Massive Culling of Poultry in California 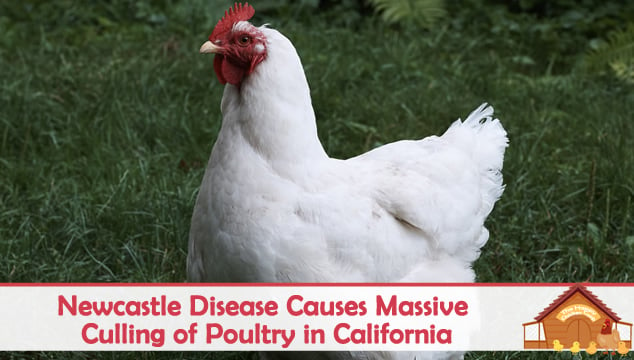 Imagine waking up to a knock on the door, and a slew of people alleged to be government officials alert you that your entire flock of beloved chickens is scheduled to be destroyed.

In 2019 many California residents had to face a bleak reality.

It was a Newcastle disease outbreak (vND).

However, the disease is considered to be highly contagious and has spread to larger operations.

The outbreak reached a new level of concern when commercial poultry operations became infected, and according to the Press Enterprise, “822,000 of their birds were euthanized.”

More and more backyard chicken owners had to face a reality they never imagined when they decided to raise their birds.

Chicken lovers in Riverside and San Bernadino counties were visited by government officials, and shortly after, their flocks were killed and carried off their properties in black bags.

Some residents have stated that they were not shown proper identification, nor was there proof provided that their chickens were even affected by the disease.

It seems the solution to the outbreak was eradicating all backyard poultry, regardless of whether they were carriers of the disease.

With that being said, according to the USDA, “Since May 18, 2018, USDA has confirmed 445 premises in California as infected with [Newcastle Disease], including 141 in San Bernardino County, 259 in Riverside County, 44 in Los Angeles County, 1 in Ventura County, and 1 in Alameda County.

What is Newcastle Disease?

Newcastle disease effects poultry in a devastating way and most symptoms will be quite obvious.

However, some infected birds will carry the virus (and shed it) for months without a single symptom.

Even more alarming, the virus can survive outside of the infected bird for up to 2 months after being excreted (in their droppings, for example).

Newcastle is, in fact, very deadly to poultry, and can easily wipe out a backyard flock, not to mention that it is extremely contagious.

The concern for the poultry population seems to center around the purpose of getting the disease under control before its reach spans even farther.

The disease is so virulent that many birds and poultry die without showing any clinical signs.”

As the disease develops birds may show these signs:

Backyard chickens owners, who live in close relation to their flocks, may notice the signs and symptoms more quickly than in larger commercial productions.

Which begs the question, “Why aren’t citizens allowed other options, or to make their own decisions, about confinement or culling?”

True, there are biosecurity measures that should be considered when culling, or handling infected animals, however, protesters have taken to YouTube to demonstrate that these measures are not being met.

How is Newcastle Disease Spread?

Newcastle disease is spread easily from one bird to another through contact, bodily fluids, eggs, surfaces eggs have touched, manure, and farm equipment.

Unfortunately, it can also be spread from humans who have been in contact with the disease to healthy birds. The virus will remain on clothing, hands, equipment, or boots until it is sanitized properly.

Newcastle is a highly contagious poultry disease that shows no mercy.

Birds that become infected will nearly always die. It affects all types of breeds.

At this time, there is no cure for Newcastle Disease, but chicken owners are urged to take preventative measures.

Confining new birds, or birds returning from shows, for at least 30 will prevent the spread of the disease to the established flock.

If handling poultry, good hygiene and hand-washing is extremely important, as well as washing boots, tires and other equipment that may have been in contact with poultry or pen areas.

The USDA has created a “Defend the Flock” program where subscribers can learn more about biosecurity practices and protecting their flock.

Some chicken owners have stated that even though their chickens appear healthy and have not been tested positive, their birds were still culled by government officials.

So, even with proper prevention, some neighborhoods in the affected areas of California were at risk of losing their flocks.

How Does Newcastle Disease Affect Humans?

According to the USDA, Newcastle Disease does not typically pose any threats to humans—not through contact or consumption.

Proper food preparation is key in preventing many types of illness when it comes to consuming meat and eggs, in general.

There has never been a report of a human having contracted Newcastle disease.

However, backyard poultry enthusiasts must practice proper hygiene and biosecurity measures with their flocks since they have closer contact with their chickens than larger poultry operations.

There have been rare reports of humans having mild flu-like symptoms or pink eye due to Newcastle Disease in their chickens.

Is Your Poultry is at Risk?

To keep updated on areas in which poultry may be at risk for inspection, and culling, keep a close eye on the USDA website.

Up-to-date information is provided for those wanting to stay in the loop, or are concerned for their own flocks.

If you live near or in any of these areas, your poultry may be at risk for contracting the disease and being taken by officials.

It is emotionally exhausting for anyone to lose a beloved pet to such circumstances.

Backyard chicken owners put so much time, money, and TLC into their flocks.

Having someone come to your home to kill your animals is a devastating situation to find yourself in.

If Newcastle disease continued to spread through backyard poultry, wild birds, and eventually to the poultry industry, the commercial industry would have been in dire straights.

The USDA expressed concern that a “large vND outbreak would have long-term economic consequences and an extensive recovery period.”

Where to Go for Support

Since then, groups sprouted up all over the internet to offer support, raise awareness, and ask important questions regarding the practices, professionalism, and reasoning behind these massive cullings.

The SOB “Save Our Birds” group is a group that was established to raise awareness and share stories of what is currently happening in California.

They are working hard to get answers and find alternative options rather than extreme killings.

They have recently filed a lawsuit requesting early discovery against the California Department of Food and Agriculture (CDFA) and a GoFund Me page has been set up to raise money for their cause.

11 thoughts on “Newcastle Disease In Poultry: What It Is, and Why There Was A Massive Culling of Poultry in California”