Everything You Need To Know About Araucana Chickens

The Araucana chickens are the breed responsible for the blue egg craze, and unfortunately, many chicken enthusiasts confuse this quirky chicken with the Ameraucana and the Easter Egger.

It’s understandable, however, since these three types of chickens all lay colorful eggs—mainly blue.

Because of the rarity of this breed, the Araucana is hard to come by in the United States. Many hatcheries have chosen not to breed them due to hatch rate issues that are caused by genetics.

Most blue egg layers sold by hatcheries are the Easter Egger or the Ameraucana.

So, if you are looking to add the Araucana breed to your flock, you will most likely need to consult with a breeder who is working on developing the breed. 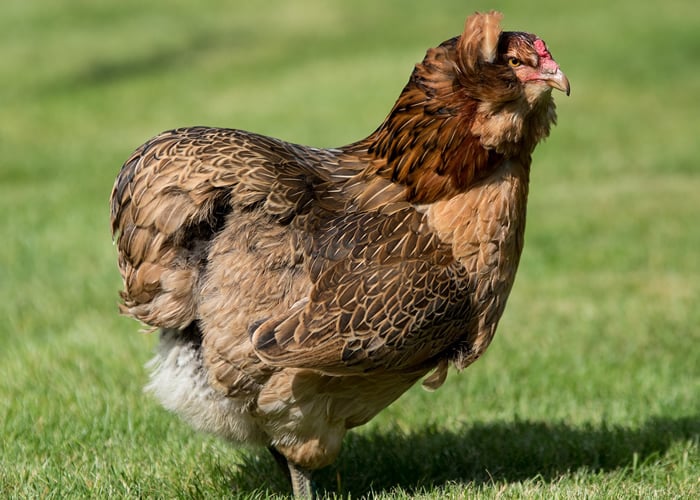 The Araucana a Blue Egg Layer

While the Easter Egger and the Ameraucana both lay lovely colorful eggs, they are actually just hybrids of the Araucana.

In the 1930s, the Araucana found its way from Chile to the United States and into the hearts of chicken lovers.

It wasn’t until the 70’s that they were recognized by the APA and became popular amongst the backyard chicken owners within the past five to ten years.

Those who love a rainbow-colored assortment of eggs undoubtedly have added the Araucana to their flock. 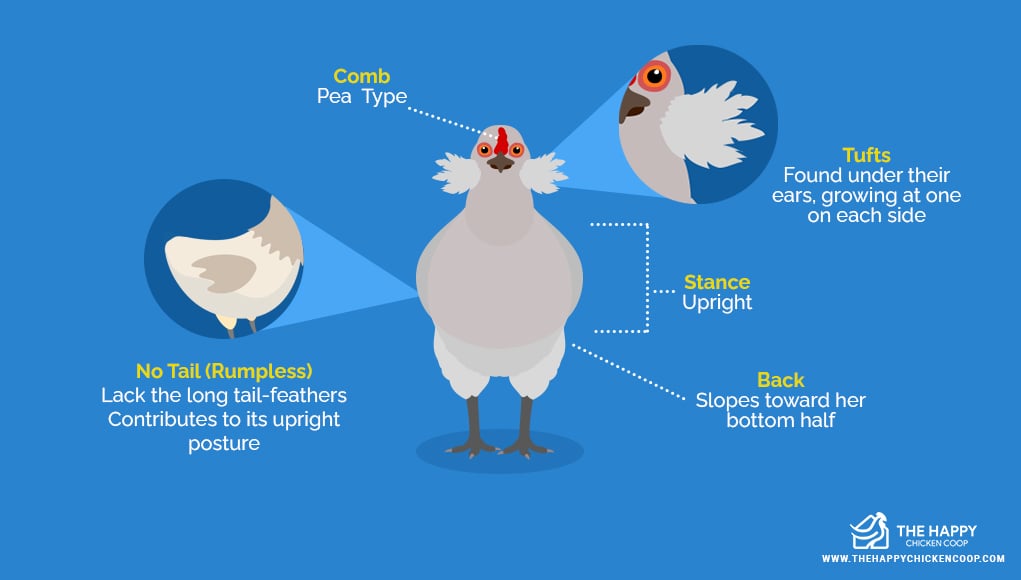 The appearance of the Araucana

The Araucana is not unique just because of her egg color—she also has unique physical characteristics that many popular breeds lack.

For one, she has an upright stance and resembles some species of wild game birds. Her back slopes toward her bottom half, giving her the posture she is well-known for.

If you aren’t sure if you are looking at an Araucana or an Easter Egger, look for two telltale characteristics (or lack thereof) that will most likely indicate you are in the presence of a

Tufts are the comical feathers that protrude from the Araucana’s cheeks. They grow under a fold of skin under their ears and might stick out like a gentleman’s handlebar mustache.

These tufts usually come in two (one on each side) but not always. They may also take on personalities of their own by growing every which way possible.

One thing is for sure, though. They add a ton of character to your Araucana’s appearance.

Rumpless basically means what you might think it to mean…they have no rumps! Or in other words, they lack the long tail feathers that other breeds of chickens have.

This characteristic also contributes to the appearance of the Araucana’s upright posture—a very telling trait.

These two characteristics give this chicken a unique and highly sought appearance—well, that and their lovely eggs, of course!

Unfortunately, the very gene creates the comedic tufts that cause many chicks to die during incubation.

This is why many hatcheries do not carry the Araucana chicken…so, if you are looking for your own frizzy-looking rumpless chickens, this is why you may have to seek out a dedicated breeder.

As far as typical chicken characteristics go, Araucanas have pea combs, which lay closer to the chicken’s head, unlike large floppy combs.

Upon close inspection, little pea-like protrusions are present on the Araucanas comb.

The Araucana comes in black, red, silver duck wing, white, and golden duck wing. The darker-colored varieties of this chicken may have black or blue legs. 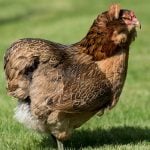 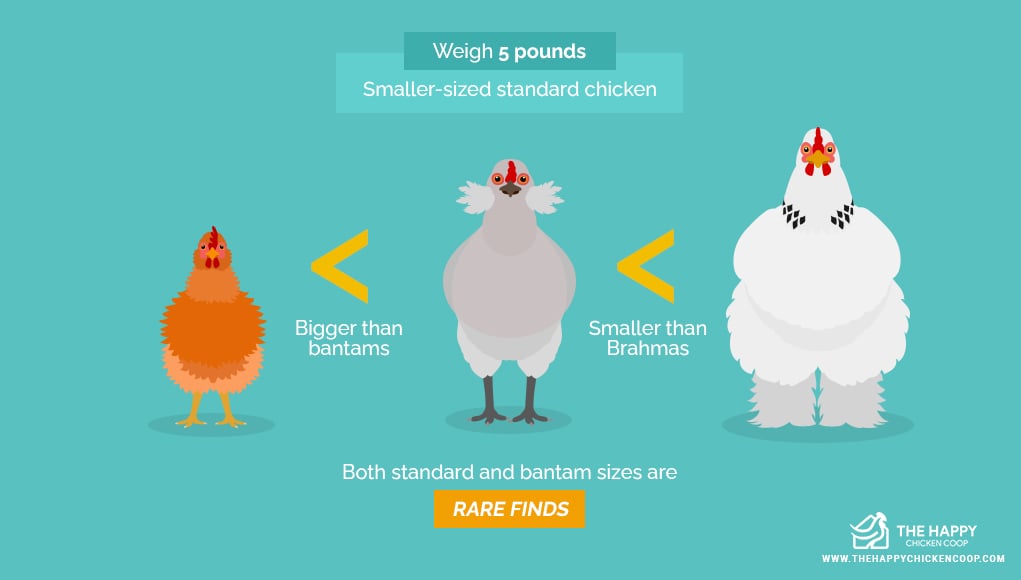 Araucanas are considered smaller-sized standard chickens. Meaning they are bigger than bantams but smaller than Brahma’s (the king of chickens).

An Araucana will typically weigh in at around 5 lbs. However, they can be found in a bantam variety, but only if you look hard for them because standard and bantam sizes are both considered rare finds.

While the Araucana is considered on the small end of the spectrum, interestingly, they grow fairly fast.

If you raise more than one breed of chicken, you will quickly notice that your Araucanas tend to grow out of their awkward teenage years sooner than their counterparts. 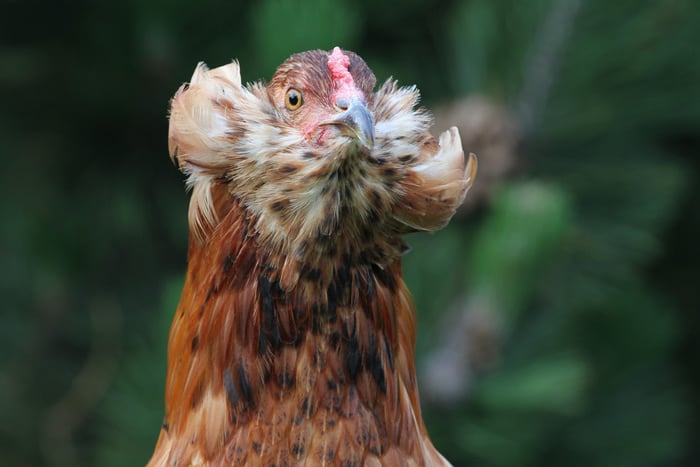 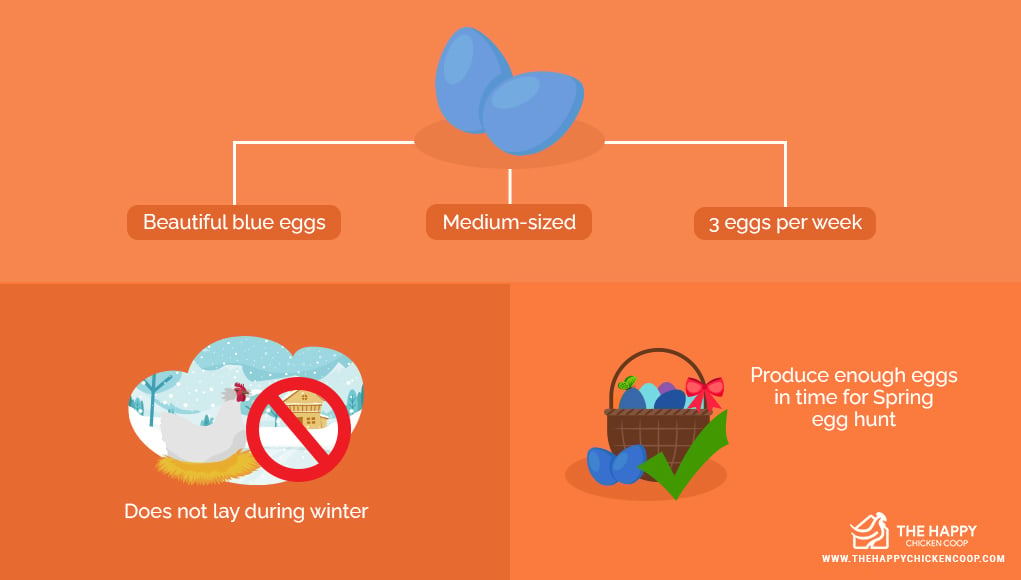 Egg Laying of the Araucana

Since Araucanas are on the smaller side, they are not ideal as meat birds, but what they lack in meat makes up for beautiful blue eggs.

Even though hens are smaller, their eggs are medium-sized and perfect for your Easter basket, and hey, you don’t even have to color them!

At a rate of approximately 3 eggs per week, the Araucana is not necessarily meant for production, but she can certainly earn her keep.

However, because this plucky hen originated in the warmer climates of South America, she does tend to take the winters off from laying.

No matter, she will be back at it once the weather warms up and just in time for Spring egg hunts with the kids. 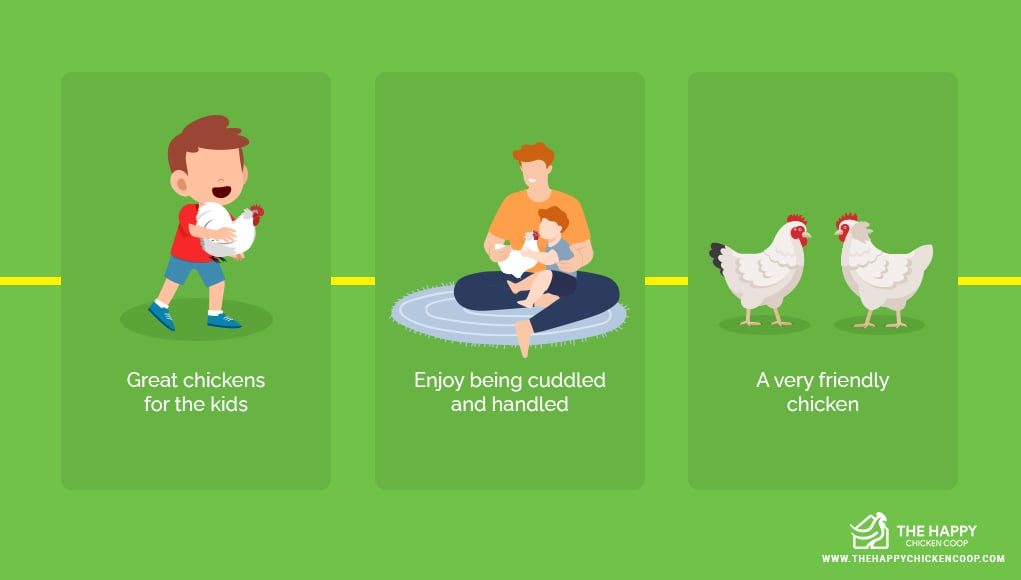 The jury is out on the temperament of the Araucana. Some enthusiasts say they are the friendliest chickens they’ve ever owned, while others swear that they are flighty and nervous.

High energy may not always equate to unfriendly chickens, so it might just depend on who you talk to and how they chose to interact with their Araucanas.

A quick internet search will reveal that those dedicated to developing this breed have only loving interactions with their Araucanas.

Many breeders will tell you that they are great chickens for the kids because they actually enjoy being cuddled and handled. 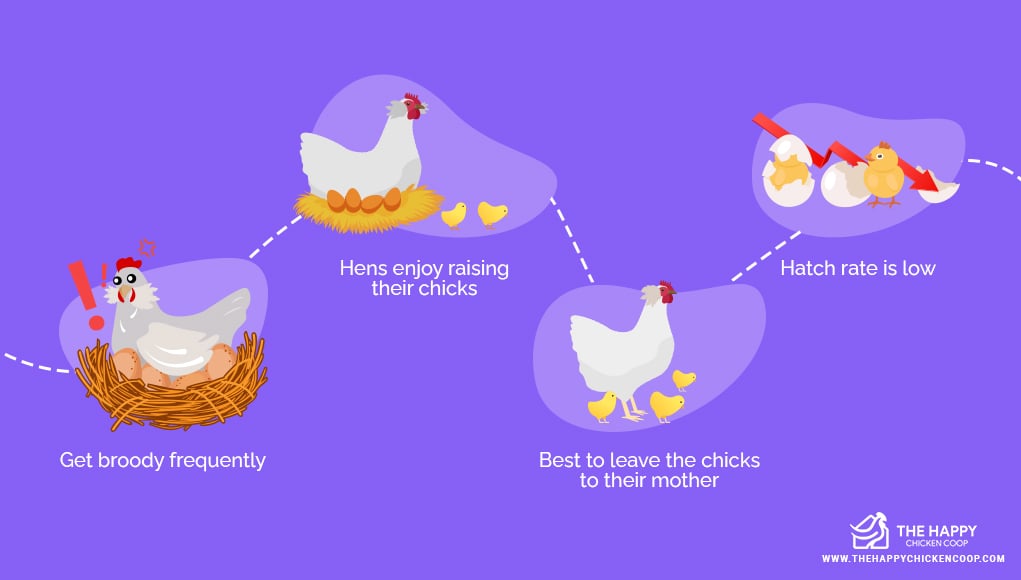 This means they happen to enjoy raising their own little clutch of chicks, and if you plan to breed these birds, leaving the mother hen to do her job will make the process easier for you.

Just remember that the hatch rate is pretty low for the Araucana, so don’t be discouraged if only a few babies hatch.

And on that note, if momma hen has been broody for a long time, is losing weight, and looking a little rough, it may be time to help her move on from any eggs that have not hatched. 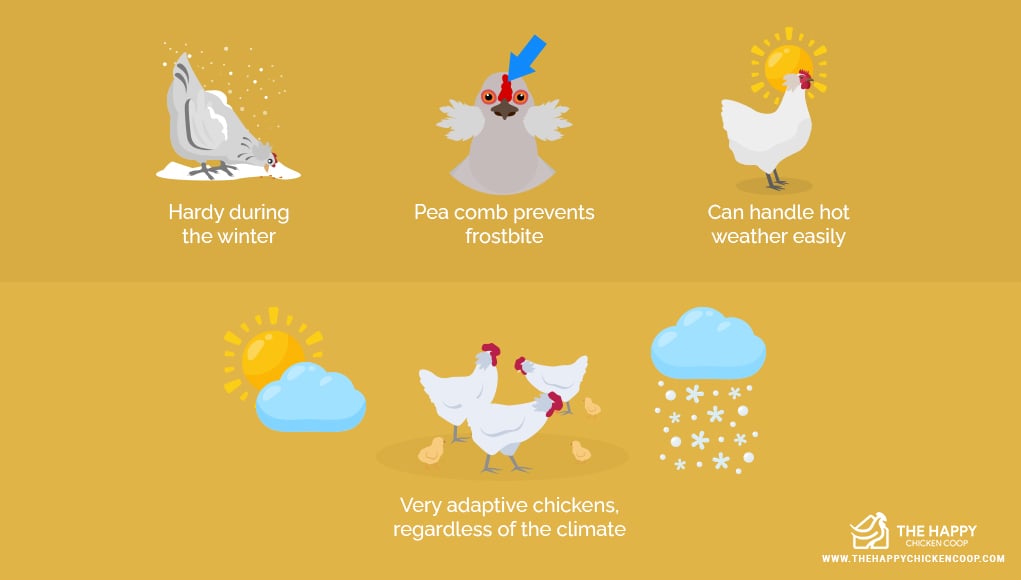 The Araucana is surprisingly hardy during the winter.

Even though these chickens originated in warmer climates, they do particularly well in the cold. Having a pea comb makes frostbite uncommon.

In the same line, Araucanas can handle the hot weather just as easily. They are adaptive chickens that really seem to go with the flow, no matter where they live.

Araucanas are particularly curious and active chickens, and they love to spend their days scratching about for tasty treats. They are savvy chickens who keep their eyes peeled for predators and do their best to stay out of harm’s way.

It’s been noted that Araucanas tend to travel a bit more than a typical chicken, and they enjoy taking the same route daily.

So, if your neighbors aren’t in love with chickens, make sure you keep your chickens in a fenced yard because once they figure out where the good stuff is, they will keep going back for more!

Araucanas are a special breed that is highly sought after due to their bright blue eggs and fun characteristics.

If their lovely eggs don’t have you sold on the breed, their comical physical appearance certainly will. Who doesn’t love a little personality in their flock? 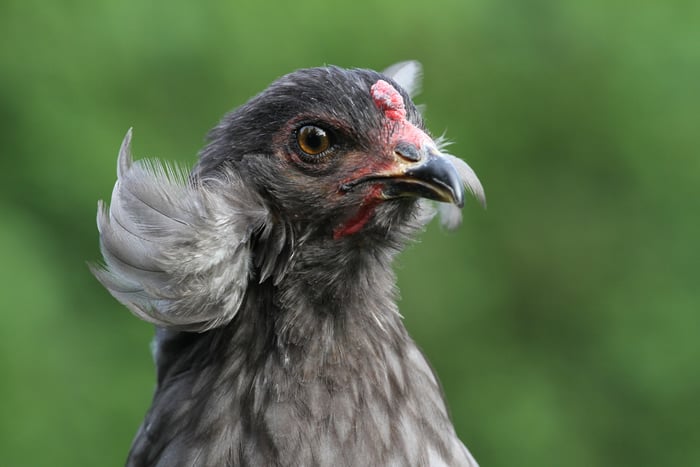 READ NEXT: Easter Egger: Everything You Need To Know About This Chicken 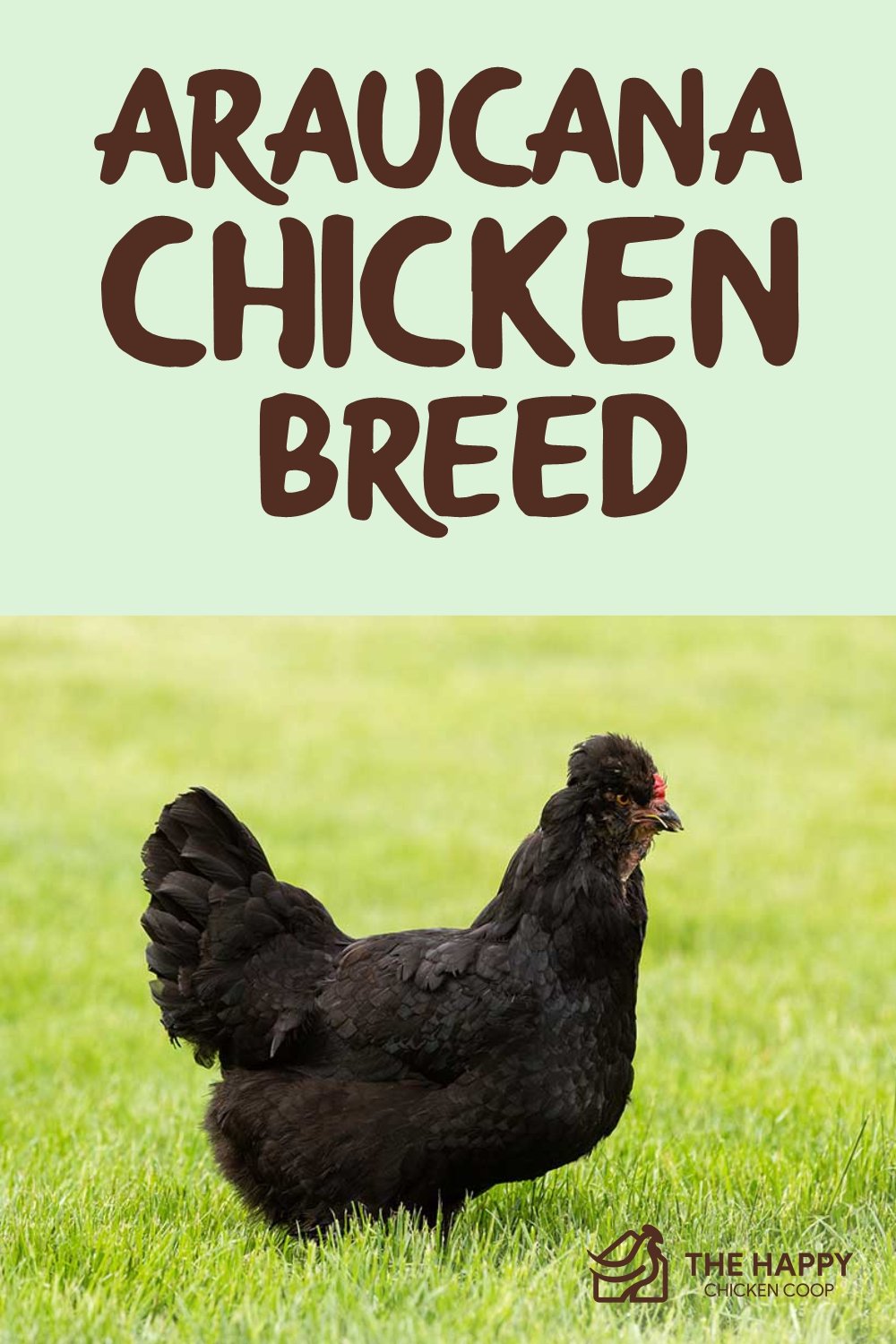 15 thoughts on “Everything You Need To Know About Araucana Chickens”