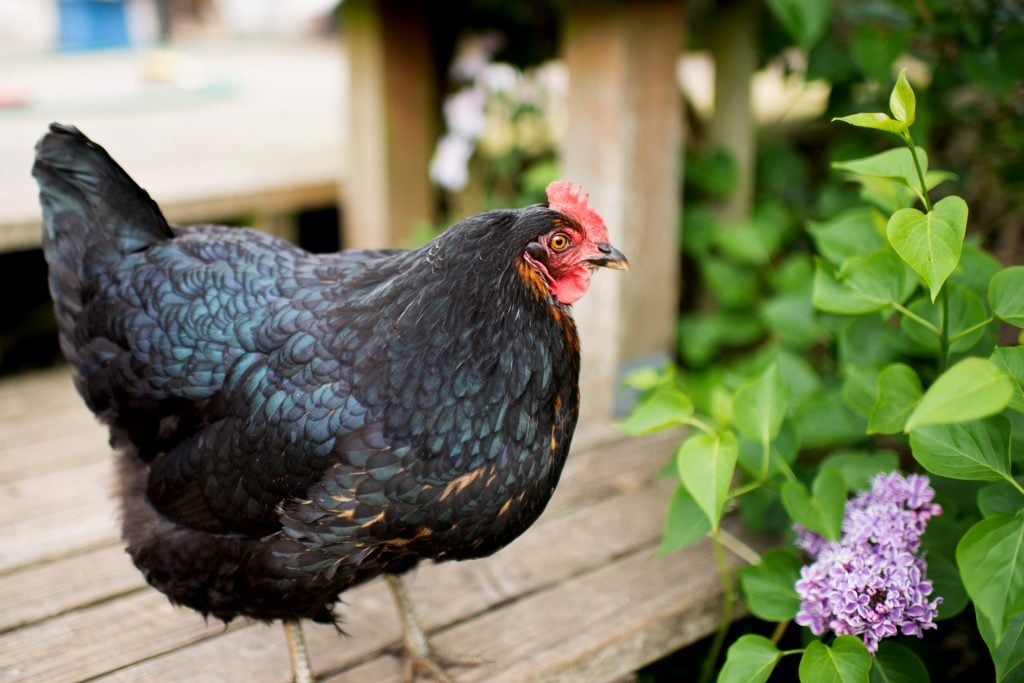 It is the largest purebred chicken in the US and probably the world! The only other breed that comes close is the Brahmas – we will discuss them in a future article.

Once seen, this splendid bird is unlikely to be forgotten since its size alone makes an impression on you. They are, in fact, gentle giants.

Today, we will look at how the Jersey Giant came to be and the benefits this bird offers to chicken keepers and admirers alike.

In addition, we will discuss the size, egg-laying capabilities, and temperament of this wonderful bird. 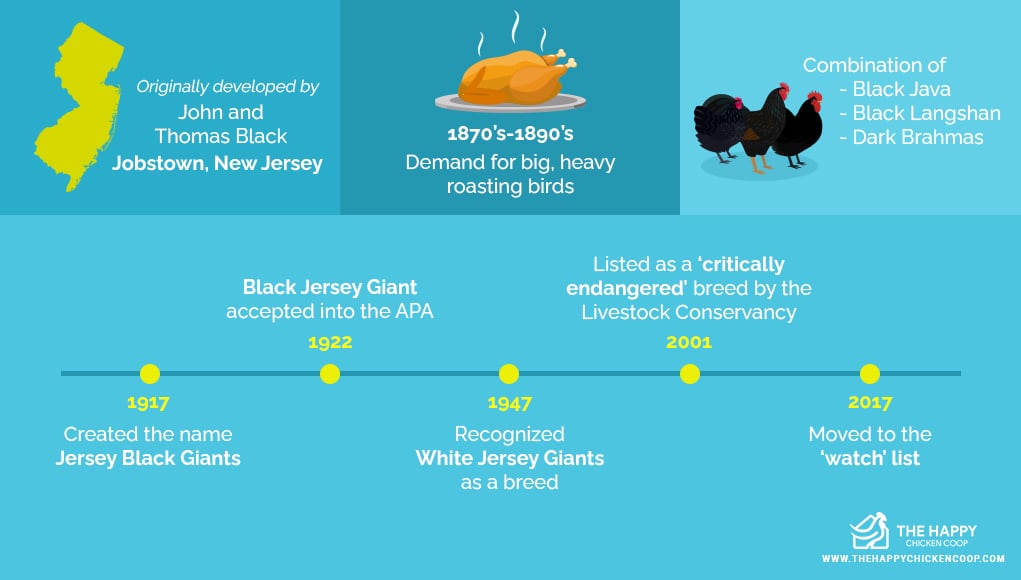 The History of Jersey Giant

Originally developed by John and Thomas Black near Jobstown, New Jersey, another bird was produced to fill a marketing niche.

At around that time (the 1870s’-1890s’), there was a demand for big, heavy roasting birds that would rival, perhaps even surpass, the more common turkey.

Late in the development of this bird, large commercial, broad-breasted turkeys were presented to the public, so the Jersey Giant did not achieve the initial goal set for it.

The brothers used a mix of Black Java, black Langshan, and dark Brahmas’ to achieve the bird they wanted. It’s unclear if they added any other breeds in the beginning.

The name ‘Jersey Giant’ took some time to emerge. Originally they were named ‘Giants’; they then called them Blacks Giants around the turn of the century in honor of the Black brothers.

They created the name Jersey Black Giants around 1917 in honor of the State it was created in.

Originally, they paid little attention to the color of the birds, which led to a variety of colors in the feathering.

However, a breeder named Meloney and a few other breeders worked to make the breed more standardized in color and conformation. He began exhibiting them for the public to see and admire.

His work paid off, and within a few short years, the Black Jersey Giant was accepted into the APA in 1922 as a blackbird.

They created the White Jersey Giant from the ‘sports’ of the black Giant. Sports are offspring that are a different coloration from the parents.

These sports were refined and eventually became the White Jersey Giants. They were recognized as a breed in 1947.

In 2001, they were listed as a ‘critically endangered’ breed by the Livestock Conservancy – now, in 2017, it has been moved to the ‘watch’ list.

They are still considered rare in the US, although backyard keepers are helping this unique bird to regain its’ popularity.

It is yet another fine breed that has been almost forgotten after the advent of the faster-growing ‘industrial bird.’ 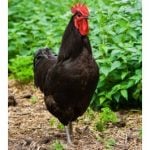 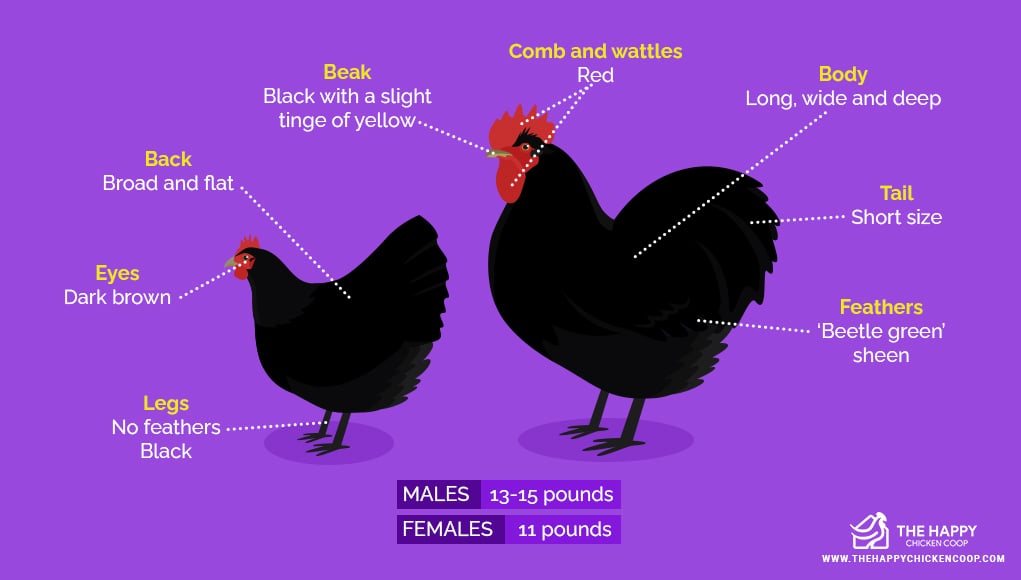 The Black Jersey Giant was admitted to the American Poultry Association in 1922. The White followed in 1947 and the Blue in 2003.

The Giant is a big bird – males can weigh in at around 13-15 pounds, with the females weighing around 11 pounds. The black variety is usually around a pound heavier than the white.

The height of the male bird is usually between 22-26 inches, with the female being 16-20 inches.

The bird has a moderate to a long body that is both wide and deep – giving the impression of a square bird. The back is comprehensive and flat, and a tail that is relatively short for the size of the bird.

As we have already noted, this is a robust bird.

Black Giants should have a ‘beetle green’ sheen to their feathers in sunlight, which is absolutely stunning.

Legs should be black, although they have yellow soles on their feet and four toes on each foot.

There should be no feathering on the legs.

A single comb and wattles should be red. They are yellow-skinned birds.

Their eyes are dark brown. The beak should be black with a slight tinge of yellow at the tip.

White Giants have willow-colored shanks and yellow soles. The beak of the Whites is more yellowish.

The Blue Jersey Giant should have nearly black shanks, occasionally a tendency towards dark willow. The feather coloring should be a slatey blue laced with darker blue.

The feathers on all Giants are “tighter” than most other common poultry breeds, making them easier to clean up before showing or exhibition. It also serves them well in cold climates, and they are good, cold-tolerant birds. 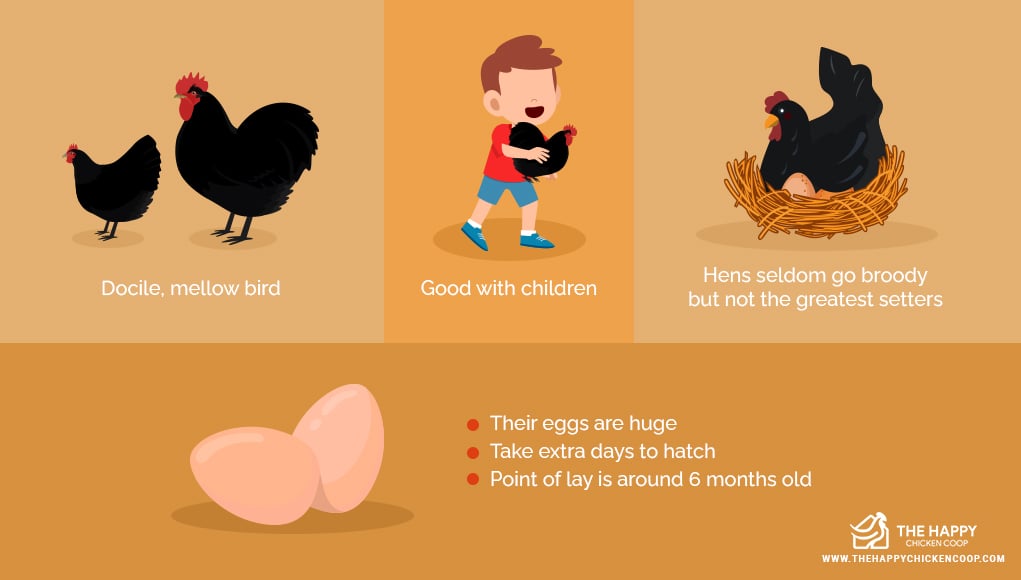 The Giant is a docile, mellow bird in general, even the roosters. They are known as friendly birds, and several folks have kept them as pets rather than their intended purpose of table birds.

They are good with children generally, although their large size can be intimidating to some smaller children since they stand so tall.

The hens seldom go broody, but when they do, they really aren’t the greatest setters because of their weight – sadly, they are prone to breaking the eggs.

The egg size is huge, and because of this size, chicks may take a couple of extra days to hatch. Also worth noting is that pullets may not reach their point of lay until around 6 months old.

However, the Jersey Giant eggs can be set under a regular broody to ensure a continuous supply of quality birds.

Is the Jersey Giant Right For You?

The Giant makes a wonderful backyard bird. It is friendly, gentle, and gets along pretty well with other breeds, and usually, many other chickens will not mess with a Giant because of the size!

They are steady, not flighty, so they are easier than some to handle, and they don’t fly.

They forage well and enjoy the ability to roam and exercise, which helps with muscle development.

Due to their large size, they are not easy prey for hawks. If they are to be totally confined, coop space should be minimally four square feet/bird – more is better, and several sources recommend eight square feet/bird.

Eggs are huge, light to medium brown in color.

However, where the Giant really stands out is in meat production. The meat is said to be excellent, and one bird can easily feed a family of four.

Having said all that, Giants are not quick to mature. It will be at least six months before a rooster will tip the scales at ten pounds.

Most people who raise them say that they build frame the first and flesh out the second year, so if you want a quickly maturing meat bird – this bird is not for you.

Although they eat standard rations, they should be regularly given vitamins and minerals for bone strength and development. It is important not to skimp on the nutrition they need; it will lead to bone and muscle weakness problems.

If they are allowed to free-range, they will gather many of the nutrients they require from the land.

The cost of feeding such a large bird is an important factor to consider when selecting your breed. The Jersey Giant will cost you more in feed over time since they eat more and take longer to mature.

Considering their weight, perches in the coop should be placed a bit lower to the ground than standard to avoid leg injuries, and the perches themselves should be robust.

Other than considering possible leg injuries, the bird does not suffer from any unusual maladies or genetic problems. In fact, it is a robust and healthy breed.

Obviously, this bird is really not the best choice for city living, but the Giant is an excellent choice for anyone with the prerequisite space.

In addition to leg injuries, this large breed is prone to contracting bumblefoot due to injuries.

Large breeds land harder than other breeds, and the Jersey Giant lands the hardest.

If there are any sharp objects, or stones, under the porch of a Jersey Giant, and she lands on it and punctures the bottom of her foot, she becomes susceptible to infection, bumblefoot, and possibly death.

This is just one other reason to keep your perches and roosts close to the ground. If your giants are free-range, you will have very little control over their actions.

Even though the Jersey Giant is not a big flyer (due to their size), their curiosity may lead them to new heights.

If you keep an eye on your birds, you can usually catch bumblefoot quickly and treat your chook before the infection takes off.

Keep an eye on your free-range Giants and watch for limping (one of the first signs of bumblefoot).

Although there are a few extra considerations to consider when having Jersey Giants, mainly in space, feed, and height requirements, they really are an easy bird to raise.

If you have a larger family and wish to raise your own birds, the Jersey Giant may be a great fit for you.

They are certainly not for the folks who wish to raise a table bird in under a couple of months, but the wait is worthwhile.

They are becoming a favorite amongst the ‘slow food’ crowd who prefer the bird’s taste to the speed at which it’s raised.

This is a superb bird worthy of the time and effort required in raising them. If you have space and ability, give them a try – you may grow to love them!

Do you own Jersey Giants? We would like to hear your stories about this breed in the comments section below…

READ NEXT: Bumblefoot in Chickens: The Complete Care and Treatment Guide 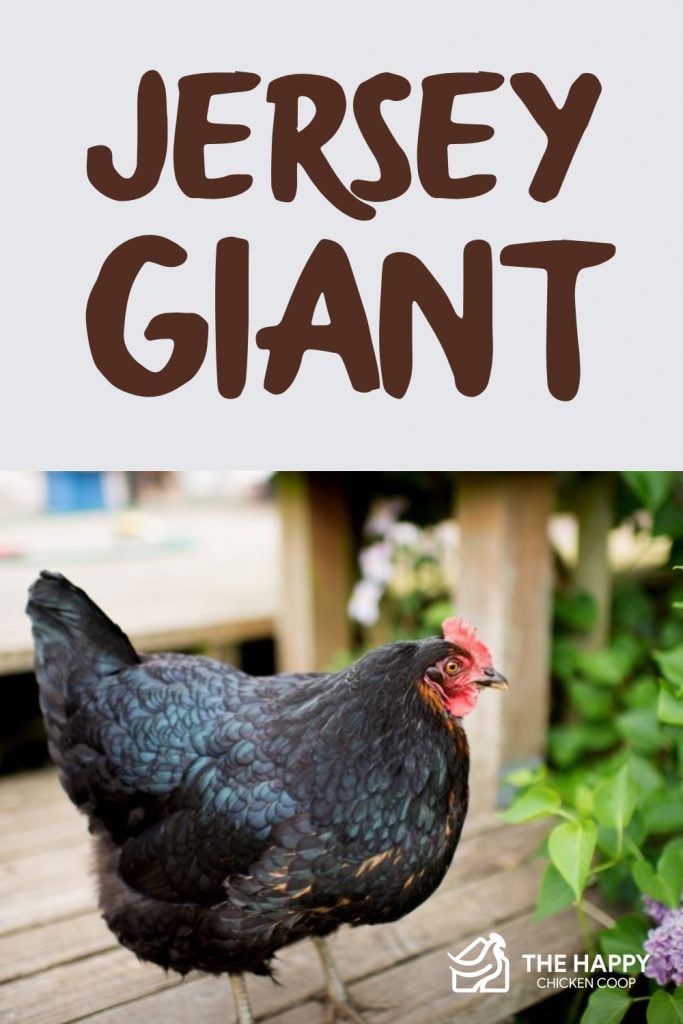