Guinea Hen: What is a Guinea Fowl, Eggs, and All You Need To Know (Complete Care Guide) 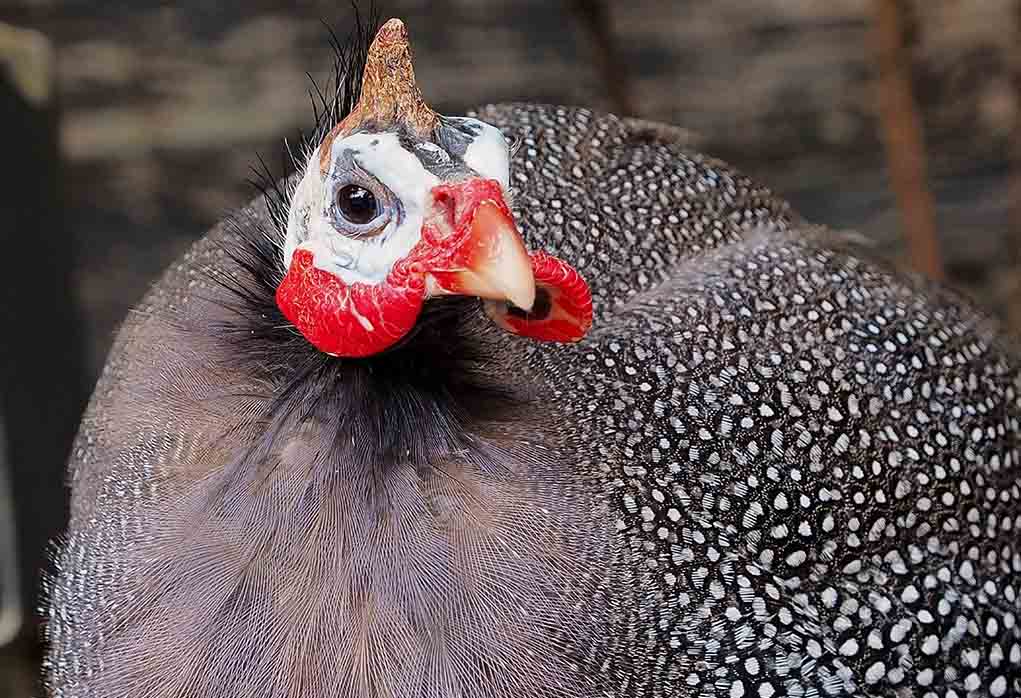 Guinea hen’s popularity seems to be on the rise. They go by several names, but the most common are Guinea Fowl and Pet Speckled Hen.

These peculiar-looking birds are quite the talk of the town wherever they are seen. Guinea chickens are a strange-looking bird to be sure, once seen, never forgotten.

They are dramatically different from chickens in personality and habits. However, if the owner is prepared, they can make a wonderful bird.

They are not for everyone, but if you think you might be interested, keep reading to learn their history, how to care for them, Guinea fowl eggs, expected temperament, and much more! 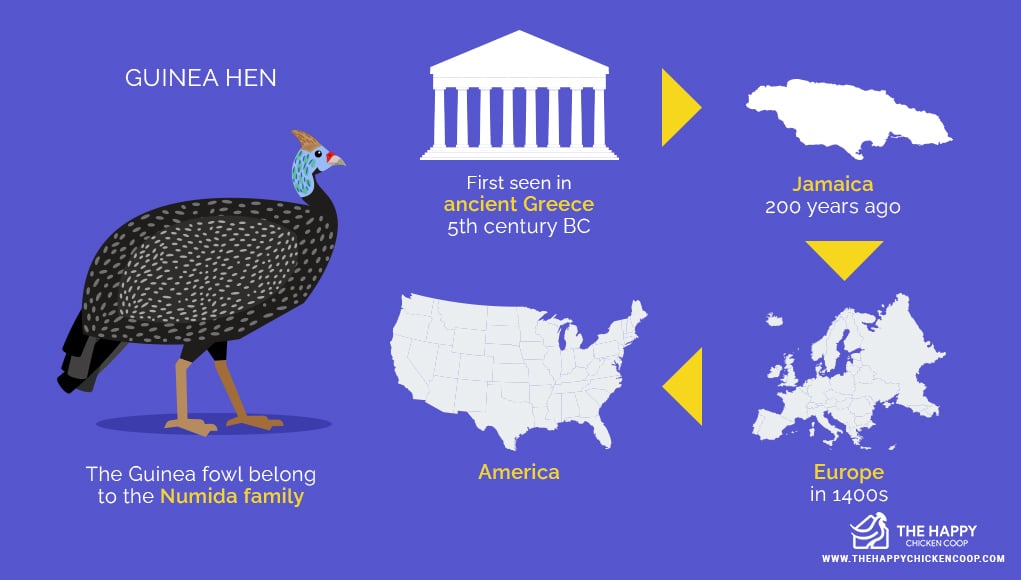 History of the Guinea Hens

The Guinea fowl belong to the Numida family – they are related to pheasants, turkeys, and other game fowl.

There is some evidence to suggest that Guinea fowl were known as far back as ancient Greece around the 5th century BC.

The Romans brought them back from their African campaigns and tried to domesticate them. They were semi-successful in this venture, raising them on farms.

Romans were able to raise them but never really tame them.

The home of the Guinea fowl is Africa, where they run wild in large flocks. Some were taken to Jamaica about 200 years ago, during the slave trading era, becoming part of the landscape.

To this day, you can find Guineas running wild in Jamaica!

Guineas were first introduced to Europe back in the 1400s and made their way to America with the early settlers and slave ships. 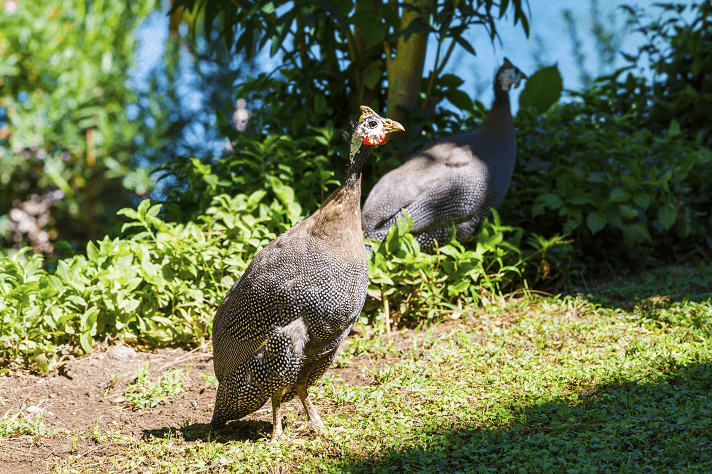 There are several different types of guinea fowl, but the most often seen and ‘domesticated’ is the helmeted guinea fowl.

Guinea fowl come in various colors, including pearl, white, royal purple, coral blue, buff, chocolate, and bronze, to name a few. However, not all of these colors are recognized by the official standards.

In the US, only the helmeted Guinea fowl is recognized. The colors of the bird that are recognized are lavender, pearl, and white.

Guinea is about the size of a large chicken and, when fully grown, will weigh around 4lb. The Head and neck area is bare skin, which helps to regulate temperature.

The coloration of the skin is a combination of blue, red, and black hues, giving it a somewhat clownish appearance.

With short, rounded wings and a short tail, it looks oval-shaped.

Their beak is short but curved and very stout. The wattles on the male are larger than the female, although some do not have wattles.

These birds do not reach sexual maturity until their second year, making it very difficult to sex them.

Each gender has a different vocalization, so this can help differentiate the two. The female will call what sounds like ‘buck-wheat.

The males will only emit a ‘chi, chi, chi’ sound. 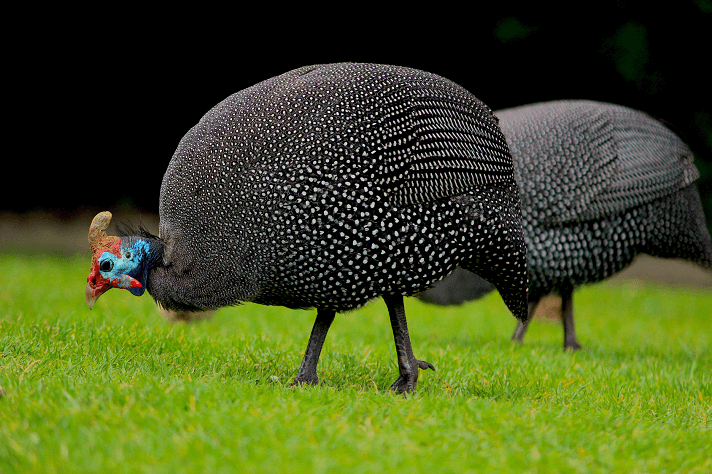 Guineas are highly social with their own kind; where one goes, they all go. If one gets lost, it will call out until the flock comes to find it.

They can co-exist with other species, such as chickens, but you must take care of male Guinea fowl. The males can become very territorial and will run off any roosters in your flock.

They can be bullies to smaller birds, and the pecking order can become very brutal, but if you raise them with chicks, this is usually less of a problem.

Since they are semi-domesticated at best, it is not unusual to find them roosting in trees or other high places come dusk.

Each evening, many folks entice them into the coop with fresh water and a feed/cracked grain mix.

They apparently dislike entering a dark place, so you should keep a low output light bulb until they are all settled in.

If you decide to keep your guineas in confinement, they need 2-3 square foot space per bird. Any less and they are likely to become stressed.

Remember, these are semi-wild fowl and do not generally thrive in confinement.

These birds are monogamous and mate for life in the wild. Occasionally there will be a philanderer, but it is the exception, not the norm.

In a small farming situation, the ratio of male to female is often 1:5, which seems to work well. 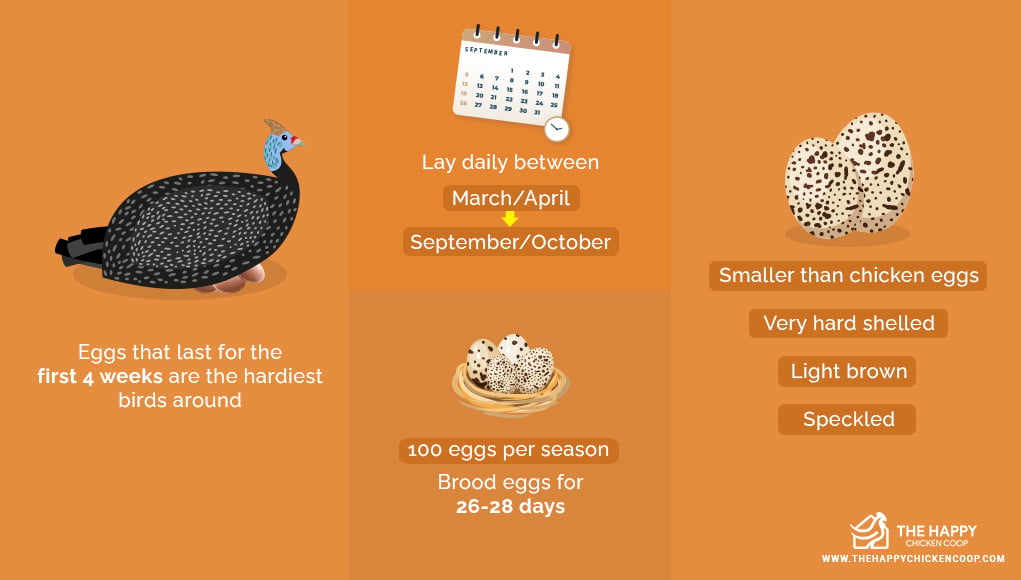 Guinea fowl are seasonal layers. Depending on your location, they will lay daily between March/April to September/October; on average, a hen will lay around 100 eggs per season.

Their eggs are smaller than chicken eggs and are very hard-shelled. The eggs are light brown and speckled and are also vibrant eating.

Guineas aren’t fussy about where they lay an egg. Anywhere they happen to be will do.

However, when they decide to make a nest, you will be hard-pressed to find it! They prefer woods, long grass – anything that will hide them from predators.

The male will stand guard for the hen and watch for danger during the daylight hours.

Often Guineas are ‘communal’ layers, all laying in one nest until there are sufficient eggs. 50 is not unheard of! The hens can be communal brooders, too, taking turns in nest sitting.

If you want to collect the eggs for hatching or eating, it is best to keep them penned until around noontime – they should have laid by this time, making it much easier for you to collect them.

They will brood the eggs for 26-28 days until the keets hatch. They must then follow their mother back to the flock.

Many do not make the journey. They are very susceptible to cold and wetness before 4 weeks of age to die from hypothermia and predation on the long march.

Those who make it through the first 4 weeks stand a good chance of becoming adults and becoming one of the hardiest birds around. 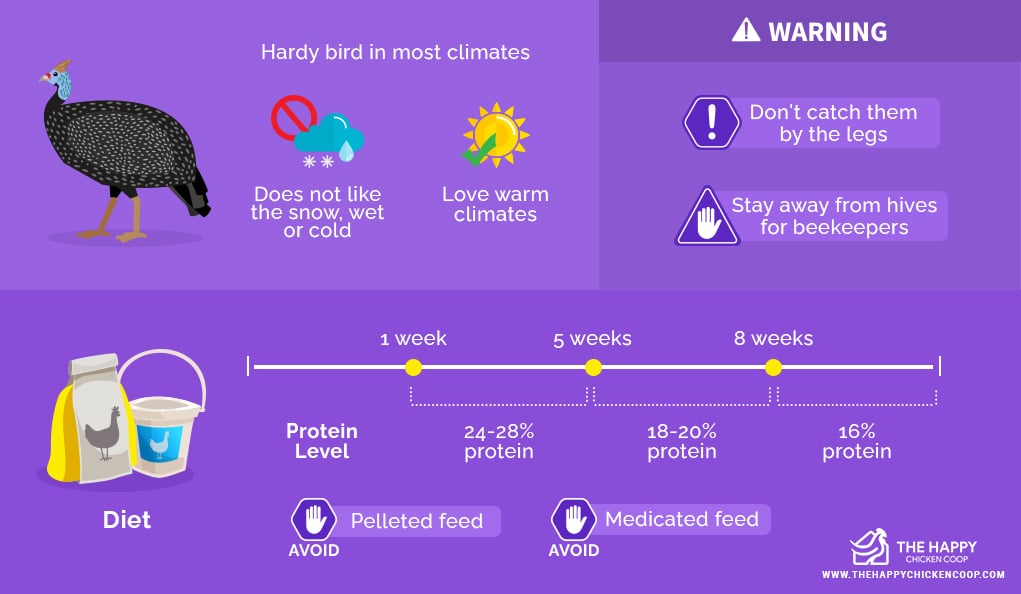 Because of this, Guinea chickens have almost no health issues to speak of.

This is an extremely hardy bird in most climates but does not like wet or cold snow. They come from Africa originally, so climate problems are to be anticipated.

Being endemic to Africa, they prefer warm climates. If you keep them dry and draft-free, they will do just fine in their housing.

A word of caution for catching them: never, ever catch them by the legs. They can turn around so quickly that they may break or dislocate a leg.

If you are a beekeeper, you will need to protect your hives against the Guineas. Otherwise, they will sit outside the hives and snap up bees as they emerge.

What Do Baby Guinea Fowl Eat? The Keets’ Diet

The feed should be mash or crumbles. Pelleted feed is not recommended. Also, medicated feed is highly toxic to Guinea fowl – needless to say, do not allow them to eat it.

Is the Guinea Hen Right for You?

They have been raised in captivity for thousands of years but have never truly become ‘domesticated.’ The Helmeted variety that is commonly kept is far tamer than its relatives.

Still, even so, it is not a cuddly bird.

They dislike being picked up and held and are likely to scream ‘murder’ if you do so – definitely not a lap bird.

Guineas are great entertainment to watch as they patrol your yard, chattering away all the time.

They are great at ridding your yard of ticks, insects, small snakes, and rodents; outstanding pest patrol. In fact, just the call alone of the Guinea fowl deters rodents from the area.

They also make great alarm callers – anything new or out of place will elicit the alarm, which can be annoying or reassuring depending on the outlook!

If you live in an urban setting or have close neighbors, check the local zoning laws. Guineas are known to be loud, so there may be a ban on keeping them.

For example, our neighbor used to keep them, he lives ¼ mile away, and if anything happened in the yard, we knew about it!

What Are Guinea Hens Good For?

Guinea hens are great for gardens and are used to keep insects like: wood ticks, grasshoppers, flies, crickets, and others under control.

Is a Guinea Fowl Good to Eat?

Yes! Guinea fowl are completely edible for human consumption. You can raise them for both meat and egg production. You can eat them just like most poultry: turkey, quail, chickens, ducks, geese, and even emu!

Can Guinea Fowl Live With Chickens?

Yes, chickens and guinea fowl can be kept in the same coop, with a caveat. You should make sure your guineas have plenty of room for egg laying. They will hold off on laying if there is a lot of commotion in the coop.

The Guinea Fowl is definitely an acquired taste. They are not for everyone. They are quite long-lived for a bird that isn’t terribly smart; 10-15 years is the average life span.

The benefits they offer are: pest and rodent control, decreased need for pesticide use, guard bird, low maintenance, cheap to feed, and entertainment.

The negatives: noisemakers can be bullies, rotten mothers, not blessed with intelligence, and taking free-ranging to a new dimension.

Many folks love their Guineas unreservedly and wouldn’t be without them. Others wish that they had never even heard of them!

In researching this piece, it seems that those who were well aware of the ‘Guinea lifestyle’ were better equipped to deal with this bird’s quirks.

In other words, don’t buy them just because they look pretty – do your homework first. They can be a challenge if you are unprepared for them! 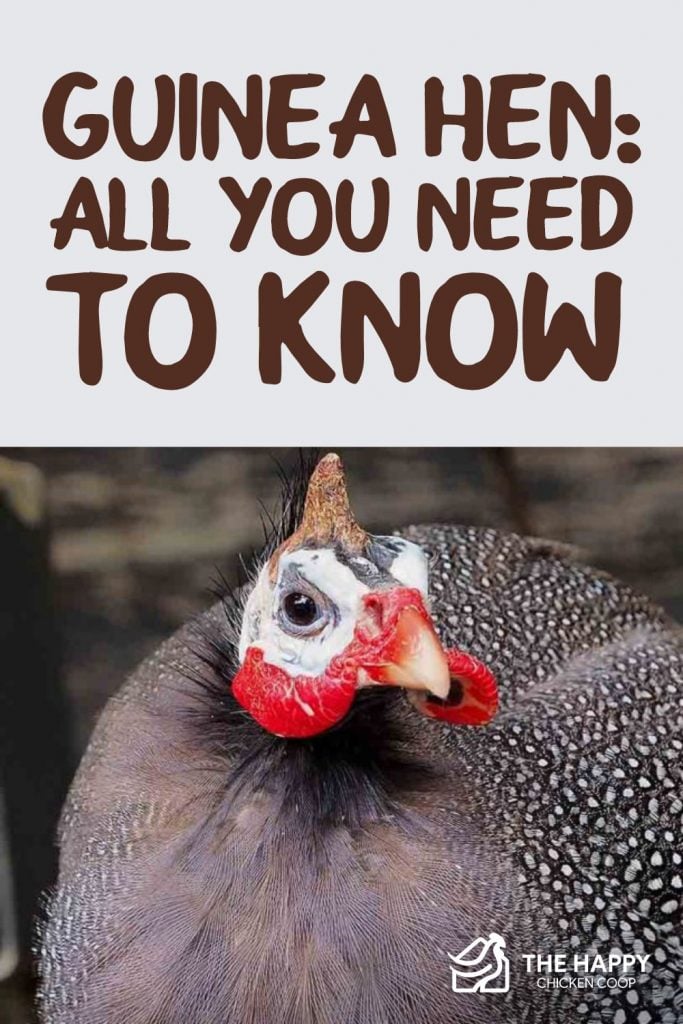 139 thoughts on “Guinea Hen: What is a Guinea Fowl, Eggs, and All You Need To Know (Complete Care Guide)”