Raising Turkeys and Chickens Together – Can You and Should You?

Poultry enthusiasts often dabble with different species of birds. One of the questions that comes up often is,  “Can I keep chickens with other kinds of poultry?” or “Can I have a mixed flock?” The short answer is YES, you can. But should you?
Generally speaking, ducks, peafowl, and turkeys can certainly be kept on the same property together, and they would coexist very well. Most types of poultry prefer to spend time with the same kind of poultry.  Chickens like chickens, ducks like ducks, and turkeys like turkeys. Aside from a few health concerns and logistics, there aren’t many reasons to keep chickens separate from turkeys. 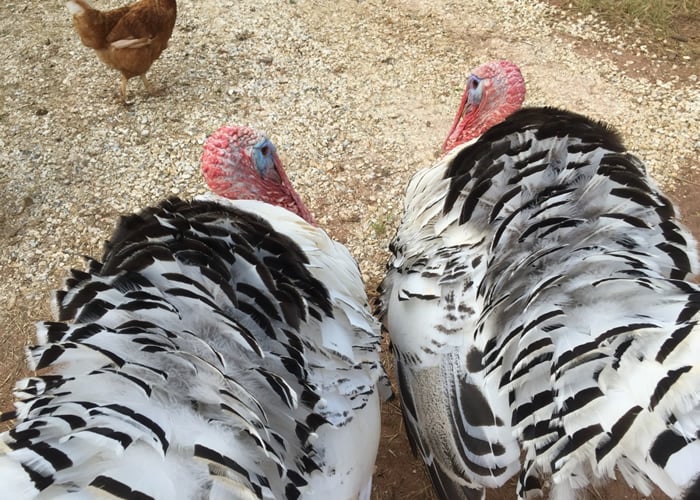 Here are a few things to consider before raising chickens and turkeys together:

Brooder temperatures are going to be very similar for both turkeys and chickens, however, chickens are raring to go right out of the egg. They can be a bit more flighty and aggressive than a turkey chick, and therefore, the turkeys may get trampled and pecked. This can weaken an already fragile baby turkey and in this condition, it may not thrive.
Aside from the erratic behavior of the chicks, the turkeys need to be fed a different diet than the chickens. There are specific types of feed, or mash, for turkey chicks that will provide the babies with the proper amount of protein. While chick starter does have protein, it is not quite enough for the turkeys, especially if they are being raised for the dinner table.
While having a brooder nursery full of both chicks and turkeys may sounds adorable, it isn’t quite fair to the turkeys. Keeping them separate in the brooder gives them both equal chances at survival.

Turkeys usually prefer roosting in the outdoors, but for those who are in tough weather conditions and with no access to a good enclosed run, this is probably not an option. So in the coop they go! Now if you are going to have turkeys in the coop with your chickens there are several things you need to keep in mind.
First, turkeys are larger! You will need to recalculate how much roosting space you have for your flock. Turkeys will naturally take up more space than chickens.
Second, turkeys feet are larger. I typically use a small branch for the roost but turkeys feet are larger and will fully wrap around it. This means that when the turkey sits down on the roost its feet will not be completely covered by its feathers, rather, they will be exposed in the cold weather and potentially be frost bitten. This can be addressed by putting a thicker roost branch or even a 2×2 or 2×4 instead. Some of our readers have very beautiful and intricate chicken coops and this may not be as easy as just swapping a stick out.

If there is a reason to keep chickens and turkeys separate, it is blackhead disease. It is a major concern for farmers keeping both chickens and turkeys. Chickens and turkeys can spread diseases to one another, and blackhead disease is one of the most common diseases that is spread between the two birds.
Blackhead disease is caused by Histomonas Meleagridis, which is a protozoan that resides in a parasitic cecal worm egg. This worm is expelled by the infected bird, through its droppings, and then eaten by another bird directly from the feces or through other means, such as an earthworm that has eaten the worm egg.  In other words, it is often carried by an actual earthworm, that is then eaten by a chicken or a turkey.  It is a vicious cycle that is very difficult to put a stop to once it has started.  This protozoan can survive in the ground for approximately three years if the conditions are right.
Chickens are less susceptible to blackhead disease than turkeys.  While they are not immune, they may show only some of the symptoms, and in some cases die. Egg production may drop and they may experience weight loss. Turkeys often show signs of lethargy, weight loss, and drooping wings. Turkeys do not often survive the disease.
Unfortunately, chickens may simply become carriers of the protozoan and the owner may not know the flock is infected with the disease until it is too late. According to the FDA, there is no cure for the disease and, “Turkeys are highly susceptible to blackhead disease. Once a turkey flock has been infected, 70 to 100% of the birds may die.”
If a farm becomes infected with blackhead disease, the only way to truly get rid of it is to remove the poultry and wait three years to be sure it has died off. Even after that, there is no guarantee because wild birds carry the disease as well.  If an infected turkey walks onto the farm and leaves some droppings, a perfectly healthy flock may contract the disease without anyone even realizing it.

Many people raise turkeys for the purpose of serving them— as dinner that is,  in the Fall. Since growth rate, and dressed weight, is almost always an important factor, they should be kept on a high-protein diet. This will most likely mean that turkeys meant for the table will need to be kept separate from chickens. If laying hens consume feed with higher protein than the typical layer feed formulas, it won’t hurt them; however, laying hens need much less protein and a lot more minerals to stay productive and produce sturdy eggs year round. On the other hand, meat chickens, that consume feed meant for turkeys, will grow too fast.  This will lead to earlier health issues than normal. Since Cornish crosses are practically engineered to grow fast on a high-protein diet, eating even more protein would be too much for them.
With that being said, turkeys who are not being raised for the dinner table, and are meant for more of an ornamental purpose, will do just fine with chicken layer feed.

Can Turkey Eggs Hatch Under A Broody Chicken?

A broody hen can definitely be used to hatch turkey eggs and even duck eggs. If you have a very committed broody hen who you know has sat for a longer period of time on her eggs. Turkey eggs take approximately 28 days to hatch while chicken eggs take approximately 21 days. Ducks, if you were interested, also take 28 days. Your hen would need to stay an extra 6-7 days on the eggs, which many have done successfully. They also make great mothers and turkeys learn from mother hens quickly. 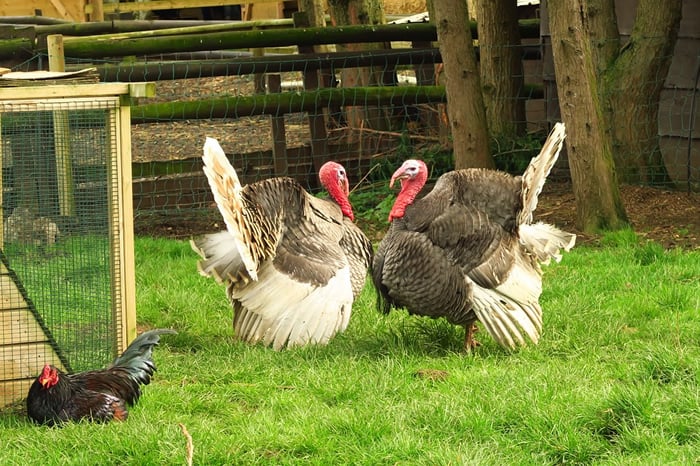 Turkeys spend very little time concerning themselves over the things that will send a chicken into a 10-minute squawking fit.  They are less flighty, slower moving, and overall just a little more “zen” than chickens. So, keeping the two in the same area really doesn’t cause too much drama. In fact, turkey hens often act as a mediator of sorts amongst chickens. They have been seen breaking up fights, and in some cases, getting an unruly rooster under control. I remember one time my good friend has a larger flock of turkeys that would patrol the grazing fields and always act as the mediators when a good pecking fight would occur.
Blackhead disease is a scary condition to contract on a farm full of feathered friends. Before making the decision to keep poultry together, new owners should take the time to research the disease and talk to local veterinarians about the possibility of the disease in the area. If keeping turkeys as pets, it is much easier to keep chickens and turkeys together—and a lot more fun. They can easily coexist in harmony if everyone is healthy and given the appropriate portions of protein. 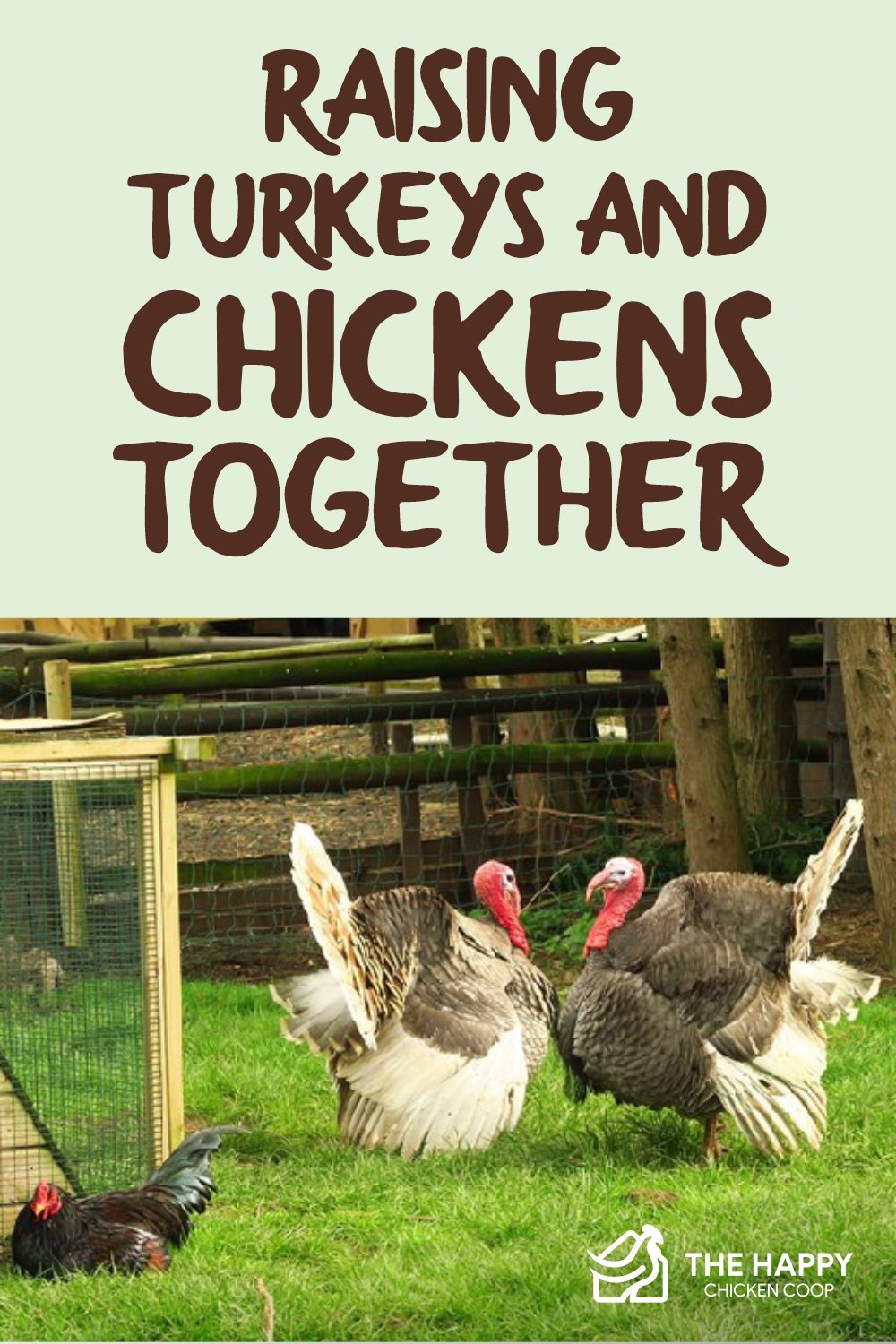 15 thoughts on “Raising Turkeys and Chickens Together – Can You and Should You?”