What You Should Know About Raising Chickens And Ducks Together 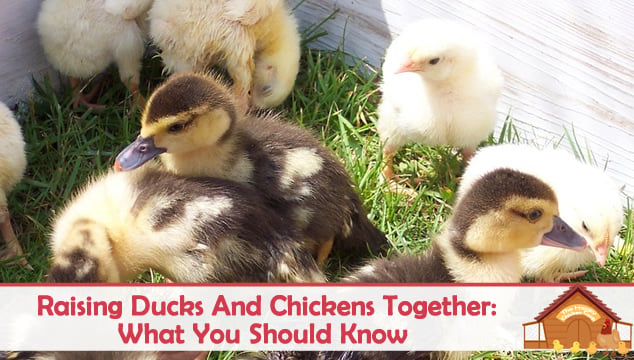 It’s only a matter of time before a chicken lover decides it’s time to add a duck, or five, to the flock. With their adorable good-looks, and humorous farm antics, ducks are extremely hard to resist and quickly becoming a homesteading staple alongside the chicken.


It has been said that ducks are the new chickens, and it isn’t hard to see why. Ducks lay beautiful, large eggs all year, and tend to be friendlier than chickens, making them fun family pets. I remember our first two ducks, they were quick to become attached to the children and they just would not separate. If they lost site they would cry after them until the little ones would return. They grew out of the separation anxiety but it left an imprint of how friendly and attached ducks can be.
While chickens and ducks can be raised together, there are certain differences that any owner should take into consideration when adding new fowl to their flock. Keeping chickens and ducks together requires a little bit of tweaking to coops and equipment.

Ducks naturally go hand-in-hand with water, but it’s possible to keep ducks without a pond or small pool (make sure to read our duck breeds guide to see compatibility) although they will most likely set out to find one elsewhere. They love to splash, throw water around, and generally make a muddy mess, but ducks won’t be like fish out of the water if they don’t have a kiddie pool of their own.
Chickens, on the other hand, prefer to stay dry at all costs.  Unlike ducks, chickens do not have waterproof feathers that keep them dry and warm. So, if a chicken gets unnecessarily wet, it can become chilled or sick. Ducks have oil glands that are activated when they preen their feathers.  This oil keeps their feathers waterproof. To observe this you can follow these instructions.
What is interesting about a duck’s love of water is that it isn’t just because they love to swim. Chickens obviously need hydration, but ducks need water for two other reasons:
1)    Ducks use water to help aid in digestion – ducks will take a bite of food and swish it around with water. This makes it much easier for them to digest.  Chickens on the other hand need grit to digest their food. Both use external elements to aid in digestion.
2)    Ducks use water to clean their eyes and nostrils. A duck can get quite dirty, and buildup can form in their nose and eyes. They naturally know how to clean up by dunking their head in water to clear away the gunk.
This is all fine and dandy, but it also means that ducks love to make a mess so keeping waterers out of the coop will ensure that the area used for sleeping, protection, and nesting will remain clean and dry. A dirty, humid, enclosed space is bacteria’s favorite place to live and thrive. For this reason, I opt to keep all waterers for chickens and ducks outside the coop. There are special waterers that you can also look into that keep themselves clean by design.
Additionally, ducks cannot easily use most water fonts that were made for chickens. Their cute bills are much larger than a duck’s beak and thus they may outgrow little founts as they mature. Additionally, a small kiddie pool will meet the ducks’ needs well enough, and while chickens will drink from, and maybe even wade around, the pool on a hot day, they most likely will not be doing cannonballs.

Luckily chickens and ducks can eat the same kind of feed as adults.  However, chicks and ducklings can only eat the same type of starter feed if it is unmedicated.  Because ducks tend to eat much more, and faster, than chickens, they can consume too much of the medicated feed and become sick. Ducklings should have access to additional niacin. This can easily be accomplished by adding brewer’s yeast to the food dish. To avoid any issues with overfeeding it is often easier to just keep young birds in separate brooders. Read our duck feeding guide here for duck specific feed advice. 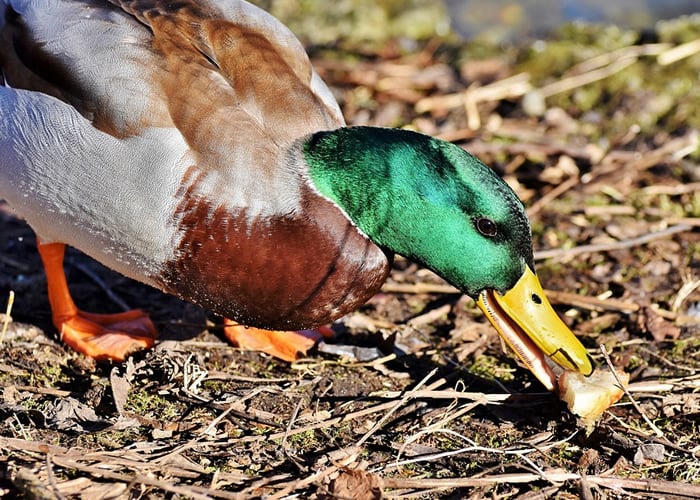 In addition, different types of feeding bowls should be kept for the chickens and ducks because, once again, a duck will have a harder time fitting its bill into the feeding dishes most commonly used for chickens. When they are small, this isn’t as big of a problem as it is when they are older. I learned that ducks are very sloppy and messy eaters and it just not mix well with chicken feeders. You can experiment on your own but I always recommend starting off with separate feeders.
Happily, chickens and ducks enjoy the same kinds of treats.  Since they are both omnivorous animals, they like to eat plant matter and meat morsels. Yum!

For the most part, chickens and ducks don’t mind sharing a room at night.  Ducks tend to be chatty Cathys at night and this may disturb the chickens’ beauty sleep. Ducks are like a playmate at a sleepover that won’t turn in for the night; giggling and playing while everyone else just wants to get some sleep.
It will work, but if chickens could talk they would probably tell their owners how annoying their playmates are at night.
Chickens and ducks won’t roost together because ducks prefer to nest on the ground while chickens enjoy perching as far off the ground as possible.  Nesting material for ducks is just as important as a perch is for chickens.

Generally, chickens and ducks are considered acquaintances rather than friends.  They may share some of the same spaces but if given the opportunity, they will most likely go their separate ways during the day. Unlike chickens, ducks do not place much of an emphasis on pecking orders. Ducks may squabble a bit and and move on.  Chickens seemingly obsess over who is at the top. So, it is true that chickens tend to be a bit more aggressive than ducks toward one another. This can be dangerous for a duck who is not interested in establishing pecking order.  A Chicken’s beak and talons are sharp and can do damage to a duck who is less equipped to do battle with such a foe.

It is possible to keep a rooster and a drake together in the same flock if they were raised together, otherwise, they may become aggressive toward each other.  This will all depend on the temperament of the two males. Keeping drake without a rooster could be deadly to chicken hens due to the aggressive nature and anatomy of a drake. During mating season, drakes can easily injure a chicken hen; therefore, keeping a protective rooster would be beneficial. Typically, having enough hens around for everyone will mean there is less to fight about.  The more the merrier!

Chickens and ducks are both plagued with their fair share of diseases and health concerns, but ducks tend to be quite hardy. Amazingly, they have a higher body temperature than chickens and this  can prevent external parasites, like mites from infesting ducks, thus fewer ways to contract diseases.
Generally speaking, the best way to keep any flock healthy is to keep it clean. Since ducks love to make a mess, feeders, waterers, and even bedding can become perfect places for bacteria to thrive, so it is extremely important to keep living quarters clean.
Adding ducks to a flock of chickens can be an exciting new adventure for any chicken owner, and vice-versa. Ducks and chickens can coexist peacefully if given adequate space, with a few tweaks here and there.  Generally speaking, they will probably go their separate ways once the coop door opens in the morning.