Hen Vs Chicken: Do You Know The Difference? 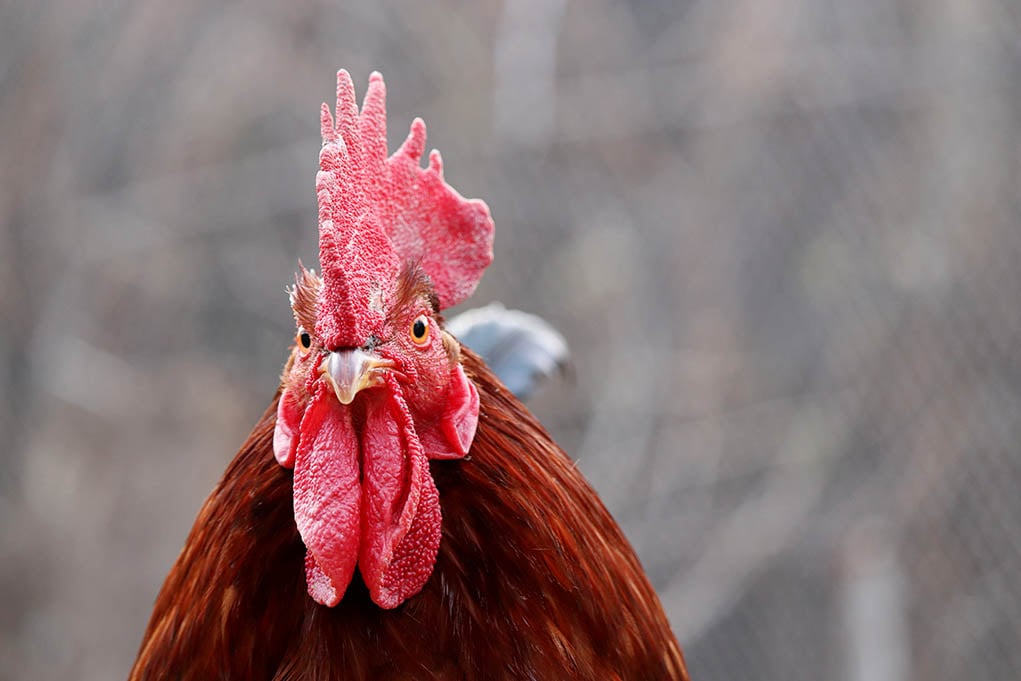 For those of us who love our chickens and their endearing little ways, the difference between a chicken and hen might seem like a ‘no-brainer.

But, if you have never raised chickens, then it’s a fair question.

It’s one of those questions that we chicken folk doesn’t even think about – but what actually are the differences between a hen and a chicken?

Read on and find out, maybe you will find something you didn’t know…

What Is A Hen?

After a chicken lays their first egg, it will be considered a hen.

She will now be noticeable to the rooster’s eyes, and he may well start to woo and court her.

Healthy hens will lay eggs as often as her cycle tells her to. A hen has no control over this. She will lay through the first year and then stop laying as her first molt starts.

She will start laying once her feathers are grown in and continue to lay for several more years until ‘old age.’

When does she stop laying? That depends on the breed and the individual hen.

Most heritage hens will lay into their 3rd or 4th year, while hybrids will be lucky to see the 3rd year of laying.

Of course, they do lay sporadically after that time, but not very reliably.

What Is A Chicken? 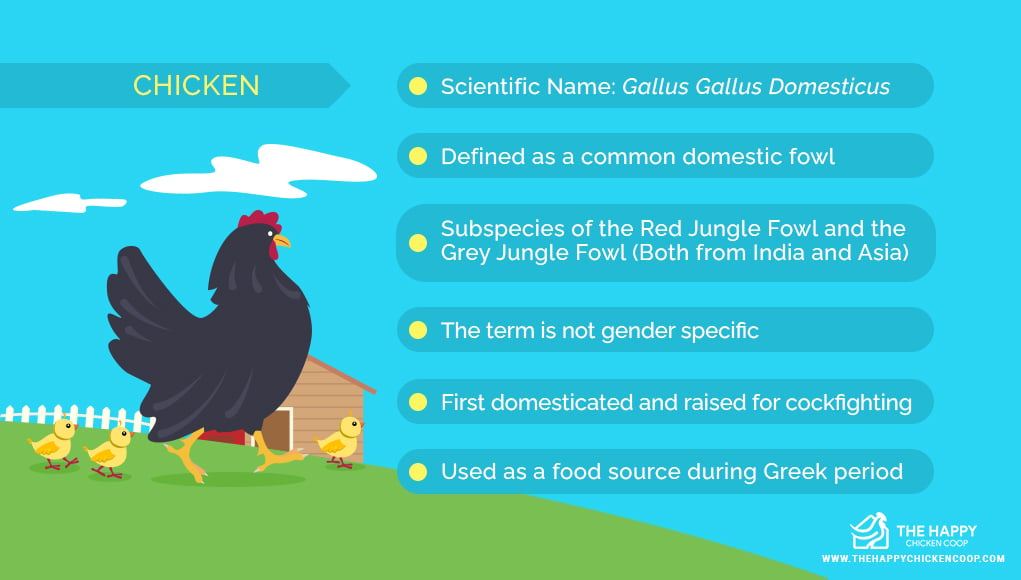 The dictionary defines a chicken as a common domestic fowl (Gallus Gallus Domesticus). It is a subspecies of the Red Jungle Fowl and the Grey Jungle Fowl, both from India and Asia.

Many people use the term chicken to talk about a hen or rooster. The word chicken is not gendered specific.

If you think of chicken as the species name – like human, dog, cat, etc., it will make better sense.

The ancestors of todays’ chickens were first domesticated and raised for cockfighting purposes. It was not until the Greek period that they were actually used as a food source.

The ancient Egyptians even built special rooms in which to hatch chicken eggs.

What Is A Pullet? 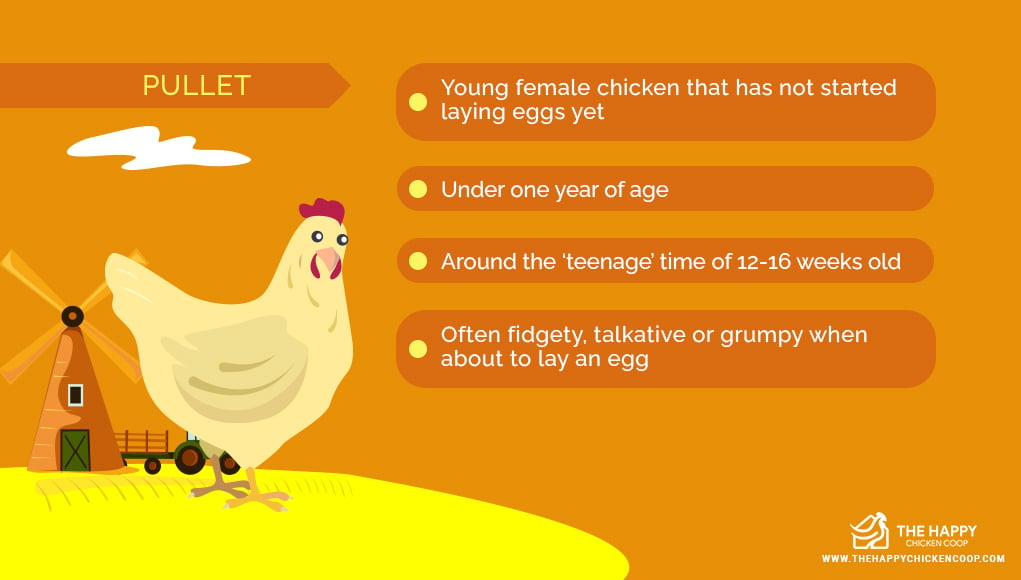 Some folks say that a female chick is a pullet. Whilst that is technically true, the generally understood definition of a pullet is a female chicken at around the ‘teenage’ time of 12-16 weeks old.

Another definition you will hear is that a female chicken is a pullet until her first molt.

Since pullets can start laying eggs at 16 weeks and avoid a molt until almost 18 months old, that definition is slightly off. Sometimes you can buy started pullets.

These are pullets that are approaching the point of lay but have yet to lay an egg.

What is the point of lay? It is the time in a pullets’ life when she is preparing to lay her first egg.

She will be fidgety, going from nest to nest, even making a new nest, talkative, and perhaps a bit grumpy.

This time of life is unsettling for her since she doesn’t know what is happening to her.

Once she has laid that egg, she will become a hen and be accepted by the older ladies as a fully-fledged member of the flock, and she will settle into her routine after a few weeks.

What Is A Cockerel? 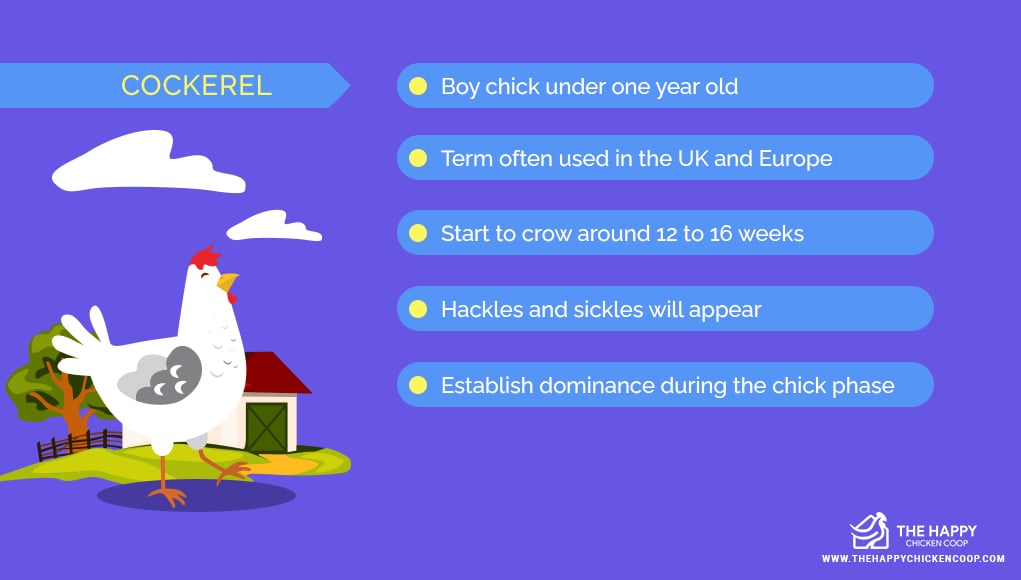 A boy chick is known as a cockerel until he is 1 year old; at this point, he becomes a cock or rooster, depending on where you live.

The term cockerel is used in the UK and Europe. In the US, the more general rooster is used.

Cockerels will start to crow around 12-16 weeks, although some breeds do start earlier.

Those first crows are rather pathetic, sounding like a squeaky toy or someone gargling. However, with practice, they soon become loud!

While in the chick phase, rival males will establish dominance over the rest of the chicks.

The boys will bump chests, stare down at each other and play fight.

This usually has the desired outcome of the established hierarchy, so there is no need for any real fighting later on.

If the cockerels are wise, they will watch and imitate the head rooster of the flock.

They will also do well to be submissive to him. Any signs of an uppity cockerel and the rooster will soon put him in his place.

The cockerel will be busy growing his hackles and sickles – his finery to attract the girls and strutting his stuff even though he is unlikely to mate just yet.

What Is A Rooster? 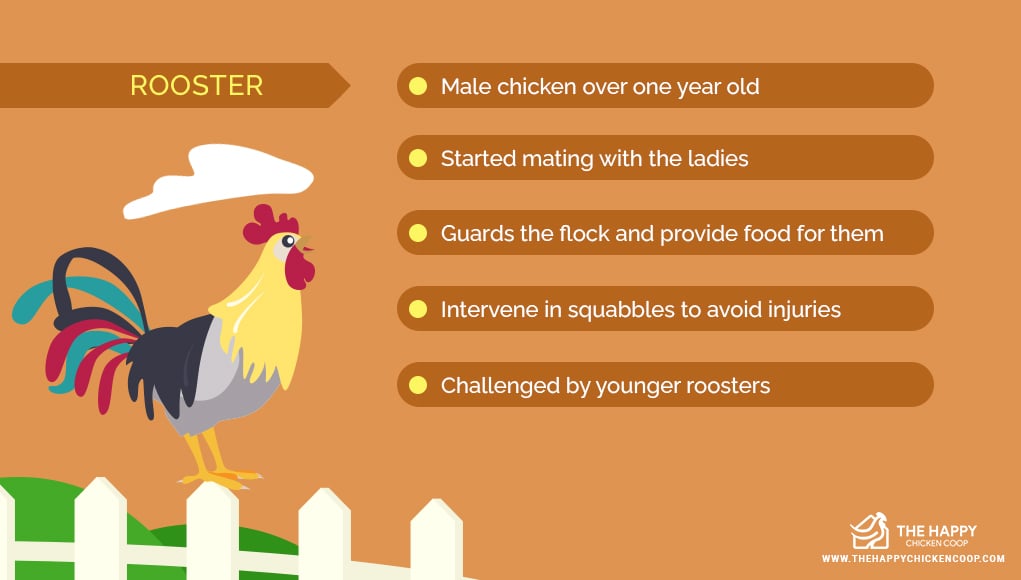 Once a cockerel is over one year old or has started mating with the ladies, he is considered a rooster. However, he must still defer to the older rooster if there is one.

In the wild, groups of young cockerels hang out together until they find a flock of their own, and then they leave the group.

Since this doesn’t happen so much with our boys, we must find homes, cull them or create a group area.

Like a rooster, he is expected to guard his flock, provide food for them, warn them and take care of things for them. He will intervene in squabbles so that no one gets hurt.

He has to be constantly watching for challenges from the younger roosters. If they fight and he is beaten, the new rooster will claim the flock.

The old rooster may hang around on the periphery of the flock or move away altogether.

If he lost the challenge because he was sick, he will usually re-challenge the new rooster and try to reclaim his girls back when he is well again.

What Is A Capon? 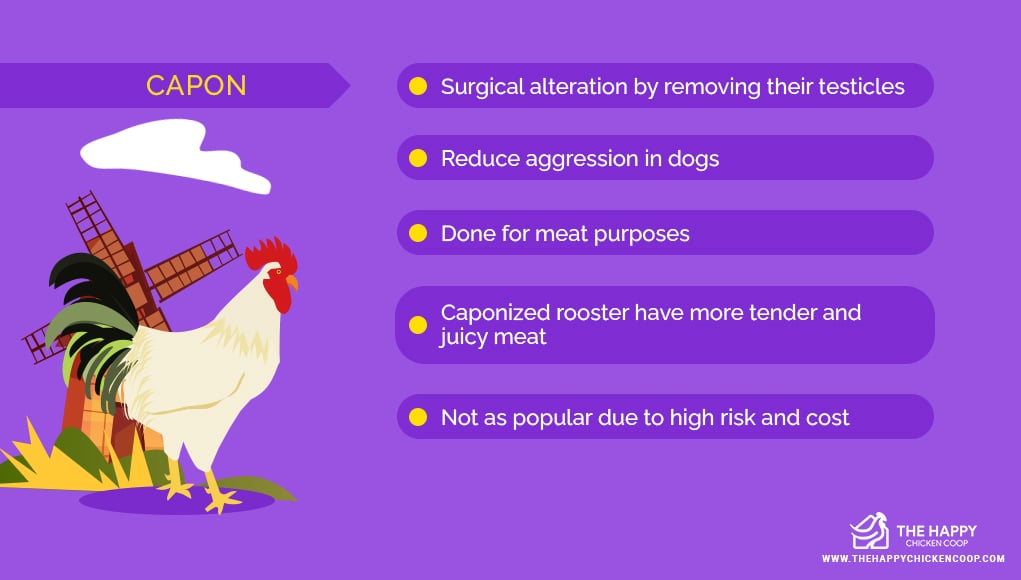 Occasionally, immature roosters are ‘caponized.’ This means they are surgically altered by removing their testicles which are situated internally.

Estrogen implants can also be used to apply the same effect.

This has the effect of reducing aggression in the birds. The head and wattles will be smaller also. This is usually done for meat purposes.

The meat of a caponized rooster is said to be much more tender, juicy, and flavorful.

The practice of caponization is still widely practiced on the Continent, especially in France and Spain, where capon meat is considered a delicacy.

Caponizing had fallen out of favor for many people because it was a high-risk surgery for the bird, not to mention expensive.

While we are on the subject of interesting terms for chickens, here are a few you might hear or use yourself:

POL: This refers to a pullet that is nearing her time to start laying eggs; she is said to be at ‘the point of lay.’

Started Pullets: Pullets can be purchased as ‘started,’ which means they are very close to laying eggs.

Straight Run: When buying chicks, if you buy a straight run, it means you will have a mix of boys and girls.

Chooks: A general term for all chickens regardless of sex or age. More commonly used in Australia and New Zealand.

Broody: A hen that is sitting on eggs with intent to hatch.

So there you have it! Chicken terms and what they mean. You will know to understand a hen Vs. a chicken and what the differences are.

We don’t think twice about using these terms as chicken aficionados, but they can lead to some confusion with non-chicken folks.

Now you can point them to this article and educate them about your birds; who knows. Perhaps they, too, will become chicken folk!

Did we miss any other common chicken words? Let us know in the comments section below…

READ NEXT: How to Sex Chickens: 5 Methods To Determine Hen Or Rooster 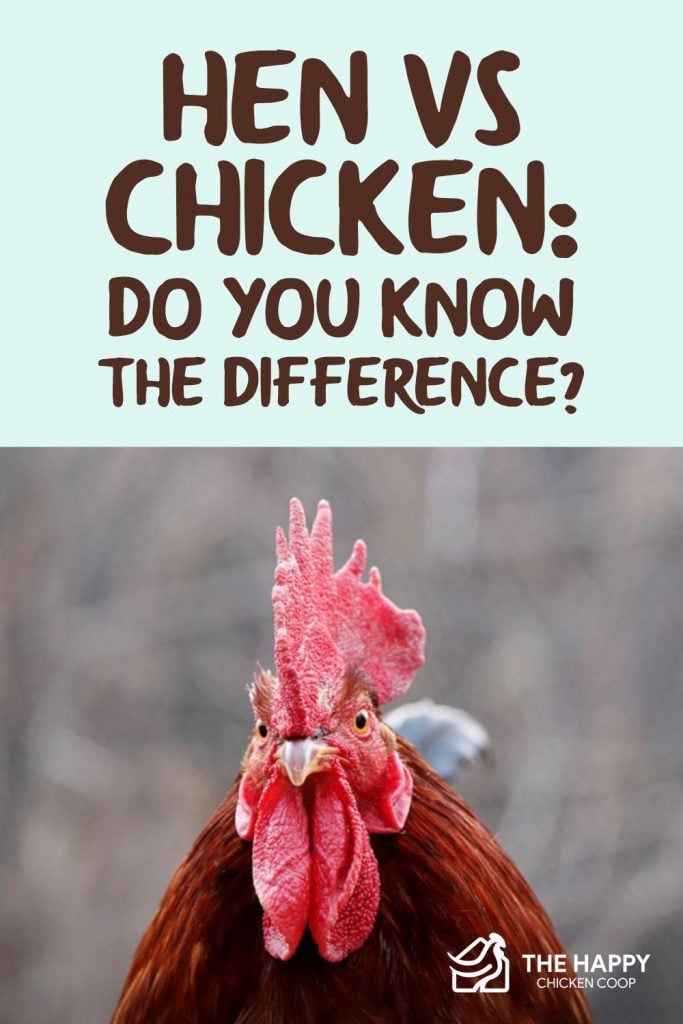 6 thoughts on “Hen Vs Chicken: Do You Know The Difference?”