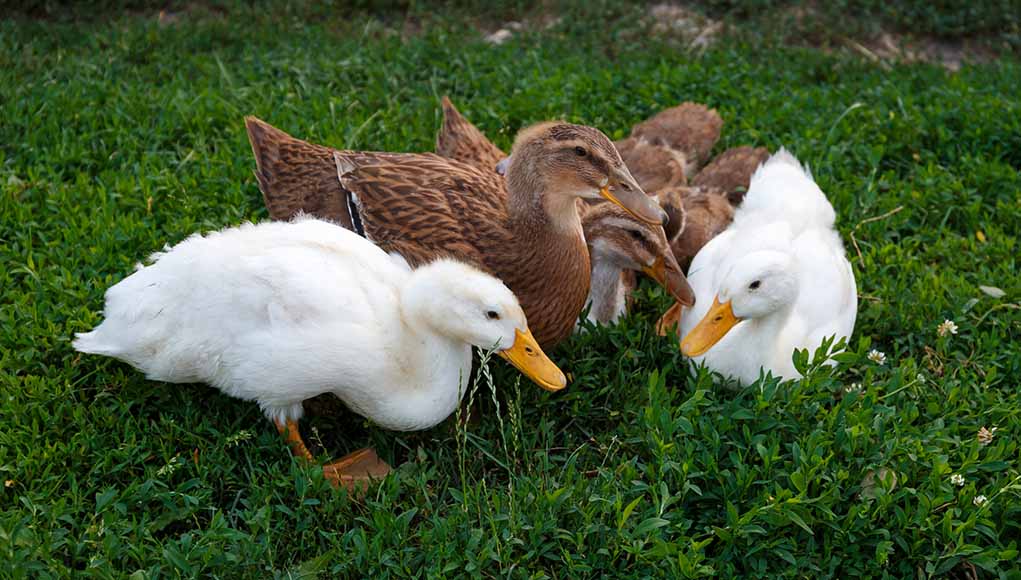 Domesticated duck breeds were all initially created from either wild Mallard ducks or wild Muscovy ducks. Through generations of breeding, we have created particular characteristics.

This myriad of domestic duck breeds has been generated around the world.

We created some domesticated duck breeds specifically for meat production. Others were bred for quantity and quality egg-laying.

And some were crafted as dual or multi-purpose birds equally adept at both egg laying and the production of succulent meat.

While some domesticated duck breeds were heralded for their beneficial secondary traits, they included egg sitting, affable demeanor, quiet nature, and foraging prowess. 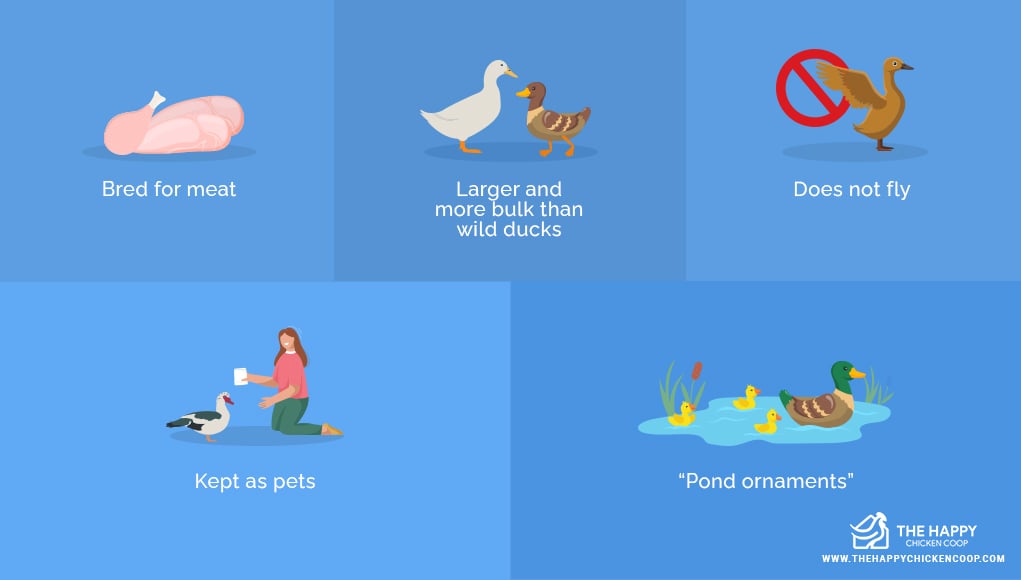 The sheer body size of a duck can quickly alert you to whether or not it is part of a domesticated breed.

Many closely resemble its wild Mallard or Muscovy duck ancestors.

Many domesticated duck breeds that originated from wild Mallards are twice the size (or more) than their ancestors.

Like the Pekin, huge domesticated duck breeds can catch the wind and go a few inches off the ground.

They can propel themselves forward maybe one foot or so before they become earthbound once again.

On the flip side, by accident, some domestication breeding from wild ducks went in the opposite direction.

The Call duck breed is one example. These wild ducks were being bred to create a small or “pygmy” duck breed.

They were once heavily used as decoys by hunters to “call” or attract wild ducks.

Call ducks are also often kept as pets or historically as “pond ornaments”.

Because of their small size and beautiful plumage – and trait, some domesticated duck breeds have been bred and cross-bred to create.

The oddly shaped Indian Runner duck breed boasts an incredibly long and lean body. They look a lot more like a bowling pin than a duck and waddle.

This domesticated duck breeds run like penguins instead of ducks.

Yet, they are definitely ducks. Indian Runner ducks are known for their longevity, hardiness, and ability to walk extremely long distances to get to market. 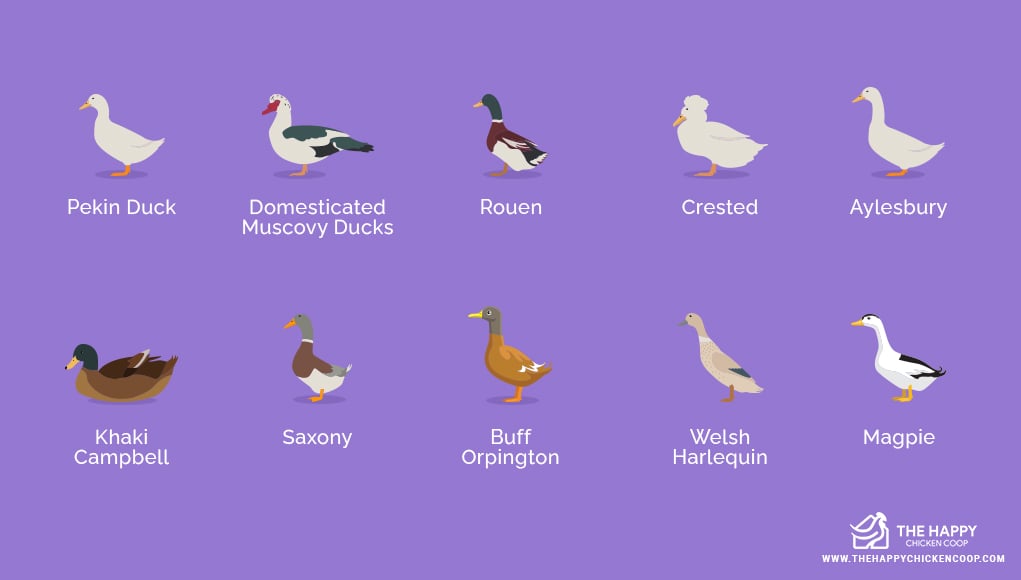 These are the top commercial meat production domestic duck breed globally – and my personal favorite duck to keep.

They are excellent foragers who can hunt for up to half of their daily food ration from spring through late fall.

While they are lousy sitters, Pekin duck hens are excellent momma ducks with their ducklings after you hatch their offspring and turn them loose from the brooder.

Once mature, Pekin ducks weigh roughly eight to 11 pounds, on average. A healthy mature hen is capable of laying approximately 200 to 300 eggs per year.

The large white eggs laid by Pekin ducks weigh around three ounces. The average lifespan of a Pekin duck is about 10 years. 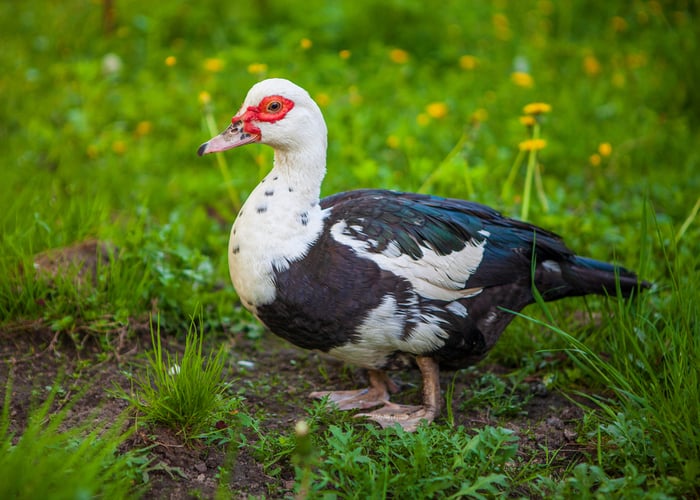 The domesticated version of this wild duck breed is a lean meat duck that still produces robustly flavored meat.

Muscovy ducks are also a bit of an oddity. They prefer to roost in the evening like chickens instead of curling up together with their flock mates at ground level.

Male Muscovy ducks cannot quack but instead have a call that is often deemed a “low and breathy” sound.

Hens of this domesticated breed lay around 120 creams to white medium to large eggs annually.

When kept in a clean and healthy environment, ducks of this domesticated breed typically live between eight to 12 years. 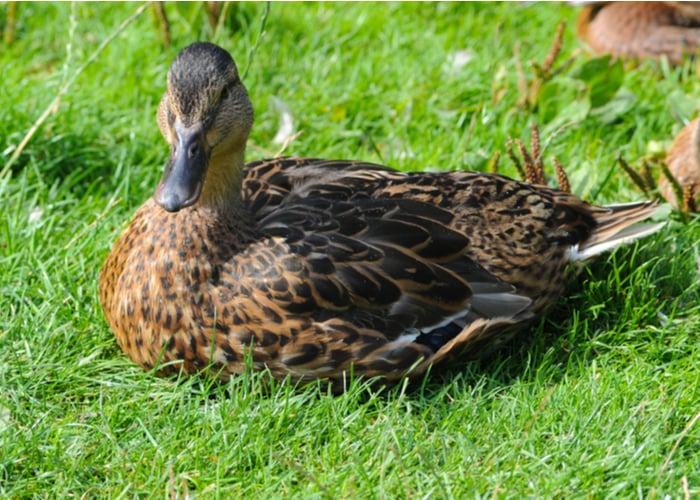 Members of this domesticated duck breed are typically referred to as multi-purpose ducks.

You should be able to expect to collect up to five pretty white to blue-tinted eggs a week – except during the winter months when all poultry bird laying slows down.

Rouen ducks have beautiful plumage and are calm ducks, and are known to be a fairly quiet breed.

On average, this domesticated duck breed members live eight to 12 years when properly housed and cared for in captivity. 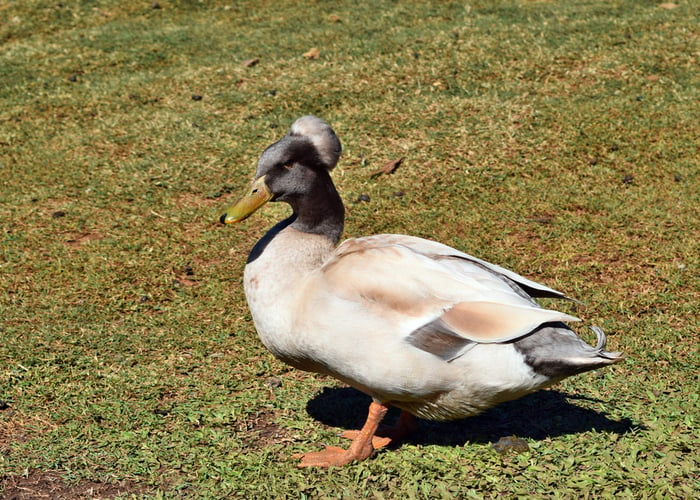 You will discover that domesticated duck breeds typically grow slower than some breeds and are largely kept for egg-laying purposes.

We found that the mature Crested duck hens commonly lay between 100 to 130 large white eggs annually.

It’s expected that a producing hen can lay between two to four eggs per week. You will see this during her prime egg-laying years.

Once mature, Crested ducks will typically weigh between six to a little more than seven pounds, on average.

Crested ducks are not raised for meat birds and do not have a lot of size to them. The meat that members of this domesticated duck breed produce do create a nice tasting and moist meat.

The only downside in keeping these smart and docile ducks is breeding them to further the longevity of the flock.

A Crested duck that is bred to another of its own kind generally never produces life offspring.

Only half of the fertilized eggs when a crested and non-crested duck are mated are expected to hatch, and of those that do, only roughly one-fourth of them will turn out crested. 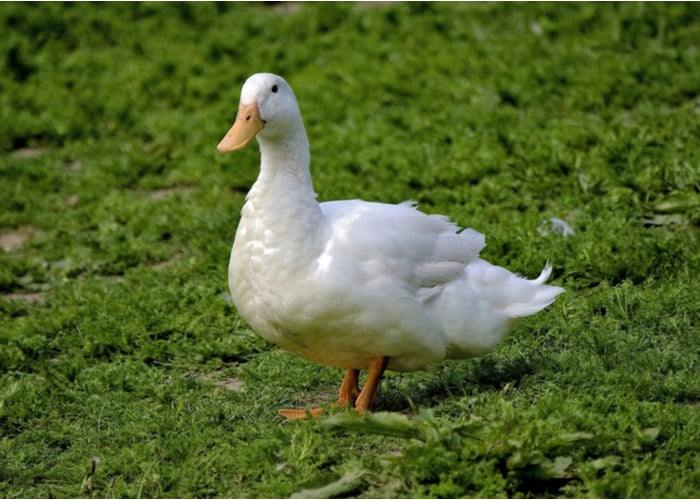 This consummate domesticated meat duck breed is prevalent in England both commercially and with residential backyard keepers.

The meat generated by the Aylesbury duck is incredibly moist, tender, and is pure white in color.

Finding Aylesbury ducks in the United States can be problematic but well worth the effort if you want a hardy, docile, and affable domesticated meat duck.

They are a rapid-growing duck and can hit mature butcher weight (five pounds) in as little as seven to nine weeks. Once fully mature, an Aylesbury duck tends to weigh in at roughly 10 pounds.

Hens lay between as few as 40 up to 120 medium to large white to light green eggs annually. The average lifespan of Aylesbury ducks is between eight to 10 years. 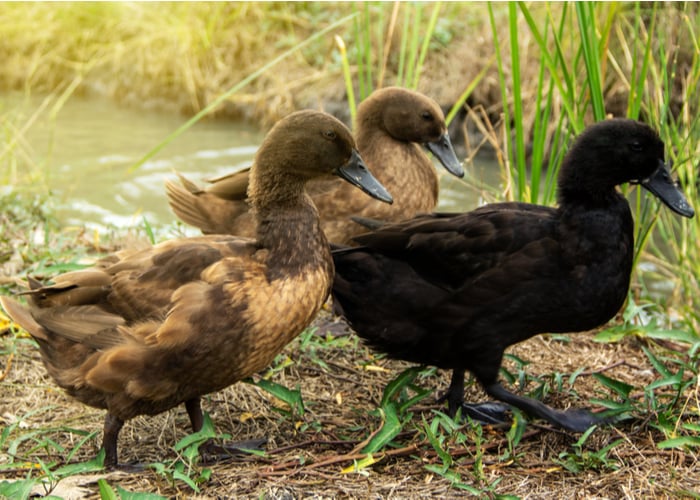 Members of this domesticated duck breed are exceptional layers and are prone to being good sitters, as well.

Khaki Campbell ducks are not often raised as meat and egg poultry birds because of their size. They are primarily kept as egg layers in the United States.

Khaki Campbell ducks weigh only around four to five pounds once they mature.

A mature Khaki Campbell hen usually lays between 170 to 230 extra-large white eggs per year. A female of this domesticated duck breed typically will begin laying eggs when she is only five to seven months old.

Khaki Campbell ducks are affable but often a bit leery of their human keepers initially until a trust bond is formed.

They are easy to train to free-range and go back up into their coop/duck house at night after foraging voraciously all day long. 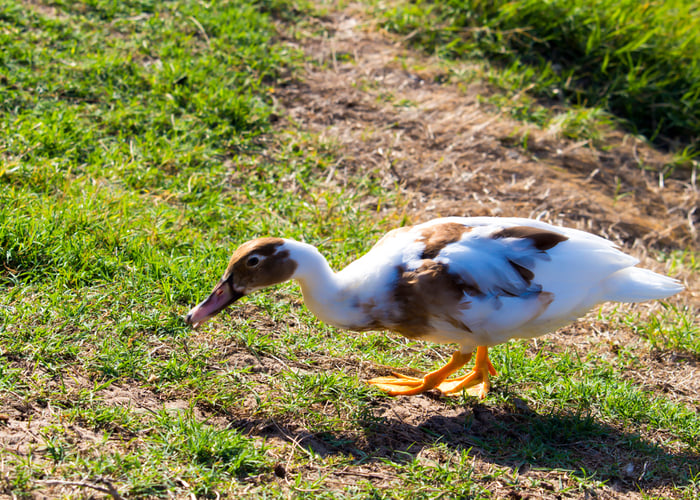 This domesticated duck breed is a large meat duck type of poultry bird like the Pekin. They grow rapidly – and lay an above-average amount of white to light blue eggs in the process.

Saxony ducks are also highly regarded for being calm, affable to even affectionate with their keepers, as well as being naturally curious.

Mature ducks of this domesticated breed usually weigh between eight to nine pounds. Saxony duck hens lay between 80  to roughly 100 eggs per year.

The average lifespan of members of this duck breed is between eight to 12 years. 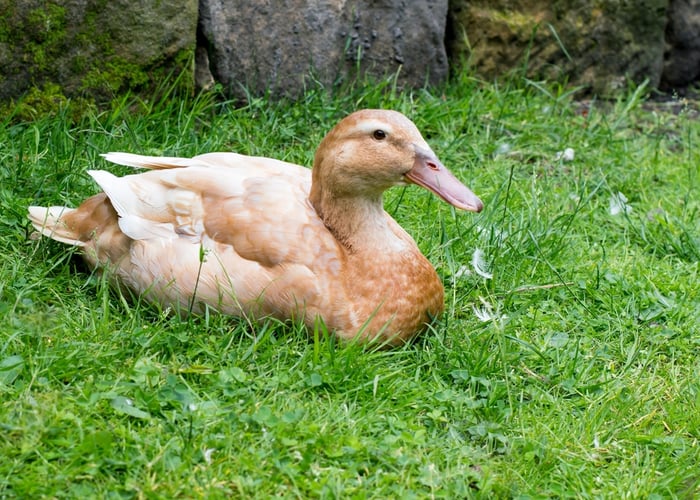 This is an excellent egg-laying domesticated duck breed. Keepers can expect to collect between three to five light brown large eggs per week from mature hens – totaling roughly 220 eggs per year.

Artisans and craters also covet the beautiful buff feathers. Mature ducks of this domesticated breed weigh between eight to 10 pounds on average, making them a potential multi-purpose poultry bird. 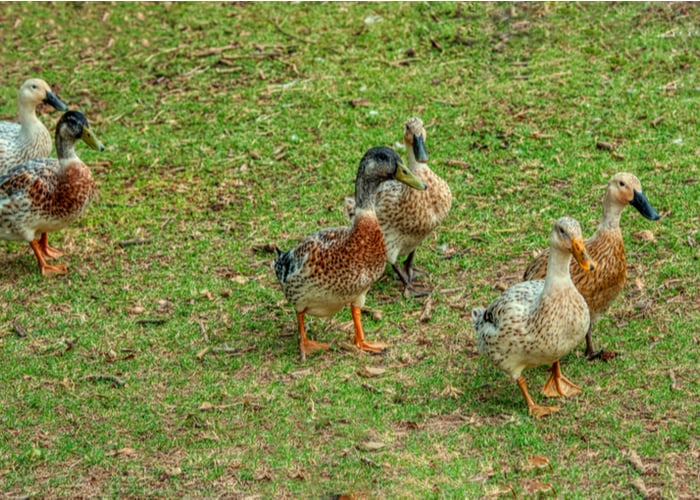 Members of this domesticated duck breed are excellent egg layers and typically offer keepers between 210 to up to 340 large white eggs annually.

Welsh harlequin ducks are medium-weight (about four to five pounds), making them not highly sought after as a meat breed.

However, due to their environmental hardiness and longevity, some backyard keepers – especially those on small (5 to 10 acres) acreage homesteads to have a steady source of both meat and eggs.

While these domesticated duck breeds do not produce a lot of meat, it is robustly flavored.

Welsh Harlequin ducks generally live for a decade when kept in a healthy environment and cared for property. 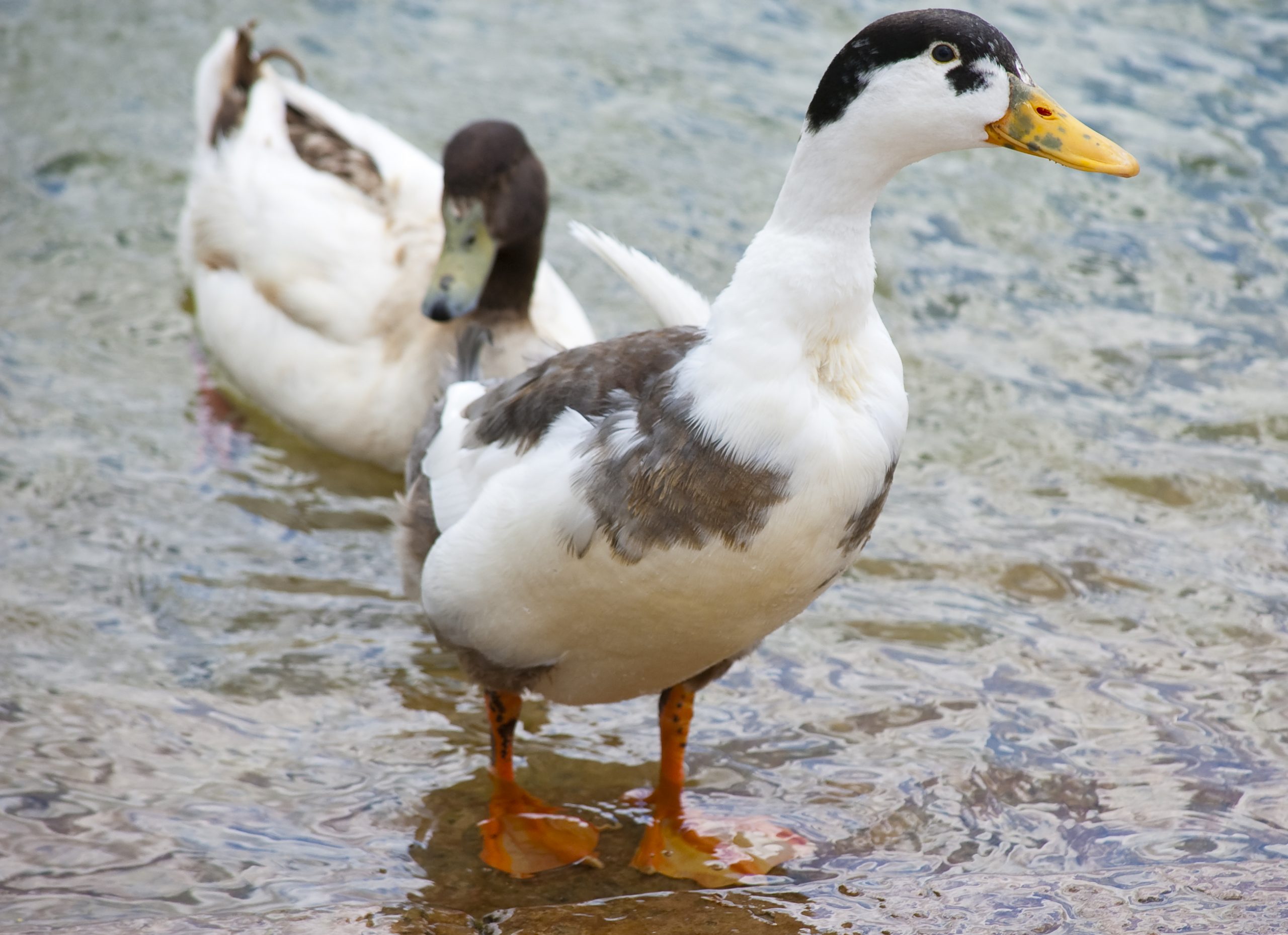 Ducks of this domesticated breed live nine to 12 years, on average. Magpie duck hens lay up to five colorful eggs weekly in shades of white, cream, light blue, and green.

A mature Magpie duck hen is capable of laying between 210 to 290 eggs annually, on average.

Magpie ducks are a light-class bird and rarely ever raised for their meat – although it tastes moist and tender. They weigh only three to five pounds once they mature.

They are a beautiful and affable duck breed that can live contentedly in either a duck house and run environment or a free-range friendly backyard or homestead.

Domesticated duck breeds can provide eggs or meat for your family. They also make great “farm pets” to adorn ponds, both small and large.

Keeping ducks is possible even if you have just a small backyard.

Ducks are happy and healthy with only a small garden pond or even a baby pool. Just remember to keep the water clean. 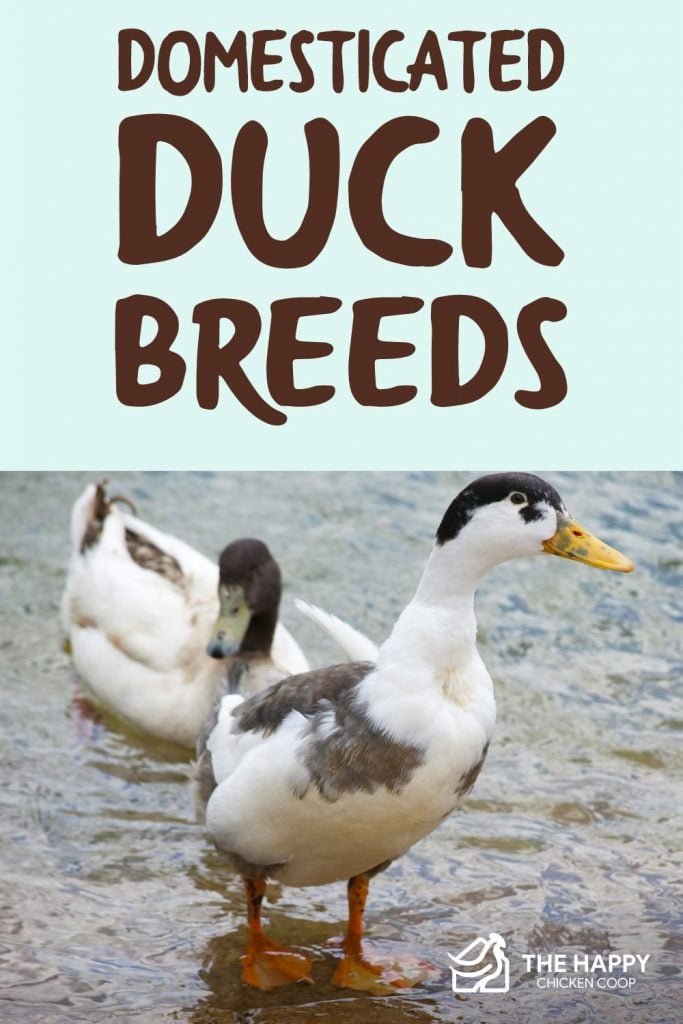