Pekin Duck Breed: Everything You Need To Know 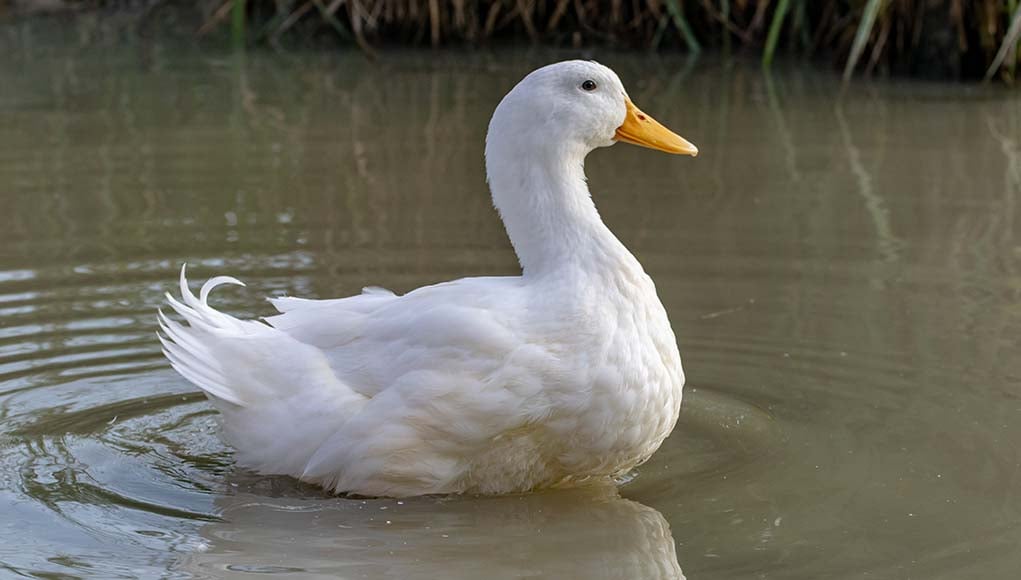 The Pekin duck is among the most popular breeds kept in the United States, both in backyards and on homesteads across the country.

Pekin ducks are a multi-purpose breed, meaning they have traditionally been raised for egg and meat production.

The docile and sometimes affectionate nature of Pekin ducks has also earned them intense popularity to keep simply as a farm pet along with chickens.

Both the Donald Duck character and the duck shown in AFLAC commercials are of this same breed.

I have kept multiple different ducks varieties over the years, but Pekins have always remained my favorite.

They are hardy, consistent quality egg layers even during the winter months and possess consummate barnyard free-ranging smarts.

While I do not raise ducks for meat, Pekin ducks do produce a moist and tender variety.

The Pekin duck breed has been domesticated for more than 2,000 years.

While the exact origin of the breed still often sparks dispute among historians, Pekin ducks were most likely developed in Southeast Asia.

The breed may have been created in China and then exported to England around 1872.

Pekin ducks arrived in America a few years later and rapidly became the most sought-after duck breed on the market.

Keepers bred the Pekin duck in only one variety – white. Their ducklings are yellow and are the ones you see in advertisements and storybooks.

As the Pekin ducks age, the yellow fuzz gives way to creamy white feathers – the orange shanks (legs) remain the same color throughout their lives.

The bill on a Pekin duck is also a deep shade of yellow. Some Pekin ducks (especially females in my personal experience) develop some dark spotting near the bill’s tip after reaching full maturity.

The body shape of a Pekin duck is long, fairly wide, and full-breasted – the primary reason this breed is favored for meat production. 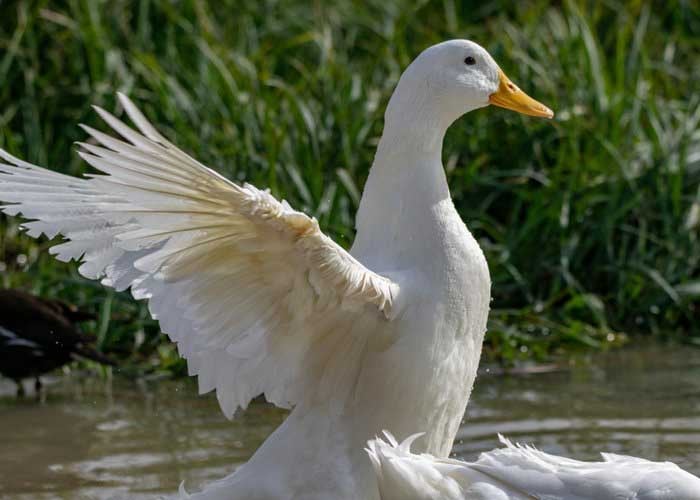 As noted, Pekin ducks, both hens, and drakes are known to be friendly and non-aggressive poultry birds. They sometimes accept being petted by those who are raising them as either a pet or egg bird.

Handling the ducklings frequently from the time they are hatched will help get the birds accustomed to being held and touched if this is an important consideration for you.

Stroking their bellies gently while they lay upside down in your lap seems to be a favorite Pekins activity that likes being touched.

Not only can they forage for the bulk of their diet naturally in most environments, but they also remain keenly aware of threats and rush back to the safety of their coop and run when necessary.

Pekin hens can be a bit loud, especially if they have been spoiled. I train my duck and chicken flocks to meet me at the coop run door and put themselves up at night by giving them a little treat.

If I am a moment, late the hens will start honking loudly or even show up at my back door to hurry me up.

They help the ducklings learn the barnyard routine and how to forage for their own food – often pushing tentative little fuzzy ducklings into the water if they dawdle too long on the pond bank. 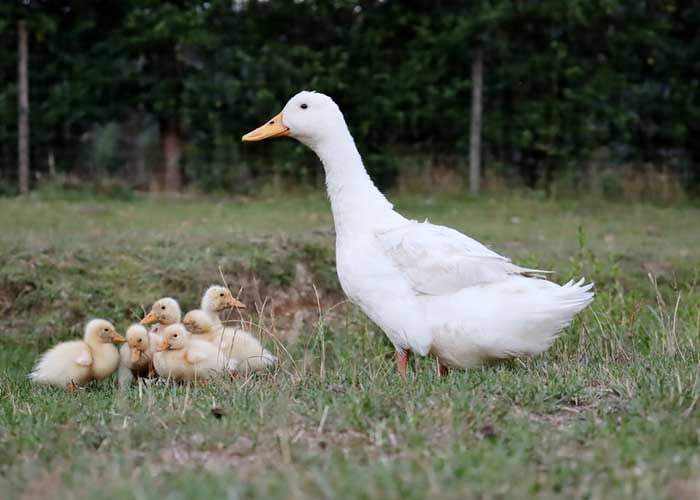 Both domesticated and wild ducks eat a nearly identical diet – if the flock is permitted to free-range.

A poultry bird or chicken feed is often given to Pekin ducks.

A game bird feed will provide more protein in their diet and should be used occasionally if the flock members are not also free-ranging.

Ducklings can eat chick starter feed as long as it is not medicated.

Typically, pellet foot or crumble suits a duck best. Scratch is more difficult to eat because of their rounded bills – scratch is best reserved for the pointy beaks of chickens, turkeys, and guineas.

A “layer” feed is also an excellent choice. The percentages of calcium and other vital nutrients in the mix help create better quality eggs and more durable shells.

When free-ranging, a Pekin duck will be on patrol for tadpoles and small frogs, small fish and crustaceans, algae, berries, worms, nuts, crickets, flies, and especially, mosquitoes.

Garden greens are also a favorite of the Pekin duck – mine go nuts for lettuce and grapes as a healthy training treat.

Switching to a protein-rich feed and offering corn as a healthy snack should be part of the fall husbandry routine.

Both types of feed help the ducks put on an extra layer of fat to keep them warm during the long cold months of winter.

Unlike chicken and other poultry birds, Ducks will still spend the bulk of their time outdoors even when there is snow on the ground. 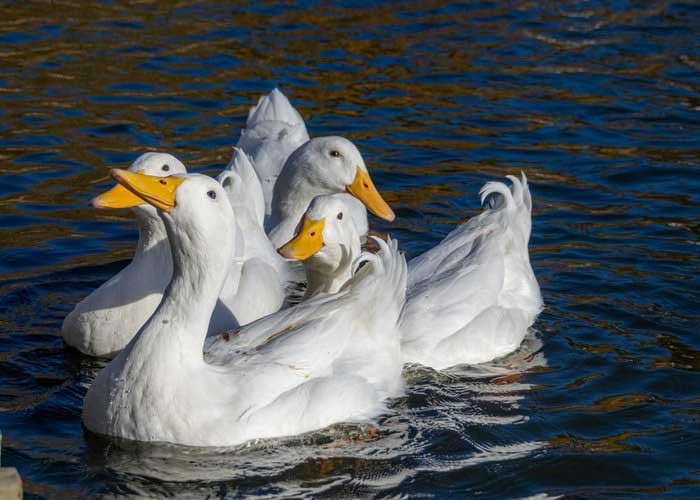 The ducks will need a warm and safe hut or coop to get into at night to sleep and to retreat to during stormy weather. Ducks love to be in the rain, but thunderstorms and ice storms are not to their liking.

Clean and dry bedding should be provided throughout the year.

A duck run will become muddy more quickly than a chicken run because the ducks will not only splash their drinking water while slurping but also because when they get in and out of their plastic baby pool or small in-run pond.

During rainy times of the year, I spread straw around the run to help dry up all the mud generated both by the weather and the ducks themselves.

Ducks should never go more than eight hours without access to water. Ducklings, however, should not be allowed into the water until they are at least one month old.

Until they hit this age, the ducklings do not possess the natural oils which cause their fuzz – feathers to dry quickly and prevent chilling.

While the Pekin ducks will swim less in their run water source or a pond while free-ranging during the winter months.

They will still swim sometimes and need to have an unfrozen water source deep enough to dip their head’s necks into water daily to remain healthy. 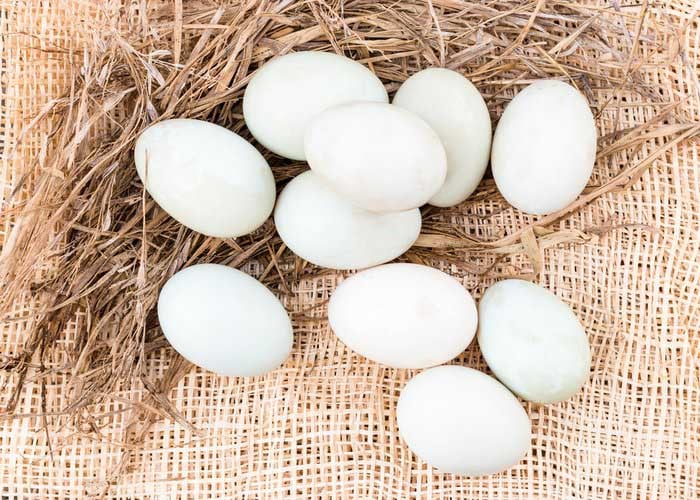 On average, Pekin ducks lay between 200 to 300 extra-large white eggs annually. A Pekin hen typically starts laying eggs when she is five to six months old.

If the duck hits this age during the cold weather months, you will likely need to place a solar coop light inside the living quarters to ensure she garners the minimum of eight to 10 hours of light daily necessary for poultry birds to lay eggs.

Depending on the outside temperature and whether a Pekin hen attempts to sit her eggs sporadically, an egg found in the coop or run could still be viable for incubating up to 10 days after the egg is laid out laid it.

Even if a Pekin hen shows a lackluster desire to sit eggs, she may still be quite prone to rolling them into a nest – and she won’t be selective about what eggs she chooses.

A dominant hen will steal the eggs of other hens and roll them or bill to lift them a surprising distance – even pushing them up a ramp if the duck house has a second level.

Unlike chicken hens that lay on a 26-hour individualized schedule, duck hens almost without fail to lay their eggs between duck and dawn.

This egg-laying routine makes duck eggs a lot easier to find before they get trampled and broken – especially since ducks tend to drop eggs wherever they are when the feeling strikes and not in nest-like chicken hens.

Although a Pekin hen will rarely lay eggs in a nest, she will make one and roll her eggs into it.

Why? I have absolutely no clue why Pekin hens plop eggs down everywhere and then roll or carry them to a nest they made and could have comfortably laid them in the first place – but trust me, this is a widespread habit.

If you are like me and cannot fathom butchering these adorable and affable ducks, the quality of their meat production may not interest you at all.

If you want to raise one of the best multi-purpose meat and egg duck breeds in existence, these facts should be of keen interest.

Pekin duck meat is a rich source of protein. The primarily dark meat produced has a delicious flavor.

Yes, I have eaten Pekin ducks raised by other homesteaders and in restaurants, and does not have a greasy taste or texture as can be common with duck meat.

When a Pekin duck reaches the age of just six weeks old, it will weigh roughly six pounds and is ready for butchering.

On average, Jumbo Pekin ducks should weigh approximately nine to 11 pounds once they reach the 12-week old milestone.

The rapid weight gain associated with Pekin ducks is one of the many reasons why they are often exclusively raised for their meat.

The more quickly a duck (or any livestock) matures to full butcher weight, the less expensive it is to feed.

Regardless of why you choose to keep Pekin ducks, I am willing to bet they will live up to their reputation as hardy, intelligent, and friendly poultry birds.

The influx of duck eggs into your cooking and baking might create some creamy and blue ribbon dishes that will amaze your friends and family. 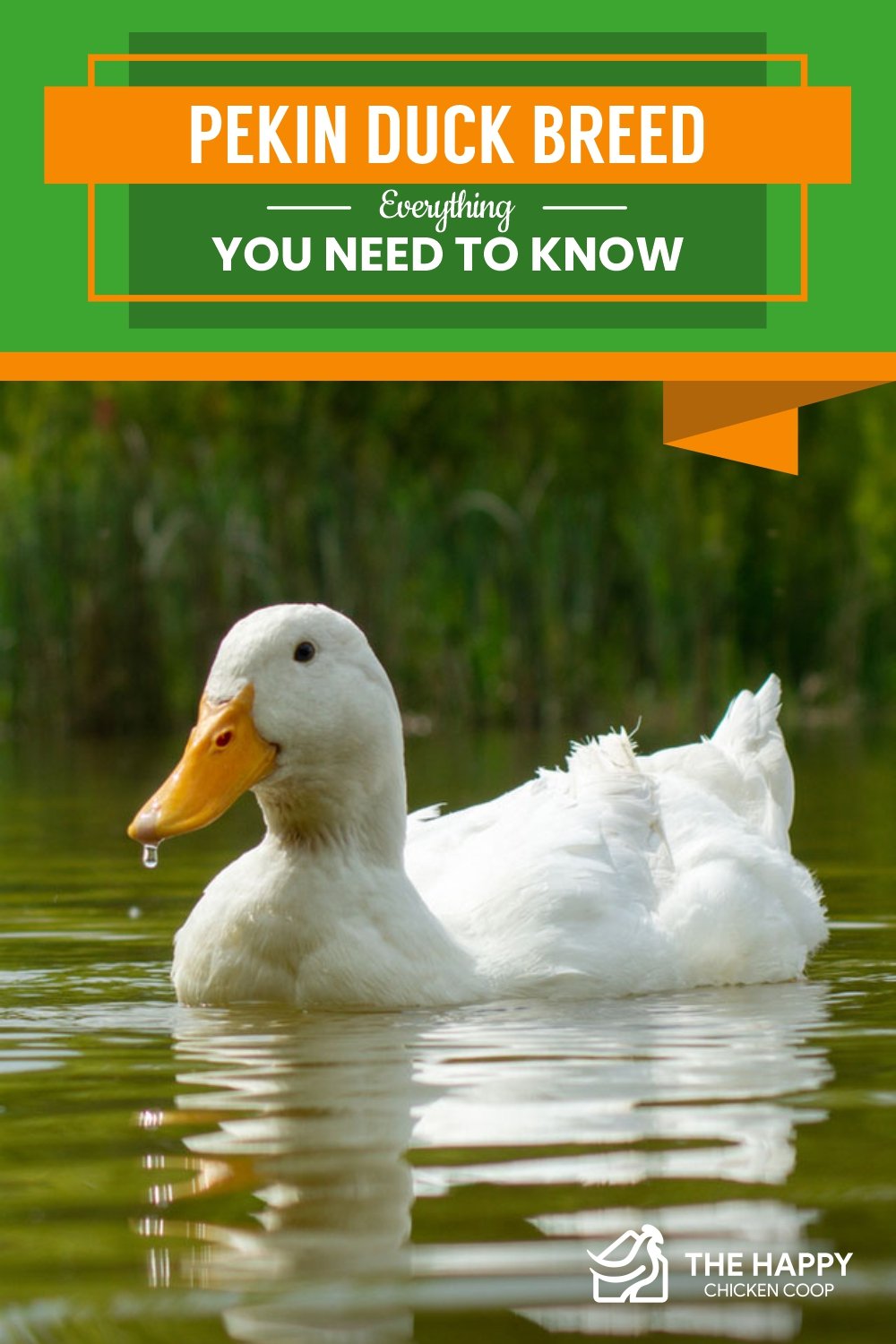 7 thoughts on “Pekin Duck Breed: Everything You Need To Know”