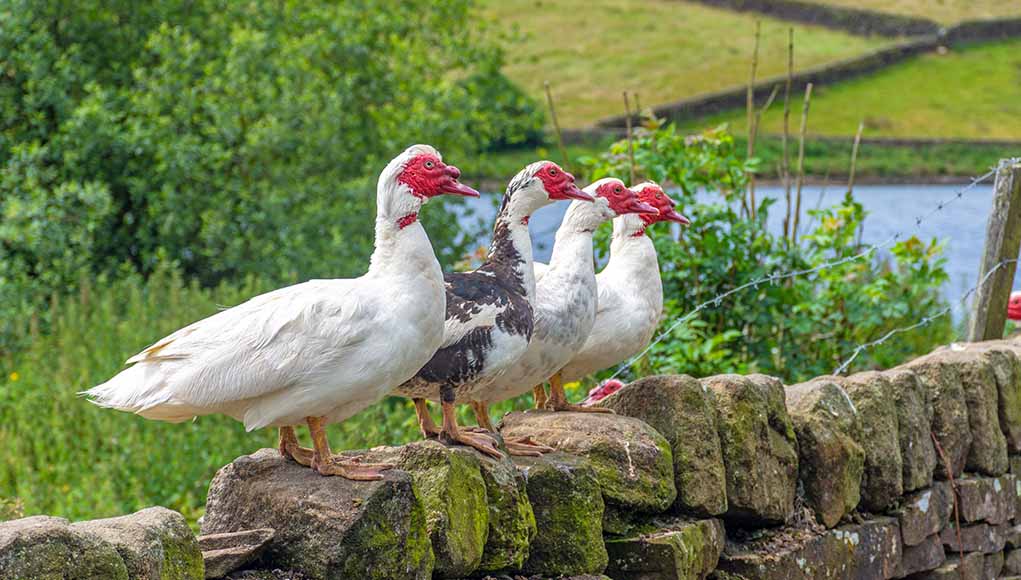 The Muscovy duck is an unmistakable sight with its bright red caruncles.

This unusual-looking duck has been kept for hundreds of years and is a staple for many indigenous peoples of South America, adding eggs and meat to their diet.

Although originally a tropical bird, it has adapted well to various climates and can thrive in temperatures down to 10°F.

It has become common across much of the US and New Zealand, Australia, UK, and Europe, where small feral colonies exist.

This article will explain how to keep Muscovy ducks, egg-laying, fun facts, and more… 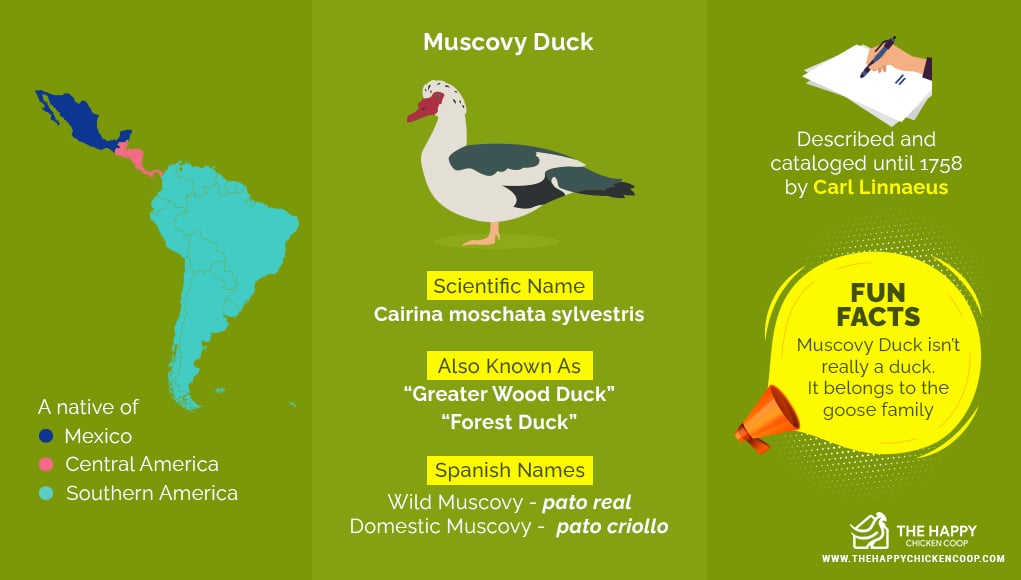 The wild Muscovy duck (Cairina moschata sylvestris) is actually a native of Mexico, Central America, and Southern America. It is also called a Greater Wood Duck or Forest Duck.

Before the arrival of Columbus, a domesticated variety of Muscovy was bred and farmed by the area’s indigenous people.

When the Spanish discovered the duck, they named the wild Muscovy pato real and the domestic Muscovy pato criollo.

The Muscovy duck was mentioned in Ulisse Aldrovandi but was not scientifically described and cataloged until 1758 by Carl Linnaeus.

Although the Muscovy is called a duck, it isn’t really a duck. They are close to ducks but not really family members.

The Muscovy is the only duck that is not bred from Mallard stock. If you were to breed a Muscovy with a Pekin, the offspring would be a sterile Mulard. In fact, some people do and use the Mulard as meat birds. However, there are more popular duck breeds used for meat.

It is probably as near to the goose family as ducks; it certainly grazes like a goose. 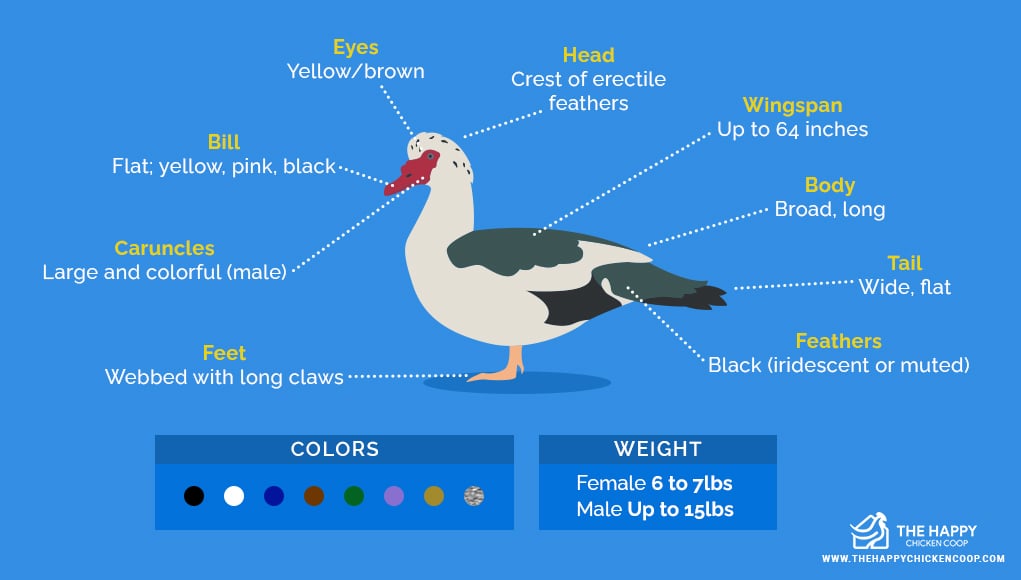 The Muscovy is a large duck and can have a wingspan of up to 64 inches. It is also a heavy breed and can weigh up to 15lbs, although the girls are slightly lighter at 6-7lbs.

As the males are so heavy, they can struggle to fly, but the females can fly, and you will need to clip their wings to prevent them from escaping.

It has a broad, long body (males around 30 inches) and a wide, flat tail. Colors are usually black and white, but there can be many variations: blue, black, chocolate, pied (white with any color), green, white, lavender, bronze, barred, and rippled.

The black feathers of the male are iridescent in sunlight, but the female coloration is more muted and drab to provide camouflage when nest sitting.

The head is unique. The facial ‘mask’ will be a dark red/blackish color – the caruncles will grow slowly, and the boys will develop them before the girls.

The caruncles are larger and more colorful on the male. The mature male will have a large dark red/blackish knob at the base of his bill.

There is a crest of erectile feathers on the top of the head, which the bird will raise if excited or nervous – the crest is larger in the males. The males will raise the crest in courtship to attract a mate.

Eyes are a yellow/brown color. The eyes have a nictitating membrane that allows them to see underwater. The bill is flat and can be yellow, pink, black, or any combination. It can also have pink ‘spots’ on it.

The webbed feet are unusual in that they have long claws.

These claws allow them to perch up in trees – hence the name “greater wood duck.” The feet and legs are black in color.

What Makes the Ideal Muscovy Duck Habitat and Diet?

Muscovies love a habitat of dense vegetation, large old trees, and water, of course! Wetlands, riparian areas, or even the local golf course pond will attract them as long as there is some dense vegetation to hide in.

Although they swim, they don’t swim as much as other ducks because their oil-producing glands are small and underdeveloped.

They are omnivorous foragers, eating various plant materials, leaves, roots, and shoots, along with small fish, crustaceans, small reptiles, and millipedes. They will eat mosquitoes and flies avidly and have been used as ‘pest control’ by some people.

In fact, a Canadian study of fly control methods found that Muscovy’s ate about 30 times the amount of the various fly traps, papers, and other methods tested!

Feed wise; if you are raising them from ducklings, they should be given a 28% gamebird starter which should be freely available.

As they transition to adults, they can be cut back to 20% layer pellets.

They also enjoy mealworms and cracked corn as treats, along with fresh greens and scratches, among other things. You can learn more here. 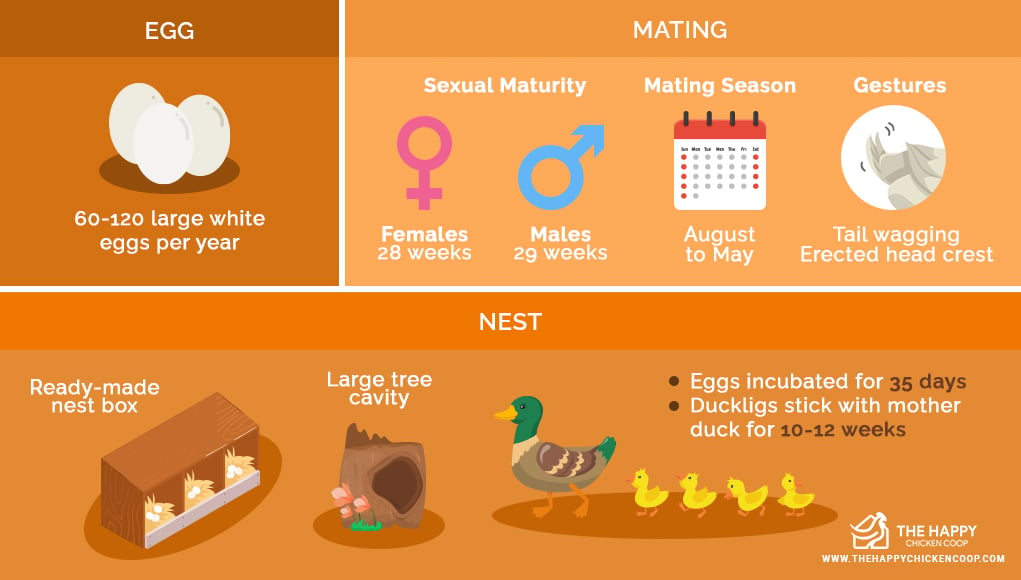 The Muscovy lays 60-120 large white eggs per year (a low number for ducks).

Males reach sexual maturity in 29 weeks, and the female matures in 28 weeks. The mating season of the Muscovy can last from August to May. This can vary by climate, and the females can have three to four broods per year as long as she has sufficient protein in her diet.

There really isn’t any courtship ritual except for lots of tail wagging and erecting the head crest. Males have been known to fight each other for mating opportunities with the females.

They are polygamous, although a male may help with guarding the nest and ducklings.

The female will set her nest in a large cavity in a tree or a suitably secure ready-made nest box off the ground or an elevated duck house; they do not like ground sitting duck houses.

Some folks keep them in with their chickens since Muscovies are not as mucky as a regular duck, and the arrangement seems to work well enough.

Her clutch of eggs can be up to 16 or so eggs. She will then carefully incubate her eggs for 35 days until they hatch. Often a few females will brood together.

The ducklings will stay close by Mama for 10-12 weeks to keep warm and safe. During this time, they will be learning all the skills needed to survive. At 12 weeks, the ducklings will be good-sized birds, although not yet adults.

Why Do People Keep Muscovies?

The Muscovy has been raised for eggs and meat for a few hundred years now.

It has the highest meat yield of any duck. The meat is 98% fat-free, is much less greasy than other ducks, and there is approximately 50% more breast meat than a standard duck. It also has fewer calories and fat than a turkey pound for pound.

The meat is said to have a strong flavor, but this will vary on your duck’s diet and nutritional content. The taste of the meat has been likened to roast beef, veal, or ham.

The eggs are white and large and loved by pastry chefs the world over. Duck eggs contain more albumin than chicken eggs, and that makes for fluffier pastries. 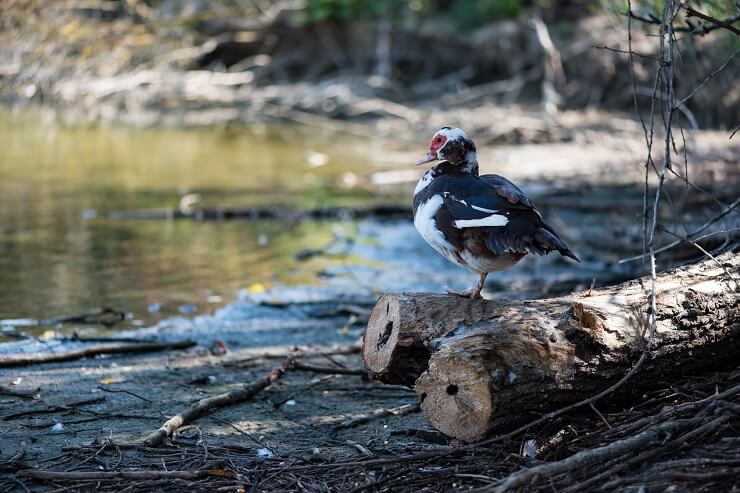 The Muscovy is a very quiet duck; they do not quack like other ducks. They are usually fairly quiet unless attacked or excited.

If upset, happy, or excited, they wag their tails a great deal, and the males can also puff and hiss.

They are fairly long-lived with an average lifespan of 8-12 years, but Muscovies can live for up to 20 years in captivity.

Healthwise, they are very hardy. Birds with large or excessive caruncles may be prone to frostbite in colder areas, so be aware and keep an eye open for any problems.

Is the Muscovy Duck Suitable For You?

It is also a slow grower and takes time to fill out to its’ full potential.

Along with slow growth comes the feed cost, although they can usually find a lot of their own food from the wild.

The Muscovy is a friendly duck with a distinct personality. They don’t like to be picked up and petted, but they still enjoy some human company (also good with children).

They are non-aggressive, except for the mating and rearing season when they can become protective and territorial mates and offspring.

Whilst not really suitable for small backyards, a ¼ acre or more is preferable.

FAQs on The Muscovy Duck Breed

How to get rid of muscovy ducks?

Some people love this breed and want them to be part of their flock.

If you prefer not to have them on your property, you can remove them by baiting them (if they are used to being fed) and capture them by casting a net.

If the ducks are more skiddish, you can set up a funnel trap and put some corn in them. You can then call FWC and they will remove and relocate them.

Will Muscovy ducks fly away?

Yes, Muscovy ducks can fly and escape from homesteaders’ properties.

To keep this from happening either clip their wings or make sure their basic needs are being met: shelter, drinking water, and water for them to swim (ducks cannot live without access to water).

You can train them to come up to you and even let you pet them with food as a reward!

Muscovies are quiet, peaceful ducks with personalities. They ‘talk’ with their tail, wagging it furiously when animated or happy, much like a dog does.

They tolerate winter weather quite well as long as there is suitable shelter and rarely migrate unless the weather is severe.

Muscovy ducks are a personable bird that loves to hunt flies and mosquitoes among other things. I may get some for that skill alone!

Do you keep Muscovy ducks? Please tell us all about them in the comments section below… 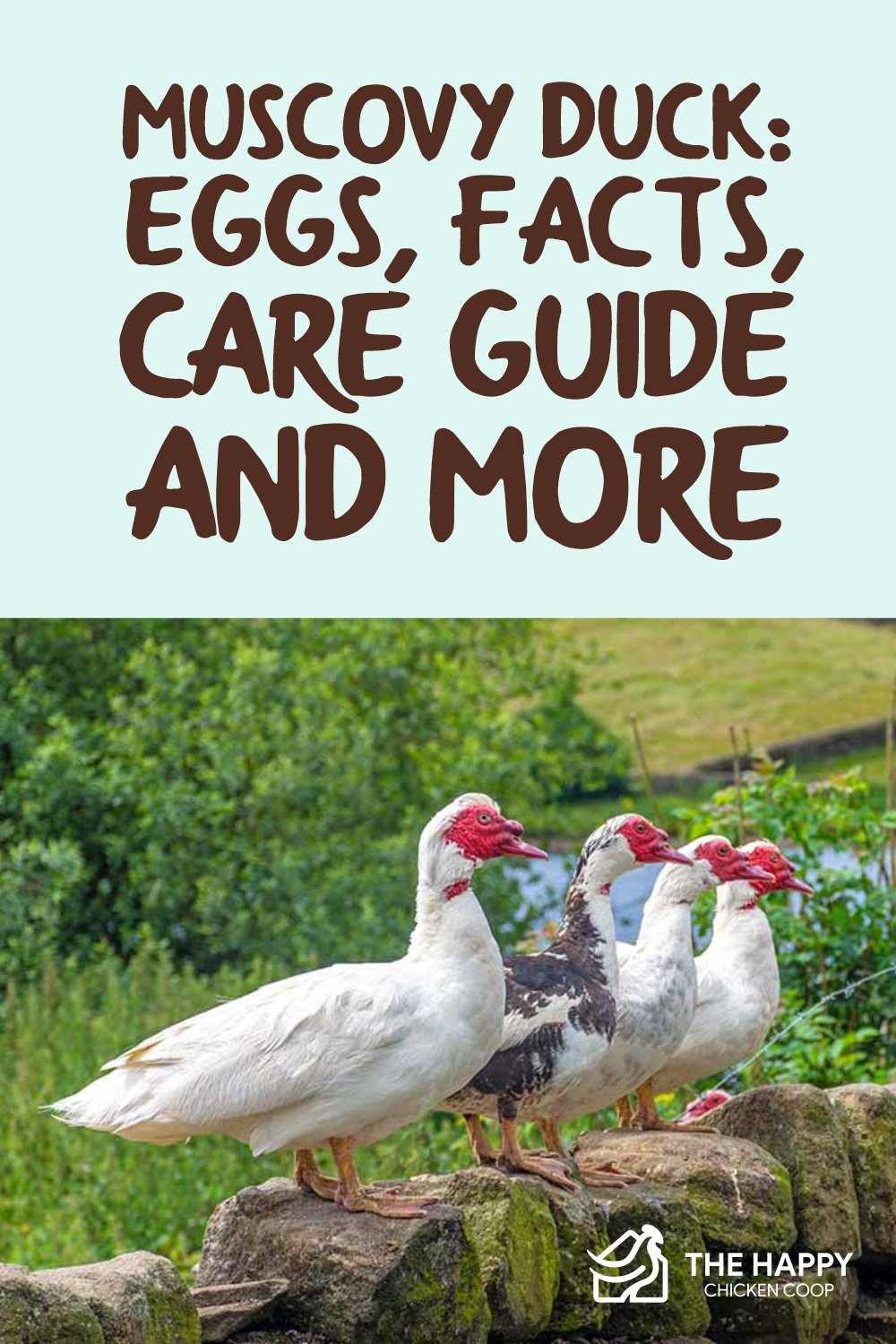