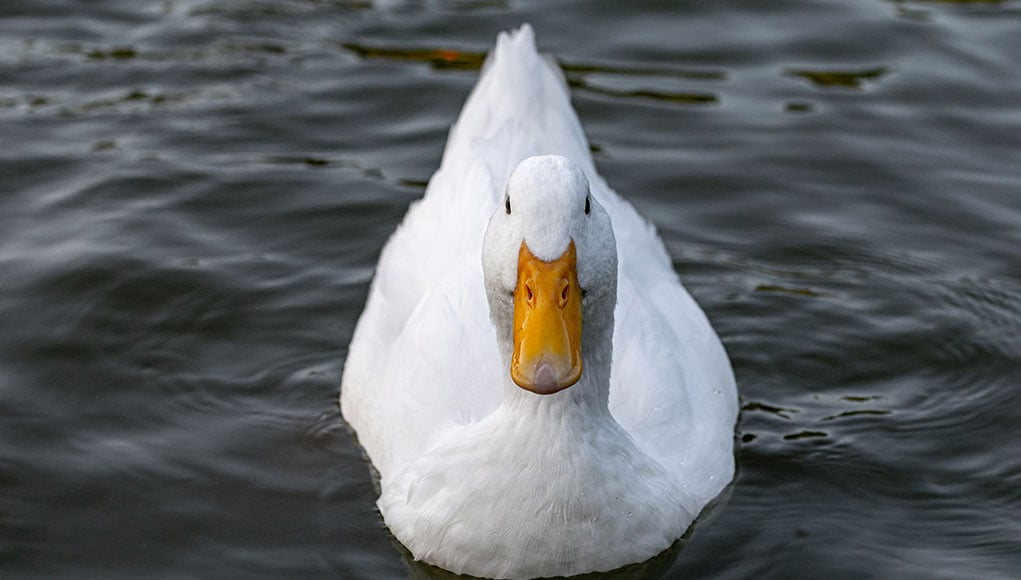 Our pioneering ancestors and early American settlers could not go to grocery stores. They had to rely on what they could grow and raise themselves or barter for to prevent their families from starving.

Heritage duck breeds were highly praised in our history because the winters were harsh and extended without the ability to heat coops or waterers.

Back then, folks did not keep multiple different types of breeds for varying purposes. Doing so just was not practical.

One duck breed was kept to provide meat and eggs for the family, just as those who kept heritage chicken breeds put food on their supper plates.

Today, we refer to versatile breeds as multi-purpose or dual-purpose poultry birds. If you have only a little space to keep a duck breed and need them to share living quarters raising poultry birds that increase your potential food production.

A century ago, good egg and meat producers of traditional lineage were considered a quality breed to keep because of their longevity and productivity.

Why Should You Consider Keeping Heritage Duck Breeds?

Keeping ducks (and even geese) is a growing trend in the United States.

While chickens still reign supreme as the favored backyard meat and egg bird ducks – especially heritage breed ducks– give them some stiff competition for the title.

Because of this “negative” trait, commercial producers and factory farms do not embrace such breeds.

The dwindling of heritage livestock breed population numbers has resulted from decades of falling out of favor in commercial farms.

If you are not attempting to mass-produce duck meat in a rapid amount of time, heritage ducks can be a superb choice for modern homesteaders.

Heritage ducks will not grow as quickly as ducks explicitly crossbred for that purpose.

They produce high-quality meat and eggs and are known to be exceptionally hardy, with little to no human intervention needed to help them survive.

Keeping heritage duck breeds is a labor of love for many homesteaders. Preventing duck breeds that are listed as having critical, threatened, or vulnerable population numbers by conservancy groups can help prevent them from disappearing from the planet forever. 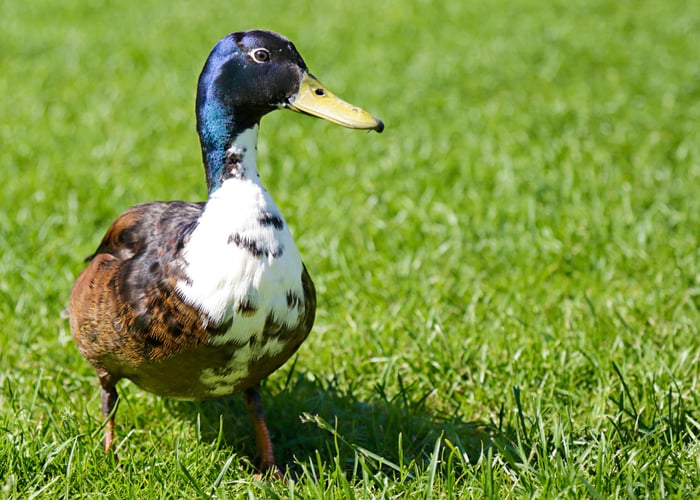 In addition to being hardy from environmental, disease, and pest resistance perspectives, heritage duck breeds also have a lot to offer your garden and backyard.

Ducks are far less destructive in the garden than chickens due to the shape of their bills and how they poke the ground for food.

Because heritage duck breeds are genetically predisposed to fending for themselves, they consume not only significant pests than chickens but more insects than commercially bred and crossbred duck breeds.

Some heritage duck breeds grow more significant than their non-heritage peers and produce more meat. It just takes them longer to do so.

Because most heritage duck breeds weather the cold extremely well, their egg-laying tends to not dwindle as substantially during the winter months. 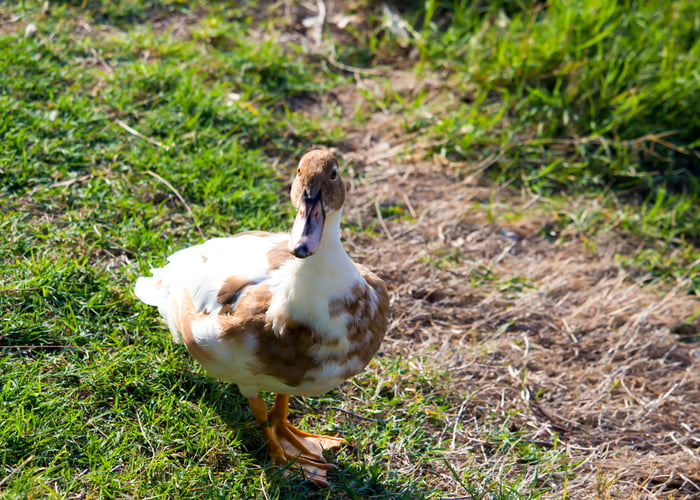 They created heritage ducks of this breed during the 1930s in Germany. Saxony ducks are listed as having critically low population numbers.

After World War II, this heritage duck breed nearly became extinct. The original developer of the species, Albert Franz, diligently ramped up his breeding effort to save the Saxony duck breed.

It was not until 1984 that Saxony ducks were first imported to America by the Holderread Waterfowl Farm and Preservation Center.

Today, Saxony ducks are raised not just for their large and rich eggs and robustly moist meat but also for their coveted beautiful feathers.

Saxony ducks weigh between seven to eight pounds once they mature. Hens typically lay 190 to 240 large white eggs a year. 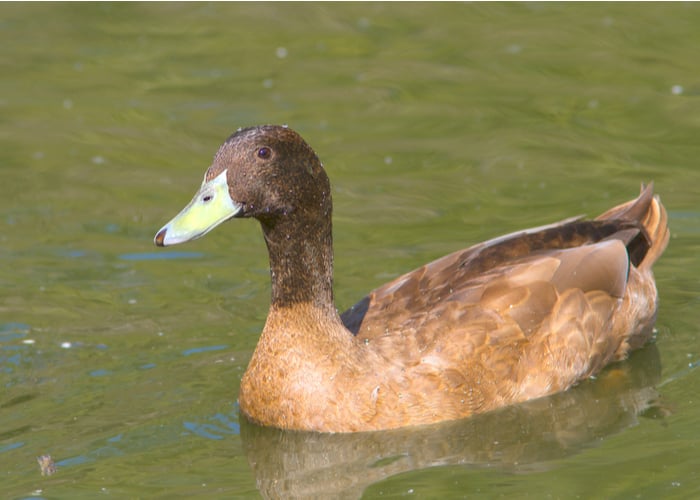 Due to low population numbers, Khaki Campbell heritage breed ducks are on the watch list. Adele Campbel created the Khaki Campbell breed on her English farm during the 1800s.

The breeding effort was inspired by a desire to keep her family constantly supplied with top-quality duck meat and equally well off in eggs.

Members of this heritage duck breed are far more commonly found in the United States than the more rare Saxony.

Khaki Campbell is widely renowned for its egg-laying prowess, which rivals the most popular backyard duck, the Pekin.

Unlike Pekin duck hens, a member of the Khaki Campbell heritage breed hen also tends to be a reliable sitter.

Khaki Campbell ducks are most often raised solely for egg-laying purposes in our modern world. Traditionally they have been raised as multi-purpose meat and egg duck.

Khaki Campbell hens typically lay between 280 to 320 eggs annually during their peak years. Sometimes they will lay until they reach approximately five years old.

The extra-large white eggs laid by a Khaki Campbell hen usually weigh around two and a half to three-quarters of an ounce.

Mature members of this heritage breed weigh roughly four to four and a half pounds once mature, making them medium-weight meat birds.

Khaki Campbell ducks are not initially as friendly and trusting their keepers as some breeds. But, given a little bit of time and gentle persistence, these heritage ducks will warm to you and your family.

Their “farm smarts” take a little while to develop as far as predators are concerned, but they do train for the daily turnout and quickly put up to a free-range routine. 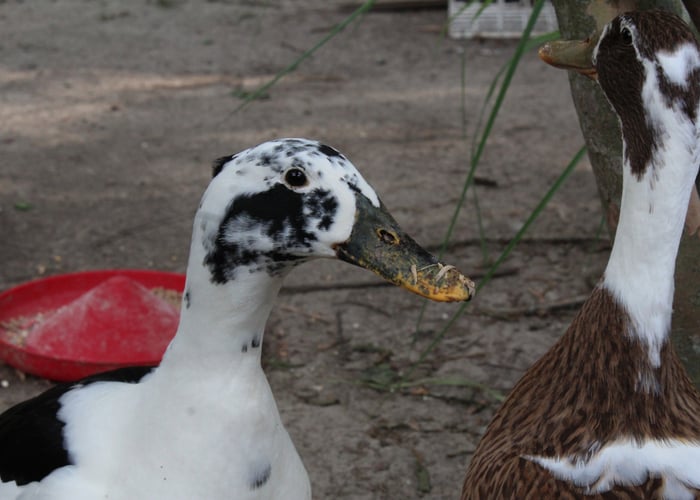 This heritage duck breed hails from England and is considered to have population numbers low enough to place it on the conservation watch list. Ancona ducks are another top choice multi-purpose duck breed.

They grow to reach six to six and a half pounds and lay roughly 210 to 280 eggs per year.

Ancona ducks grow pretty quickly for a heritage duck breed. They are also superb foragers and can quickly rid your garden of slugs and other common significant pests. 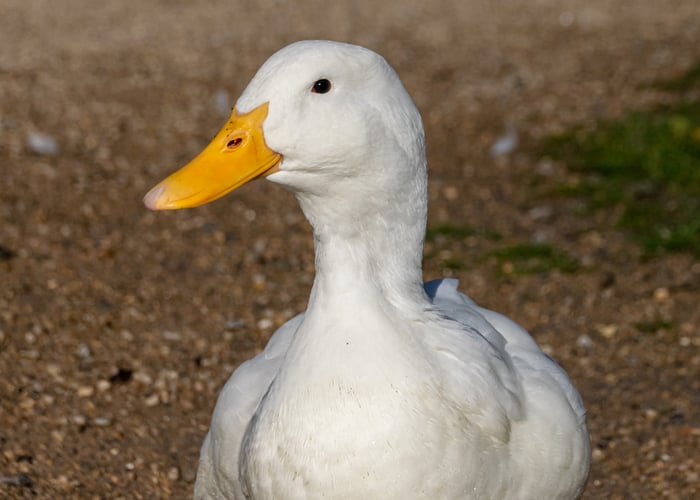 Members of this heritage duck breed are considered critically endangered. If you are looking for a multi-purpose heritage poultry bird, the Aylesbury is not a good choice.

Ancona hens lay only 35 to 125 eggs annually, on average.

But, if you want a high-quality meat bird, the Aylesbury heritage duck breed should be at the top of y9our list. Mature Ancona ducks weigh roughly 10 pounds once they reach maturity.

Hens of this breed have notoriously poor egg sitting and maternal instincts. Expect to need an incubator and a brooder to replenish your flock numbers regularly. 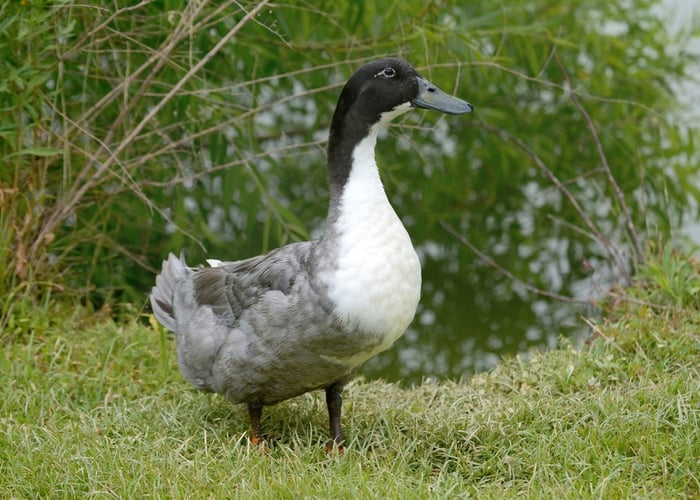 Due to their diminishing population numbers, these heritage duck breed members are at the watch level on conservation lists.

These beautiful poultry birds hail from Sweden and are prime duck meat producers. Their blue feathers are also being increasingly sought after by artisans.

This is due to the intense hues and beauty of their overall plumage.

Some fans of this heritage duck breed keep the birds purely as either a pond ornament or as pets. Their calm and playful demeanor allows them to endear themselves quickly to keepers.

Swedish ducks weigh between six and a half to eight pounds on average once they reach maturity. At the same time, Swedish duck hens lay just roughly 100 to 150 pounds annually.

Their eggs are often referred to as “Easter eggs” thanks to their bright silver, black, and “splash” patterning.

These heritage ducks are best suited for pond and free-range life primarily. Unlike some duck breeds, they do not thrive well if confined to a coop/house and run environment for the bulk of their day.

There is no particular type of care, feed, or housing needed to keep heritage duck breeds. These birds are genetically inclined to find their food.

It is recommended to allow them to free-range and adapt to weather fluctuations in an incredibly hardy manner.

Heritage ducks need housing that will shelter them from the elements. They need poultry bird feed and constant access to clean drinking water.

The heritage duck breeds also need water to swim in, even just a baby pool. When doing each of these, this breed will do just fine.

Carefully consider why you want to keep a heritage duck breed before purchasing one. Do you merely want to enjoy watching the ducks on the pond, collect a few eggs, and help preserve the beautiful breeds?

You’ll then want to select one that most appeals to you based upon their demeanor and physique. Make sure they can thrive in the space you have to dedicate for their use.

Read Next: Raising Ducks For Beginners 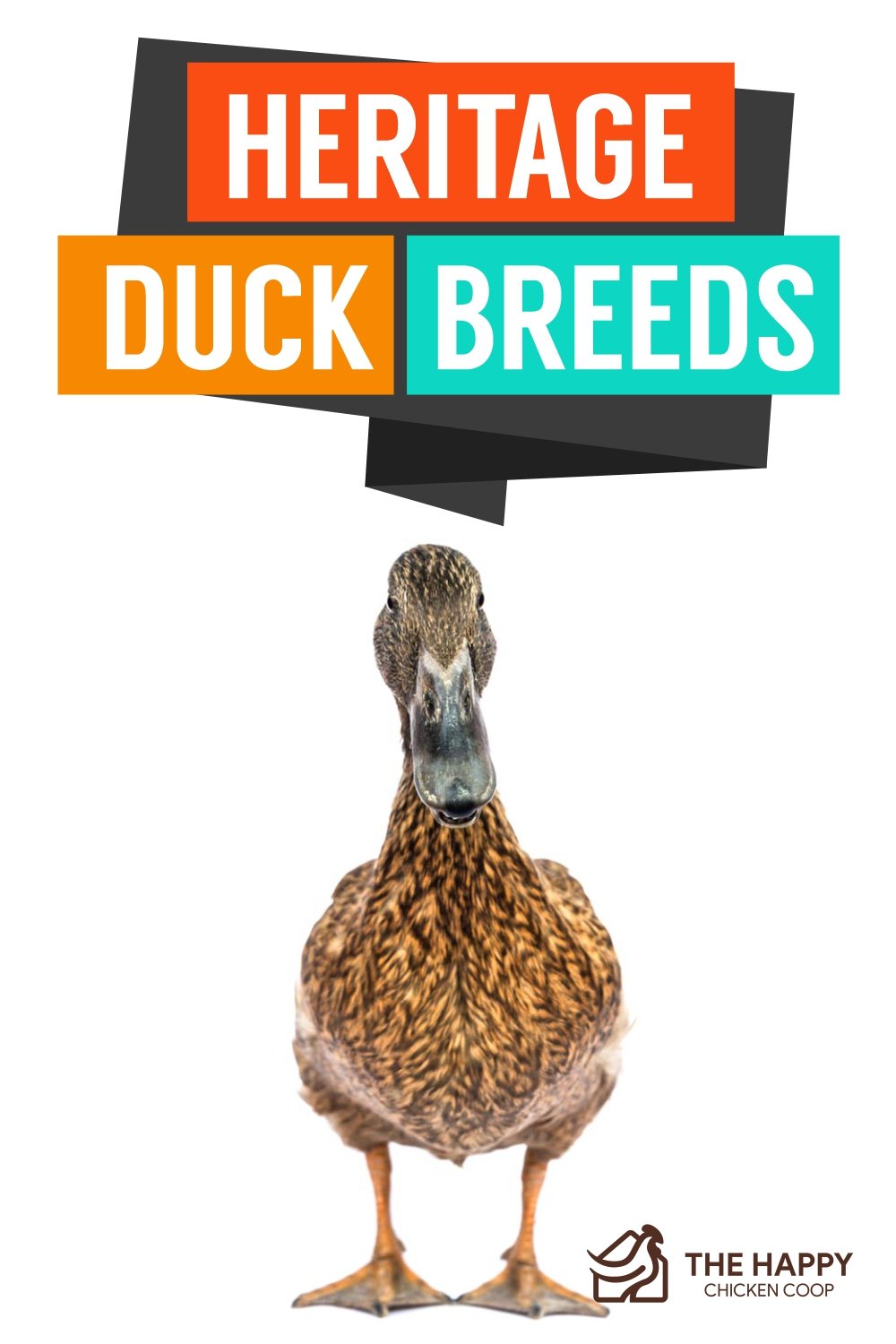