Abacot Ranger Duck Breed: Everything You Need To Know 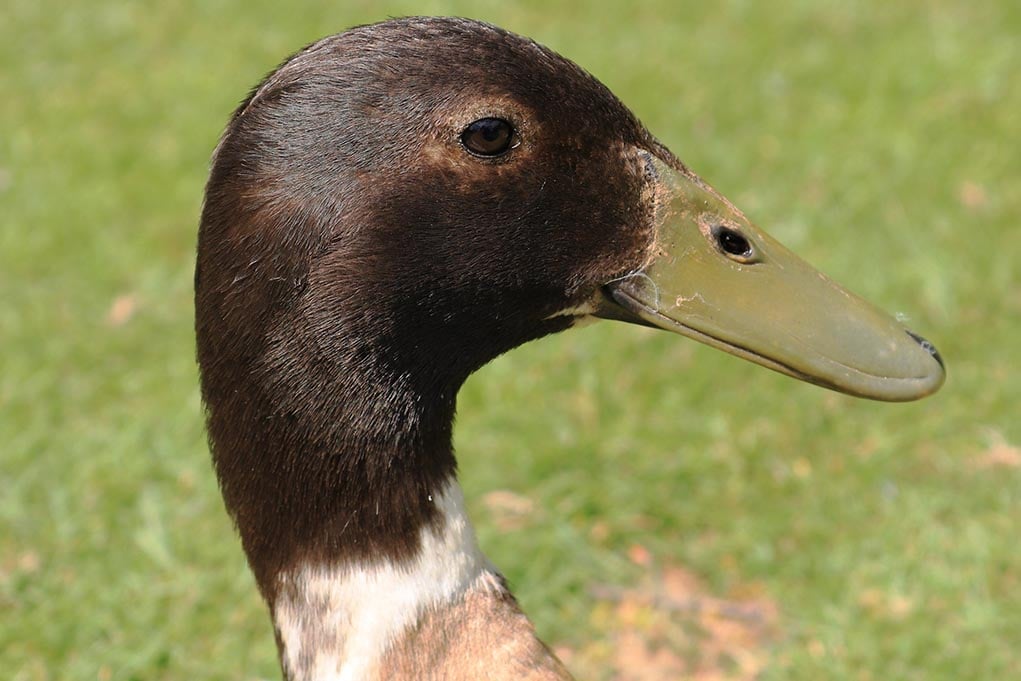 The Abacot Ranger duck is a breed of domestic ducks that originated in the United Kingdom. They are known for being very tame and docile. They were originally bred as pets but have since been used to produce eggs.

One of the more rare breeds of ducks, Abacot Rangers, has a gorgeous appearance and a friendly demeanor that makes them well-suited as animals for pets and exhibition.

But is the Abacot Ranger duck breed right for you? Keep reading to learn more! 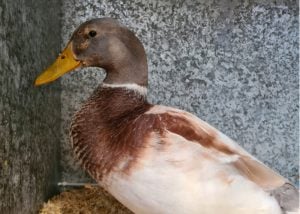 Abacot Rangers are domestic ducks that were first referred to as Streicherente (a name that means “Ranger Duck” in German) and the Hooded Ranger.

Regarded as a utility breed, Abacot Rangers were first developed for meat and eggs, but today, these birds are raised for exhibition as well.

The breed originated in the United Kingdom sometime between 1917 and 1922 – the exact details are a bit murky! However, we can give the credit for creating this breed to Mr. Oscar Gray, a breeder from Abacot Duck Ranch in Friday Wood, Colchester. 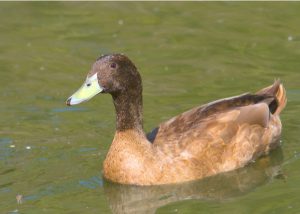 These ducks were bred from Khaki Campbells, several individuals of which had distinct white spots. Gray mated these white-spotted beauties to white Indian Runner drakes, with the progeny then known as Hooded Rangers. He entered them into the egg-laying trails at Wye College in 1922 and 1923. They received the highest possible scores!

After the Bentley egg-laying trials, the UK changed the name of the breed to the Abacot Ranger, and despite being extremely popular for some time as an egg and meat bird in the UK, it eventually went extinct there.

Another breeder in Germany, H. Lieker, revitalized the breed and created a more stable color.

It was accepted into the British Waterfowl Standard only in 1983, indicating a resurgence in popularity there. It is slowly but steadily becoming more popular in places like Germany, England, and Italy.

There are still some variants of the breed that remain today. European Streicherente is smaller than UK Abacots, but some subsets are a bit different in color.

That’s because some hybridization occurred when Captain Leslie Bonnet introduced the Whalesbury hybrid crosses during the 1960s.

Because of this, you might find some Abacot Rangers that have yellow bills and wrong-colored foot webbing (rather than the typical dark bill).

Sadly, it is extremely uncommon to find Abacot Rangers in the United States. These ducks are not commonly bred here, but they can sometimes be shipped from overseas if you are looking to start a flock of your own.

Or you can introduce some new genetics to your existing flock of another breed. 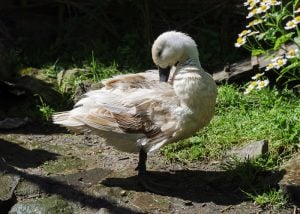 These ducks are hardy and peaceful, often quite friendly to visitors and their keepers. They can also become quite tame, making them good individuals when it comes to the exhibition. They aren’t difficult to train and domesticate at all!

Abacot Rangers rarely fly, despite being relatively lightweight. Because of this, you can easily keep them in a low fenced-in area, like a garden, as long as you provide ample protection from predators.

The Abacot Ranger duck breed is also one that is known for being a good forager. They’ll happily munch on the plants, bugs, and grubs around your property without complaint – something that can dramatically reduce your overall food expense.

They will keep themselves busy all day as long as they are given room to roam around freely. Since they aren’t likely to fly, you don’t have to worry about them getting away from you – or getting into too much trouble! – either.

When caring for Abacot Rangers, the most important thing is to provide them with lots of space. Although these curious ducks aren’t known for being destructive, it’s important to give them plenty of free room to roam and forage so that they stay happy and healthy.

Many people choose to allow their flock of ducks to roam around in the garden after the season has ended in the fall. Here, your Abacot Rangers can pick up grubs, slugs, and snails, along with any vegetables and plant debris that remain on the ground. 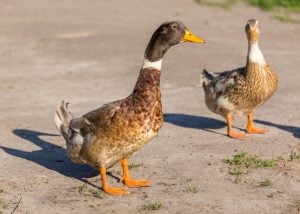 Abacot Rangers aren’t the largest ducks you can raise, but they certainly aren’t the smallest, either. Males, or drakes, tend to weigh around six and a half pounds, while females are around five and a half.

Abacot Rangers have fawn-buff feathers that form a “hood” along with a creamy white body that tends to be streaked or marked in some way with color – these markings aren’t standardized by any exhibition body or standard of perfection at this time.

During the eclipse period, ducks look much darker.

Drakes have dark blackheads with a bit of a green sheen and white rings along their necks. They also have dark, olive green bills. Females look quite similar, but the bills are a darker slate gray shade.

Females have a buff-colored hood on the head that stays the same color throughout the year, though males will change plumage colors up based on whether they are in the eclipse or nuptial stages.

Ducklings are easy to differentiate by their bill colors. It’s quite easy to sex individuals as soon as they are about eight weeks old since the bills of drakes turn olive green and females become gray.

Interestingly, Abacot Ranger ducklings are often confused with miniature Appleyard and Harlequin ducks. The easiest way to tell them apart is that the Abacot Rangers are greedier and larger, at least until they are fully feathered.

Males are much brighter and easier to identify than females, but both have their own unique, characteristic beauty. Both sexes grow to around 20-24 inches tall. 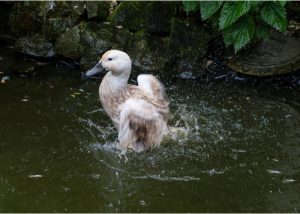 Abacot Ranger ducks are some of the longest-living ducks. They can typically live for around ten years when cared for properly.

However, their productivity will decline sharply long before this. If you plan on raising Abacot Rangers as long as possible, don’t expect to continue to get eggs from them during this time.

You might instead expect to raise a productive Abacot Ranger duck for around four or five years.

Most ducks of this breed start laying at around five to six months old, although there is some variation. They’ll lay for several years and can do so around the calendar year. 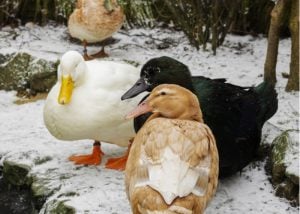 Abacot Rangers are often compared to Harlequins and Khaki Campbells for their excellence in laying, the latter of which makes sense given the genetic link!

They are reasonable layers, generally producing around 180 to 200 eggs each year. These eggs weigh around 60 to 70 grams and are relatively large, comparable in size to Indian Runners. They are bright weight and have a solid, strong shell.

Abacot Ranger females are known for being decent sitters. Their modest body size means they aren’t likely to crush the eggs beneath them, and they can reliably hatch their own clutches of eggs without too many problems.

They frequently go broody, too, so while you can choose to incubate your own duck eggs, you shouldn’t have any problem letting Mama take care of it herself, either!

The Meat of Abacot Ranger Ducks

Although Abacot Rangers look a lot like Khaki Campbells, they are better suited for the dinner table. That’s because they have a slightly larger bill. On average, a mature bird will weigh around five or six pounds when it’s time to process it for meat.

The taste of Abacot Ranger duck meat isn’t anything to write home about – although it is lean, flavorful, and delicious, it is no more remarkable than any other breed of commercial meat duck.

There are countless benefits associated with raising Abacot Ranger ducks.

For one, these ducks are exceptionally friendly. Raising Abacot Rangers is sure to be a fun, rewarding experience. Plus, since they are so friendly and social, they are good options for families with children or other pets.

Not only that, but they are relatively free of any major health problems. Since they love to free-range and can more or less take care of themselves, you’ll likely find that these ducks are not expensive to care for, either.

Of course, you can’t overlook the eggs. Abacot Rangers are reliable lawyers who will provide your family with plenty of fresh eggs (and meat, if you choose) along with a fun overall experience.

Abacot Rangers love to forage, so you won’t have to worry about providing them with too much feed or entertainment.

Many people who choose to raise Abacot Rangers do so in orchards, allowing them to forage and eat common orchid pests, like worms and grubs. Just make sure there is some protection from foxes here!

Abacot Rangers aren’t overly large, so they don’t require too much space. They produce less waste than chickens, and the manure can be used as fertilizer in your garden.

As hardy ducks, they can tolerate most climates, whether hot or cold, as long as they have an unheated shelter to go into during extreme weather.

One of the most obvious benefits of raising the Abacot Ranger duck breed? It’s a stunning animal to look at. Their color patterns are absolutely gorgeous and are sure to add interest to your backyard farm.

Abacot Rangers are fantastic mothers. They will care for their young and sit quite well, going broody often. Since the ducklings can be sexed from a very young age, it’s easy to raise a flock that meets your specific breeding needs and ratios as well.

As with any duck breed, the Abacot Ranger duck breed is not without its challenges. Just like any other kind of duck, you’ll need to dedicate time to feeding and watering your ducks at least once (sometimes twice) per day.

You will need to keep the pen clean to help your birds stay healthy.

When comparing Abacot Rangers to other duck breeds, one of the biggest disadvantages of choosing this breed is that it is unexceptional in most categories.

However, it does offer a unique appearance and can add a one-of-a-kind appeal to your backyard flock, so that’s something worth noting.

Sadly, it is not recognized by the American Poultry Association, so it is usually not used for formal exhibitions in the United States (though it is in Great Britain).

A final challenge in raising Abacot Ranger ducks is that far too few people do it. Because of this, it cannot be easy to find ducklings of this rare breed to purchase. In fact, many breeders and duck enthusiasts have never even heard of the breed!

Where to Buy Abacot Ranger Ducks

It can be tough to find hatcheries that specialize in Abacot Ranger ducks. As few hatcheries and breeders sell these relatively rare individuals in the United States, you may have to search internationally.

Some international breeders to consider include Avicoli Ornamental and Ashton Waterfowl.

Ducks are a great choice for anyone who wants to start raising livestock or poultry. You can raise ducks on pasture and in the vast majority of climates – plus, they tend to be friendly and docile.

If you’re thinking about getting into raising ducks, consider the Abacot Ranger duck breed. Although they can be difficult to find at hatcheries, the search will undoubtedly be worth it in the long run! 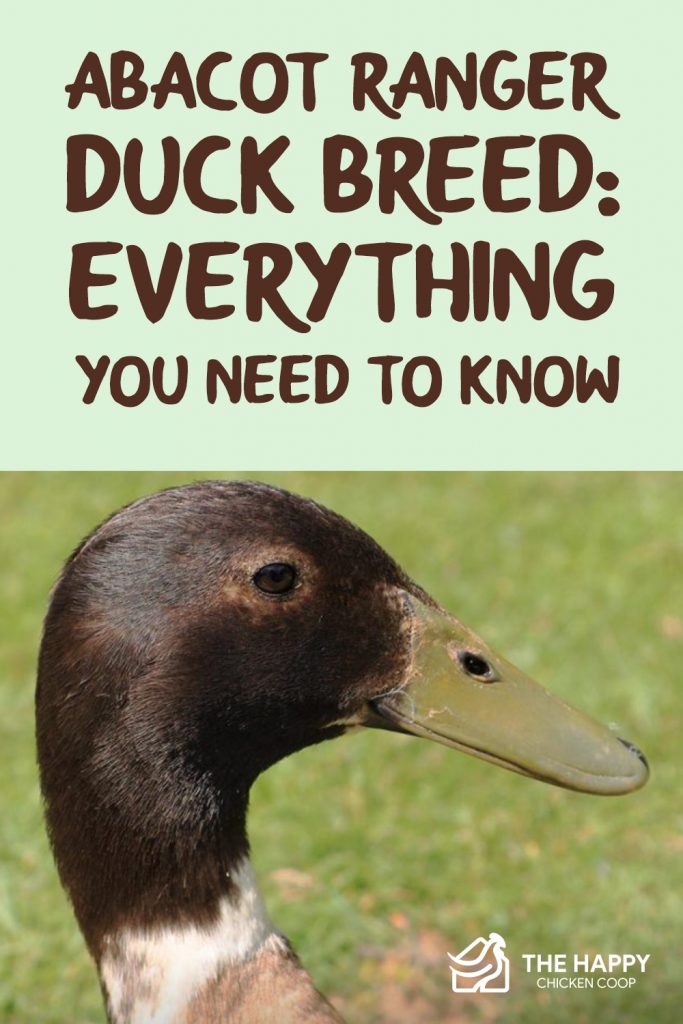