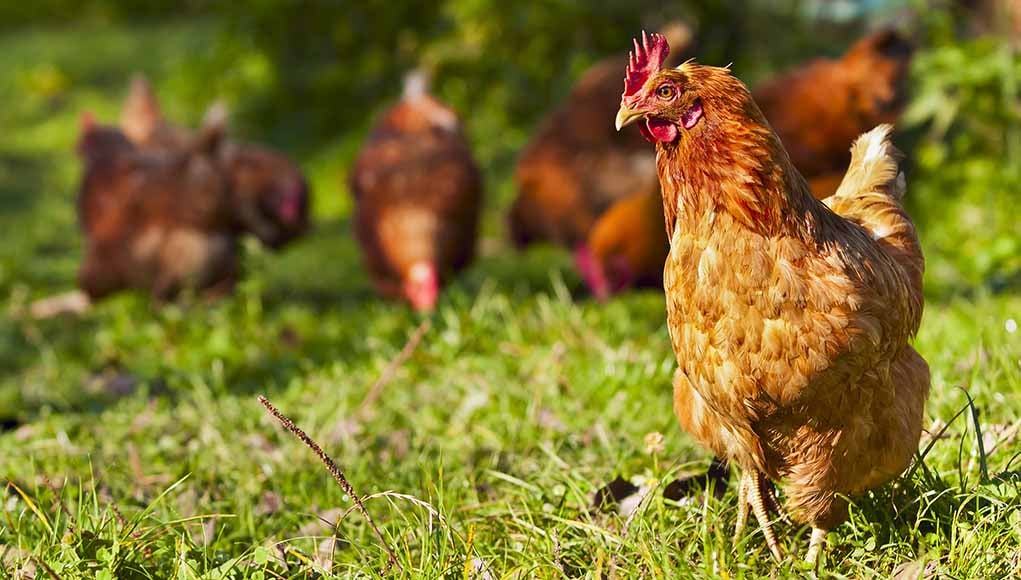 Are you curious about the best chickens for eggs and meat?

You’ve come to the right place.

When it comes to raising chickens, it might seem like much of it is a game of choice. Some chickens produce more eggs while others produce great-tasting meat. It can be hard to choose between the two characteristics, particularly if you want to be able to benefit from both!

To help you decide, we’ve created a detailed guide on the top dual-purpose chicken breeds along with an overview that can help you choose.

What Are Dual-Purpose Chickens?

Dual-purpose chickens are those that can be raised both for eggs and for meat.

In most cases, you will raise a chicken like this primarily for eggs during its more productive laying years (for around one to three years) and then cull it for meat.

Since the meat can be quite tough at this point, as the birds are older, an alternative is to raise a larger flock, keep some of the birds as egg layers, and then cull younger ones each year. You’ll replenish your stock with eggs that you hatch in an incubator (or naturally, though this can be less reliable) each spring.

Dual-purpose chickens make it easier to raise chickens for less expense. You’ll also be able to slash your personal grocery budget – and since you’ll know exactly where your food is coming from, you can ensure that you’re getting a better-quality product.

There are lots of benefits to raising dual-purpose chickens over traditional “egg-only” or “meat-only” breeds.

For one, you can say goodbye to worries about having to maintain and feed two separate flocks of chickens. This can be time-consuming and expensive, especially if you have to build different housing systems.

These chickens tend to be heritage-breed birds, meaning they aren’t as likely to suffer from the many health problems that can plague the more modified breeds of today. 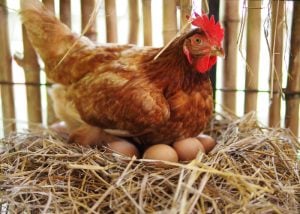 How Many Chickens Do I Need for Eggs and Meat?

So how do you know how many chickens you should buy?

The numbers vary and there’s no magic formula you can use to figure it out.

However, for personal family use, you can estimate that you need about two chickens per person – this will give you up to seven eggs per week, depending on the breed. For meat, you’ll need about 18 meat birds per person.

Again, this varies depending on so many factors. How much chicken does your family eat? Will you eat the entire bird, or just the breasts? Will you process it down for its bones (for stock) and its feathers (for crafts)?

Consider your family’s habits and needs before deciding how many chickens you need. 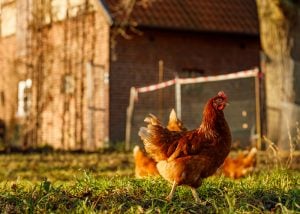 What to Look for When Choosing Dual Purpose Chickens

There are a few features you will want to consider when shopping for the ideal breed.

The first is what kind of production needs your family has.

How many eggs do you eat per week? How much meat?

Next, think of your abilities in terms of space. How much room do you have available in which to raise chickens? Multiple acres? Just a small backyard? This will impact both the type and number of chickens that you raise.

What sorts of characteristics would you like your flock to have? Do you want them to lack flightiness? Should they be good free-rangers? Have great abilities when it comes to flying away from and escaping predators? Do you want them to be friendly lap chickens with whom interacting is easy?

Ask yourself these questions first – then, consider the top dual-purpose breeds as described below!

Best Chickens for Eggs and Meat: 15 Breeds to Consider

Ready to start raising backyard chickens for eggs and meat? Here are some of the best breeds to put on your list of options to consider. 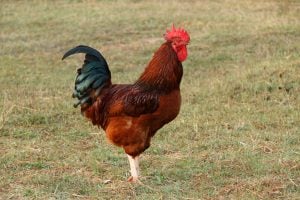 Both the Rhode Island Red and its close relative, the New Hampshire Red, deserve spots at the top of our list of the best chickens for eggs and meat.

Though the Rhode Island Red tends to be a bit smaller than some of the other breeds on the list, it still offers a wonderful bang for your buck.

These red birds can be brighter or darker in color, but all have red wattles, ear lobes, and combs, indicating that they lay brown eggs.

They are long-lived chickens, living an average of six years. The roosters grow to around eight and a half pounds and hens are slightly smaller but lay up to six eggs a week. 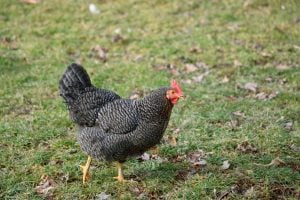 The Plymouth Rock breed is another top contender. It was first seen in Massachusetts in the 1800s and can be raised both for meat and its large brown eggs. Males weigh around eight pounds while hens are a few pounds less – but lay up to 200 eggs each year. 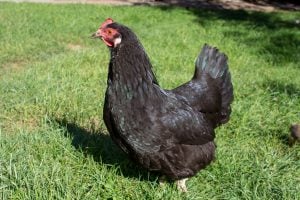 The Australorp is a fantastic egg layer, known for holding the world record for laying the most eggs in a year. This heavy breed will also provide lots of meat for you.

Plus, at eight to ten pounds, these large chickens are a great size for the dinner table. 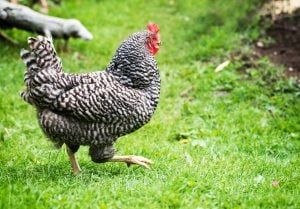 Dominiques are America’s oldest chickens! They first came to the United States more than 200 years ago and have been referred to by countless names since then, including the Old Grey Hen, Blue Spotted Hen, Dominic, and Dominicker.

These birds are quite similar to the Plymouth Rock because until 1871 they were actually the same breed. They are hardy, self-sufficient birds and are great for both eggs and meat (despite the fact that these birds aren’t breaking any weight records any time soon).

Roosters grow to an average of 7 lbs each while hens come in around 5 lbs and lay about three to four eggs each week. 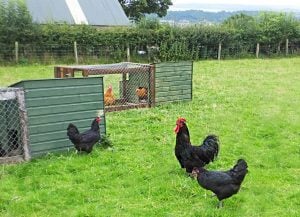 The Jersey Giant is an American breed that is one of the heaviest of all chickens. The only downside to raising a Jersey Giant is that it requires an exceptional amount of food to get this bird to its full size and ready for slaughter.

That said, roosters are rarely aggressive and the hens lay lots of large brown eggs (around four per week). These birds are also known for being excellent winter layers. 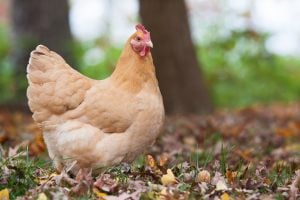 One of the heaviest breeds on the list, the Orpington chicken is a calm, easygoing bird that is known for being an excellent layer of medium to large eggs. It lays exceptional amounts of eggs and has a calm, cool personality.

It comes in several different colors, including Black, Blue, Buff, and White. Breeders have continued to experiment with and perfect this breed over recent years, adding new color patterns and feather types that aren’t yet recognized by breed standards but are still fun to consider. 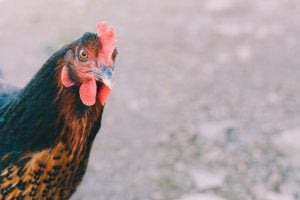 The Black Star chicken is a hybrid, one of the few dual-purpose hybrids that exist. This chicken is a prolific egg layer, producing up to 300 eggs each year. Roosters can easily reach eight pounds, too, making this bird a wonderful choice as a dual-purpose breed.

These chickens are easy to identify, with roosters having black feathers and a white dot on their heads. They are easygoing, friendly chickens that perform well in the vast majority of climates.

One thing worth mentioning is that, if you want to maintain a self-sustaining flock of chickens that don’t need to be replaced with store-bought chicks, Black Stars might not be the right choice for you. They don’t breed true so you’ll never know what you’re going to get. 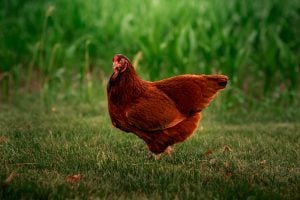 Buckeyes are great dual-purpose chickens if you live in a cold climate. These birds can be a bit cranky toward other farm animals but otherwise, they are quite docile and extremely adaptable.

They lay around 200 eggs each year and are ready for the dinner table in just four to five months. Roosters average nine pounds each. 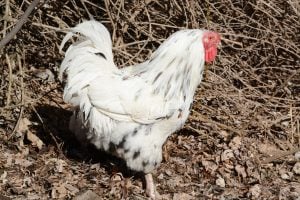 If you live in a cold climate and want to raise a wonderful dual-purpose breed, you might also want to consider the Chantecler. This bird is docile and matures early, both in terms of when it starts laying eggs and when it is ready to be slaughtered.

It’s a wonderful free-ranger, foraging for its feed on its own. Males grow to around nine pounds each while females come in at around seven. They’re ready for slaughter in less than four months, too. 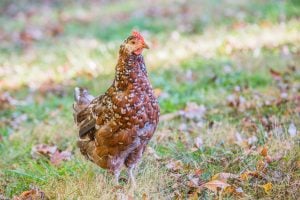 The Speckled Sussex is known for laying up to four large eggs each week. This chicken breed was added to the breed standard in the 1900s and served as the primary meat breed (along with the Rhode Island Red) until hybrids were developed around World War II.

Therefore, it’s clear to see that this breed is wonderful for both meat and eggs! 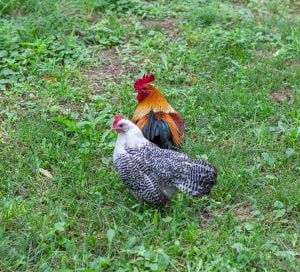 You won’t find the Egyptian Fayoumi on every list of great chickens for eggs and meat, but we think it deserves a spot here for sure. This bird matures quickly, laying lots of eggs before it’s ready to go to the dinner table.

These active forages perform well in hot climates (hence the name) and can be a bit wild! They aren’t aggressive but are known for their disease resistance.

They are some of the smallest dual-purpose birds you can raise, only growing to around four or five pounds, but are still great birds to consider nonetheless. 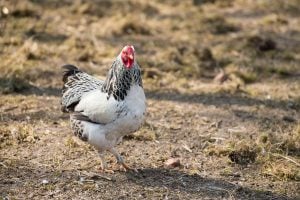 Like the Speckled Sussex, the Wyandotte chicken is another prolific layer, known for producing up to four eggs each week.

They come in a variety of colors, including blue, black buff, Columbian, partridge, silver penciled, silver laced, and golden laced.

A similar bird to the Wyandotte that you might consider is the Sebright, which is more common overseas.

The Faverolle (also known as Faverolles) is a chicken breed that was developed in France in the 1860s. This breed was originally bred to be raised for both eggs and meat. Now, this breed is often raised as a pet or for exhibition, too. 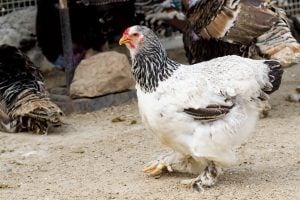 The Brahma chicken breed was developed in the United States from large birds that were imported from the Chinese port of Shanghai.

Originally, there were dozens of strains and names for the breed, but now, it is known as the Brahma and raised both for eggs and meat. It’s one of the best dual-purpose breeds to consider if you’re interested mostly in meat production—this chicken was America’s primary meat breed until 1930 or so. 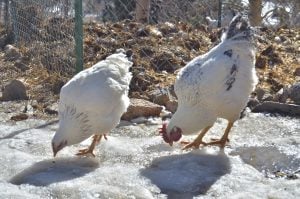 Last but certainly not least is the Delaware chicken. This bird was once one of the most popular chicken breeds in the United States but is now considered critically endangered.

Nevertheless, it’s one of the most beautiful chickens you can raise for both eggs and meat. Its plumage is breathtaking to behold and it’s also quite friendly. It’s known for going broody, too, a plus if you want your hens to hatch their own eggs.

Dual Purpose Chicken Breeds: Are They Right for Me?

​​If you’re new to raising chickens, it can be hard to know where to start. There are so many breeds of chicken out there and each one has its own unique qualities.

So are dual-purpose chicken breeds the right fit for your needs? There’s really no way to tell until you give them a try!

However, there are many advantages to raising dual-purpose chickens. They allow you to save space, money, and time by only caring for one flock (rather than two separate groups of meat birds and egg layers).

Plus, unlike some of the “improved” commercial-quality meat birds, dual-purpose chickens can be raised as chicks right from the incubator. Is there anything better than being able to hatch your own eggs at home? We think no!

Consider a few of these dual-purpose chicken breeds as you’re starting your flock. They’re some of the best chickens for eggs and meat – we guarantee you will not be disappointed! 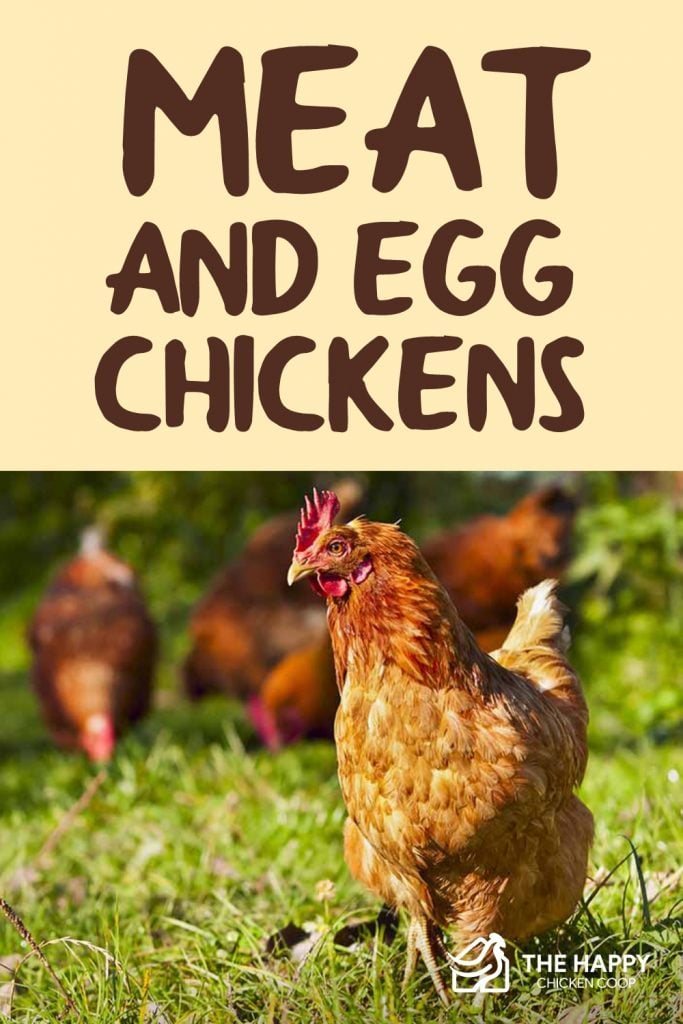