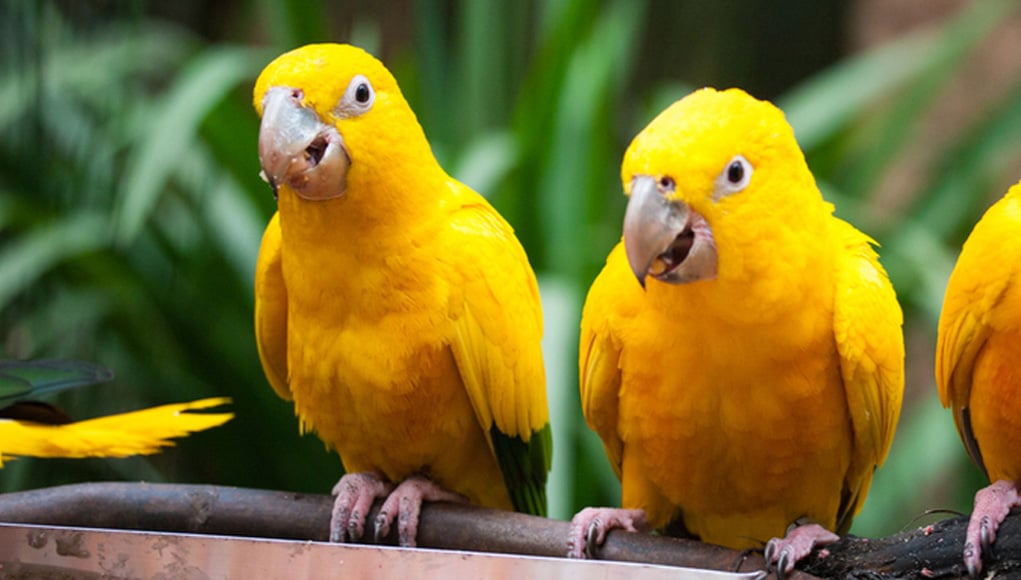 Have you ever heard about the Imperial Amazon? How about the Victoria-crowned pigeon?

If you haven’t yet, that’s not surprising since they’re among the rarest pet birds in the world.

Despite not being able to enjoy fame in the avian world, these birds have unique qualities and deserve to be protected. Are you wondering and thinking, “what’s the rarest bird on earth?”

Good thing because we curated a list to help you know more about them!

We chose ten birds that came from different species and backgrounds. So you can expect to discover unique birds such as:

So, if you’re excited to witness these rare beauties, let’s dig right into it!

Presenting the top 10 rarest pet birds in the world, their personality, and origin. 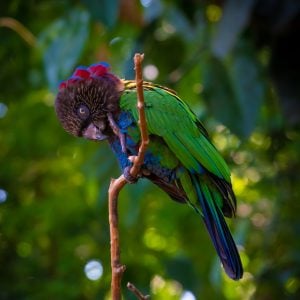 Kicking off the list of the rarest pet birds is the Imperial Amazon, also known as “sisserou,” from the Dominican Republic.

Male and female Imperial amazons are proud of their brown or purple coloring on the lores and forehead. But the purple tones eventually turn browner as they get closer to the face and ear-covert regions.

Their upper plumage is dark green, their chest is dark purple, and their feather’s edges are black.

Since these royal parrots are shy, they’re challenging to approach in the wild. But they like to flock together with other red-necked Amazons.

They have powerful wings, and they excel in climbing and flying. On top of that, they can camouflage by their plumage in the wild.

However, Imperial parrots are critically endangered, with a population of 50 mature in 2019 due to habitat destruction. 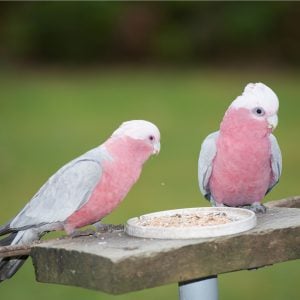 This Rose-Breasted Cockatoo belongs to the smallest group of cockatoo species and is among the rarest pet birds in the world.

They are named because of their pink rose color feather from the lower face to their chest and pinkish-white on their head. In contrast, the other part is filled with gray color.

In wild areas, they feed on grasses, leaf buds, flowers, and seeds. But in some instances, they eat insects for more proteins.

These rare pet birds require lots of attention and time for socialization. So, be ready to buy time for them if you plan to purchase Rose-Breasted Cockatoos. 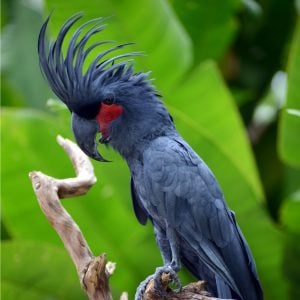 This black palm cockatoo, one of the rarest pet birds, was once a native in Australia, especially in northern Queensland. But, they can also be found in Indonesia and New Guinea.

The black palm cockatoo has an intense, smoky gray hue that can vary in intensity depending on the individual bird. Their very long crest, feet, and legs have the same color.

They can make an excellent companion, but the black palm cockatoo won’t be as friendly as other parrots.

The bird must be given a lot of care and continuous training to become domesticated. You may train this intelligent and sociable bird to obey your directions if you are diligent.

But if not, you’ll have a hard time.

This bird’s natural vocalizations, which include their distinctive “hello” have a human-like sound. So, they’re well-suited for word learning. 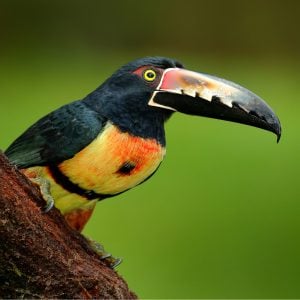 Sitting in the fourth place on our list is the green aracari with dark green to black feathers on the back and tail and a light green or yellow chest.

They feature a burgundy-colored head with a tri-colored beak that’s a little over the top due to its size. But the combination of burgundy, yellow, and black somehow complements their body plumage.

Green Aracacris are sexually dimorphic, so there’s a noticeable difference between males and females.

The female variation sport a dark red to brown coloration while male aracaris’ neck and head feathers have deep or dark colors.

These birds are active and social. They enjoy spending time and foraging with other members of their flock in small groups.

However, they’re needy for attention and require a large cage where they can have the freedom to spread their wings and fly. 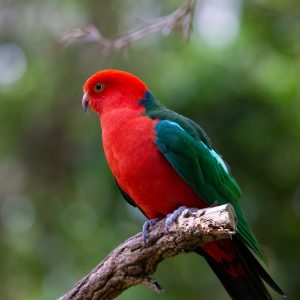 Another rare species from Australia goes by the name Australian King Parrot.

True to their name, these birds possess a regal aura, thanks to their striking red head feathers.

They’re sexually dimorphic, too, as males have completely red heads while females have green heads and breasts. But both boast a red belly and green plumage at the back, wings, and tail.

They’re mostly found along the east coast and ranges of Australia, from Cooktown in Queensland to Port Campbell in Victoria.

Unfortunately, their personality isn’t as attractive as their visuals. Australian King Parrots aren’t affectionate, nor do they like petting.

Furthermore, they want a large cage with sufficient space to roam around, and they need handlers that know and understand when they need space.

But that doesn’t mean they’re anti-social. Many Australian king parrots love interacting with their owners and can learn a few words with consistent training.

These birds are a familiar sight in Australia, but they’re rare in the USA and other parts of the world. 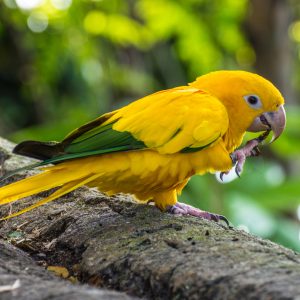 Now we’re down to another royal species that belongs to the rarest birds in the world; the golden conure.

These birds boast a bright yellow plumage with a touch of green at the tip of their wing feathers, tan beaks, and pinkish legs.

Golden conures are native to northeastern Brazil, specifically south of the Amazon river.

They’re active as pets, and they’re into climbing, chewing, and playing! Their curiosity urges them to explore the world around them, so they need supervision when out of the cage to avoid accidents.

Since golden conures are smart, they need plenty of stimulation. On the brighter side, these birds can develop an extensive vocabulary.

Like other birds, they’re prone to self-destructive behaviors when neglected.

It’s been an endangered species since 1975, and its population continues to decline due to habitat destruction and illegal trapping for the pet trade.

That’s why it can be difficult to purchase since this conure is protected and heavily regulated. 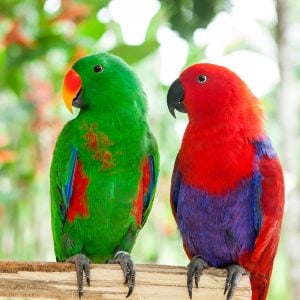 You may have heard about Eclectus Parrots already, but did you know that they’re one of the rarest birds in the world?

These charming birds don’t just have the beauty and brains as the previous species but also have lovable personalities.

Their origin can be traced to the Solomon Islands, but others were spotted in Australia, Indonesia, Moluccas, and New Guinea.

They got their name from the word “eclectic” because male and female Eclectus parrots look so different!

Male Eclectus have emerald green plumage with bright orange beaks and hints of red and blue under their wings.

On the other hand, females are clothed with red plumage, deep purple markings on their chest and tails, and black beaks.

Eclectus parrots are friendly, gentle, affectionate, and intelligent. In fact, they’re fast learners who can compete with Amazons and African greys in speaking.

However, these rare pet parrots have jealous tendencies. So, they require undivided attention. But you don’t have to fear if you have children because they have a gentle nature. 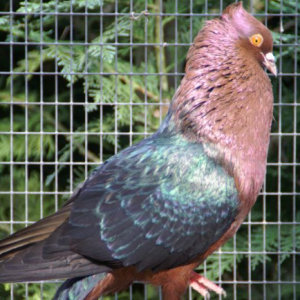 Here’s another unique and rare pet bird species with distinctive color due to selective breeding, the Archangel pigeons.

These birds have bronze or gold plumage with a metallic sheen on their feathers.

They have vivid orange eyes and black, white, or blue wings. This breed was created to be a domestic bird because it cannot live in the wild.

They are mainly kept as beautiful pet birds and in exhibits.

Despite the lack of supporting documentation, it is widely believed that this breed originated in the Balkans, especially in Dalmatia (now Croatia) or Illyria (Montenegro/Albania). 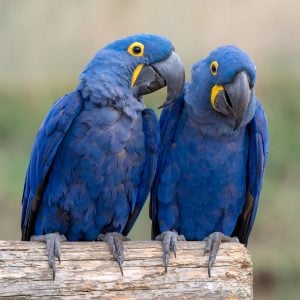 Now we’re down to the most prominent but still one of the rarest pet birds ever!

For good reasons, these macaws with iconic cobalt blue plumage and yellow rings around their eyes are showstoppers.

Aside from their striking visuals, they’re also intelligent and friendly.

They can pick up some words and phrases and learn various tricks.

However, due to their powerful beak that carries 200 PPI, they can be dangerous for kids. Their beaks can easily break a perch in one snap.

Furthermore, they live more than 60 years, so there’s a high chance they’ll outlive their owners. Their hefty price also makes them unideal for first-time bird owners.

Hyacinth macaws can bond strongly with their owners, but it takes a lot of patience, money, and time to raise and train them.

On top of that, they’re endangered. So it’s no surprise that they landed on our rarest birds list. 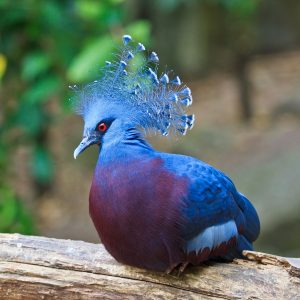 This majestic creature with a plume of lacey head feathers was named to honor her majesty, Queen Victoria.

This rare bird that nestles in the rainforests of New Guinea is arguably the fanciest on this list.

They’re intelligent and easy to tame.

They can weigh up to 7 pounds and are enormous. Their bodies are covered in light blue feathers with maroon patches on the chest.

These pigeons are the world’s largest species of pigeon. They require a lot of areas to move around because they spend most of their time on the ground.

They are suitable in zoos where they can be appropriately cared for because it is pretty unlikely that these pigeons will be able to find what they require in your home.

Unfortunately, their population is continuously declining due to deforestation, and Victoria-crowned pigeons remain on IUCN‘s “near threatened” list.

What is the best exotic bird to own?

The most exotic birds you can ever own are Hyacinth macaw, Victoria crowned pigeon, Golden Conure, Australia King Parrot, Cockatoos, Green Aracari, and Archangel pigeon.

The rarest parrot has to be the Spix’s macaw which is listed as extinct per the International Union for Conservation of Nature (IUCN) ‘s Red List. Next to the Spix is the Kakap, the world’s fattest parrot with a population of less than 250 living individuals.

What is the rarest conure?

The rarest conures are the Queen of Bavaria Conure or the Golden Conure. They’re spunky and affectionate birds with vocal and loud personalities.

That’s why they’re a poor choice for those living in apartments and condominiums.

What is the rarest Amazon parrot?

The Puerto Rican Amazon is the rarest Amazon bird in the world. Most of their remnants live in the Rio Abajo State Forest and El Yunque National Forest.

These birds sport a green plumage with blue highlights on their wings, a white ring around their eyes, and a white beak.

How rare is a blue macaw?

Blue-throated macaws are rare since approximately 400 are left in the wild.

These charismatic birds are frequent victims of the illegal pet trade and cattle ranching, which lead to their critical state.

What is the rarest cockatoo?

The world’s rarest cockatoo is the Yellow-crested Abbott cockatoo which was spotted at the Masalembu Archipelago in Indonesia.

Another rare bird of this species is Palm or Great Black Cockatoo, native to New Guinea, Aru islands, and the Cape York Peninsula.

They’re extremely rare, but they breed well and thrive in captivity. Their population has stabilized in recent years.

However, red macaws remain on IUCN’s “critically endangered” list due to their small population and limited range.

And that’s it! We hope we’ve answered your question about “what is the rarest pet bird”.

Do you find the rarest pet birds on the list beyond fascinating?

We cannot help but fall in love with their striking visuals too! They all deserve love and attention for sure!

However, birds like Imperial parrots and Golden Conures are critically endangered.

It can be tempting to have them as pets, but keeping them in wildlife sanctuaries would be better if we’d consider their best interest.

So, if you need intelligent pet birds to add to your home, check out this list instead. And meet the most talkative birds that can brighter up your home!

READ NEXT: Top 10 Pet Birds That Talk With Extensive Vocabulary