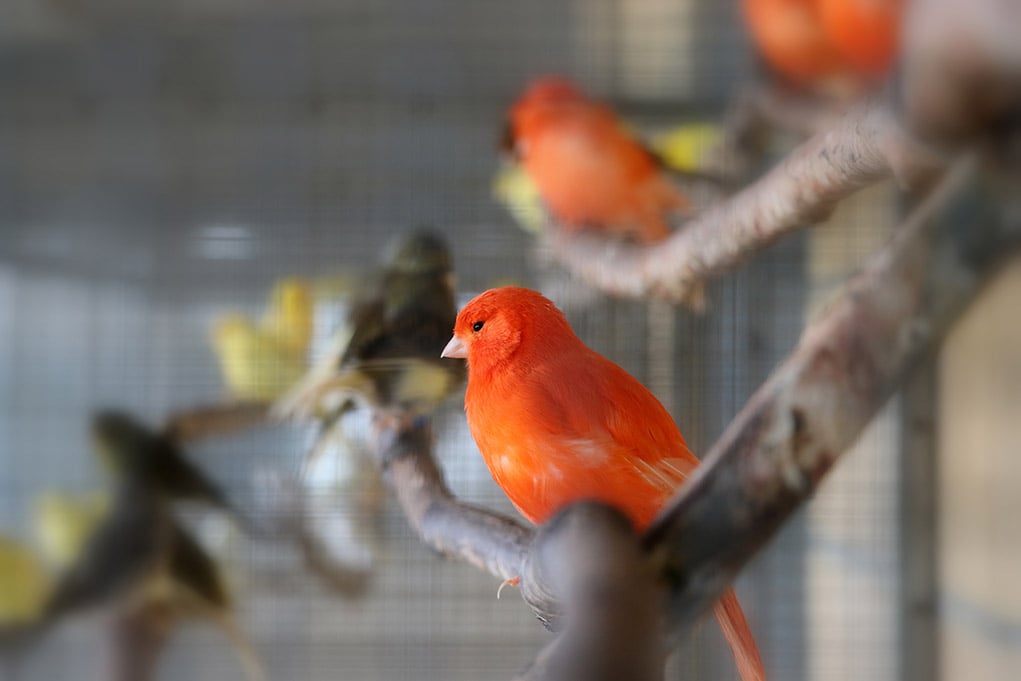 If you’re considering getting a canary for your home, it’s important to know the different canary bird breeds before deciding.

There are many types of canaries, and they come in all shapes and sizes.

Some people may be interested in rare birds that are specially bred to have unique colors or patterns.

Others might want an easy-going bird that is adaptable to their space and lifestyle.

This post will give you a low-down of the top domestic canary breeds from A-Z and hopefully help you determine which type of canary is right for you!

The Canary Bird: What Are They?

Are you interested in raising a pet bird? If so, choosing a canary is a wise choice.

This type of bird is a favorite among avian enthusiasts, raised for more than a century in captivity.

Like dogs and cats and other popular types of pets, the canary has been bred extensively, resulting in more than 200 different breeds.

Much like cats and dogs, each canary breed is prized individually for a unique appearance, skill, or some other type of trait.

The average canary has a lifespan of up to ten years and, despite being small, is prized for its beauty and its chattering, whistling calls.

These hands-off pets are easy to raise because they don’t require a lot of specific care or dedicated attention.

They are named for their origins in the Canary Islands.

The original canary found in the wild was just a green-colored finch, which wouldn’t have been anything out of the ordinary except for the lovely song.

The canaries are prized for their beautiful, melodic voices.

These voices inspired the first European settlers to begin breeding these birds and taking them back home.

They capitalized on small mutations, creating breeds that looked much different from each other (and nothing like their wild ancestors).

The canaries are solitary species that prefer to be raised on their own. If you decide to raise canaries, you’ll want to keep individual birds in their own separate cages.

If you don’t, life-threatening fighting could occur – these birds are extremely territorial.

That said when provided with the proper housing and feed (birdseed is not enough – you’ll need to provide your canaries with a supplement of nutritious pellets and other foods).

You should be able to keep your pet alive for many years. The canaries are the longest-lived pet bird species, with some living for as many as 14 years with the right care and attention!

What is the Best Canary Bird? An A-Z List

If you’re in the market for a canary, you’ll want to consider these top breeds.

There is no single best breed for everyone. Still, the good news about canaries is that, despite extensive breeding over the years, most behavioral characteristics remain the same among different breeds.

Only the appearance of these birds differs between the separate breeds.

Therefore, regardless of where you live or how much attention you want to donate to your new pet, you shouldn’t find much difference between these top choices. 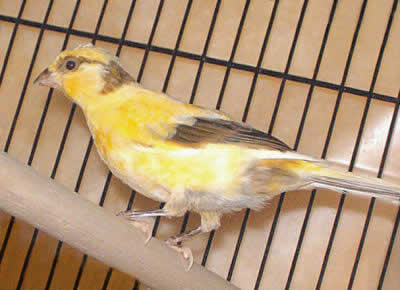 The American Singer is one of the top song canaries you can raise. It loves to sing – and it’s quite skilled at it, too!

These birds are interactive and melodic, making them the perfect choice for any family, especially those with young children who enjoy being entertained.

They can be found in all colors, including white, green, blue, yellow, and more. 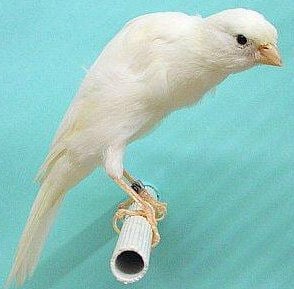 The Belgian Fancy canary was the first of all canary types to be bred specifically for its looks instead of its song.

It is round-shouldered with a vulture-like posture.

Though originally one of the tiniest canary varieties, it has now been beaten by other birds who crushed that record.

It has been used to develop a medley of other popular birds, including the Yorkshire, the Japanese Hoso, the Muenchener, and more. 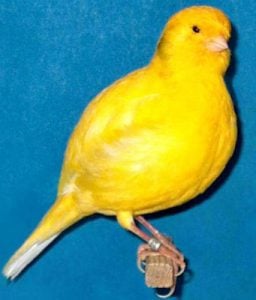 The Border Canary, also known as the Border Fancy, is named for its origins in the border region between Scotland and England.

It was first bred in the early 1800s and was originally known as the Wee Gem.

Ironically, despite this name, the “Wee Gem” ultimately gained recognition as one of the largest canary varieties out there!

Most Borders are yellow, but there are now other color combinations available as well. These birds have silky smooth feathers and a plump, rounded body that is somewhat egg-shaped. 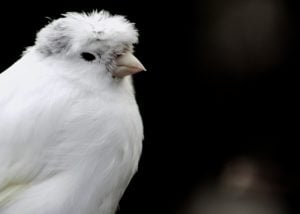 They first bred the Crested Canary from the Lancashire and Norwich breeds. The Crested has a crest upon its head, as the name implies.

It is somewhat rare and difficult to find and averages close to seven inches in length.

You might see a bird sold as a domestic canary – don’t worry, that doesn’t mean that you can’t keep these other types of canaries in your house!

Domestic canary birds are just canaries. They are domesticated versions of wild canaries and native to the Macaronesian Islands.

The Domestic Canary are fashionable pet birds that were originally bred and raised in England and Spain. They come in all shapes, sizes, and colors, including red, brown, white, black, orange, yellow, and more.

The Eumo canary is a color pigmentation that lacks brown pigment. It is a light-colored canary that is sometimes regarded as an albino, but it doesn’t technically exhibit the albinism mutation. 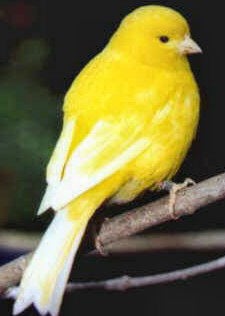 The Fife Fancy is simply a miniature version of the Border Canary.

It was first bred for its pint-sized cuteness in the mid-20th century and originated from Fife in Scotland.

At just four and a half inches long, this is the smallest canary variety you can buy. 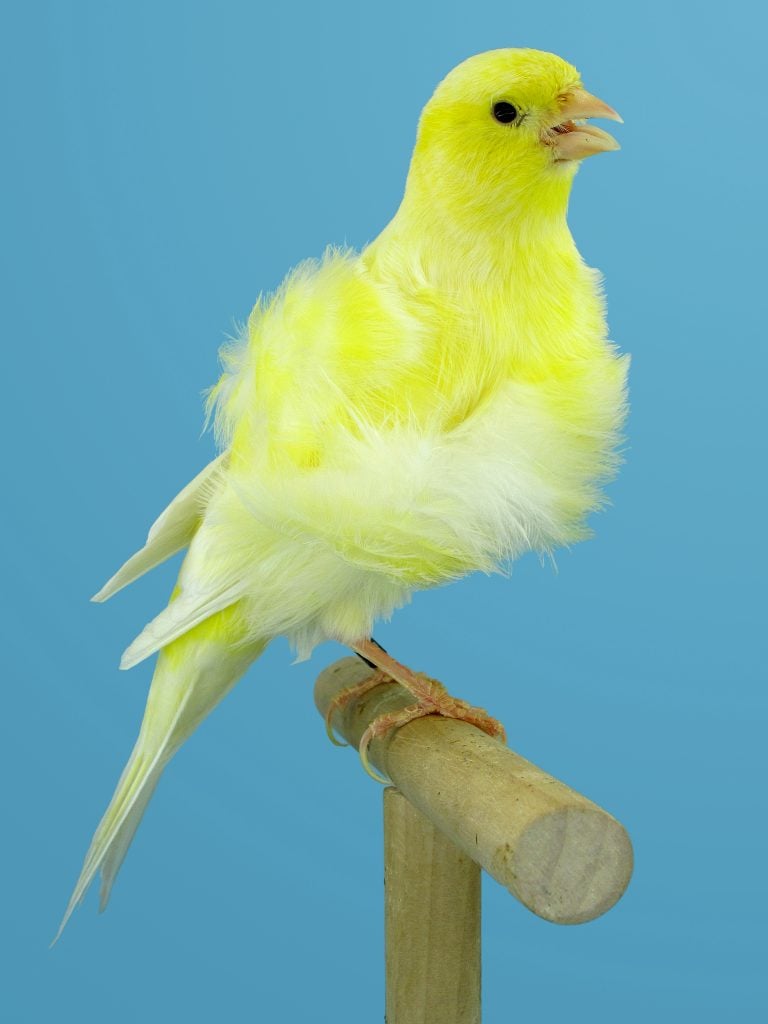 The Frilled Canary is named for its unique feather pattern. The feathers are mutated and stand on end, making the bird look like it just made it through a blustery hurricane.

These feathers curl inward, outward, and upward (anywhere but laying down and flat!).

It is affected in almost all body areas, including the chest, flanks, and back. 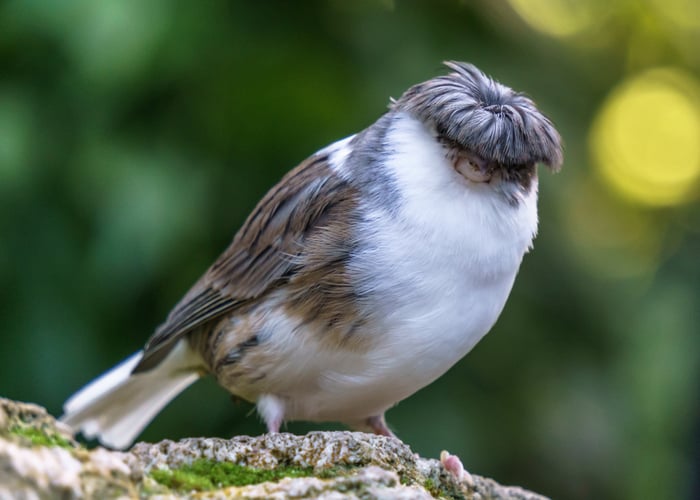 It’s been around for quite some time, having been first bred in the late 19th century. Today, it is quite a popular show bird.

It became more popular in the 1960s as the Beatles’ band rose in popularity- that’s because this bird’s unique feather arrangement made it look a bit like an avian Beatle!

Short and squat, it measures less than five inches long. 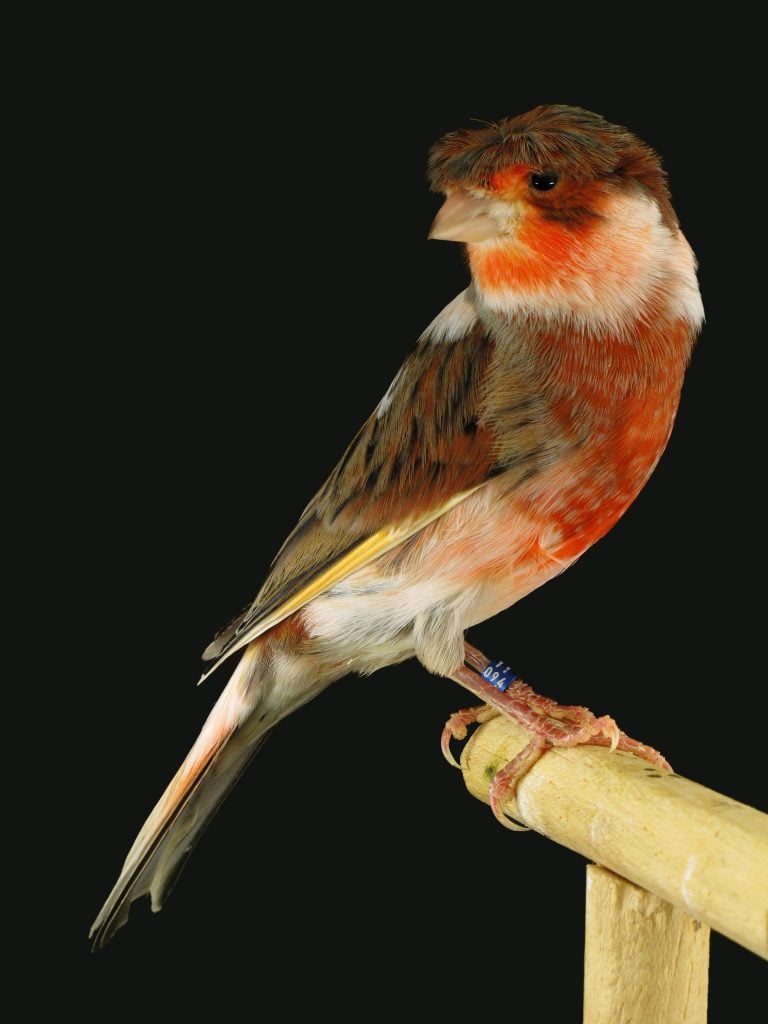 The Harlequin Portuguese Canary is a straight-backed bird with a military-esque stance. It is round-chested with both non-crested and crested varieties available.

This bird is a small, erect canary that only measures four to five inches from tail to beak.

It is also quite slender, lacking the trademark plumpness that is often seen in smaller canary varieties.

Jasper canaries are some of the newest additions to the canary family – they were bred within the last decade.

They tend to have pastel or otherwise diluted colors and are products of a single dominant gene. Jaspe birds, when bred to other Jaspe birds, will always produce Jaspers.

The product of crossbreeding with three species of wild birds, it is now a self-perpetuating breed on its own. 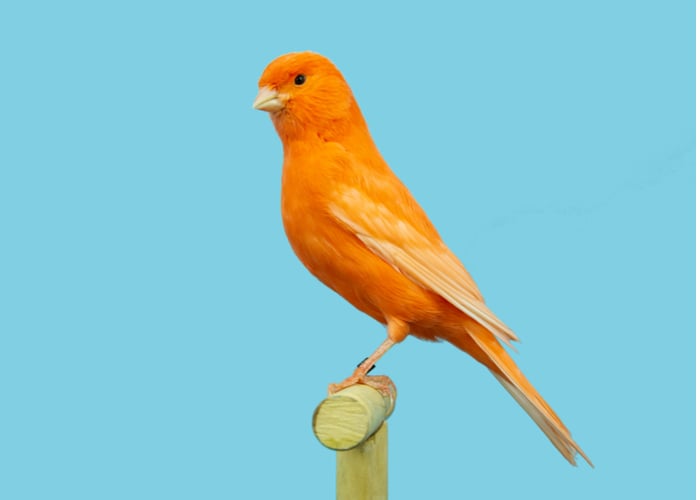 Lancashire canaries are also known as Manchester Fancy or Manchester Copy canaries. They are thin, tall, and crested, with each bird measuring up to nine inches tall!

These animals were first developed in the early 19th century and sometimes are used to add size to late varieties of other breeds. 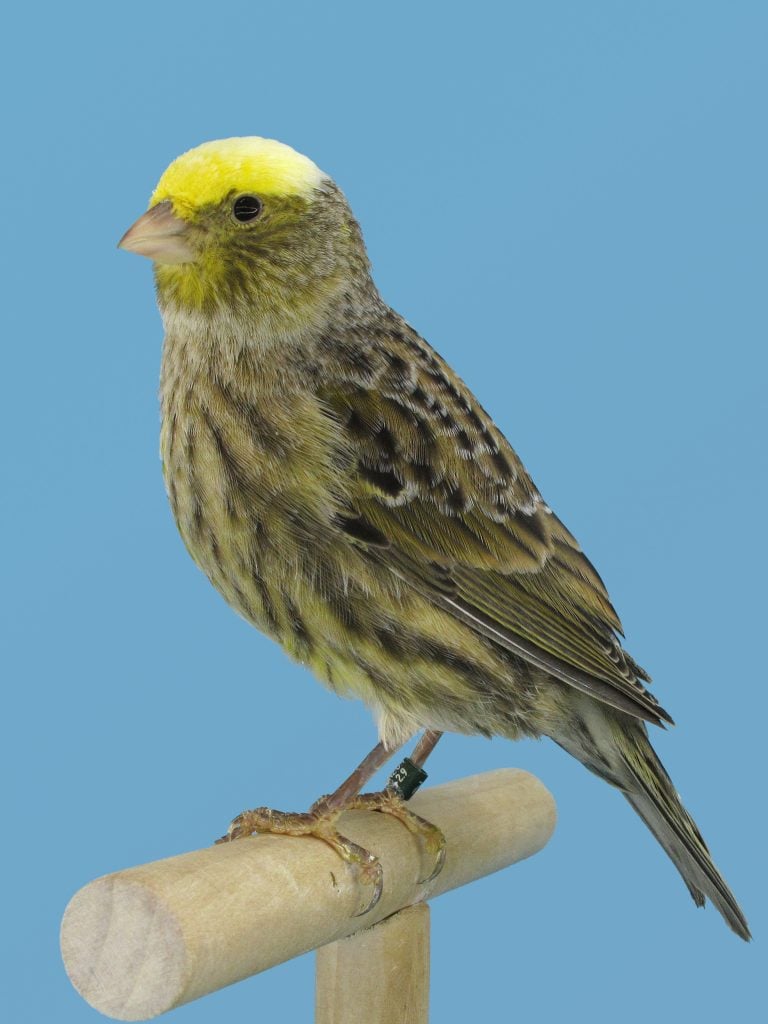 It’s not a hybrid of a lizard and a bird – but it might as well be, for its appearance is highly unusual.

This bird was named for its black crescent shapes on the breast and back. This feathered pattern looks much like the scaly skin of a reptile.

It has an eye-catching effect known as spangling, along with a thick cap of feathers on its head.

Unfortunately, the scaly pattern of these birds’ feathers tends to get less pronounced, with each molt eventually disappearing entirely. 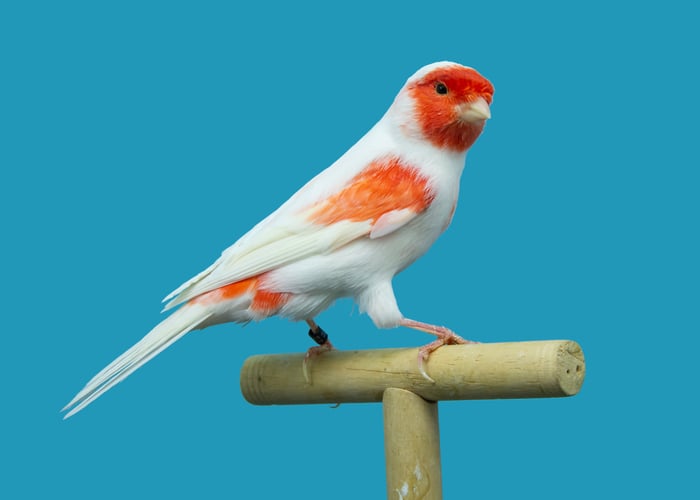 Like the Eumo, Mosaic is a color variation in canaries and is often regarded as its own breed.

You can find mosaic canaries in all colors, including red, yellow, red-brown, and yellow-opal.

This is one of the most beautiful companion canaries bred for color variations. They do well by themselves or when raised with other types of canaries.

The Norwich Canary has a reputation for being the original “mop-top.” It was combined with crested Lancashires to produce the Crested and was first brought to the country by Flemish immigrants.

A larger than average canary variety, this bird has bulky and fluffy head feathers. 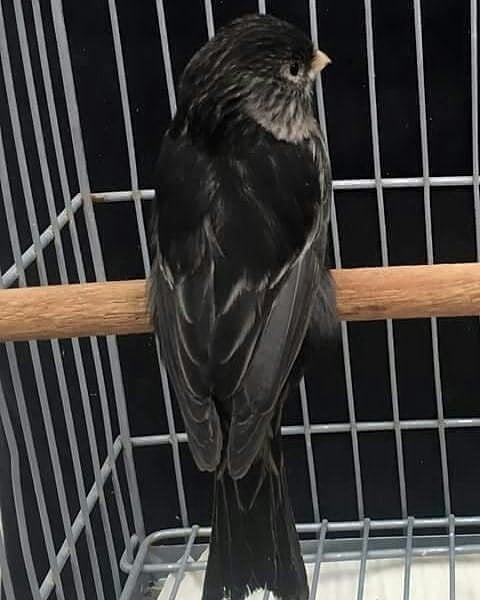 The Onyx canary is another color variation that is known for being very dark. It has lots of black pigmentation with no browns mixed in to lighten the effect. 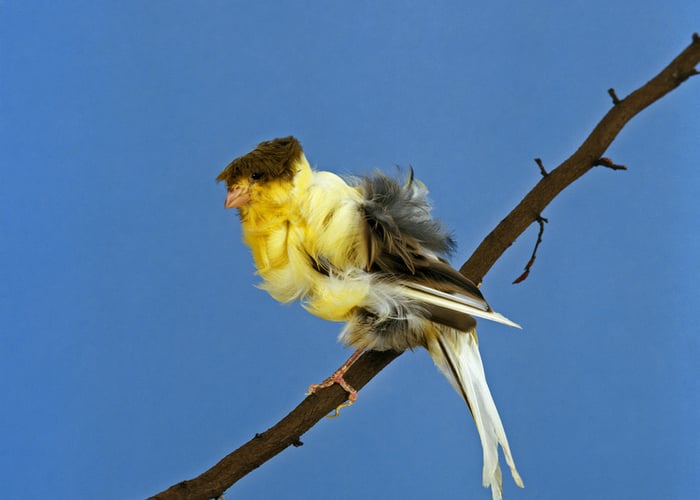 There are several types of frilled canaries you can raise, but the Parisian Frill is one of the most popular.

This bird has mutated feathers that make it look as though it just came through a windstorm.

As we mentioned in our description of the Frilled category of canaries above, its feathers curl inward, outward, and upward.

Parisian Frill canaries are derived from the Dutch Canaries and are some of the largest of all the Frills. They can grow as tall as eight inches! 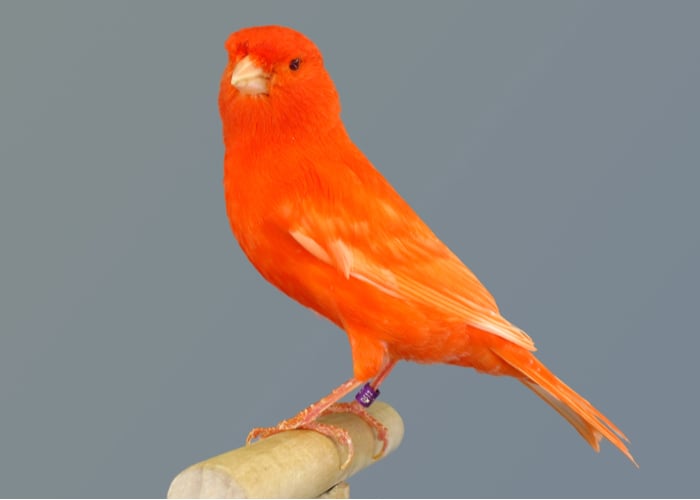 The Red Factor canary is one of the most popular show birds because of its gorgeous colors.

It is the red version of one other type of canary known as the Yellow Melanin Canary – except, of course, that its color is red instead of yellow!

Red is the base color and is accompanied by traces of dark pigmentation. 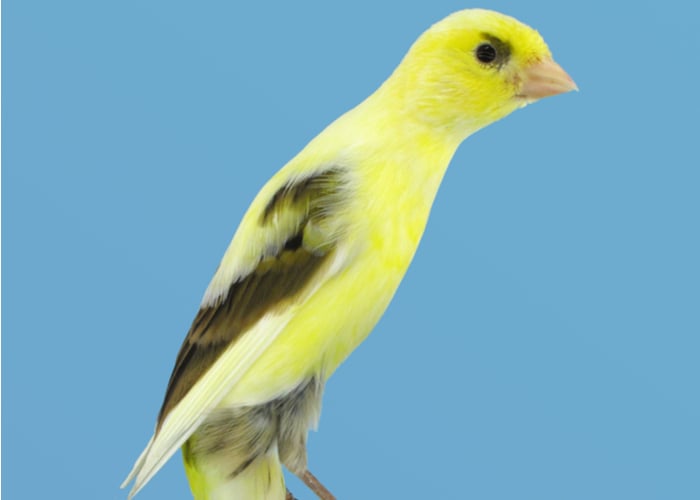 They were created to focus on the hunchback posture and developed in Glasgow and central lowland Scotland. 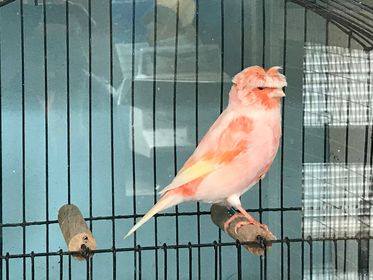 Stafford canaries are recent birds, first bred in Staffordshire in the 1980s. These canaries were bred in an attempt to create a small-crested bird with a red pigment.

Warwicks are new variations that only became accepted in the mid-2000s. A smaller bird has ivory to yellow coloration, a crest, and a unique egg-shaped body. 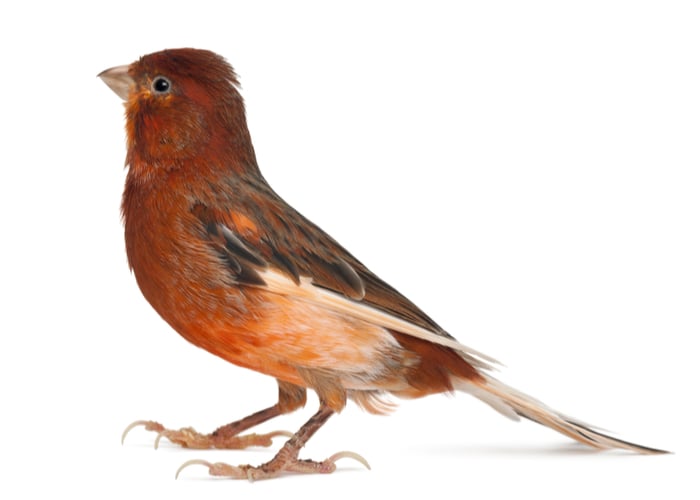 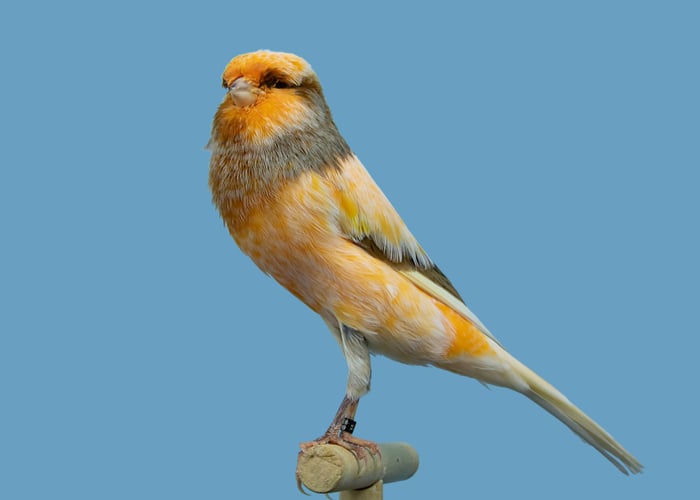 This bird is one of the most well-known canary varieties around. A larger bird is around six inches tall and has a unique no-neck look along with a rigid, upright stance.

It is this stance that earned the Yorkshire canary the nickname of “The Guardsman.”

The second-largest canary type out of the most popular canary varieties available, they first bred this one in the mid-1800s in England.

Don’t you think a canary bird is right for you? If so, there are several other options you might want to consider.

The finch is the most obvious choice because a canary is technically a finch!

The zebra finch is the bird that has the most in common with a regular canary.

You might also consider other small pet bird species such as a budgie, parrotlet, or cockatiel. All make great pets for first-time bird owners!

Otherwise, we hope this A-Z list of canary breeds has been helpful to you in your search for the perfect pet!

READ NEXT: The Ultimate Guide for Beginner Pet Bird Owners 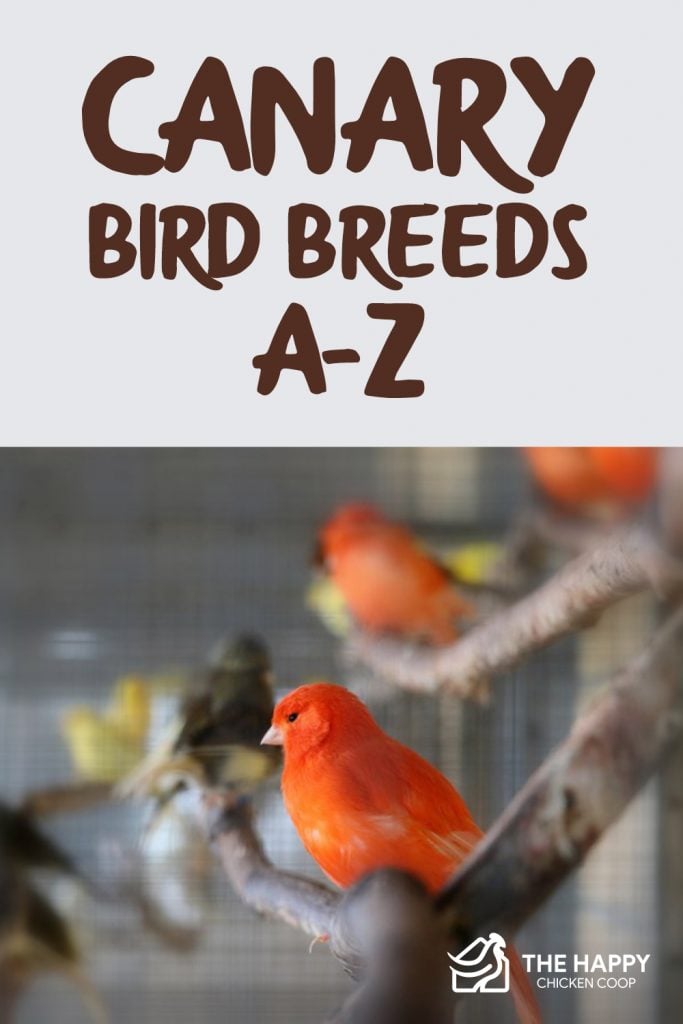