6 Ways to Deal With Extra Drakes 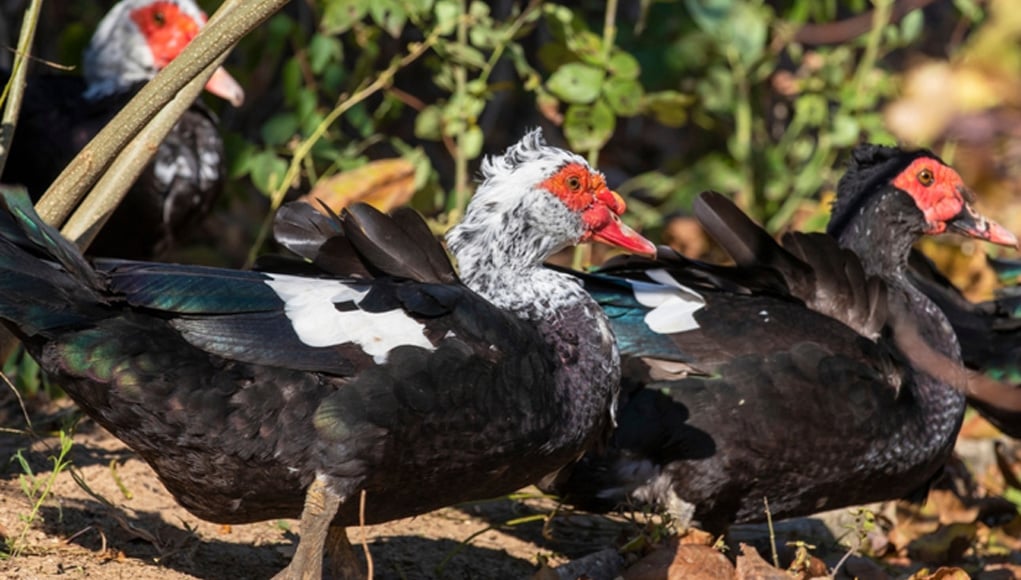 Do you have extra drakes in your flock?

Having too many male ducks can result in various fights and problems, but if you’re looking for ways to deal with extra drakes, you have come to the right place.

In this article, we’ll discuss the following:

Whether you’re raising your ducks as pets or for breeding purposes and egg production, this guide can help you make the right decision for your waterfowl. So, let’s dive right in!

6 Ways to Deal with Extra Drakes

Most duck owners encounter problems with excess drakes when the ducklings they bought turn out to be boys. And they didn’t notice it until the ducks had fully developed their plumage and became sexually mature.

But having too many male ducks can destroy your ideal drake-to-hen ratio.

So, you may wonder and ask, what do you do with too many male ducks?

Here are some options and ways to deal with the excess duck drakes.

If you’re raising your ducks for meat, it shouldn’t be hard for you to butcher their meat.

It provides many advantages because you raise the animal by yourself, so you know what they’ve eaten, unlike factory-farmed animals.

You can also be more self-sufficient since you’re producing your food. On top of that, you can reduce the drake problems and overpopulation.

In case you decide to keep your drakes for meat, here are some tips to ensure they grow healthy and faster:

Give them a feed with 20% protein

Feeding your duck drake with a protein level of 20% or higher can boost its growth and help it mature faster.

Ducks love to free-range, and it can help you to save some bucks since you’d spend less on feed when drakes can forage for their own food.

Wait for the right butchering age

The pin feathers that ducks grow in “waves” are exceedingly challenging to remove.

So it’s best to butcher within a period when there aren’t many pin feathers so that plucking is hassle-free for you.

Typically, these periods last for 7-8 weeks, 11–12 weeks, and 18 weeks or more. However, butchering is not an option for others who raised their waterfowl lovingly as pets.

So, if butchering the duck drake is out of the question for you, here’s an alternative way to deal with drakes.

Selling your extra drake is a good solution, but most prospective buyers want your drake to butcher them for meat.

If you raise your duck as a pet, it could be challenging to let go of him. Furthermore, drakes aren’t in demand in the market, so it cannot be easy to find buyers for them.

But some people are now interested in keeping ducks as pets, so there’s a chance you’ll find a suitable home for your extra drake.

If you want your drake to have a forever home, you have to sell it at a reasonable price.

This way, you can eliminate unwanted prospective buyers who are just interested in eating drake meat without paying much and not concerned about your pet duck’s well-being.

Others need a quality purebred drake for breeding, while others want drakes as pond ornaments or a means to control garden pests.

If they’re your target buyers, you can advertise your ducks on the following platforms to find them:

If it’s too hassle for you or you can’t find any suitable buyer for your waterfowl, here’s another way to deal with extra drakes.

If, by any chance, you have a friend or relative who is also interested in duck farming or keeping ducks as pets, then why not ask them to take your extra drake?

This way, you can rest assured that your drake duck is in good hands because you share the same passion or interest in waterfowl. On top of that, you can visit the drake from time to time.

4. Find a rescue center for drakes

This may not be easy but try to look for a rescue center or sanctuary that accepts drake ducks. Note that not all rescues and sanctuaries take ducks in.

But it’s worth trying. Search for “farm animal sanctuaries” or “waterfowl/ duck sanctuaries” near you to find the nearest options.

However, there’s an overabundance of duck drakes in many animal shelters. And sadly, it results in euthanasia.

But if you can’t find one, here’s one of the easiest ways to deal with extra drakes.

If you have the budget and a large space in your farm or backyard, then adding more females may be the most convenient solution.

Just balance the drake to hen ration, and you shall not have a problem with your extra drake.

The recommended drake-to-hen ratio is four female ducks for every drake.

So if you have two extra drakes, you need to add at least eight females, and if you have three males, you should add a total of four female ducks.

But that comes with huge additional expenses because more ducks mean more money spent on food, shelter, space, and other needs.

You can save a considerable amount in the feed if they can free-range, but you should provide more space to forage on.

If it’s not possible, here’s another tip on how to deal with extra drakes.

6. Put them in a separate bachelor group

If you want to keep your extra drakes, we recommend putting them in a separate all-male group and area where they can live peacefully and never meet the females.

However, some drakes don’t get along with each other even if they don’t have females they can fight over. They may fight excessively.

If that’s the case for your extra drakes, then it’s best to split them into groups or separate the aggressive ones.

And for instance, if you can’t attain the proper drake-to-hen ratio because you have two drakes and two hens, you can separate them during the breeding season or at night to give the girls a break.

This way, you can avoid overbreeding or exhausting the female ducks.

How to Know If You Should Reduce Your Drakes

As said earlier, the ideal drake-to-hen ratio is one male duck for at least 4 to 5 females. However, it’s not the only factor that indicates you have to reduce the number of drakes in the flock.

Some lighter breeds can have a ratio of 8 hens per drake. But it may depend on how the birds treat each other.

If you notice your females having:

That is a sign of too many mating attempts, and you need to rinse their neck to get rid of the males’ saliva because it can cause irritation.

That also indicates that you have too many drakes and must take precautionary measures. Otherwise, your hens will fall victim to drowning or more injuries due to overeating.

However, if only one hen shows signs of overmating, you need to separate her from the flock because she’s probably the drake’s favorite. And adding more females won’t solve the problem.

If your drakes are territorial and have sustained injuries from their violent fights or suffer from constant stress, you may need to reduce the number of drakes.

If reducing your drakes is not an option for you and you’re determined to keep them under your care, heed our tips below to manage them successfully.

How to Manage Multiple Drakes

Here are five helpful tips that can help keep your flock harmonious and peaceful despite having multiple drakes.

1. Make sure the hens are larger or equal to the drakes’ size

Give your hen an equal or smaller-sized drake so your female ducks can repel any unwanted attempts by the males.

Since most drakes are larger than hens, it may not be easy to find one that matches their size. But by doing that, you do your female ducks a favor by giving them the upper hand.

2. Don’t allow the drakes to fight over hens in water

Don’t let drakes fight over a hen while mating, especially on water.

The interfering drake frequently may vent its annoyance on the hen instead of attacking the other male.

And when two drakes are keeping the girl’s head underwater, a hen may not always be able to raise it to the surface.

So, you should intervene swiftly if a second drake swims over to disrupt a mating attempt between one drake and a hen.

A ten-foot extended pole can help you gently move an extra drake out of the way.

Before introducing more birds, carefully examine how many can fit comfortably in your pen and enclosures because crowded environments sometimes encourage misbehavior and territoriality.

Whenever feasible, introduce new ducks in the fall when the waterfowl’s hormone levels are at their lowest so you can have a peaceful flock.

However, not all ducks get along well, so you must watch out.

They may fight over the hens or you since they consider you a “hen”.

To protect the safety of flock members, monitor every introduction, especially when it is not during the fall or low hormone season.

We strongly advise you to watch carefully for any pecking order issues that develop at any time amongst any of the flock’s members.

Introducing a new member to the flock can change the dynamics of the birds. And it’s normal to see some squabbling as they reestablish and reaffirm pecking orders.

So you need to be patient with your waterfowl and monitor them closely.

Fighting is deemed “extreme” if it appears to be getting too rough (as shown by feather tufts on the ground or in a duck’s bill), too frequent, or does not end.

In this case, you need to intervene and separate them to avoid further injuries.

Here are the answers to other common questions about ducks that will help you gain more insights into drakes.

Will twp drakes get along?

Two or more drakes can get along and live happily if there are enough females.

But you may face some problems during the breeding season, where they can get aggressive due to hormonal changes.

How do you stop two drakes fighting?

To stop fighting among your drakes, you need to separate them from one another and divide the hens between them.

Ducks tend to be aggressive to their humans as well, so you need to take precautions since fighting ducks may bite you.

How many ducks are too many?

Five or six female ducks and one drake are enough if you want to keep and raise them for breeding purposes or supply your family’s needs.

What happens if you have too many drakes?

Having too many drakes can result in problems and even fatalities, especially if they’re aggressive and rough towards the females.

They may fight against each other or over the hens.

Other owners dump their duck drakes at local ponds or lakes. But that’s too cruel and irresponsible because many of them won’t be able to survive.

Most of the domesticated drake ducks didn’t have the skill to look for their own food because they were used to getting fed by their owners. So, they starve and die.

Other waterfowl, on the other hand, were eaten by predators while others were run over by cars. So, don’t simply dump your waterfowl.

There are better ways to deal with extra drakes than that.

READ NEXT: Why Do Ducks Bite? Everything You Need to Know