7 Things You Must Prepare Before Your Chicks Arrive 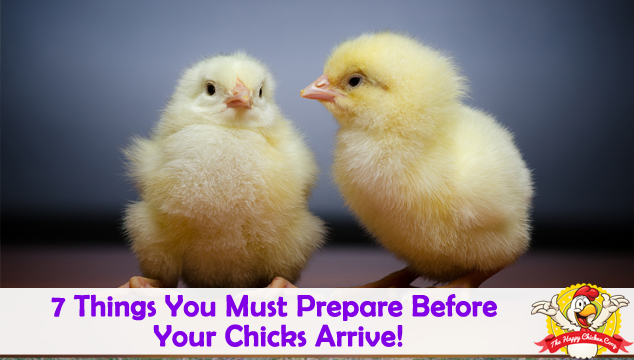 The time is approaching- your chicks are going to be delivered soon, but are you totally prepared?
It may seem like you have everything, but if it’s your first time there’s a good chance you may have missed something.
You don’t want to be running round like a headless chicken when they arrive, so it’s best to double check everything now.
We have compiled a check list for you of the 7 most important things you will need to have to ensure a good start for your little fuzzies!

A brooder box is an absolute necessity. No matter what size your new additions are- chicks or pullets, they need their own secure space.
They need to be isolated from your other birds to prevent possible cross infection. The quarantine period should be no less than two weeks– minimum!

The longer the better, but anything over a month is too much.
It is also for their safety- chicks need to be at least 2/3 the size of adults before they are mixed in with the big girls otherwise they may be severely picked on. The only exception would be chicks raised by a Momma Hen who is already a flock member. She will protect her babies.
They need to be safe from predators (think dogs or house cats). The box or container needs to be large enough to comfortably hold the chicks and their food and water. A plastic tote bin with secure lid is ideal.
A cardboard box or similar is also fine as long as it is secure.
If you are brooding outside of the house, in a barn or outbuilding for instance- the brooder needs to be strong enough to withstand predators such as raccoons, mink and foxes.

Bedding for chicks needs to be absorbent- they poop a lot!
It needs to be easy to clean up for you since you will be doing housekeeping at least twice a day to start.
Pine shavings are relatively cheap and easy to find in the farm stores. They also have the benefit of a bit of traction for the chicks and they smell nice. Chopped straw is also good for chicks.
I tend to lay down a piece of burlap under the shaving for the first few days, as the smooth plastic surfaces can be ‘slippy’ for them- so giving the chicks something to grip on reduces the possibility of ‘spraddle leg’ or injury to very delicate ligaments and tendons.

A heat source is vitally important. Without heat your chicks will likely die.
Until they are fully feathered out, they need supplementary heat. There are several kinds of heat source available to you. 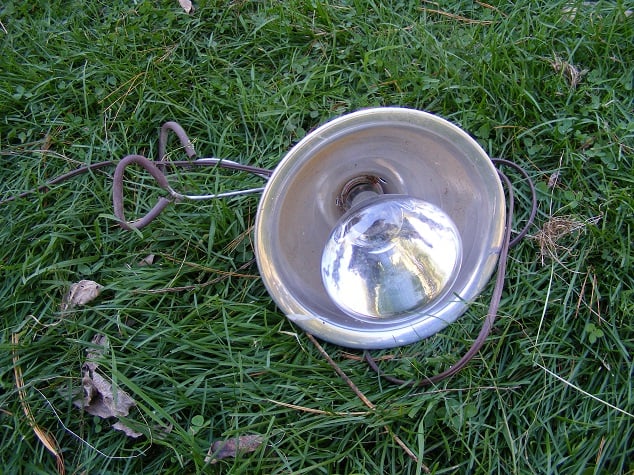 The old fashioned heat lamp is still very popular because it is cheap and easy to set up. However, you need to be extremely watchful and aware of the possibility of fire. Should your lamp come into contact with something flammable it takes less than 2 minutes to start a fire. Many people have lost not only their chicks but barns and homes too.
There are a couple of companies that have come out with a heating plate which is raised so the chicks can huddle underneath- much like Mama Hen. They are not inexpensive, but worth the cost from a safety point of view.
Always have a secondary heat source ready in case your current one burns out. There is nothing more devastating than a clutch of chicks chilled to the bone. A chilled chick can easily die without heat. So you don’t want to be caught without a backup plan.
You’ll also need a thermometer to ensure that you aren’t over or underheating your baby chicks. You can place the thermometer on the floor of your brooder box, at the hottest point (or directly under the heat source).

The essence of life!
All creatures need water to survive, chicks are no different. Initially they are clumsy little things, they can upturn waterers, fall in and drown if it’s too deep and of course, poop in it!
Your waterer should be sturdy enough to withstand some abuse. My chick waterer is a quart glass Mason jar with a plastic dish attached. I also put pebbles into the dish so the water is not deep enough to drown in.
You will need to change out the water frequently since the chicks don’t seem to care where they poop. Always wash and rinse the dish each time and the container daily- even if it doesn’t look too dirty.
The reason for such cleanliness is twofold.

I have read that chicken nipple waterers are suitable for chicks to use and I will be trying this out shortly. However, I would still keep a small regular type of waterer in the brooder for a few days just to be sure.

Chicks need a special formula called chick starter. It is high in protein and contains all the nutritional needs of the bird until 6 weeks of age.
You can buy medicated or un-medicated feed for your chicks.
Medicated feed contains a coccidiostat to help the chick develop resistance to coccidiosis. If you have chickens already, medicated feed is definitely worth thinking about since chicks are highly susceptible to coccidiosis and it can spread from older birds to younger birds. 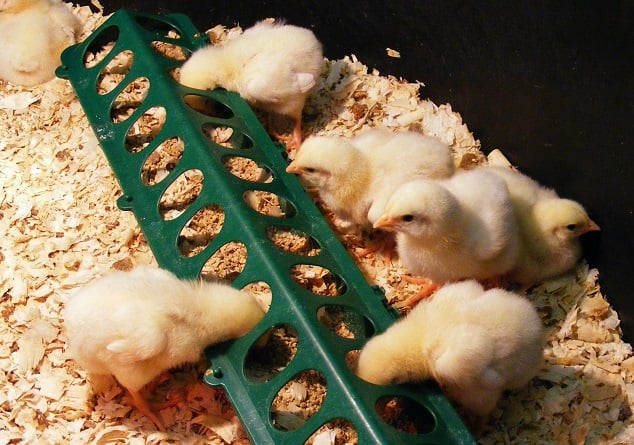 The feeder itself can be a gravity feeder similar to the drinker principle, or a trough feeder.
I prefer troughs because it’s larger and everyone gets to eat, but it does have its’ drawbacks. There are always one or two chicks that will stand on the feeder and poop- this is quite wasteful of feed. You will need to make sure you clean out the feeder daily.
Note: chicks need grit to aid in the digestion of their food. Chick grit is much smaller than regular chicken grit. You will only need the grit if you are going to be feeding veggies or fruit in addition to the regular chick feed.

There are several different brands out there, but they essentially all do the same thing- give the chicks a boost right at the beginning.
Just add to the water following the instructions when your chicks arrive home.
It’s also useful to have around just in case one of your birds looks poorly or isn’t thriving like the rest.
The probiotic helps with digestive health in the chicks and the electrolyte solution ensures they get the correct balance of necessary trace elements to start out life.

You should have one already for your older birds, but in case you’re new to all this, here’s what your ‘chick’ box should contain:

*Spraddle or splayed leg is caused by the chick trying to walk on smooth surfaces such as plastic or cardboard. Easily prevented by using paper towels, burlap or similar under the shavings for the first week or so. Once the leg muscles are strong enough, the burlap can be removed.
There are many other things that will eventually go into your kit, but this will do for starters.

If you’ve never raised chicks before, you might be surprised to learn that they can become “backed-up” when their droppings clog up their bottom, preventing them from defecating.
This is a serious problem and can cause death if not treated immediately.
Using warm water, paper towels, and gently removing the blockage works well, but it takes patience. When one of your chicks gets pasty butt (it’s bound to happen), you have to take your time moistening the droppings and slowly removing them.
Never rip the plug off as it can cause pain and bleeding (internally and externally).
In severe cases, be prepared to hold your chick in warm water to soften the blockage.

You are now officially ready for your chicks! Enjoy the little creatures and take lots of pictures because they grow very quickly.
I can promise you with a few weeks they will be outside with the big girls and look nothing like chicks!
If you give them a great start in life, they will reward you with lots of nutritious eggs, laughter as you watch their antics and free psychotherapy! Who could want for more?
Make sure you have all of the items on the list so you’re ready for anything when your chicks arrive.
Is there anything else you think we’ve missed off the list? Let us know what you need for your chicks in the comments below!
Read How I Use Herbs in My Coop and Why You Should Too