10 Cheapest Pet Birds – The Most Affordable Options for Beginners 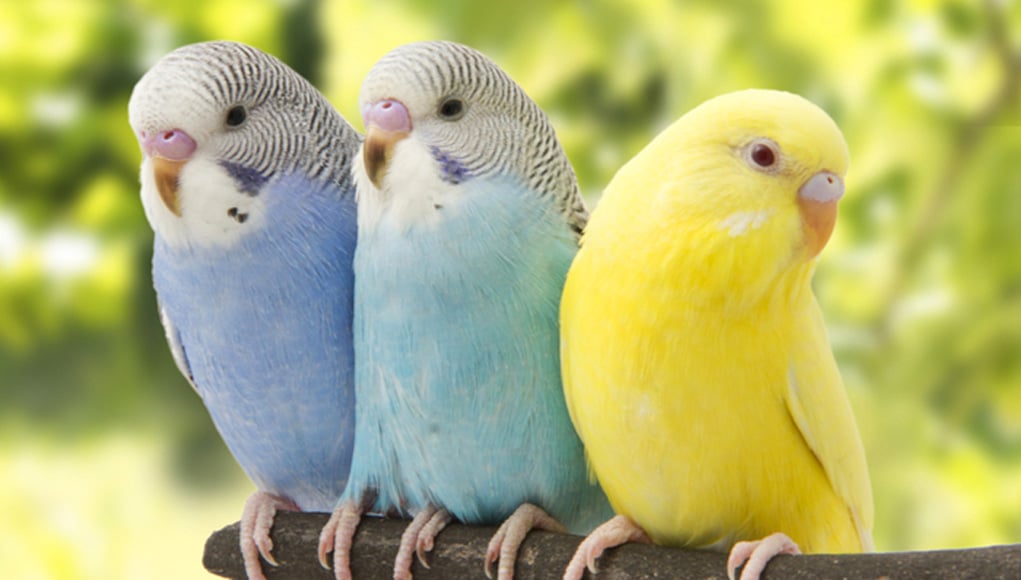 Are you looking for the cheapest pet birds for novice bird owners? If you’re a newbie in the avian community and searching for budget-friendly options, don’t worry! We got your back!

We compiled 10 of the cheapest birds to help you find the right feathery companion.

Are you ready to discover the most budget-friendly birds that won’t break the bank? Then, let’s dive right into it!

Here are some of the most affordable pet birds, their features, and their pros and cons. 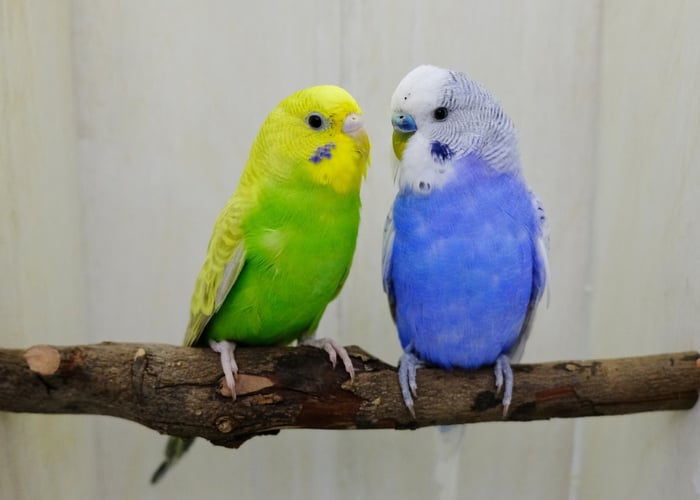 We’re kicking off this cheapest pet bird list with the tiny but mighty Budgerigars.

It’s hard not to love these birds because they’re super friendly, easy to care for, and gentle. Not to mention their striking feather patterns.

These cheap birds are a force to reckon with because aside from their beauty, they also have brains!

Budgerigars are intelligent, and to prove that, a Budgie named “Puck” won the Guinness world record for the most extensive bird vocabulary.

He could speak 1,728 words, and although he passed away in 1994, his legacy was a revelation and proof of Budgerigar’s remarkable intellect.

They’re tiny, so they’ll do well in a small cage(although they’d love to have a larger one) and consume less food.

So, Budgerigars is jam-packed with almost all the features you could ever want in a bird as a starter. With Budgies, you can have a bird with beauty, brains, excellent talking abilities, and docile nature at a low price.

You’ll never go wrong with the Budgerigars if you choose wisely from a reputable breeder. 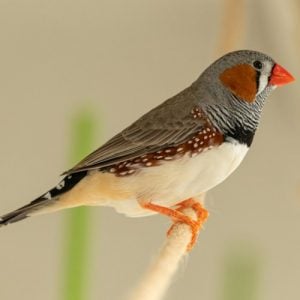 Now, we’re down to the second cheapest pet bird; the finches. There are 17 North American finches, but the most popular are Zebra and owl finches.

But finches prefer to socialize with other finches over their humans. So, they’re better kept in pairs.

They’re unsuitable if you want hands-on experience and love petting your bird. But the advantage is they don’t need much handling and out-of-cage playtime.

All you need to do is feed, water, clean them up, and enjoy their comical antics and quiet chirps. 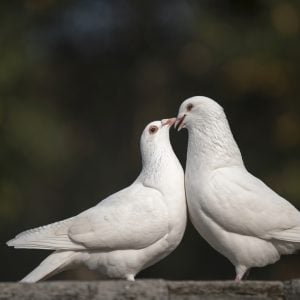 These popular birds are everywhere in the world, except in the Saharan desert and Antarctica. They’re present in cities and countries, so it’s easy to see why they’re one of the cheapest birds to buy.

However, medium-sized doves make great pets due to their gentle nature, quietness, and soothing vocalizations.

They do well in apartment environments, but they still need plenty of attention and human interaction.

Furthermore, you must ensure they can have a healthy diet, a few hours of exercise out of their cage, and access to UV light to thrive.

Doves are easy to train and bond with but also need companion birds. 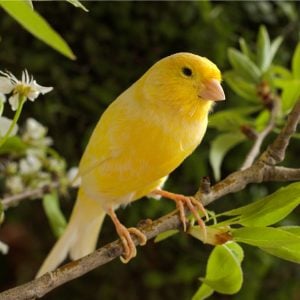 These little charmers with soft yellow feathering are famous among avian enthusiasts, but they’re also budget-friendly pet birds. They have a cheerful personality and offer their owners melodious songs that soothe the soul.

They’re tiny, but they have a big personality and innate intelligence.

The canaries are solitary birds, so they can thrive even without companions if you give them enough attention. But they can still co-exist with other birds.

However, putting two male canaries together is a big NO because they’ll fight.

There’s a total of 395 canary species. So, you have a wide array of choices, including the following:

If you want a cheap pet bird with splendid singing prowess, look no further than male canaries.

Male canaries are better at singing because they can develop elaborate songs, while the females can only vocalize with chirps. 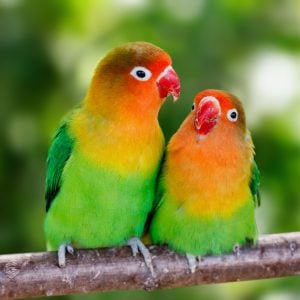 Lovebirds are popular pet birds with active, feisty, and playful nature. They form strong bonds with their owners and fellow avians.

However, these tiny birds can be territorial and aggressive if not properly tamed at a young age. According to some experts, females tend to be more jealous and territorial.

They also produce loud and high-pitched screech when seeking your attention, but not as loud as larger parrots.

There are nine types of lovebirds, but the most commonly kept as pets are the following:

They’re charming and loving, which is why they’re among the favorite pet birds in the avian world. 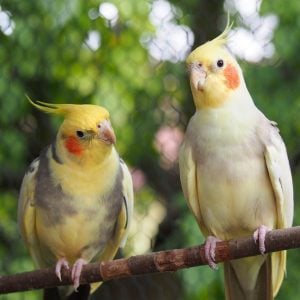 These cheap birds are also intelligent and can pick up a few words like “hello”, pretty bird, “I’m a good bird” etc. But their vocabulary isn’t as extensive as other parrots like African greys and Budgies.

Cockatiels can also whistle and vocalize but not as loud as other parrots. Female cockatiels are good at mimicry too!

These birds can imitate the sound of alarm clocks, phones, and wild birds outside.

They’re not fond of cuddling, but some cockatiels enjoy spending hours on their human’s shoulder.

Cockatiels also love to dance and greet anyone who comes near. 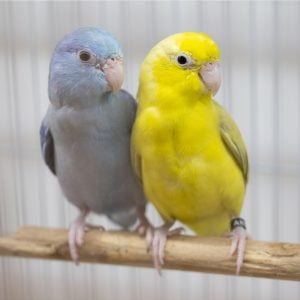 Large parrots’ price tag can be hefty. So, if you want tiny, cheap friendly birds as free-spirited as their larger counterparts, check out the parrotlets.

They’re the smallest parrots; that’s why they earned the nickname “pocket parrots”.

There are tons of parrotlets, but the most remarkable are:

Parrotlets are adventurous but loyal and affectionate. They love interacting with their humans and being part of their everyday lives. However, they can be highly territorial and aggressive, especially when threatened.

They can be choosy in who to interact with, so don’t be upset if you’re not their favorite family member.

But parrotlets bond well with fellow parrotlets and prefer their own kind. 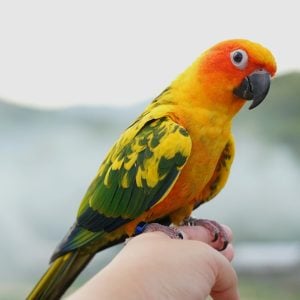 Conures, the most colorful parrots in this cheap birds list, can range up to $600. But that’s justifiable because some are medium-sized, and these birds are a pure visual treat!

It’s hard not to fall head over heels for this beautiful species, but they’re more than just their physical appearance.

Conures are friendly and curious birds with the ability to speak a few words and say their own name.

They’re playful birds who can learn different tricks like rolling over and standing on one foot.

But they tend to be noisy and messy. They will growl, chatter or screech when craving attention.

If you’re planning to raise a Conure, get ready for their funny antics, like mimicking other birds or dogs barking. 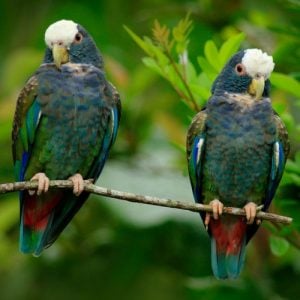 They have a reputation for being independent but, at the same time, devoted to their owners.

They enjoyed great popularity recently and continue to charm many avian enthusiasts worldwide.

But they’re not the most popular parrots because they’re often out-talked and out-flashed by other species. But that’s what makes them unique.

They aren’t the best talkers, and their voice isn’t always crystal clear, but they can build quite an impressive word bank.

Pionus Parrots fit apartment living, but a household full of barking dogs, screaming children, and other noise can teach them to be noisy. 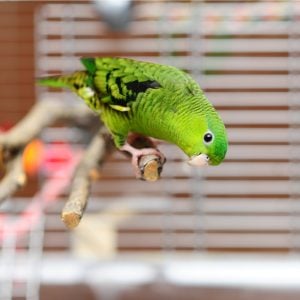 Now we’re down to the final bird in our list of cheapest pet birds.

These cheap birds are named Lineolated or barred parakeet or Linnies because of their fine lines or barred markings.

Lineolated parakeets are often confused with budgies, but they’re stockier and like to walk and perch with their bodies nearly parallel or horizontal to the ground.

Budgerigars, on the other hand, sit or stand upright.

Linnies can be charming and even-tempered if hand-fed as babies. They’re friendly and enjoy sitting on their owners.

These parakeets are also highly entertaining, not just because they’re comical, but they can also talk and whistle. They can enunciate words even though they have a limited vocabulary. 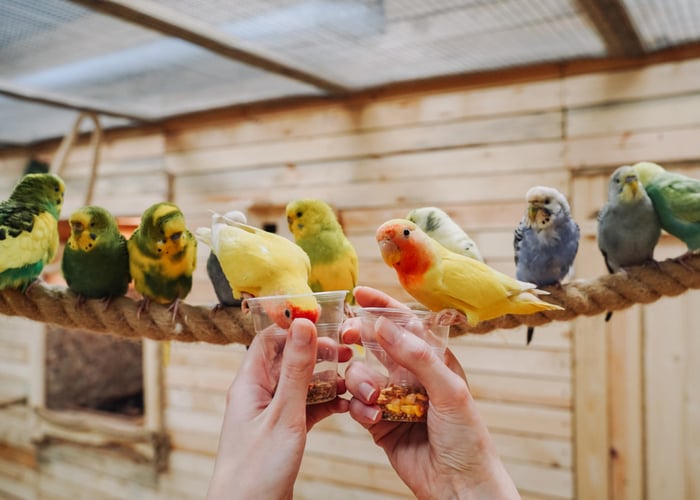 What is the cheapest talking pet bird?

The Budgie is the cheapest talking parrot worldwide. These birds may be minuscule, but Budgies have excellent talking skills, intelligent minds, amiable personalities, and beautiful feathering.

Yes! You can have all of that in a small package at and low price!

What is the easiest pet bird to keep?

The cheapest pet bird on our list is also the easiest to keep because Budgies are low-maintenance and require less feed.

Even if they can be prone to several avian diseases (like other birds) and be slightly destructive, a healthy diet and training can eliminate those cons.

What is the cheapest conure?

The Green-cheeked conures are the cheapest of their kind, with a price ranging from $120 to as high as $600. 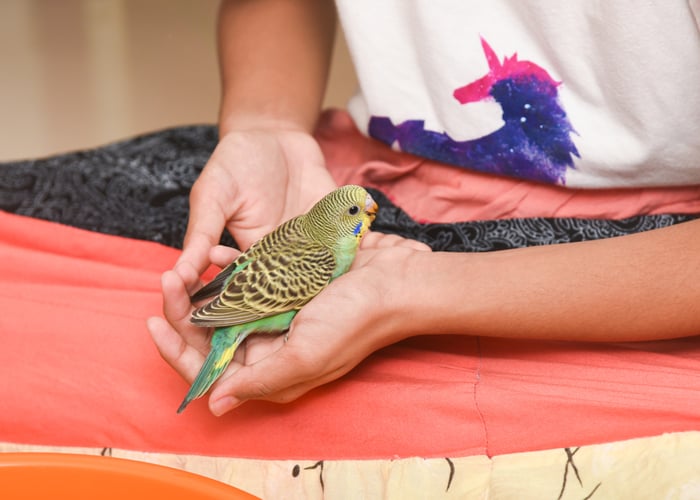 So, those are the cheapest pet birds you’ll ever find in the market!

Which among those avian creatures is your favorite?

This may sound biased. But of all birds on the list, Budgerigars are the best talkers, and they got everything you could ever ask for in a pet because they’re visually pleasing and intelligent but friendly and sweet.

Cockatiels, Parrotlets, Conures, Pinus Parrots, and Lineolated Parakeets can also talk, but their word bank isn’t as extensive as budgies.

No wonder, Budgies are one of the most popular pet birds in America!

But that doesn’t mean that the non-talkers aren’t pleasing at all. Low-maintenance birds such as Finches, Canaries, and Lovebirds also have their own charming personality.

And they can also brighten up your home and vary when trained properly. So whichever bird you choose, keep in mind to provide them the care and love that they deserve.

READ NEXT: Top 10 Most Popular Pet Birds in the World