Do Ducks Need a Mate?—Everything You Need to Know 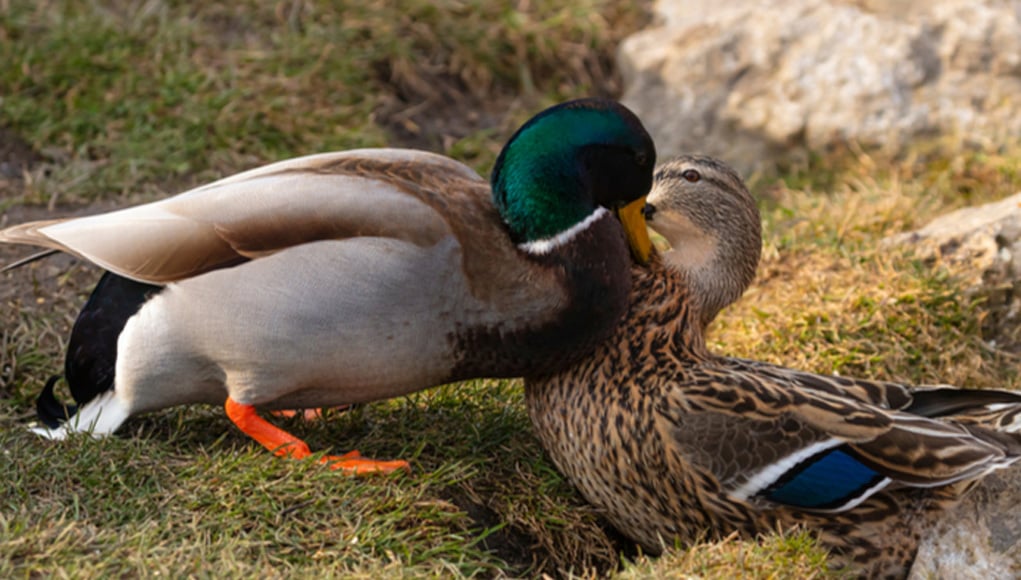 If you’re a newbie duck owner trying to figure out their mating and egg-laying process, you must be asking the same question, “do ducks need a mate”?

Waterfowls are social birds, but do they really need partners of the opposite sex?

In this article, we’ll discuss the following questions:

If you’re looking to add a mate for your current duck, this will help you make the right decision and give insight into how ducks reproduce.

So, without further ado, let’s answer the question.

Do Ducks Need a Mate?

To set the record straight, ducks don’t need a mate or companion of the opposite sex to be happy. In fact, female ducks can lay eggs even without the presence of a drake.

However, they can’t hatch the eggs or reproduce without the drakes. Therefore, they need a mate of the opposite sex to reproduce.

Females may be able to form an amorous bond with other girls and have female-on-female sexual interactions, but no fertilized eggs are produced from that interaction. 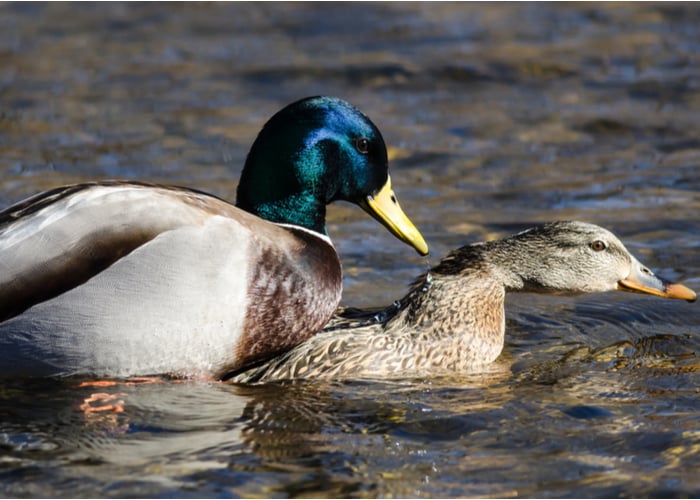 Do Ducks Mate for Life?

Most wild duck species are seasonal monogamists, meaning they choose a pair for a breeding season and pick a different mate the following year.

So, do ducks have the same mate for life? No.

Most dabbling, diving, and sea ducks switch partners with each new breeding season rather than reuniting or mating for life.

During courtship, breeding, and nesting, males and females create close ties, but female ducks are the ones who raise the ducklings alone.

While many males abandon the breeding grounds together, some drakes act as ferocious protectors of their mates when other males approach.

But they have no attachment to or responsibility for their offspring. Though there are a few exceptions, they are rare.

Re-pairing has been seen in a few species of ducks, whereby bonded males and females meet when they travel to their wintering grounds and then reconnect when they return to their spring breeding grounds.

This habit of returning to the same breeding and wintering ground yearly is called philopatry.

However, this duck behavior is not common in all species.

How Do Ducks Find a Mate?

The girls get to choose whoever they want to bond with for the season because there are more male ducks in the wild than females.

Males can choose the duck they want to impress, but the girls make the final decision.

But how do ducks pick a mate?

A female duck will typically choose the male who seems to be the healthiest and most capable of surviving.

They want a strong male to protect them from all the other single male ducks still wandering around looking for a mate.

If there are multiple male ducks living in the enclosure or on the land, domesticated ducks will also select their mate.

They act and attract mates similar to the wild drakes. But the domesticated male will probably bond with more than one female duck. 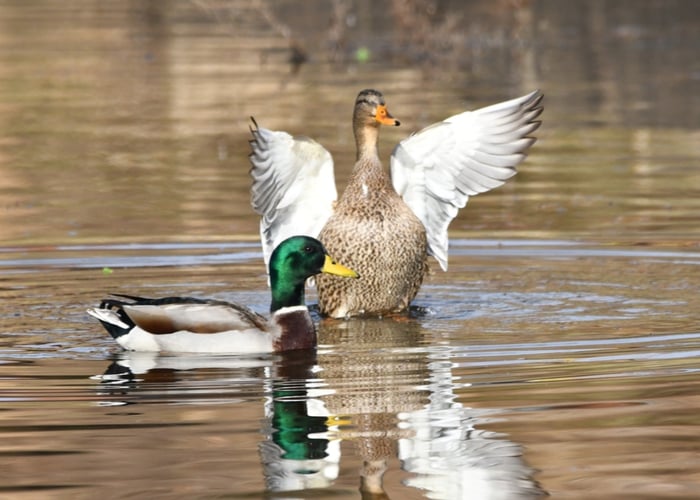 How Do Ducks Attract Mate?

When you notice the following acts, your ducks are ready to mate and try to attract the opposite sex.

This is the first step in duck courtship, where the ducks, both male and female, will be bobbing their heads up and down in close proximity to other ducks.

When drakes are in the water, they tilt their head toward the water and leave their rear into the air to show off their attractive secondary feathers that are usually hidden.

It’s another effective way to attract female ducks and to stand out in a crowd of males.

Aside from the tail-up method, males can also display their wing feathers to the females by flapping their wings and puffing out their chest.

A male may also bend his back while submerged, lift his head out of the water, and grunt after blowing a loud whistle.

Another male courting method or wooing trick involves swimming with the head and neck just above the water’s surface.

Males will engage in this behavior to entice females and as a type of happy dance right after mating.

Females also swim low to signal nearby males that they are interested in mating.

Only females engage in this mating posture, which comes right after the head-bob dance. A woman will stretch out her back and lengthen her neck to invite a drake to mount her and start the mating process.

Did you know that:

When you pet the ducks at the back of their head and neck, they may interpret it more romantically than you intended.

These are sexually sensitive spots for ducks. They may think of you as a potential mate when you touch these parts. 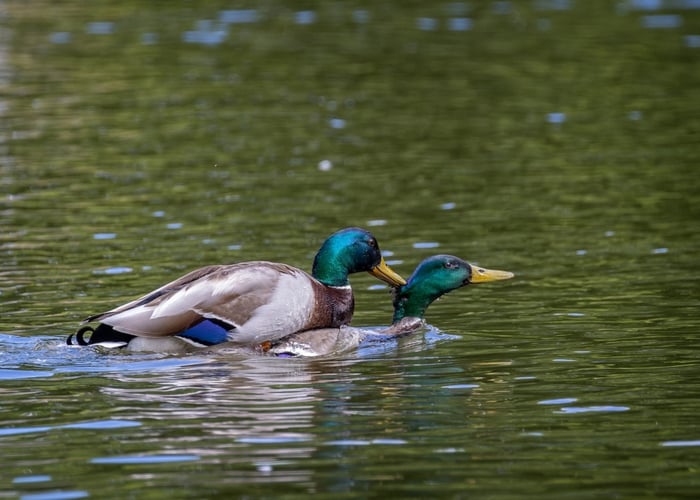 How Do Ducks Mate?

Now, let’s discuss how ducks mate. The copulation starts when the male mounts the female from behind, grips the girl’s neck feathers for stability using his beak and push her into the water, and starts thrusting.

The drakes have a phallus or penis that looks like a corkscrew and pink pasta noodles.

Beginner duck owners may mistake the ducks’ penis for intestines, but they actually use it to deliver sperm to the female’s vaginal canal. And if successful, the eggs will be fertilized in the next few weeks.

If the female is resisting, it may seem like a hurried, forceful process with a lot of quacking, flapping, and posturing.

But a female ready to mate will loosen up and lift her tail feathers.

The male leaps out of the water and makes a loud whistle sound during this split-second exhibition. Then there will be a quick, loud grunt after that.

Following successful copulation, the females make an “urh-urh-urh” sound while drakes whistle and grunt loudly. The male then dismounts and swims in a circle around his female mate to celebrate its victory.

Did you know that 97% of birds don’t have penis or phalluses and vaginal tracts? And among the 3%, only ducks have complicated organs, making them unique.

Researchers believe their strange reproductive system is due to evolution caused by the common aggression between drakes and females during mating.

Forced Copulation and Aggression During The Mating Process

Males become forceful and aggressive when they haven’t found a mate. Due to their desperation, they form groups of non-paired males and work together to pursue a female duck and force them to copulate.

That traumatizes female ducks as they often acquire injuries, and some even die.

Since ducks often mate in the water, drakes tend to drown the females trying to escape from the exertion.

Although forced copulation is not prevalent in birds except the waterfowls, it may be one of the reasons why ducks have a complicated reproductive system.

Females’ bodies have evolved to make forced penetration difficult to carry out because it is risky and traumatic for them.

The vaginal tract of the female duck is shaped like an anti-corkscrew, while the penis of a man is like a corkscrew.

So, it can be exceedingly challenging to breed with them because their organs do not easily fit together.

Also, if the female resists, it makes it harder for the drake to penetrate her. One-third of duck breeding events are forced. But thankfully, the females are rarely coerced into laying their attacker’s eggs.

She can position her body to block the aggressive drake from completely penetrating her vaginal tract.

Furthermore, the side sacs and pockets inside the female’s vaginal system serve as filters for undesirable sperm.

So, 9 out of 10 sperms brought by forced copulation are trapped in the sacs and eliminated from the female’s body.

Therefore, the eggs don’t get fertilized.

Since female ducks’ vaginal canals are difficult to penetrate, only the strongest and healthiest drakes with the largest phalluses can be able to mate with them.

When is Duck’s Breeding Season?

Wild ducks breed and reproduce during spring through early summer where there are:

These factors make it easier for ducks to hatch eggs and raise the ducklings successfully.

But domesticated ducks mate much longer. But by midwinter, they mate significantly less frequently or not at all, just like their wild predecessors.

A duck going through a molt will likewise stop attracting females.

What Happens When a Duck Loses Its Mate?

Early in the mating season, if a female duck’s mate passes away, she will swiftly find another drake. And they will continue breeding and nesting as usual.

In most duck species, especially mallards, there are more males than females. So, there’s no shortage of drakes ready to jump in if a girl unexpectedly finds herself alone.

There have been reports that domestic ducks, kept in cages together and watched in greater detail than their wild counterparts, lament the loss of a mate.

According to some experts, if the surviving duck witnesses the death, it might have a longer-term impact on how a duck may respond to the loss of a mate.

But others may be confused at the sudden disappearance of their partner. 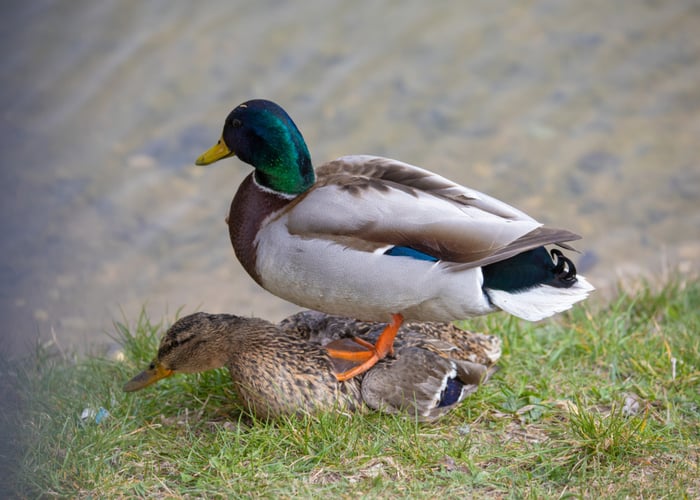 Can ducks reproduce without a male?

Female ducks don’t need drakes to lay eggs. But they won’t be fertilized and hatch into ducklings without a drake around.

Therefore, they can’t reproduce without a male.

Can a duck survive alone?

Ducks are social birds, so leaving them alone or caged for a long time is not emotionally healthy because they may feel lonely, isolated, or distressed like humans.

They need the company of other ducks to thrive and socialize with.

Can you keep just female ducks?

It’s possible to keep an all-female flock, and they’re generally more peaceful than having an all-male flock.

But if you want them to breed and reproduce, you need to add drakes with a ratio of 1 drake per 4 to 5 females.

Do ducks lay eggs without mating?

Yes, ducks can lay eggs without amorous attention and mating with the opposite sex.

But as said earlier, the eggs won’t hatch into ducklings without the drakes, responsible for the fertilization of the eggs in ducks.

Do ducks have one partner for life?

Drakes leave the females after the breeding season and finds another partner in the next season.

Do ducks get sad if their mate dies?

If a duck suddenly disappears, it may cause no grief to younger ducklings or siblings.

But it may vary depending on how deep their bond is with the deceased duck and if they’ve seen him dying.

Ducks with stronger bonds and who witnessed the deceased dying may suffer from the impact of the trauma and mourn.

How many mates do ducks have?

Ducks can be either monogamous or polygamous. Most domesticated ducks utilized for reproduction have more than one mate since the recommended drake-to-hen ratio is one drake per 4 to 5 hens. 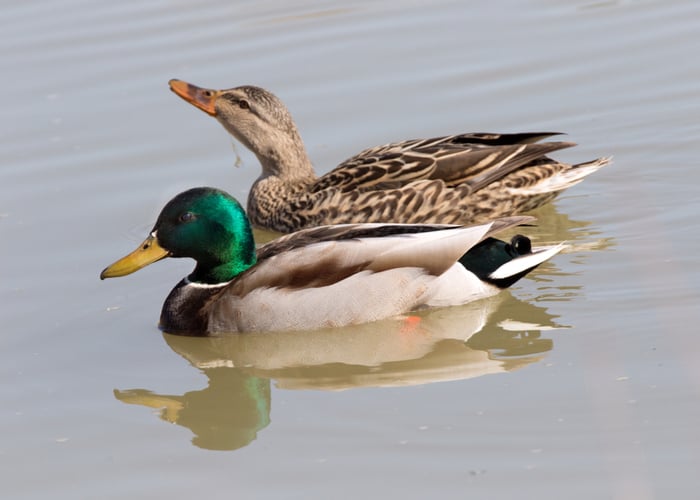 To sum it up, ducks don’t need a mate to lay eggs, but they do need a mate to fertilize the eggs and reproduce. A single duck can live alone and survive, but it’s best to provide a companion for your waterfowl.

Nothing compares to having a fellow waterfowl companion that they can play and bond with.

Having an all-female flock is fine if you’re raising ducks for eggs and don’t want them to reproduce.

But if ever you decide to breed your waterfowl, keep in mind the right drake-to-hen ratio which is 4 to 5 hens per drake. This way, you can prevent the zealous males from overmating the girls and keep your flock as peaceful as possible.

You also need to keep an eye on your mating ducks since aggressive ducks tend to force copulation on their favorite hen.

What if you have too many drakes in your flock, and they’re causing a lot of trouble to you? This next article will give you six helpful tips for handling extra drakes and managing multiple ducks.

READ NEXT: 6 Ways to Deal With Extra Drakes