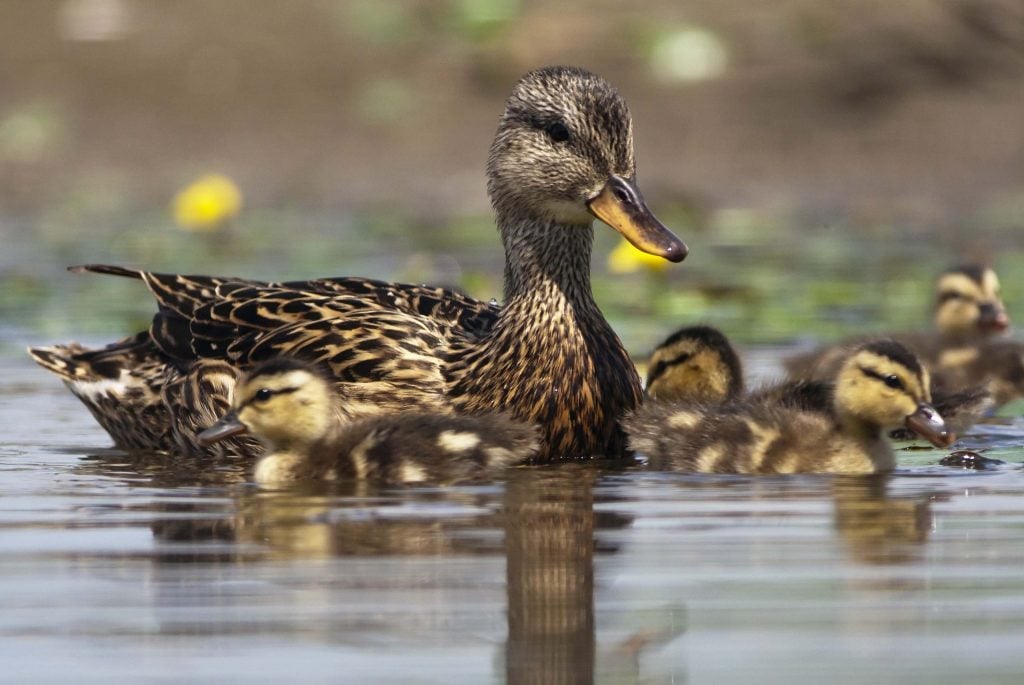 Ducks are quite entertaining little creatures. They each have their own definite personalities and flock demeanor. Being able to interpret duck behavior will allow you to better understand why they do what they do. It will also enhance your husbandry skills to offer better care – and perhaps even get more delicious eggs in the process.

Both domestic egg and meat duck breeds as well as their wild peers share the basic characteristics.

Whether you hatch your own ducks via their hen mommas, in an incubator, or purchased from a store, the fuzzy little ducklings will all instinctively behave the same right out of their eggshell.

The first hour of life is forever important to a duckling’s life. The tiny baby duck will imprint upon whatever it sees during this time. If the duckling was hatched in a clutch of eggs the momma hen was sitting, the duckling will naturally imprint upon her.

But, if the duckling was hatched in an incubator it will imprint upon the other ducklings or even chicks that are hatching along with it.

The more you look into the incubator, talk to and handle the ducklings, the greater the chance they will imprint upon and bond with you. While you want them to meld into a flock, the connection they make with their keeper will make them easier to handle if sick or injured.

When ducks imprint upon a keeper they will also be far more likely to come when called and be easier to train as part of the put up and turn out routine. After a duckling has imprinted upon you, it often carries on quite loudly if you disappear from view for too long. But, this behavior subsides once other ducklings or chicks also hatch to help keep it company. 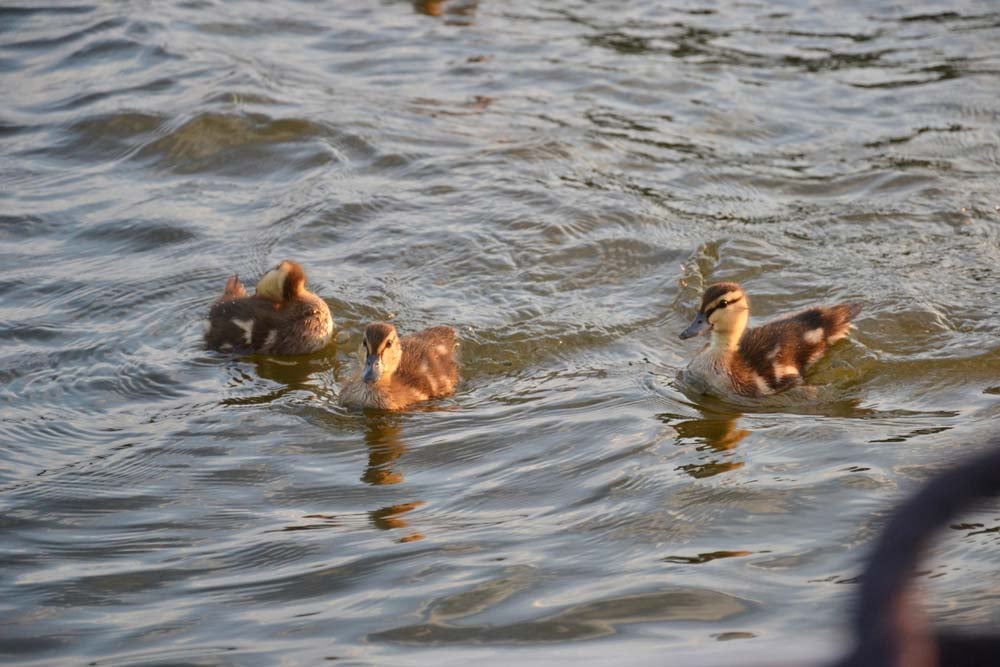 Each time I hatch a few ducklings to add to the flock the same thing occurs – a “flockette” is formed. While the ducklings truly become a part of the established flock, a sort of mini flock develops where the three or four ducklings that hatched together remain tight knit and always swim and lounge together for the rest of their lives.

As mentioned in a previous article, duck mating habits can help determine the sex of a duck. However, duck breeding behavior can look a bit violent. When I first started keeping ducks I thought that one was fighting the other and was about to drown.

Ducks engage in breeding behavior year round and can mate in or out of the water, but unmistakably prefer to get amorous in the water.

Flirting behavior is common in ducks. Drakes will shake their tail feathers and their heads to get the attention of the hens. During these mating sessions hens can respond by bobbing their head up and down in an accepting response.

Here is a video to get an idea of what we are talking about.

A drake (male duck) will often flick water at a hen with its beak to get her attention just prior to mating. A drake may also swim around the hen with its neck and wings stretched out wide to indicate his intentions and mounting interest.

While not a given, once one drake gets all wound up in mating behavior, other males can have their interest peaked as well all pile onto a single hen.

How To Tell When A Duck Is Happy

Ducks will not only quack repeatedly in a high pitched tone when they are happy but they will also bob their heads up and down. When they are turned out to get in a pond, receive fresh water in their pool, or are getting a nice yummy snack the head bobbing could go on for as long as 15 minutes.

Ducks will not only shake their tail feathers after going for a swim as part of their drying off routine but also to show excitement. Duck tail feather wagging is akin to the happy and excited tail wagging of a dog when you return home to greet him.

If a duck tilts its head and stares they are not necessarily angry. When ducks tilt their head their eyes often remain in a fixed position in the socket so they can scan the horizon in many directions quickly, usually in search of predators or food. 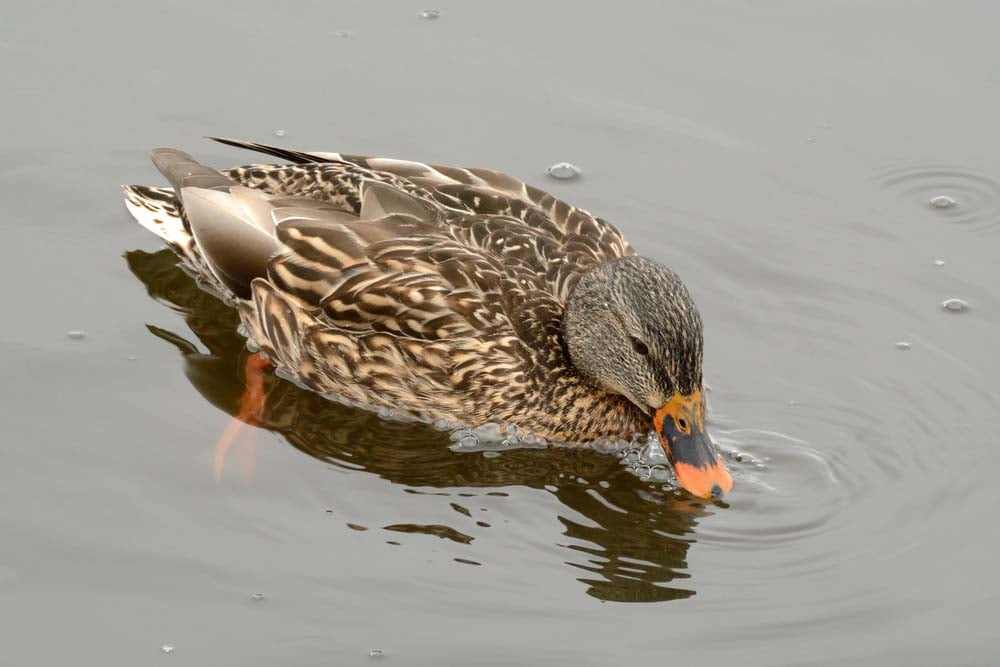 This is one of the funniest duck behaviors to interpret. Ducks will dip their little heads down into the water and then force breath out to blow bubbles in the water. This is the way they clean mud, feed, dirt, and feather bits that are stuck in their nostrils.

Ducks typically tuck their head beneath a wing and sleep with one eye open. The brain of a duck is “split” into two halves with each half controlling a single eye. One half of a duck’s brain can enjoy restful sleep while the other half – the part with the open eye, remains on high alert for predators.
Domesticated ducks or those living amid a large flock rest both parts of their brain at the same time – with one or two ducks possibly being tasked with “lookout” duties.

The placement of a duck’s eye plays a significant role in the walking in a row or straight line behavior that is common among all breeds – both wild and domesticated. The duck leading the row keeps an eye on the front and the ducks that are following continuously scan the terrain around them from side to side in search of threats …. Or food. 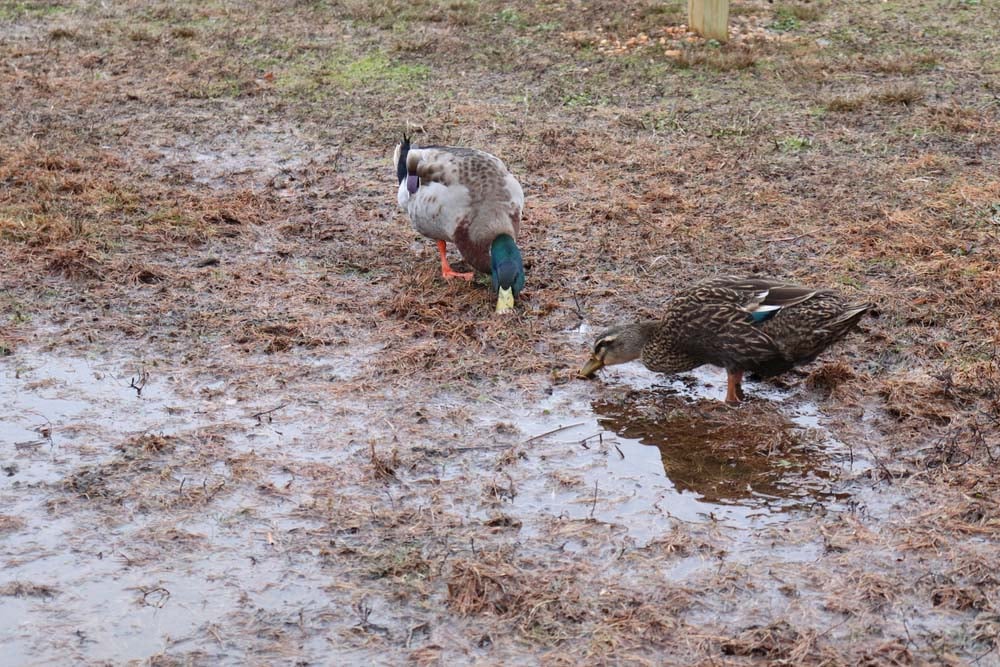 Ducks are almost always easier on flower beds and gardens than chickens. Ducks do not scratch and dig numerous holes all over the place. Unless there is a mud puddle to dig into while searching for insects to eat, ducks rarely engage in the same hole digging antics common among other poultry birds.

Once a duck climbs or hops out of a pond or swimming pool a duck will almost immediately start to preen. This duck behavior could go on for only a few moments or as long as 15 minutes.to distribute the natural oils they help keep their pretty feathers waterproof over their bodies to help themselves dry off.
At the base of a duck tale is where the preening gland is located. The act of preening will stimulate the gland to release the oils. These same oils help water roll off their backs both easily and quickly.

Side To Side Head Bobbing

Unlike the up and down bobbing action noted above, when a duck engages in this behavior it is quite unhappy. This type of movement is most often seen by the lead female ducks in the flock.

The hen can use the side to side head bobbing behavior to warn other female ducks away from “her” drake or when chastising ducklings for wandering too far from her watchful care.
Although the quack of ducks or the honking of hens is most commonly associated with these poultry birds, the do make other sounds, as well.

The sounds the ducks use vary greatly both by breed and by circumstance.
When a duck is: warning the flock about a predator, eagerly hoping for feed, courting, or experiencing stress, a multitude of urgent sounds can be uttered by a mature duck.

The louder the sound the more urgent the message the duck is attempting to relay.

Unless excited, courting, or frightened ducks remain rather quiet when out foraging for food or swimming. Ducks have no real natural defense against predators, hence the term, “sitting duck.”
To better ascertain what your ducks are doing with their day your ears should become attuned to the non-verbal noises a duck typically makes.

Ducks are such fun to watch interacting both on the water, and on land. When the typically quiet poultry birds start making a racket verbally, non-verbally, or demonstrating one of the common behaviors noted above, there is always a reason.

Ducklings will engage in the same verbal and non-verbal behavior as mature ducks from an early age, but the sounds they make often sound much softer and higher pitched. Ducklings learn from their elders and will repeat the sounds and behaviors modeled before them along with those that come naturally – just like other animal and human babies.

Being better able to determine what you ducks are trying to tell you just might help better protect them from predators.

The movements of the ducks along with their non-verbal cues can also help you learn more about their free ranging habits, food intake from foraging, and maybe even lead you to eggs laid while the ducks are wandering around outside of their coop and run. 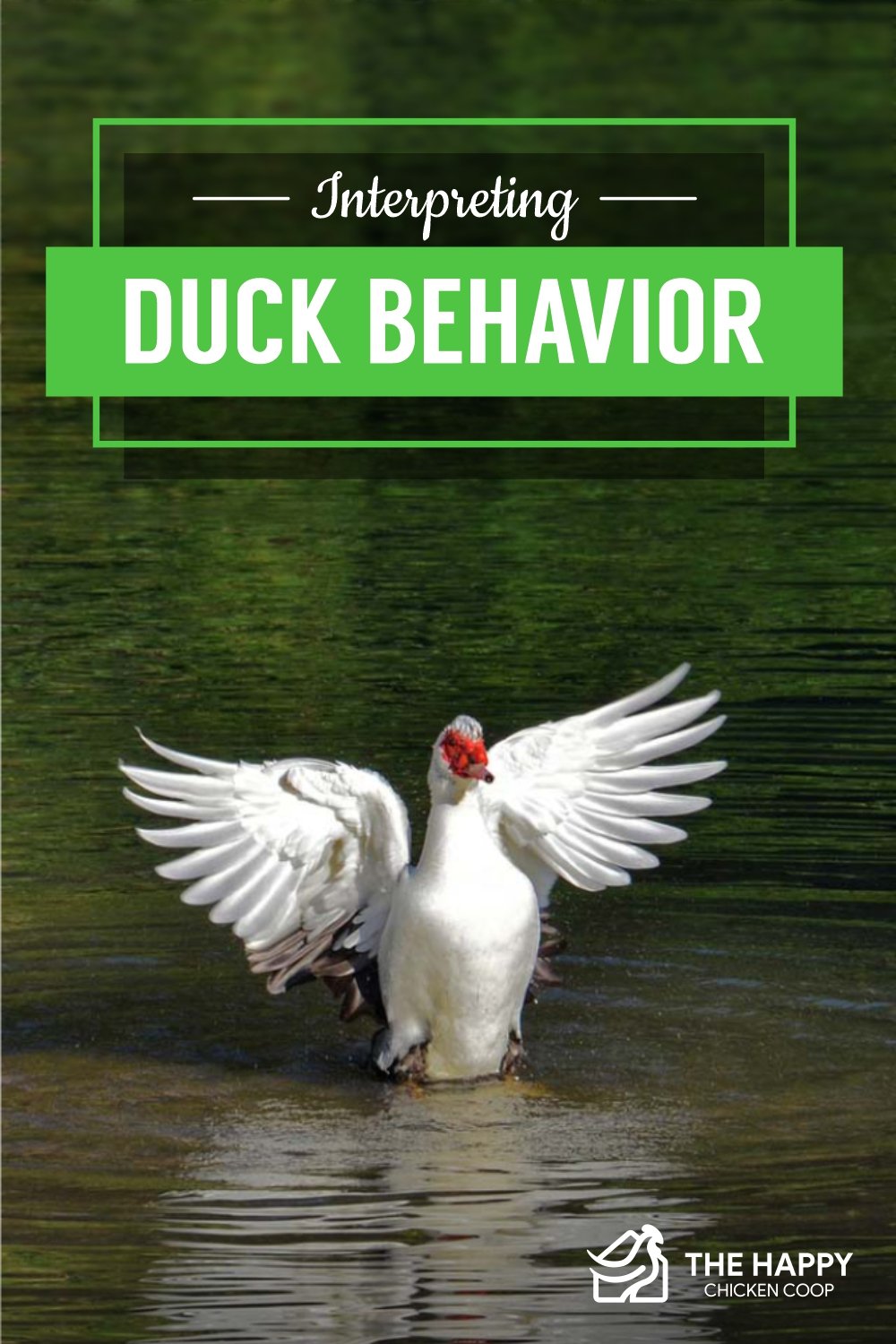