15 Ways to Deal with Aggressive Ducks 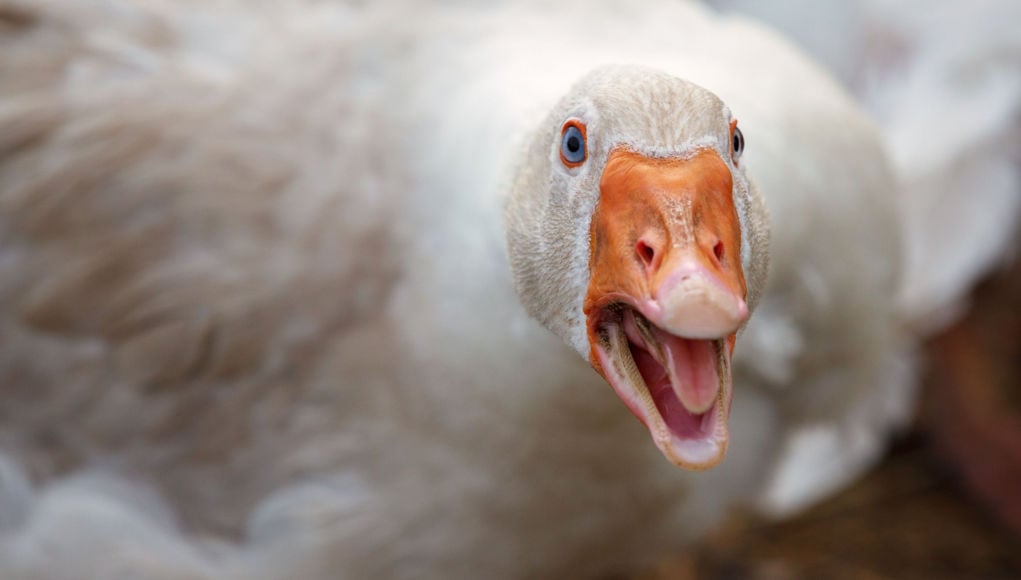 If you have ducks on your farm, you may have noticed that some of them can be quite aggressive.

While it’s normal for ducks to get into the occasional squabble, overly aggressive behavior can be a problem.

Fortunately, there are a few things you can do to deal with aggressive ducks on your farm.

Are Ducks Aggressive to Humans?

While ducks are generally peaceful creatures, there are some circumstances where they may become aggressive.

This is most common when a duck feels threatened or if it is protecting its young.

If you approach a duck too quickly or make sudden movements, it may become scared and attack in self-defense.

Even if a duck isn’t feeling threatened, it may still attack if it perceives you as a threat to its food source.

Ducks can be very territorial, and if they think you’re trying to take their food, they may attack.

For this reason, it’s best to approach ducks with caution and give them plenty of space.

Few people think of ducks as dangerous animals, but the truth is that they can be quite nippy.

While most ducks will only bite if they feel threatened, some breeds are more aggressive and may attack for no apparent reason.

However, ducks are not known for being particularly aggressive and will usually only bite if they feel scared or threatened.

Can You Get an Infection from a Duck?

While most duck bites will only result in a minor injury, there is a risk of infection.

Duck saliva contains a number of bacteria that can cause illness in humans, including E. coli and Salmonella.

Ducks can also transmit avian influenza and other diseases. As a result, it is important to exercise caution when around ducks and to seek medical attention if you are bitten. 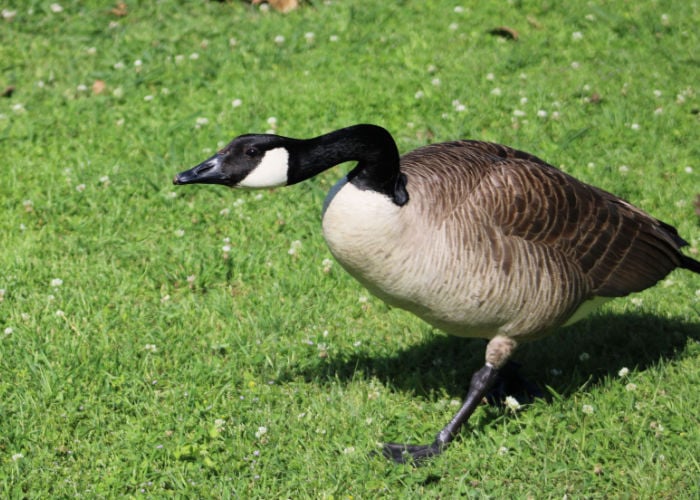 How Can You Tell if a Duck is Aggressive

If you’re thinking about getting a duck as a pet, it’s important to know how to tell if a duck is aggressive.

While ducks can make great companions, some can be quite aggressive, especially if they haven’t been properly socialized.

One way to tell if a duck is aggressive is by its breed. Some breeds, like the Muscovy duck, are known to be more aggressive than others.

Another way to tell if a duck is aggressive is by its behavior. If a duck is pecking or biting, that’s a sign that it’s feeling aggressive.

Additionally, if a duck hisses at you, that’s another indication that it’s not feeling very friendly.

Why Do Ducks Become Aggressive?

Ducks are often seen as gentle, docile creatures, but they can actually be quite aggressive, especially when they feel threatened.

Here are a few common reasons why your ducks might suddenly become ill-tempered.

One common reason is that the male duck, or drake, is trying to assert his dominance over other ducks in the area. This is especially common during mating season when drakes are competing for mates.

Another reason why ducks may become aggressive is if they feel that their young are threatened.

Female ducks are particularly protective of their offspring and will often attack anything that they perceive as a threat.

Additionally, ducks may become aggressive when fighting over food. If there is limited food available, ducks may start to compete with each other for access to resources. 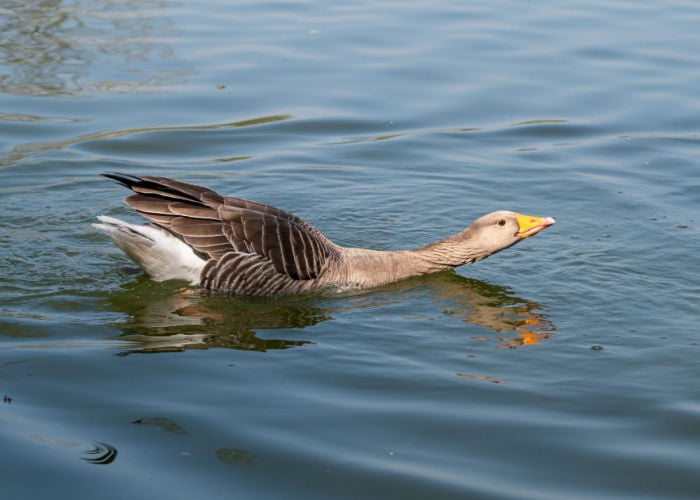 How to Deal With Aggressive Ducks

While not all ducks display aggression, it is important to be aware of the potential risks involved in interacting with these animals.

Here are some tips:

One reason why ducks might be acting aggressively is that they haven’t had enough opportunities to socialize. To remedy this, try giving them more opportunities to interact with other ducks.

This could mean adding more ducks to the flock or letting them out of their enclosure more often.

Make Sure You Have the Right Drake-to-Hen Ratio

One of the best ways to prevent aggression in ducks is to make sure you have the right drake-to-hen ratio.

A general rule of thumb is to have one drake for every four hens. This ensures that each duck has enough space and that there is not too much competition for mates.

If you have too many drakes, they will start fighting for dominance, and this can lead to serious injuries.

On the other hand, if you have too few drakes, the hens will become frustrated and may start bullying each other.

The key is to find the perfect balance, and the best way to do this is to consult with a duck expert or breeder.

With the right ratio of drakes to hens, you can help reduce aggression in your flock and create a more peaceful environment.

Have a Pond for Ducks to Mate In

One way to help ducks mate without aggression is to have a pond for them to use. This will give the ducks a place to mate without having to fight for territory.

There should also be some vegetation around the pond so that the ducks can eat and drink.

The pond should be located in an area where there is not a lot of human activity so that the ducks feel safe. 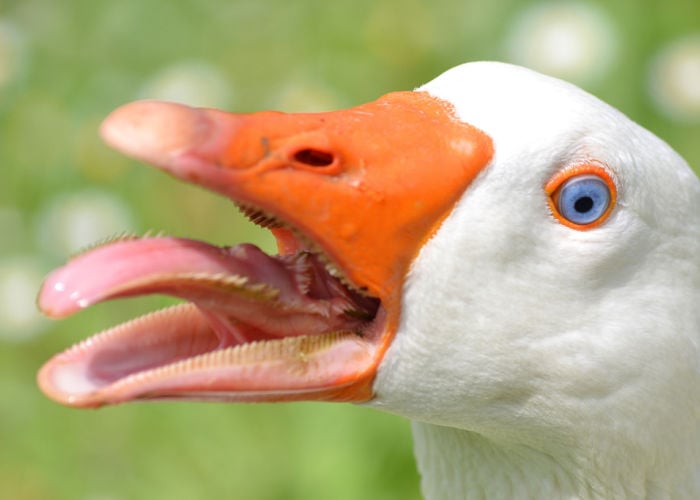 Separate Drakes from Hens if They’re Being Too Rough

If you have ducks, you may have noticed that the males (drakes) are usually the aggressors. They may chase the females (hens), bite them, or even try to mate with them forcefully.

While this behavior is perfectly normal, it can sometimes become a problem.

If drakes are being too aggressive with hens, it’s best to separate them. This will help to reduce stress on the hens and prevent injuries.

There are a few different ways to separate ducks, so choose the method that best suits your situation. For example, you could house drakes and hens in separate pens or coops.

Or, if you have a large pond or lake, you could let the drakes swim on one side while the hens swim on the other.

If you have to deal with aggressive ducks, it’s important to be prepared by having supplies on hand to deal with any injuries that might occur.

First, always keep a clean supply of water on hand to rinse away any dirt or debris that could get into the wound.

Second, sterilize any tools you’ll need to clean the wound, such as tweezers or scissors. Third, have a clean cloth or bandage ready to apply pressure to the wound if necessary.

Finally, don’t forget to have a safe place for the injured duck to rest and heal.

Keeping separate male and female flocks can help to reduce aggression, as the males will not be competing for mates.

It is important to provide ample space for the ducks to move around. If they feel cramped or restricted, they may become more aggressive.

Don’t Allow A Drake to Imprint and Assume Dominance

When it comes to ducks, aggression is often seen in drakes (male ducks). This is because they will imprint on the first living creature they see, which is usually the farmer or owner.

Once this happens, the drake will assume dominance over the flock and can become aggressive towards other ducks, especially if he feels they are a threat to his position.

The best way to deal with this problem is to prevent it from happening in the first place. This can be done by not allowing a drake to imprint on you or by keeping him separate from the rest of the flock.

If a duck starts quacking and flapping its wings at you, don’t back down. Instead, hold your ground and make yourself as big as possible.

The duck will eventually get tired and give up. This may take a few minutes, but it’s the best way to defuse the situation.

Pick Your Drake Up and Carry Him Under Your Arm

One effective way to deal with aggressive ducks is to pick them up and carry them under your arm. This will help to calm them down and prevent them from biting. 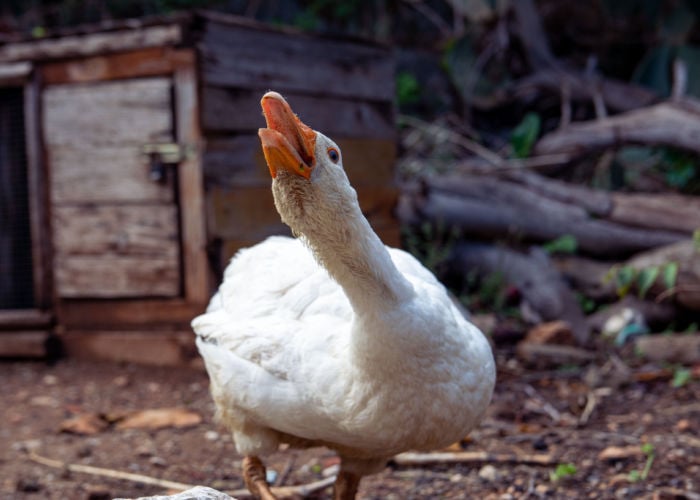 If your ducks are acting aggressively because they have too much energy, try redirecting that energy into positive activities.

This could include providing toys for them to play with or letting them swim in a pond or other body of water.

One of the most important things to remember is not to reward pecking with treats. This will only reinforce the aggressive behavior and make it more difficult to break the cycle.

Instead, try to provide plenty of opportunities for social interaction and positive reinforcement.

Try Not to Hand Feed

When ducks are fed by hand, they learn to associate people with food. As a result, they may become aggressive when they see people since they expect to be fed.

If you’re concerned about aggression among ducks, the best solution is to try not to hand-feed them. Instead, let them forage for their own food.

This will help them to remain independent and prevent aggression from developing.

Pin the Drake Down

One way to help reduce drake aggression is to “pin the drake down”. This involves holding the drake firmly on his back until he calms down.

This technique works because it eliminates the ability of the drake to use his wings and bill to attack. As a result, he becomes less aggressive and is more likely to calm down.

While this technique does not eliminate all forms of aggression, it can be a helpful way to deal with drake aggression in domestic ducks.

Another possible reason for aggressive behavior is a deficiency in nutrients. To see if this is the case, try changing their diet and see if that makes a difference.

If left unchecked, aggression can lead to serious injuries or even death. When dealing with aggression in ducks, there are two main options: culling or rehoming the aggressive animals.

Culling refers to the practice of killing animals that exhibit aggressive behavior. This is often seen as the easiest option as it immediately removes the problem animal from the flock.

Rehoming involves finding a new home for the aggressive duck, either with another farmer or in a sanctuary. This allows the duck to live out its life without causing problems for the rest of the flock. 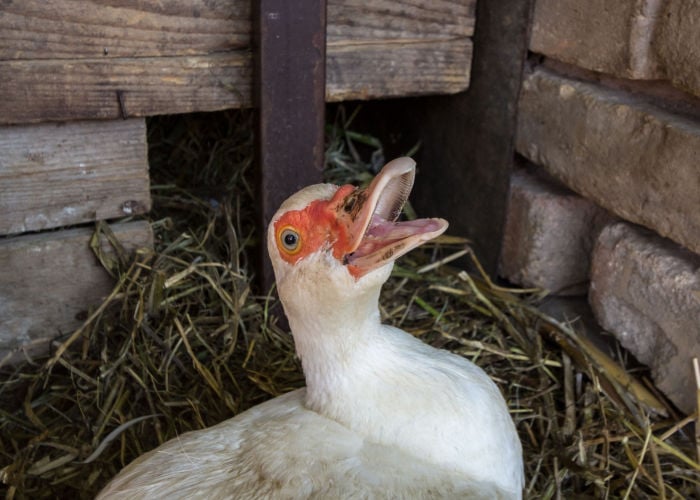 What to Do if a Duck is Chasing You

If your duck is chasing you, there are a few things you can do to get it to stop. First, try walking away from the duck.

If that doesn’t work, try spraying the duck with water from a hose. If the duck is still chasing you, try making a loud noise.

You may need to address one of the variables mentioned above to get your duck to stop chasing you—and to limit this behavior from occurring in the future.

How to Deal with Aggressive Ducks: Conclusion

Even the most even-tempered person can have a bad day every now and then. The same is true for ducks!

If your normally docile duck starts acting out of character and getting into fights, there could be a reason why.

Fortunately, there are plenty of ways to deal with aggressive ducks and how you can manage them when the time comes.

By following these tips, you can help minimize aggression and keep your duck happy and healthy.

READ NEXT: Why Do Ducks Bite? Everything You Need to Know