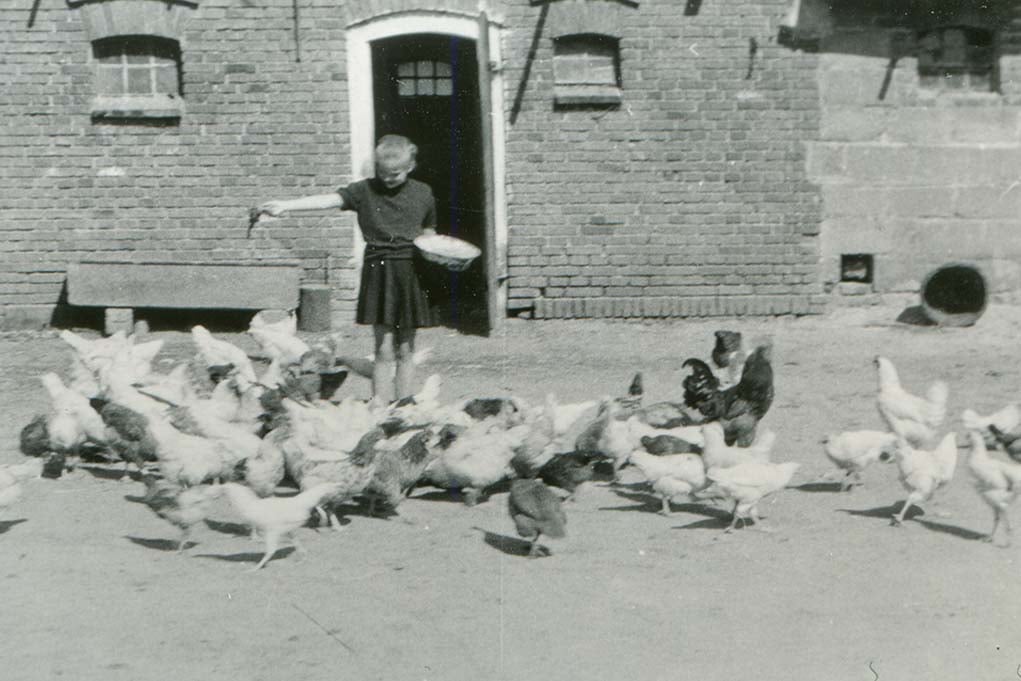 When talking about the history of chickens, the chickens today are spoiled beyond belief compared to Grandmas’ hens.

Hens of the past (1900s) had no regular access to essential commodities such as water and feed- this severely limited their egg-laying rate and also the size which they grew.

The chicken wasn’t considered a necessary ‘livestock’ animal on the farm. The meat was only eaten on very special occasions and eggs were a luxury.

Today, we will look back at the Humble Homestead Hen over the years and see how her lot has improved.

History of Chickens: When Did Chickens First Appear?

The origin of chickens is mysterious. No scientist can pinpoint the exact place or year of origin of these birds.

Generally, chickens were documented first to appear between 4,000 to 10,500 years ago. It was said to originate in Southeast Asia, northern China, and India.

The Southeast Asian Red Junglefowl is said to be the original wild ancestor of chickens. However, certain variations evolved over time and in different places until we have the kind of chickens today.

Because of these, some scientists may have lost track of the rare breeds of poultry, pointless to even retrace them now.

Our Condensed History of Chickens Starts in 1900s

1900-1920: Chicken Meat Is a DelicacyWe primarily raised chickens on family farms. We did not raise them in huge numbers- a flock of 400 birds would be considered significant.

Families who had flocks of this size sold eggs as their primary income source, and chicken meat was a delicacy being reserved for special occasions and holidays only.

The average chicken would lay between 80-150 eggs per year.

The chicken diet was basically whatever they could forage with occasional handouts of grain, scraps and waste kitchen products.

A hen destined for the pot would be fattened up with extra grains and buttermilk if available.

Housing was non-specific, either in the barn with the other animals or a separate outbuilding.

They certainly didn’t have a purpose-built coop like we see today, leading to a high mortality rate of around 40%.

Chickens also didn’t do well over the winter months due to a lack of vitamin D which is provided during the summer months through sunlight.

Vitamin D was discovered in the early 1920s and led to a small revolution in poultry keeping.

Hens could now survive through the winter months with Vitamin D supplements and go on to produce healthier chicks in the spring.

Her enterprise did so well, that by 1926 she bought a broiler house with capacity for 10,000 birds. She is considered to be the pioneer of the commercial broiler industry.

Following the Great Depression, agriculture was slowly regaining lost ground. We declared war between the US, Germany, and Japan following the attack on Pearl Harbor in December 1941.

This led to an increase in flock size to feed the troops.

Everyone who had a plot of land was encouraged to grow a Victory Garden. Even city folk were encouraged to form community gardens and help to supply fresh food for their families.

Raising and keeping chickens was encouraged, since they were small livestock and produced eggs!

Following the war years there was a massive change in the way they produced food. Chickens slowly began to be raised ‘intensively.’

These were the years that saw the most change for chickens.

They filled the vacuum with more extensive industrial operations.

Chickens stopped being a ‘luxury’ food; almost every family could afford a chicken. Broilers were now the #1 source of poultry meat.

1970-the 1990s: Advancements in Nutrition and Mass Production

The 1970s saw significant advancements in nutrition, genetic improvement of fowl, increased mechanization and the beginning of disease eradication programs.

Following these advancements saw the rise of animal welfare activists throughout the 1980s who campaigned (and still do) for animals’ rights.

During the 1990s there was more of a movement towards natural, organic birds and eggs.

Is chicken considered meat in the 2000s? More than ever!

Due to the demand for chicken eggs and meat, it would be no surprise that the population of chickens outnumbers the human population.

In the 2000s, there has been a deeper understanding of raising chickens. If you look at the chicken industry, they have improved their ways of raising flocks and producing quality by-products.

It is also in the 2000s that millions of people started having chickens as productive pets. The friendly and docile temperaments of some chicken breeds have made them the next ideal choice of pet birds next to cats and dogs.

History of Chickens in 2020

With the coronavirus pandemic spreading across the world, many turned to self-sufficiency or learning more about it. And chickens are one of the first animals that people add to their homesteading artillery.

Over the past five years, backyard chicken owners have emerged in full force. Task forces to promote city chicken-keeping have jumped onto the scene, and hatcheries have seen their chick orders triple with the onset of the COVID-19 pandemic.

Are the two related?

Most likely, a natural, more straightforward way of life may become the norm due to the new world the pandemic created.

Only time will tell.

So, how many chickens are in the world 2022, and what are they like nowadays?

Today, there are roughly 390 million laying birds in the US. They lay approximately 96.9 billion eggs per year and chicken is the most consumed meat in America.

As you can see, many changes have affected how the chicken has been viewed and used.

What changes were made to the hen herself in order to bring her to the forefront of the food industry?

Breeders, enthusiastic amateurs and farmers had been cross-breeding poultry for centuries.

The aim was to produce birds that could be either good egg produce or good meat bird. It was becoming clear that you really could not have a bird that excelled at both.

As a result of these developments in the 1920-50s several of the most common dual-purpose birds of today were created, including the: Delaware, American Holland, New Hampshire, Chantecler, and Rhode Island Reds.

More recent ‘streamlining’ of birds has led to the creation of such birds as the Golden Comet. The Comet is a great egg layer, but not considered to be a good meat bird.

The high volume of eggs slows down after the second year, so the birds are generally slaughtered and replaced.

Since the 1920s, we have bred the hen to be more ‘thrifty’ producers of meat and/or eggs. We have streamlined production methods in order to process more birds faster at a cheaper cost to the consumer.

Throughout the history of chickens, people have significantly benefitted from the evolution of these birds.

The chicken herself has seen significant general improvements in her diet, housing and care.

A better understanding of nutrition, the need for good sanitary practice and health checks have all enabled the chicken to live longer and more healthily.

Mortality had dramatically reduced from the beginning of last century when it was above 40%, to less than 5% today.

Chicken diseases are better understood and treated and vaccines are available for several of the more lethal diseases.

Care for the chickens’ health has improved enormously and the online resources of today can help the backyard keeper identify problems in their flock.

So, Grandmas’ hens have come a long way! Backyard chickens have enjoyed a renaissance in popularity in recent years and deservedly so.

Leave a comment below; we’d love to hear any of your stories about chickens of the 1900s! 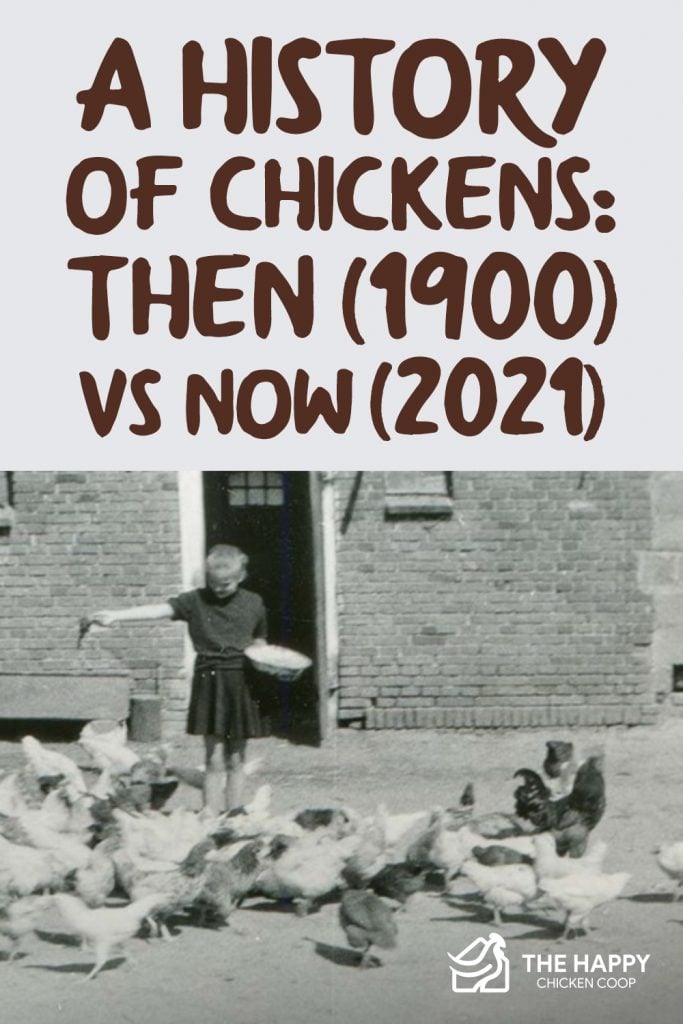