11 Black Duck Breeds You Should Know About 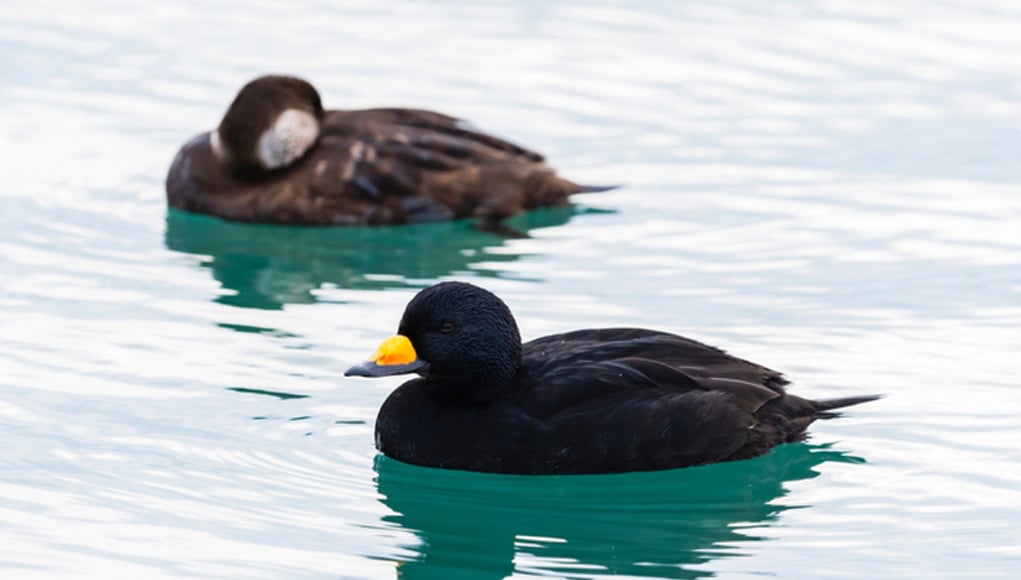 Are you looking for black duck breeds? Whether you’re searching for black ornamental breeds or ones that are as productive as their visual appeal, we got you!

We curated a list of black duck breeds to help you find the best birds with dark plumage.

So, what breed of ducks are black? If you’d like to learn more about them, let’s dive right into it!

Here are eleven black duck species you should know about and their distinctive features and qualities. Most of these species are found in the wild but are a few domesticated black farm ducks on this list too! 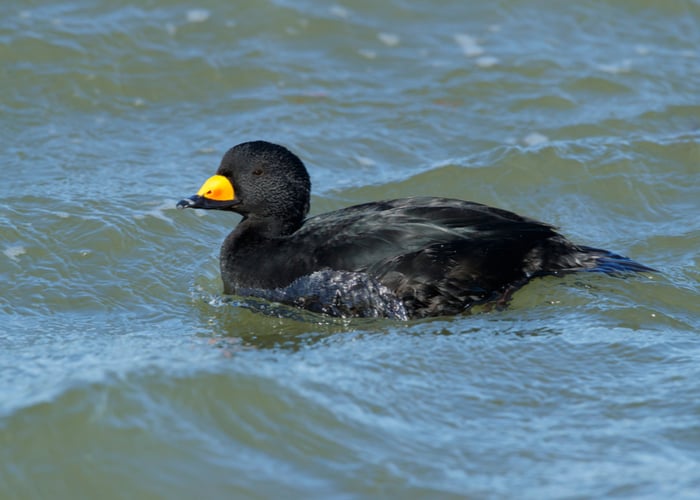 First on our black duck breed list is Back Scoter, a seaduck clothed with velvety black plumage, a bright orange knob at its bill’s base.

This distinct feature makes them unique and easy to identify.

However, female Black Scoters are motley brown in color, so they’re not easy to recognize. But they do have a unique feature which is the blackish head cap with pale tan cheeks.

This hardy sea duck, which ranges in size from medium to large, is common along rocky shorelines and in coastal areas, particularly in the Northeast of the United States.

Higher latitudes have marine habitats for Black Scoters. During the summer, they hunt for insects and dive for mussels.

They also feed on:

These ducks can also be recognized by their calls. They are very vocal waterfowl, and the males frequently croon in a manner akin to a melancholy dove. 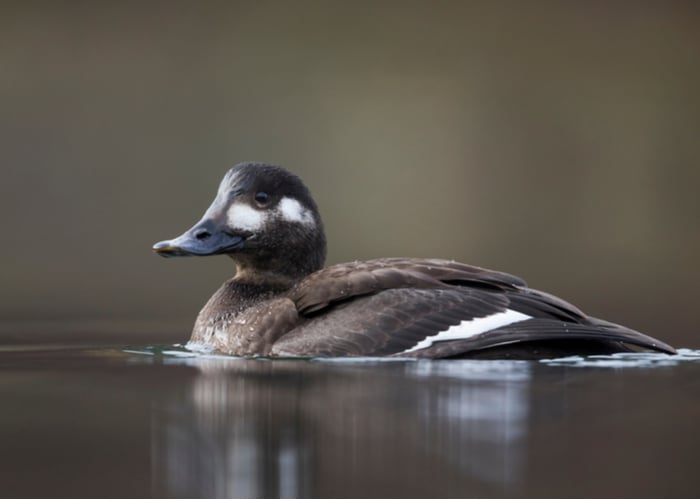 Next on our black duck breed list is the velvet scoter.

This medium-sized duck is common in coastal waters, ponds, rivers, and large inland lakes in Europe and Asia.

This scoter is characterized by its glossy black feathers, long yellow bill, thick neck, and upward-pointing tail. They also feature a white patch on their wings!

These birds’ diet usually consists of: 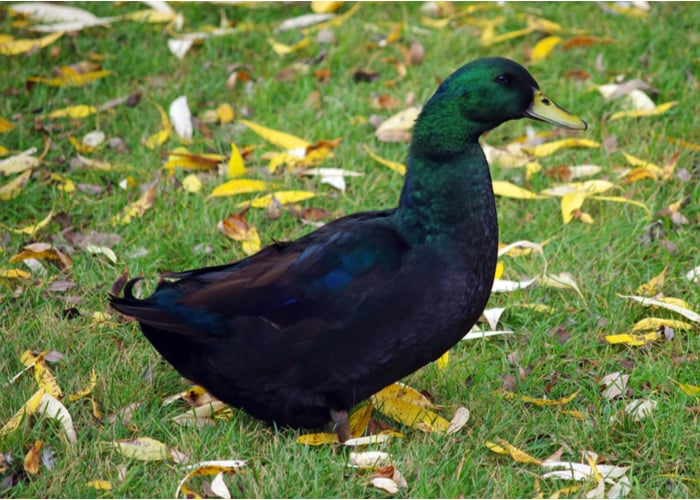 This medium-sized domestic black duck species boasts a beautiful black feathering topped with iridescent green shade on the neck down to its body.

Their bills and legs are also black and even their eggs are black.

A Cayuga female in decent shape can lay up from 100 to 150 eggs a year. As time goes on, the eggs’ original black color will gradually give way to shades of gray, blue, green, and white.

However, Cayuga ducks may develop white spots across their body as they get older.

It mostly consumes insects, snails, and slugs because it is a skilled forager.

These ducks are raised for their meat, eggs, and ornamental qualities. It is simple to raise it on a small farm or even in a backyard thanks to its calm and gentle attitude. 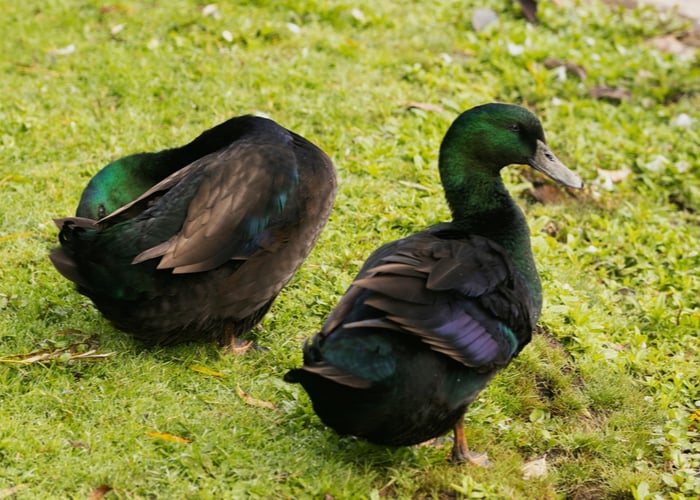 Similar to the previous black duck varieties, the East Indie also features an iridescent blackish-green plumage paired with a black bill and legs.

The female East Indie duck on the other hand is covered with dull, paired, or gray plumage.

The Black East Indian duck is the oldest breed of bantam duck and is also called by that name. Its beginning is still unknown.

The East Indie duck is thought to have originated in America in the 19th century by some, while others think it was imported from Buenos Aires.

Some theories contend that the breed was produced from the Mallard, while others believe that it was created by crossing it with the American black duck.

The American Poultry Association’s Standard of Perfection first acknowledged this duck in 1874, and the UK standardized it in 1895. 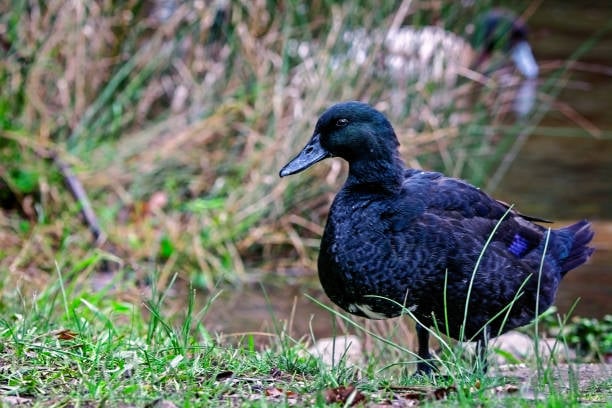 This is the rarest breed on this list but Pomeranian black ducks, also known as Pommern and Pommernente deserve to be mentioned too!

These medium-sized birds are native to Pomerania, a region on Germany’s Baltic sea coast. They’re available in two colors:

Their bills and legs are dark but their eyes are brown.

Pomeranian ducks aren’t just attractive because they can also provide meat and eggs for your family. They can produce 80 to 100 eggs per year and they make excellent pets too!

On top of that, they’re social and highly trainable.

However, they can be aggressive toward other duck breeds and very vocal and lively. 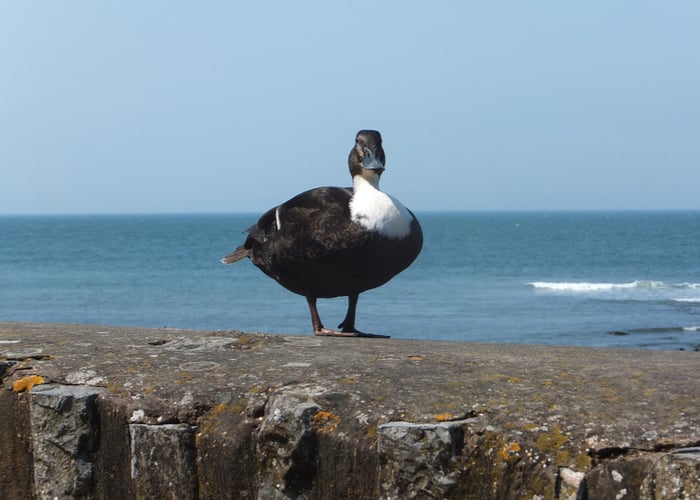 You may wonder why this blue bird joined our list for the black duck breeds. Well, Swedish blue ducks are actually black with grayish-blue shades and white bibs from under the bills down to their neck and halfway down their chest.

And their oval heads are dark blue while their bills are green. Both male and female Swedish blue ducks boast reddish-brown legs with grey patches in some areas.

It was developed in Pomerania in 1835 but the region was part of Sweden at the time, hence the name Swedish.

It found its way to America in 1884 and was recognized by the American Standard of Perfection in 1904.

They’re prized for their docile and calm nature and their ability to produce good meat and lay 100 to 150 eggs per year.

The problem with this black duck breed is their loud quack which can be troublesome for noise-sensitive people.

On the brighter side, they’re heat and cold hardy as long as they have constant access to clean water and thrive when they can move freely. 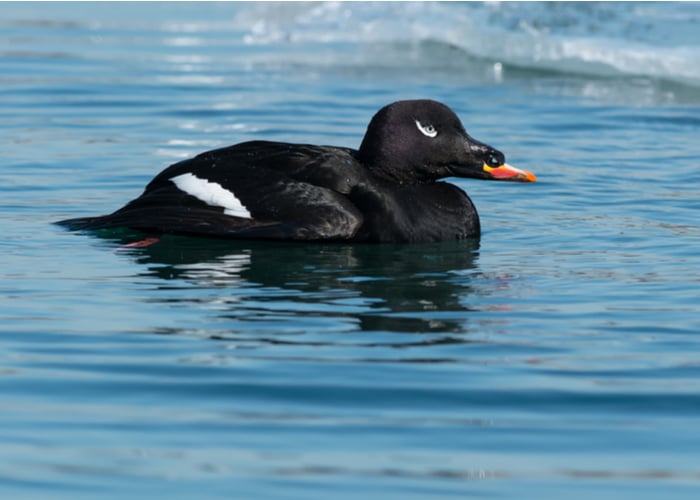 This large sea duck is the rarest yet the largest among the three scoter species on this black duck breed list.

You can spot them in coastal waters and freshwater lakes in northwest America’s northwest interior.

As its name indicates, this duck species have bold white patches on the wings paired with a thick neck and sloping bill, set on a velvety black body plumage.

White-winged scoter ducks also feature a distinct upturned white comma or “Viking horn” around their eyes and orange-tipped bill and pink legs. But female ones look slightly different due to their brownish plumage and white round shapes around their eyes instead of a comma.

They feed on mussels, clams, and oysters during winter but their diet shifts to crustaceans and insects during the breeding season. 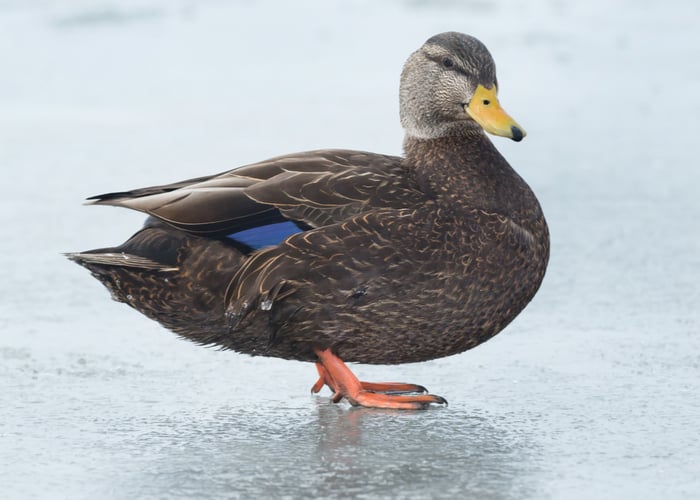 We’re down to the 8th black duck breed on our list. It’s actually not evenly black like other breeds, as they resemble female mallards in coloration but their plumage is slightly darker.

Both male and female American black ducks are clothed with black body plumage and pale brown heads. But there’s a small distinguishing feature that indicates their sexes.

They mostly feed on plants but they also eat aquatic animals, mollusks, amphibians, and crustaceans.

These birds are common in North America, specifically on the Atlantic coast and Mississippi flyways. But during winter, they migrate to the region between Long Island and North Carolina. 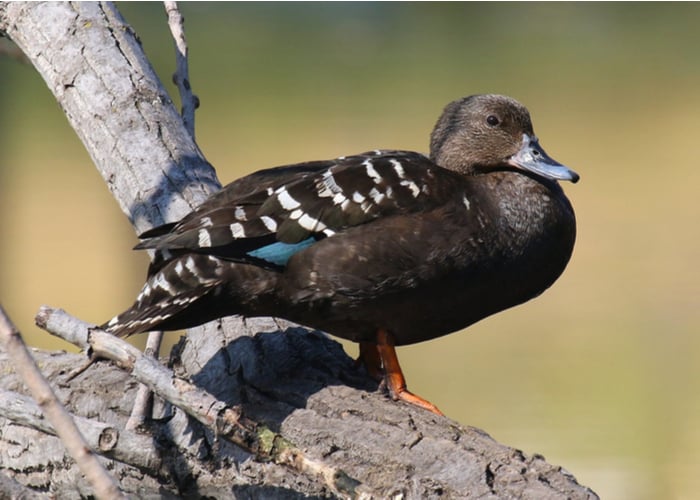 These black farm ducks prefer foraging on water sources like fast-flowing streams, rivers, and ponds with woody or rocky structures where they can stand while searching for food.

African black ducks’ identifying features are black to dark brown plumage with white spots around the back and rump, black bills, blue wingtips, and orange legs.

They may look similar to mallard ducks but they have darker plumage than brown mallards. 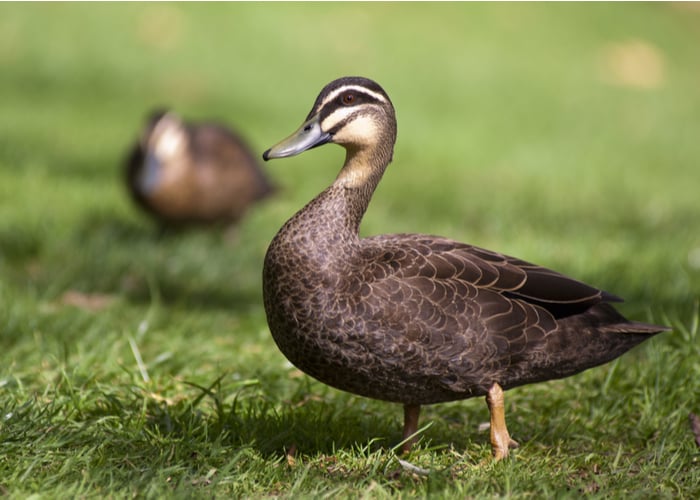 While this breed is called Pacific black duck, most of its plumage is actually brown that’s why they’re at the bottom of this list.

The middle part of their feathers has shades of black but the tan around the edges softens it and creates a mottled brown pattern.

But it complements well with the stripe pattern on their slightly domed head, purple/green metallic panel on wings, gray bills, and dark legs.

You can find them in lagoons, coastal, streams, swamps, and freshwater regions of Australia, Indonesia, New Guinea, New Zealand, and islands around the southwest Pacific.

Unlike other breeds, female Pacific black ducks are the ones who initiate the courtship by showing off some ritualistic moves like preening, wing flapping, and bobbing.

They’re omnivores but they usually feed on plants like aquatic seeds, leaves, and weeds. Then, they supplement their diet with snails, insects, crustaceans, and other tiny aquatic animals. 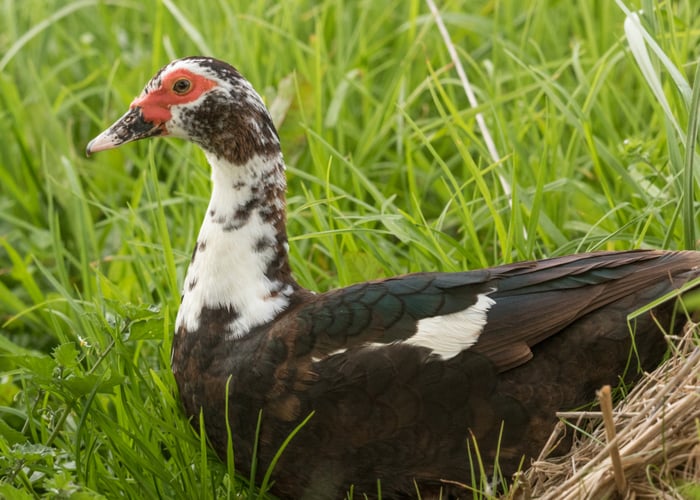 Male Muscovy ducks are the largest ducks in North America but the female counterparts are only half their size.

They love to fly to roost and nest on tree cavities and hollows and prefer to inhabit forested wetlands and forage on ponds and lagoons.

Their diet consists of: 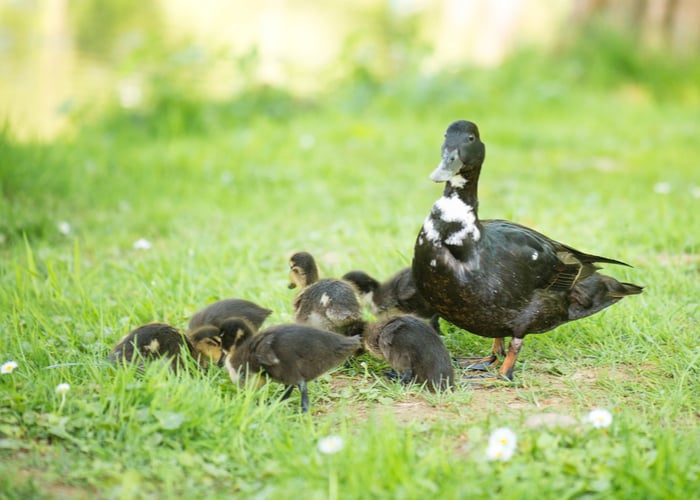 What kind of duck is black?

There are lots of ducks with black plumage but the most common ones are Black, White-winged, Velvet Scoter, Cayuga duck, Swedish Blue duck, Pomeranian Black ducks, and East Indies.

Is there a black duck?

Yes. There are many black duck breeds in the wild and including Black and Velvet scoter and Pomeranians. Other ducks on this list either have white patches on the wings like the White-winged scoter and iridescent green tones like East Indies and Cayuga but they’re still mostly black.

What are small black ducks called?

It may vary depending on the breed but they’re definitely going to be black ducklings. They may be rare since most black ducks have brown ducklings that become darker as they age.

Are there black mallards?

Mallards usually have brown plumage but there are black duck breeds like American and African Black ducks that feature black plumage. However, the latter two have different white patches and patterns that make them distinct from mallards.

Where are black ducks found?

American Black ducks are usually found in Atlantic and Mississippi flyways, specifically along the Atlantic coast, from the maritime Provinces to Florida. 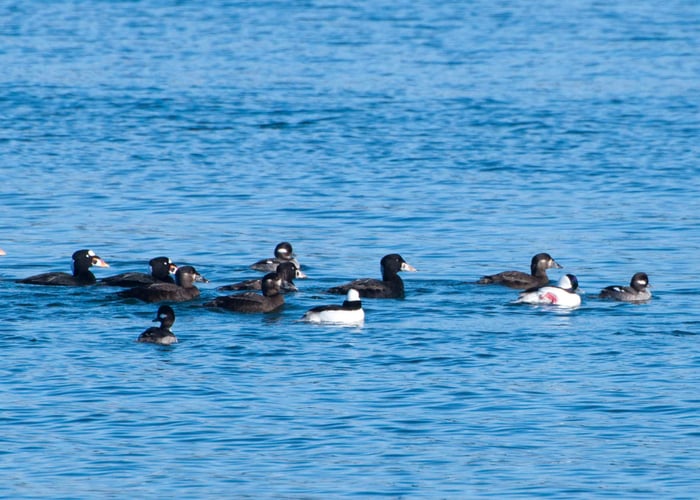 Which among the black duck breeds above is your favorite?

But if you want an excellent egg producer, Swedish Blue, and Cayuga ducks may be the right black farm duck for you.

Do you want other breed options that provide lots of tasty meat? Then check out this article below.