Can Chickens See in the Dark?- Interesting Facts About Chicken’s Vision 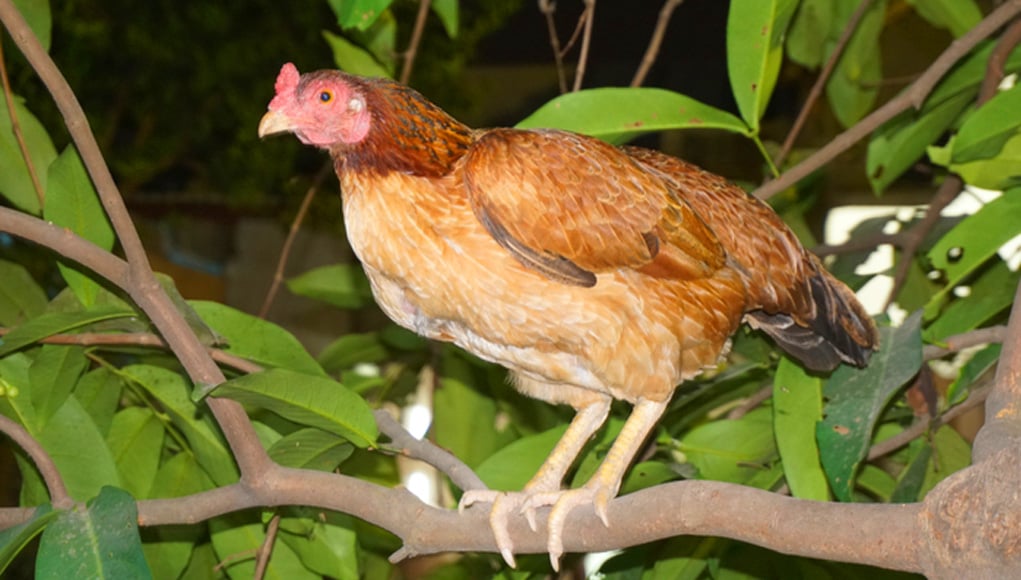 They have a 300-degree field of vision, and they have superior color vision compared to humans. But can chickens see in the dark?

In this article, we’ll discuss the following:

If you’re a newbie chicken pet owner who wants to learn more about your birds, join us as we uncover the dark mystery about the bird’s eye view.

But before that, here’s a little refresher about the chicken’s eye anatomy that’ll guide us in understanding their night vision.

Chickens rely heavily on their vision to explore the world, recognize other chickens and predators, and locate food and water sources.

But did you know how their vision works?

The cornea and lens are the first things that light passes through when it enters the eye.  The light then passes across the vitreous chamber, which contains a jelly-like fluid that aids in light transmission.

After that, the light reaches the retina, which is densely packed with sensory cells that transmit visual data to the brain.

There are two types of retina cells responsible for light perception.

First is the rod, which is crucial for creating images in low-light circumstances. But they do not transmit any color information to the brain.

The second is the cone (violet, blue, green, and red). Contrary to the rod, this cell is active in circumstances with higher light intensity and allows for color vision. 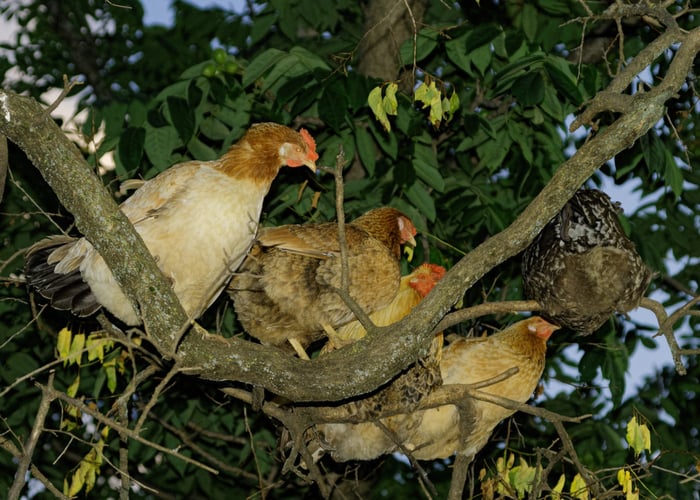 So, Can Chickens See In the Dark?

The direct answer is NO. Unlike cats and other nocturnal animals with night vision, chickens can’t see anything in the dark unless artificial lighting. That is because they have fewer rods than we do.

Rods are light-sensitive receptors that are responsible for an animal’s night vision. That explains why they can’t see as well as we can at night.

No wonder why they go to their favorite roosting place before the night falls and everything around them becomes covered by darkness.

That is also the reason why their body clock is very in sync with daylight hours. 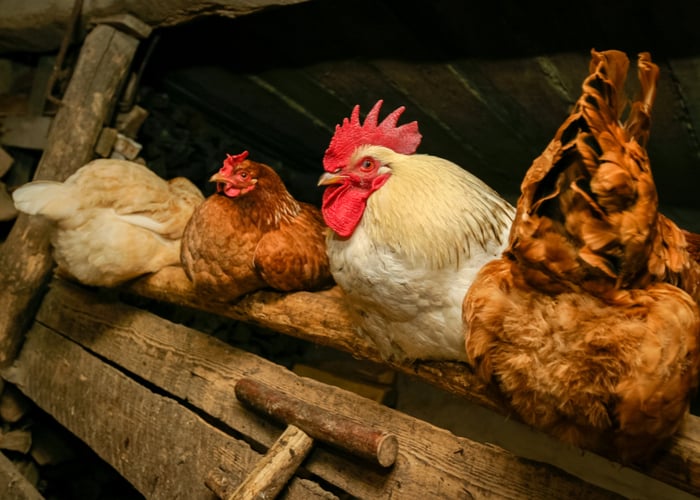 Are Chickens Blind At Night?

When it gets dark, chickens become effectively night-blind because they lose their ability to see once the light level drops below a particular point.

As a result, chickens become extremely sensitive as it gets dark because they have no idea what’s happening around them.

Thus, it’s our responsibility as chicken owners to ensure they’re safe from predators.

What Do They Do At Night?

Because chickens cannot see in the dark, they remain motionless when light levels fall below a specific threshold. A chicken will find its roosting area in the dark and stay there all night until it becomes light enough in the morning.

That’s why chickens do not require food or water in their coop at night. Even if you placed it there, they would not touch it while it’s dark, and it would just be pushed over when they awoke.

Since chickens can’t see in the dark, they must return to their coop for the sake of their safety against predators.

Foxes, for example, can smell chickens from a few distances, and they won’t hesitate to attack in the dark.

Good thing cases of chickens not returning to their coop at dusk are rare, and if it happens, there’s usually a reason why.

If your chickens do not return to their coop as they should, below are the tips on training them. 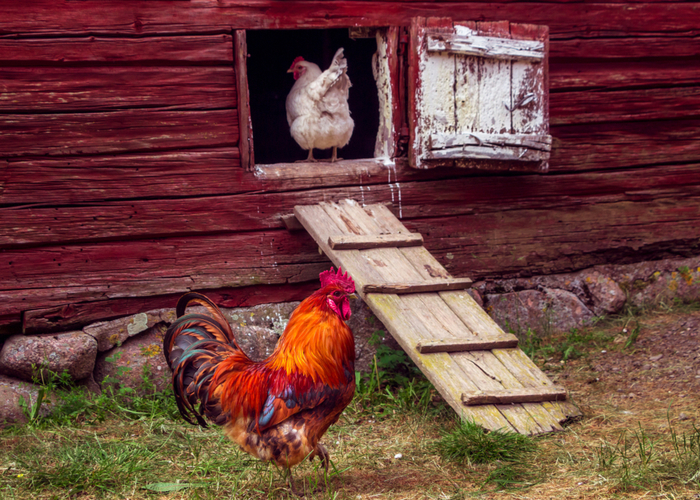 How to Train Your Chicken To Get Back To Their Coop

Chickens are creatures of habit. So once they know where their coop is and what time should they enter into it, they’ll quickly get used to that routine.

If you’re a newbie chicken owner who’s looking for ideas on how to establish a nighttime routine to help them know when and where to return at night, here are some tips for you.

1. Keep your chickens in their coop in about 1 to 2 weeks to help them get used to their pen.

2. Then, start letting them out to free-range or roam around at the same time every morning.

3. Observe when your chickens return to their coop and roost.

4. Lastly, close and secure the coop at the same time every night.

How to help them return to their coop

After those applying tips, here are some ways you can train chickens to return to their coop:

Ring a bell or command

You can associate treats with bells or your voice, and the chickens will finally come running at 100 miles per hour to see what awaits them.

But if you merely sprinkle it around and try to entice them into the coop, they’ll figure out what you’re up to and outwit you.

So, here’s how you should do it: 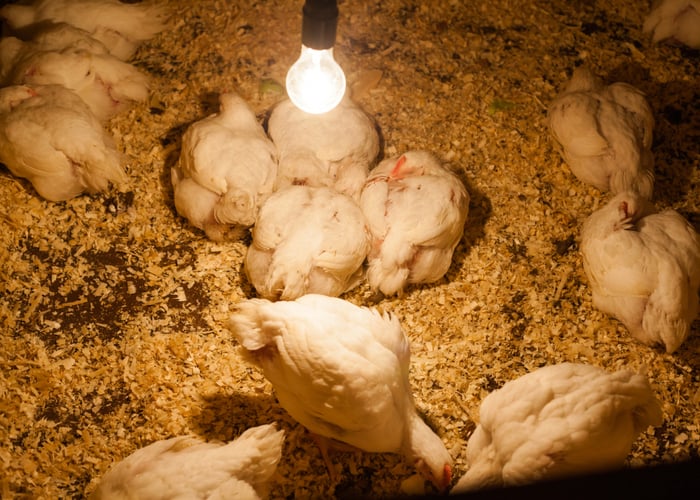 How Does Lighting Affect Chickens and Their Welfare?

Since the cones are not active at low levels of light, chickens may not see color in dimly lit environments, similar to how humans cannot see colors as well late at night.

However, chickens can see better with lighting. It’s not essential, but it’d be helpful if you want them to lay more eggs during winter and see better at their coop.

But what lighting systems should you choose for your chicken?

To help you make a wise decision regarding that matter, here are some things you have to consider.

3. Flicker: Chickens can perceive tiny light variations that humans can’t see because their eyes are sensitive. For example, fluorescent illumination is similar to strobe lighting to hens. Thus they become agitated when exposed to it.

Lighting Tips For Your Chickens

When it comes to poultry illumination, there is no one-size-fits-all solution.

The age of the birds, whether they are bred for meat or eggs, and the living surroundings they are given with all influence the illumination requirements. So, it is critical to offer periods of darkness for birds.

As mentioned earlier, it’d be better to have 6-8 hours of darkness. It’ll allow the birds to develop normal hormonal fluctuations linked to the 24-hour clock.

As the birds get older, they prefer to rest in dimly light regions and save their busy time for brighter locations.

That’s why you need lighting that has an adjustable light intensity for your chicken’s coop. 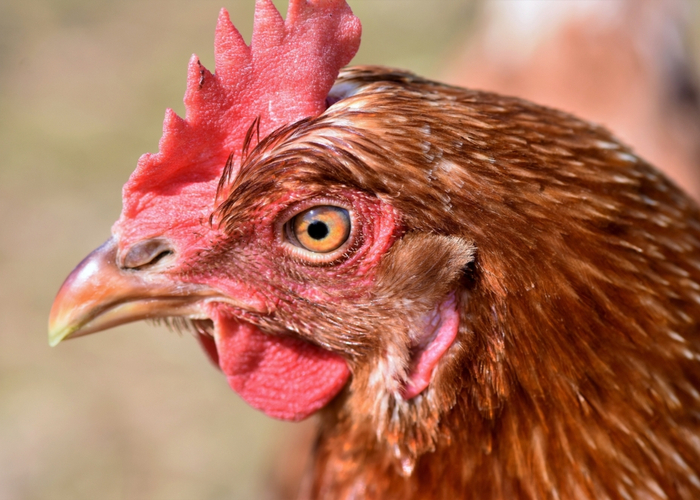 1. They have an uneven set of eyes when they’re born

Chick’s right eye is more prominent than their left eye at hatching. But they grow about the same size when they reach 2 to 3 weeks of age.

It means that they have four types of cones that allow them to see red, blue, green, and ultraviolet light. As a result, they see a much more comprehensive range of hues and tones than we do.

Additionally, thanks to their broad visual spectrum, chickens can perceive color and wavelengths of light that humans can’t distinguish!

The cones created specifically for UV light assist chickens in spotting any shiny bugs or` insects. Any seeds or fruits that they can quickly reflect in the dirt or grass too.

The fascinating fact is that the cones of a mother hen can help determine which of the baby chicks are the healthiest.

It occurs because the feathers reflect UV light, allowing the hen to discern which chicks are growing quicker and stronger quickly.

It will cause her to focus her energies on the healthy chicks, who have a better chance of survival than the weaker ones.

4. Their eyes have incredible motion detection

In addition to the UV cone, chickens have a motion detector in their eyes. As a result, it’s effortless for them to pick up on small movements, whether they are prospective victims or predators.

The pineal gland in the chicken’s head can detect the presence or absence of light. Therefore even a completely blind bird may see daylight or seasonal change.

Chickens have an entire field of vision of 300 degrees, with only 30 degrees being binocular. Prey animals have monocular vision, which allows them to see predators in their environment.

Unlike humans, who have superior and inferior eyelids, chickens have three eyelids.

The nictating membrane, the third eyelid in chickens, glides horizontally over the eye. It moistens, cleans, and shields the chicken’s eyes from dust and damaging particles.

It’s clear and sits on the side of the eye. Only when the chicken is washing or foraging in the dirt is it used.

8. They can use each eye for different tasks

Chickens can use each eye for different activities at the same time. The right eye of the soon-to-be-born chicks will be situated toward the shell while the left eye is directed towards the body.

As a result, the light is absorbed considerably better, while the body hides the left eye.

So, the right eye acquires far stronger proximity vision than the left, which they will use for distant vision.

In other words, their left eye is long-sighted, whereas the right is short-sighted.

They usually use the right eye when searching for food, while the left eye observes predators from afar. 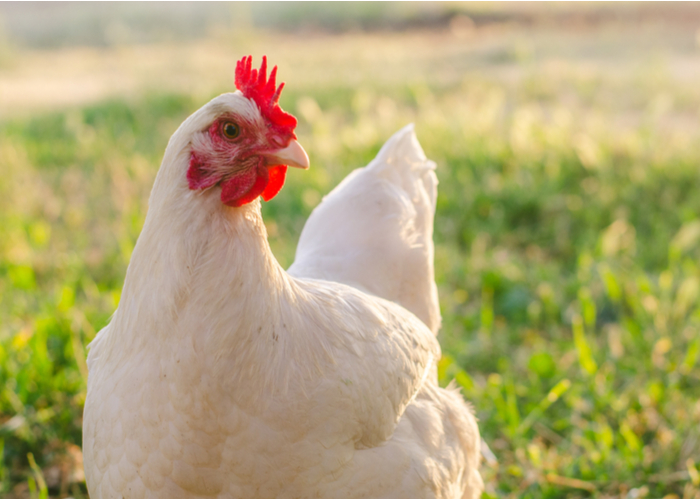 In Summary- Can Chickens See in the Dark?

To sum it up, chickens can’t see in the dark because they lack crucial rods for creating images in low-light environments. Their inability to see things at night makes them prone to predators. But on the brighter side, it also offers some benefits that you can take advantage of.

It would be easier to introduce new chickens to the flock at night since they’ll get to know each other while roosting without a fight.

You can also move them anywhere without hassle because they’re sleeping and roosting on their coop.

On top of that, you don’t have to provide food at night since they’ll roost and sleep all night as humans do.

READ NEXT: 25 of the Best Chicken Facts (Binocular Vision, Dinosaurs, and More) 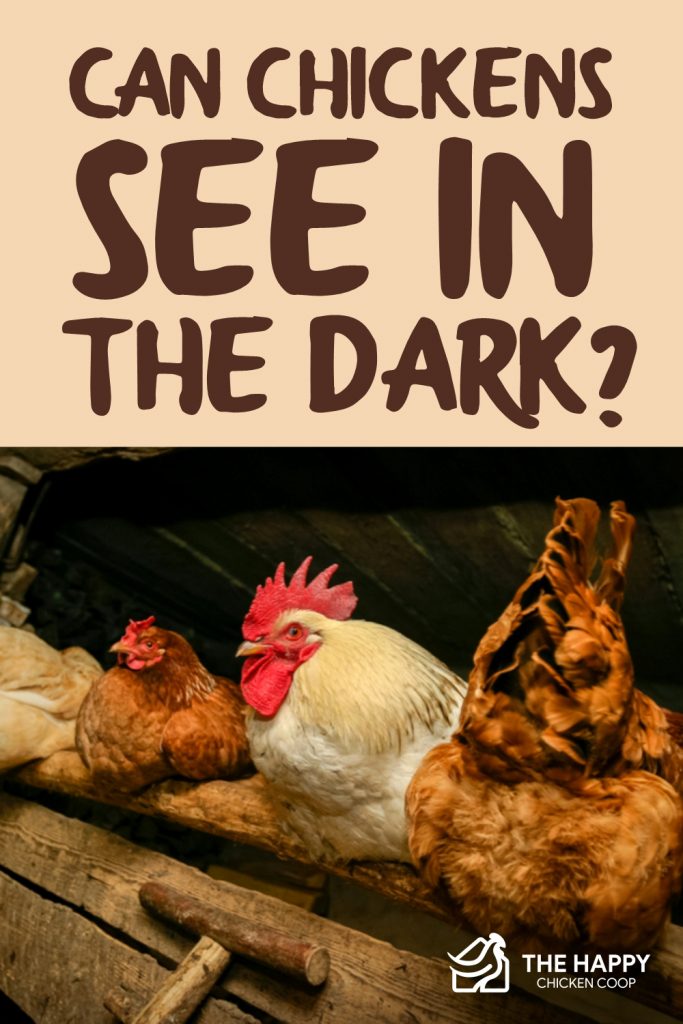