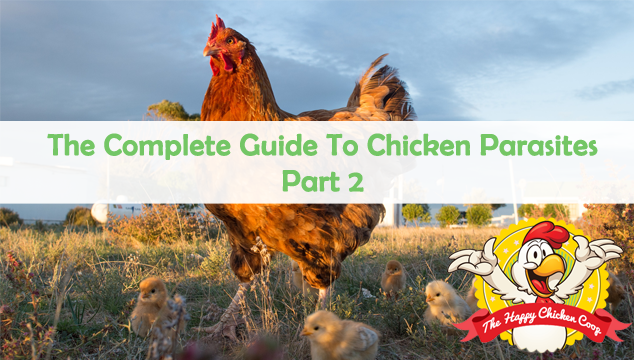 In the first half of this series, we focused on discussing the harm that parasites can cause your chickens. We won’t repeat this information again; however just remember the key takeaway: prevention is far better than cure.

Let’s now turn our attention to internal parasites and look at how you can spot the parasite and more importantly, cure the parasite.

Worms are by far the most common internal parasite and unfortunately, there are a wide variety of worms.

The good news is that with care and tidy housekeeping you should be able to keep your girls worm-free.

Chickens that roam outside are unfortunately the most likely bird to catch a form of worms.
There are two methods by which a bird can become infected – direct and indirect.

Direct is when the bird forages and eats the parasite’s eggs from infected poop or pasture. Indirectly is when the hen eats another creature (e.g. earthworm, snail, or slug) that is already infected with the parasite

How To Stop Chicken’s Getting Worms.

Prevention is far better than curing and some relatively simple measures can help to keep worms at bay:

These preventative techniques can be used on any type of worm parasite.

However some types of worms require specific treatment, so let’s take a look at the various types of worms that chickens catch and how to treat them.

Roundworms are the most common type of worm to infect a chicken.

If your chicken has contracted roundworm, symptoms to look for include: a loss of appetite, watery poop, decreased egg-laying, dull comb, wattles and eyes, wanting to be alone, dehydration, and a loss of balance.

Very occasionally in severe cases, a worm can migrate to the hens’ oviduct and a worm will be found inside an egg – a decidedly unsavory experience!

Note: As unappealing as it may look, it is not a health threat to humans.

Younger chickens are more susceptible to worms and will struggle to put weight on them if they have contracted them.

This is why you need to be extra vigilant with young hens, after around 4 months they will develop some resistance to the worms.

There are several treatments that can be used.

Wazine is the most common drug used and is approved for poultry use. It comes in a liquid form and needs to be mixed with your chickens’ water.

Worms are slowly becoming resistant to some of the more common worming medicines, so I advise you to use wormers sparingly and with caution.

Some people worm their flock every 6 months regardless of whether their chickens have worms- my approach is, if you don’t see a problem, don’t unnecessarily treat your chickens with medicine.

This little critter lives in the crop, esophagus, and proventriculus (marked with pink arrows in the image opposite) of the bird.
Its symptoms are very similar to Roundworms: loss of weight, looking tatty, reduction in egg-laying, and food intake.
The treatment of Capillary worms is the same as Roundworms, and you can use Wazine.

Tapeworms require an intermediate host (earthworm, snail, etc) to be able to infect your bird.

They don’t usually cause too many problems, however, they can cause the bird to lose weight and look thin, but they are rarely fatal.

Good coop hygiene and cleanliness is the best way to prevent your chickens from contracting Tapeworms.

This type of worm is mainly found in warmer climates such as the Southern states of the US.
Again like Tapeworms, it requires an intermediate (i.e. cockroach) to spread.

Symptoms include scratching at the eye, drainage, redness, swelling, and a cloudy discoloration of the eye.

If left untreated it can eventually lead to blindness.
To treat Eye Worm you need to use VetRx.

VetRx comes in a canister which you can then spray over your chickens. After a few cycles of the spray, the worm should be cleaned up.

These nasty little worms reside in the birds’ respiratory system.

If the infestation becomes severe enough, the affected bird will gape its’ mouth to get air – this is known as ‘the gapes’. Other symptoms include: head shaking, hissing when opening its mouth, and stretching its’ neck.

A severely infected bird can die- early signs are lethargy, looking unkempt, and a sudden loss of weight.

If the infection is not very severe then a wormer such as Wazine can be used. 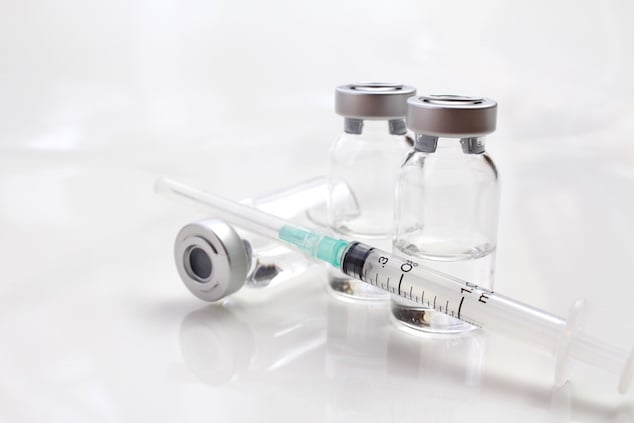 However, in the case of a bad infection you need to consult your veterinarian. They will typically prescribe Fenbendazole- however, be careful as overdosing your bird with this medicine can kill a hen.

Remember: If you are concerned that your birds may have worms, collect a fecal sample from several birds and take it to the vet for testing. The test is relatively quick and cheap.

Protozoa is a single-celled organism- most of which are harmless. There are a few however, that can cause havoc in your flock.

The most common and devastating of these protozoan diseases is coccidiosis.

Coccidiosis is usually more problematic in chicks and growing pullets and is usually the prime suspect in the cause of death between the ages of 3-6 weeks.

Chicks who forage with their mothers gradually build up immunity to the disease by being exposed to it.

However, chicks brought in from outside sources are most likely to suffer since they have no immunity to the Coccidia present in their new surroundings.

It is always best to keep new chicks isolated on clean litter with clean water and food dishes for at least 2 months.

If you intend to expose the chicks to your existing flock, you will need to get them vaccinated by your local vet.

If you are raising chickens organically and do not want to use medications, keep your chicks away from the flock until they are at least 2-3 months old, then you can introduce them to your existing flock.

Watch them carefully during this introduction period and if they show any signs of lethargy, looking tatty, bloody diarrhea – isolate them and treat them immediately.

I cannot stress enough the devastation coccidiosis can cause in a henhouse. Although I have never experienced it myself, it is heartbreaking to watch.

As noted many times before prevention is better than cure, so probiotics added to water, a clean henhouse, and frequent health checks can all help to avoid this devastating disease.

Toxoplasmosis is an infection that is caused by Toxoplasma gondii (T. gondii).

This is one of the few parasites which we’ve written about that can affect both humans and chickens. In fact, it’s estimated that 1/3 of people will be infected by Toxoplasma gondii during their lifetime.

It is spread by rodents, flies, and cockroaches and is found in the poop of infected animals.

Toxoplasmosis is harmless although to prevent you from catching it care should be taken to always wash you’re your hands after being with your birds and make sure to use gloves when you clean out the coop.

Giardiasis is an incredibly rare parasite and it is usually not problematic unless it overruns the immune system.

If you suspect your chickens have Giardiasis, visit your local vet and they will prescribe your chicken’s antibiotics.

Pumpkins are touted as a natural remedy or prevention to worms in poultry and cattle, but as of now, there is little evidence to support this claim.

With that being said, pumpkin seeds have characteristics that may make an otherwise attractive environment for a worm to thrive, less desirable.

It never hurts to give your chickens pumpkins throughout the year, just make sure they haven’t begun fermenting.

You can add pumpkins to your parasite prevention routine because at the least, the pumpkins will provide your flock with a healthy treat.

Making sure your chickens are well kept and free from parasites isn’t easy but providing you keep your coop clean and do regular health checks then you are definitely starting off on the right foot.

That completes our look at internal chicken parasites.

If you missed the first part of the series on external parasites you can catch up here.

It should be stressed that most backyard chickens do not suffer from the more uncommon parasites. As always – good sanitation and housekeeping practices will help to limit the exposure of your flock.

All sick birds should be isolated and watched carefully. Take notes of the behavior of the bird, what symptoms has it got? Watery poop? What color? Eating? Drinking?

As gross as it may sound noting all of these things can help you to narrow down the likely suspect disease and will help you treat it more effectively.

Let us know below if you’re going to start keeping a health diary for your chickens! 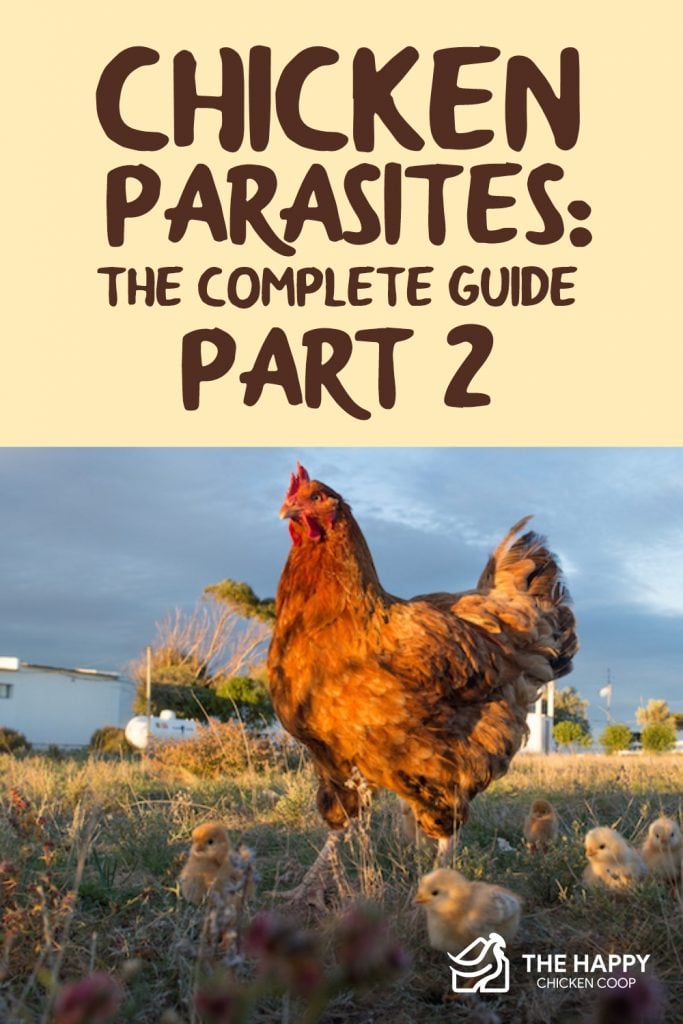