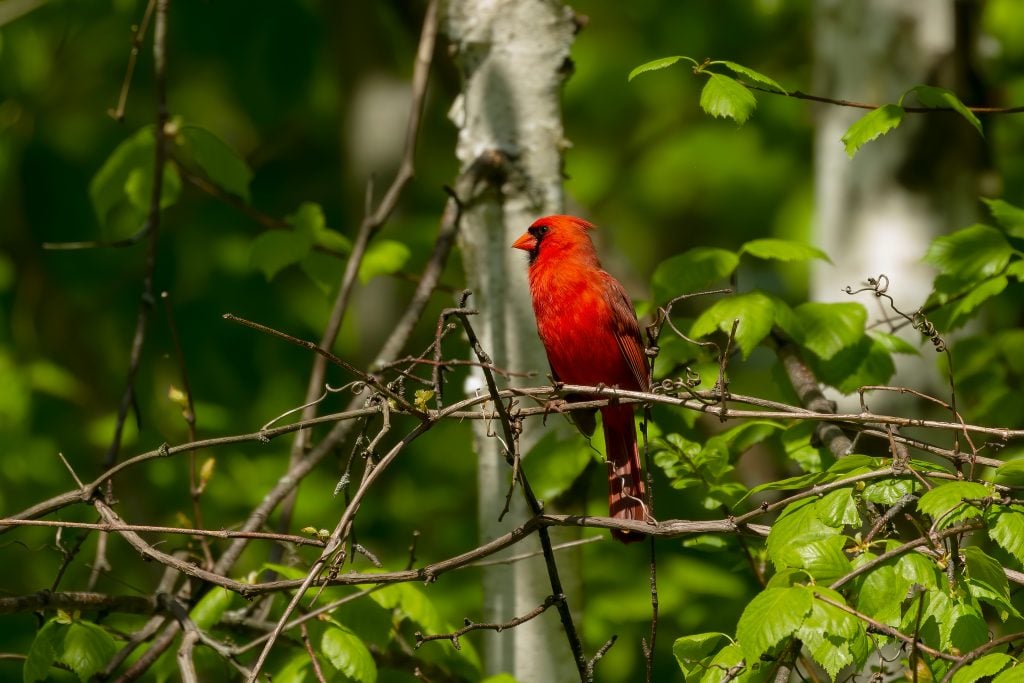 Whether you see them only occasionally as they fly from shrub to shrub, or you have a family of cardinals living in your backyard birdhouse.

You’re likely wondering whether there is any cardinal symbolism that you should be aware of.

The cardinal is one of the most well-known and iconic birds in North America. It’s a symbol of warmth, joy, and love for many people.

But how much do you know about these beautiful creatures? Please keep reading to learn more about the beautiful symbolism that they’re hiding behind their vibrant red plumage. 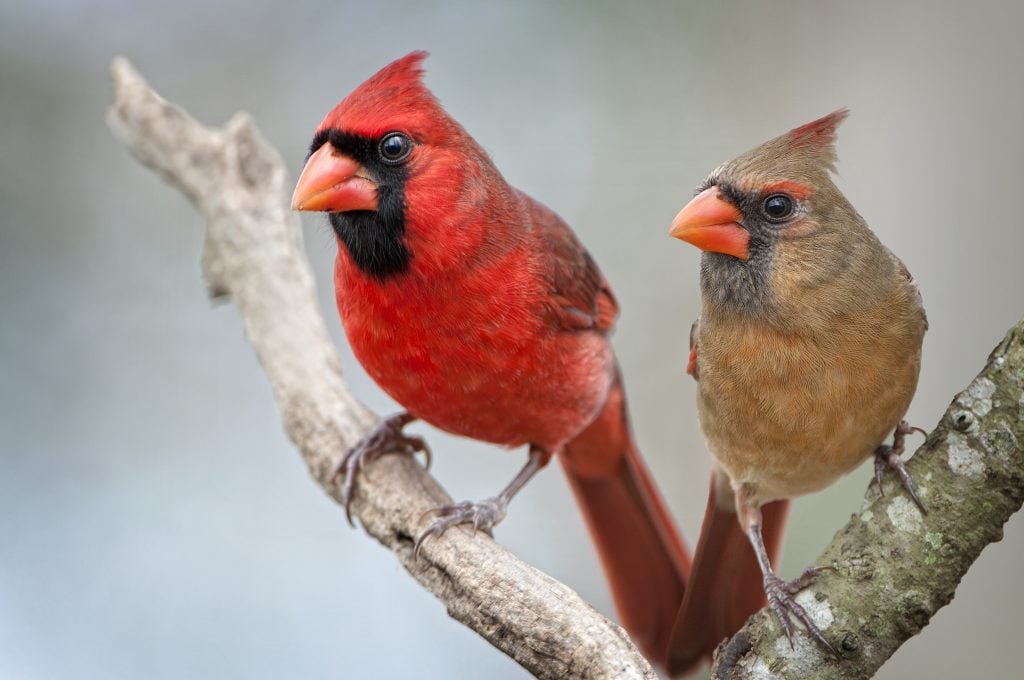 Found in the eastern United States and southeastern Canada, these birds also travel to tropical climates such as Guatemala, Belize, and Mexico.

They’ve even been introduced to places like Hawaii and Bermuda! Cardinals like to hang out in gardens, wetlands, shrublands, and woodlands.

They are medium-sized songbirds with nine-inch bodies and distinctive crests.

Beyond the crests, these birds are known for their vibrant red feathers – however, it’s only the males that display this kind of coloring, with the females instead having a reddish olive hue.

The birds were once popularly kept as pets, but with the trade now illegal, they are viewed with admiration and awe whenever spotted in the wild.

If you’ve ever seen a cardinal in your backyard, you might view it as a harbinger of winter or a symbol of loved ones who have passed.

Yet the meaning beyond a cardinal goes far deeper than that – these birds are animals that are truly meant to be cherished no matter where they choose to fly!

Cardinals have many meanings, contexts, and nature depending on your culture and what type of cardinal you happen to see.

Many times, these birds are associated with the idea of hopefulness. They tend to appear in the spring after a cold, harsh winter, so it’s easy to see why they might serve as a ray of hope.

A common saying is “cardinals appear when angels are near.” This saying, closely tied to the Christian faith, is often taken quite literally.

If you happen to see a cardinal near your home, this should serve as a reminder that your passed loved ones are still with you – and that you should embrace any new beginnings that lie ahead.

Cardinals are viewed as spiritual messengers from high. It would help if you thought about slowing down and reconnecting with your soul to rid yourself of any depression.

Seeing a cardinal is a good sign that you should slow down and take the time to get your energy back.

On a more whimsical note, it’s also easy to view cardinals as symbols of activity and vigilance. They can even be viewed as symbols of self-confidence!

These birds are talented beauties that keep moving forward regardless of the obstacles they encounter. If you see a cardinal, use the opportunity as a reminder to keep working toward your goals no matter what.

Cardinals can be viewed as symbols of power and stability, particularly the stability of a close, strong family.

Male cardinals are responsible for nurturing the fledglings, which is unique – with most bird species, this is the job of a female.

Therefore, when you see a cardinal, you should take it as a reminder of the stability you can bring into your family.

Of course, the cardinal is the classic symbol of the winter season, too.

As colder weather approaches, both the bright greenery and exotic colors of nature tend to fade. That’s not the case with the cardinal, though.

Even in the middle of a blinding snowstorm, the appearance of a vibrant red male cardinal can remind you that life goes on no matter what. 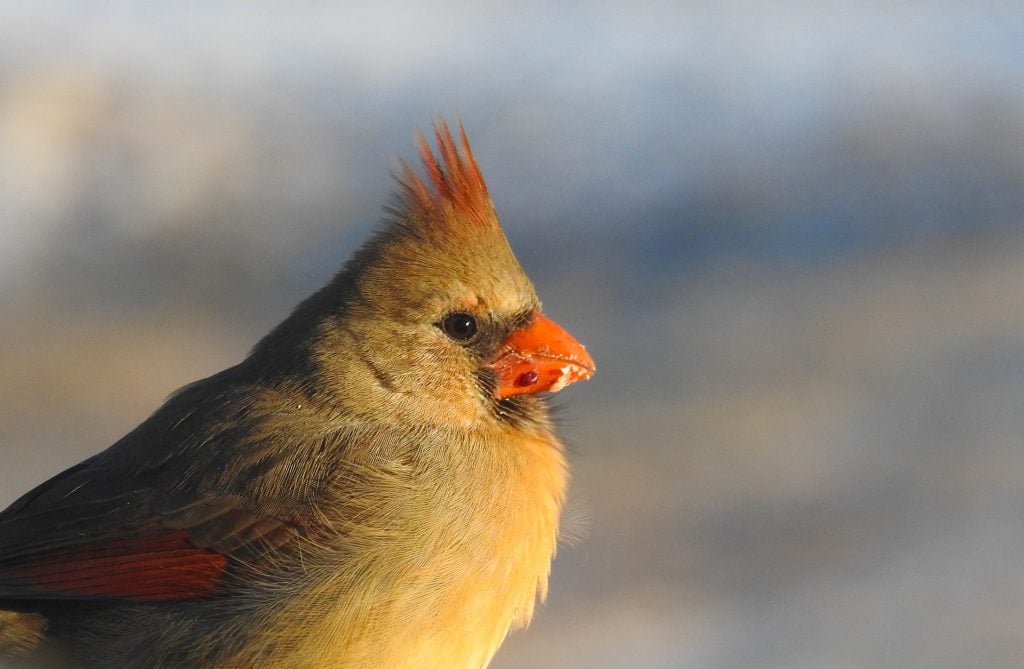 There are all kinds of symbols you can examine when it comes to Native American symbolism and cardinals.

These birds are viewed as representations of devotion, courtship, monogamy, and loving relationships in traditional Native American lore.

They can be the harbinger of rain or good fortune – or in some cases, bright sun.

Many tribes believe that you will have good luck within just twelve days of the sighting when a red cardinal appears.

The Cherokee tribe, in particular, associated the red cardinal with the sun.

They considered the bird to be a positive omen—one legend described the first red bird ever to be seen as the daughter of the sun.

A bit ironic, given that only male cardinals are the bright red shade that we know and love!

Seeing a Cardinal and The Christianity Symbolism​

In Christianity, cardinals are viewed as symbols of everlasting life and vitality.

This is due in part to their bright red feathers. They mimic the appearance of the blood of Jesus.

In this sense, cardinals are viewed as symbols of everlasting life and vitality. They represent life, restoration, and hope.

There are many meanings beyond that, too.

If you’re familiar with the construct of the Catholic Church, you likely know that the highest officials of the church are called cardinals.

These officials wear bright red robes to represent the blood of Christ.

These red birds serve as a profound reminder of the beauty of God. Every time you see one, it should remind you of the story of Matthew.

In this story, God reminded us not to worry about what we drink, eat, or wear.

God knows what we need and want, and everything will be provided to you if you believe in the kingdom above.

Cardinal Symbol to The Celtic

Many people ask about the symbolism of the cardinal in Celtic culture.

Although this culture ascribes meaning to many different things – including types of birds – this is one bird with no symbolism attached. That’s because cardinals aren’t naturally found in Europe.

Therefore, the Celts don’t have any symbolism attached to this bird. 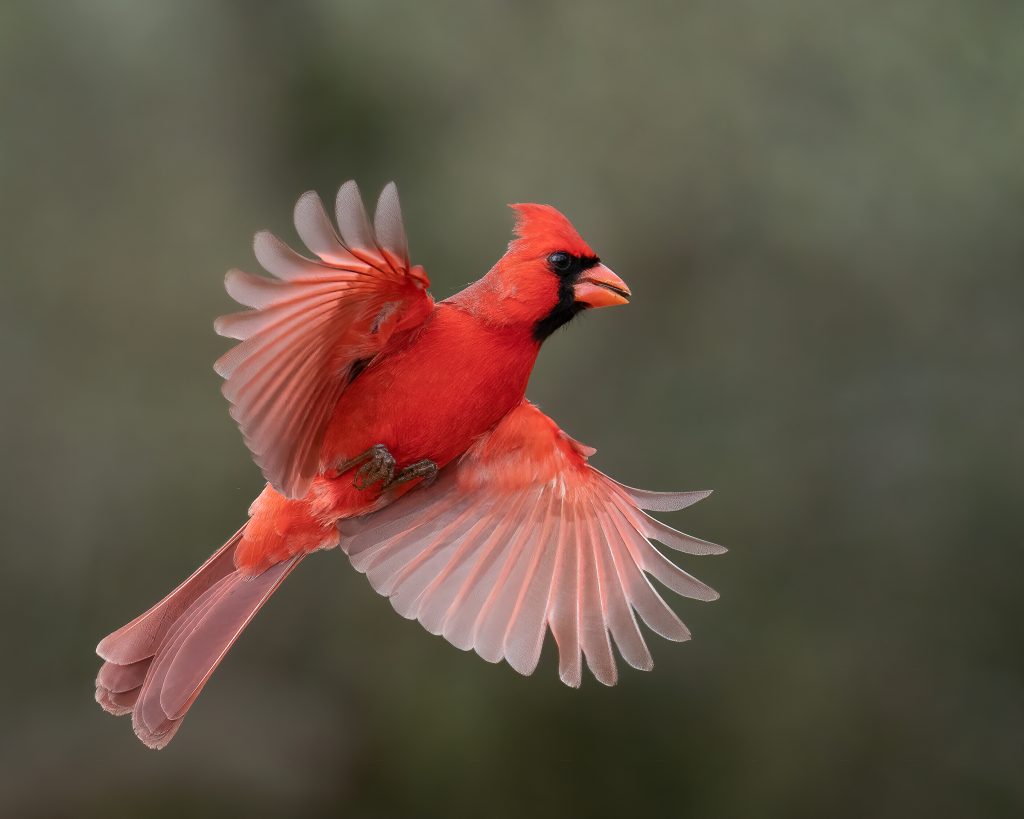 Meaning of Seeing Cardinals in Dreams

If you see a cardinal in your dreams, it should be viewed as a positive experience. Seeing a cardinal is a sign that you should follow your passions and dreams.

You need to be honest with yourself and learn more about who you really are to be happy in life.

These bright red birds might also be trying to give you the message that you need to accept your personal flaws and learn to love yourself just as God made you.

Cardinals in your dreams can signify that something unusual or particularly positive will occur shortly.

Cardinals are often viewed as symbols of the Holy Spirit, offering insurmountable life and energy.

Especially when viewed from the Christian or biblical worldview, cardinals are viewed as symbols of eternal life.

If you happen to see a female cardinal, in particular, this is a good sign. A sign that something positive will happen to you or that you are going to receive good news.

While female cardinals aren’t as brightly colored as their male counterparts, seeing them signifies that bright days are ahead.

It could also signify a spiritual message being sent to you by your loved ones in heaven.

They are sent to you to tell you that your loved ones are near and will always love you.

Cardinals should not be viewed as negative omens. When you happen to see them, either in real life or in your dreams, cardinals are positive.

You shouldn’t worry about seeing the – good things are headed your way!

Cardinals in Mythology and Folklore​

In folklore and mythology, cardinals are closely tied to the phoenix, a creature who itself has its fair share of variations and other tales.

The Egyptian version of the phoenix or red cardinal, for instance, is a red bird that lives in the deserts of Arabia.

The ancient Greeks believed the cardinal or phoenix to be the bird of the sun.

When the birds would sing, even the sun would pause to listen to the melody.

Because of this, it’s not hard to find yourself pausing as you listen to the melodious song of the phoenix.

Cardinals and The Holiday Season

Cardinals are figures of the holiday season for many cultures. With their bright red colors that stand out sharply against a fresh blanket of snow, it’s hard not to associate cardinals with the holidays!

Because of this, cardinals appear on countless Christmas items, from cards to ornaments to figurines and other decorations.

These are the most popular birds used in holiday decorations.

The male cardinal is viewed as a symbol of warmth and beauty during these cherished times.

Cardinal As Totem and Power Animal​s

Cardinals are often held as power animals or totem animals.

If you choose the cardinal as your spirit animal, it’s likely because you know how to listen to your own intuition and inner voice.

You can be quite sensitive, and you know how to make things happen – you are incredibly focused!

If the cardinal is your spirit animal, you likely handle leadership tasks with ease. You have a talent for self-promotion.

You enjoy new challenges and are detail-oriented.

Cardinals can be viewed as power animals, particularly for settling into new jobs or homes, and need guides along the way.

What is the Meaning of a Cardinal Tattoo?

When you’re trying to choose the right tattoo for your personality, it can be hard to find the right choice. The cardinal is a smart choice for just about everyone.

More often than not, a cardinal symbolizes the ideas of love, hope, passion, family, grace, nobility, and renewal.

Cardinals are wild animals, and because of this, they are most commonly included in tattoos in natural forms. They aren’t usually drawn in abstract or watercolor styles.

There is a great deal of realism associated with having a cardinal tattoo. They can symbolize having pride in your family and what you own.

Of course, they can also serve as reminders of loved ones who have passed or as holiday references. 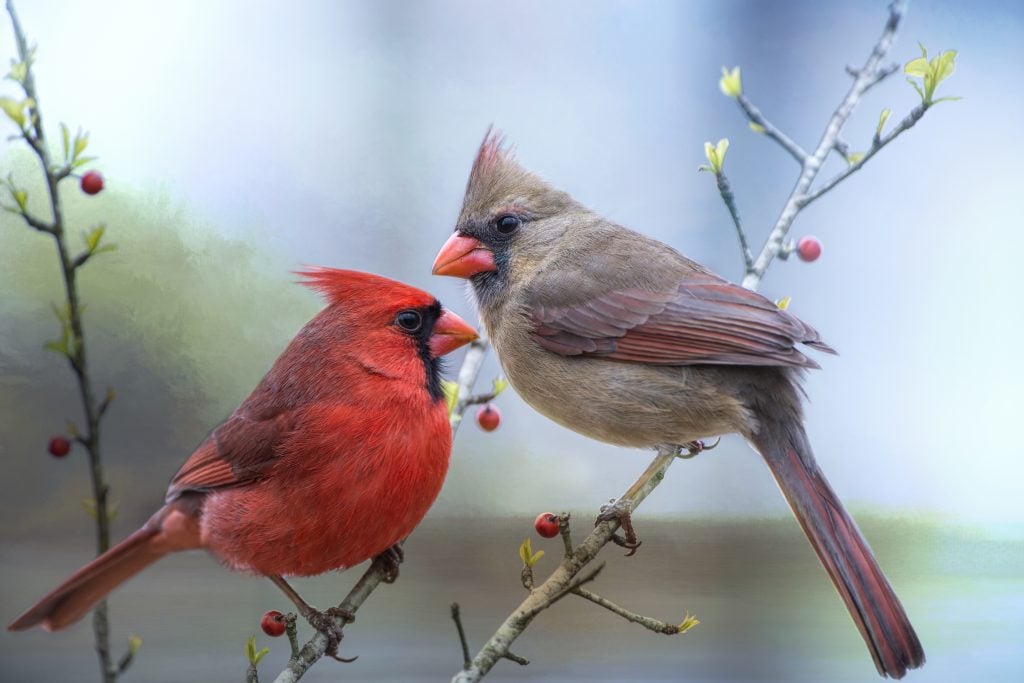 What is the Meaning of a Cardinal Appearing?

If you see a cardinal, you’re in luck – it’s not every day that you’ll notice these bright red beauties flitting around your yard!

Symbolic signs might appear to you in many forms. The bright red cardinal has often been viewed as the most notable spiritual messenger.

It’s a sign from your loved ones that they are watching over you. Many people report that, after experiencing the death of a loved one, they see cardinals more frequently.

There is even something known as “Cardinal Experience,” You see a red cardinal unexpectedly during a difficult time or perhaps during another momentous occasion.

If you recently suffered a loss and saw a cardinal, this is called a Cardinal Experience.  It’s something to be shared and cherished.

In some cases, people even view the sighting of a cardinal as a sign that you are pregnant. When seen at the start of a pregnancy, the cardinal is believed to serve as a spirit guide for the new parent to follow.

Is the Cardinal My Spirit Animal?

Is the cardinal your spirit animal? Well, if it is, then you likely have a strong sense of justice and are loyal to those who deserve loyalty.

You are also an idealistic person with high expectations for yourself and others.

People often view you as eccentric or offbeat. But that’s just because they don’t know what a true friend looks like!

Cardinals stand out among other birds, making a scene wherever they go.

If that sounds like you, then this bird could easily be considered your spirit animal.  Be sure to wave hello whenever you happen to cross paths! 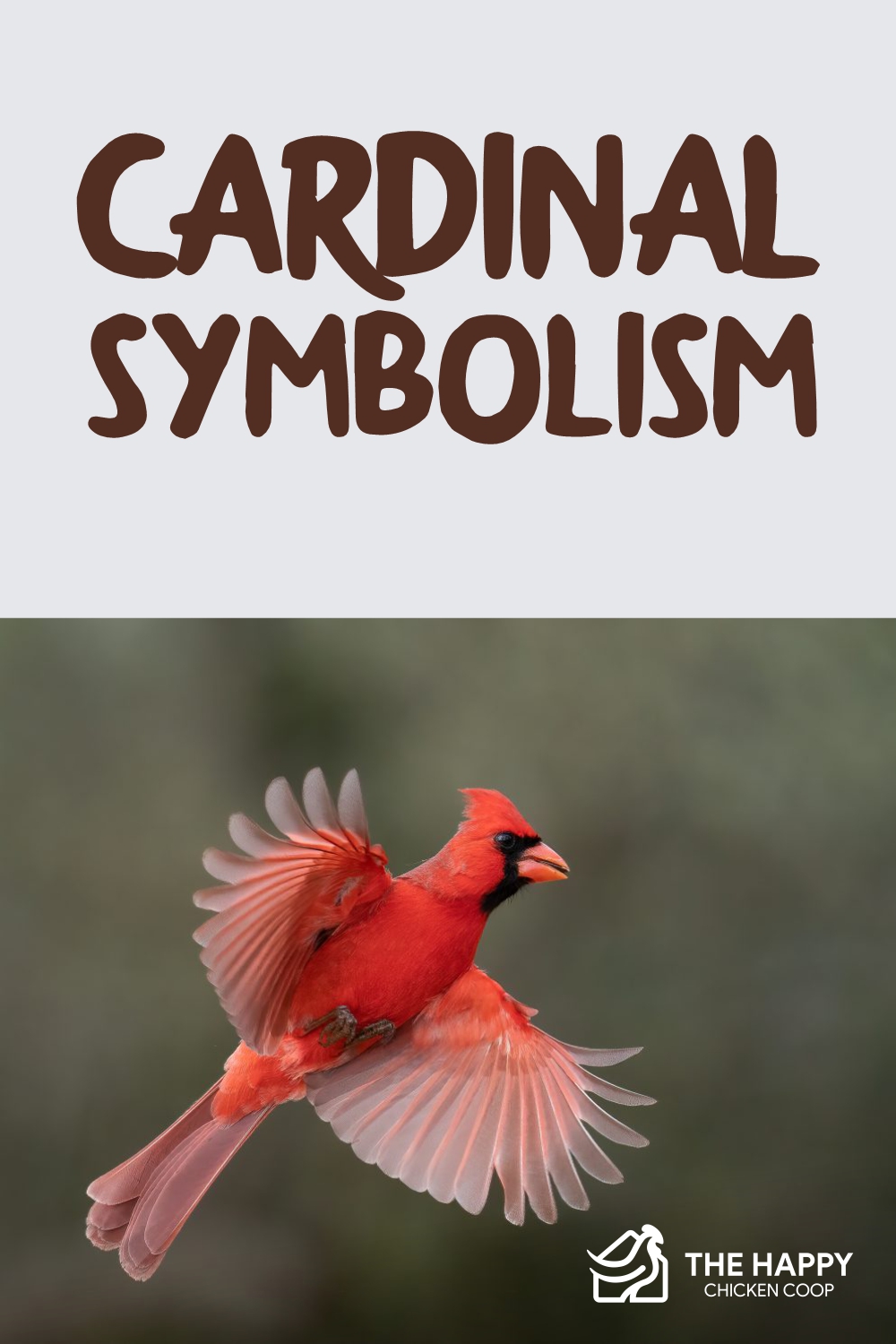