The 12 Daftest Things Ever Said About Backyard Chickens 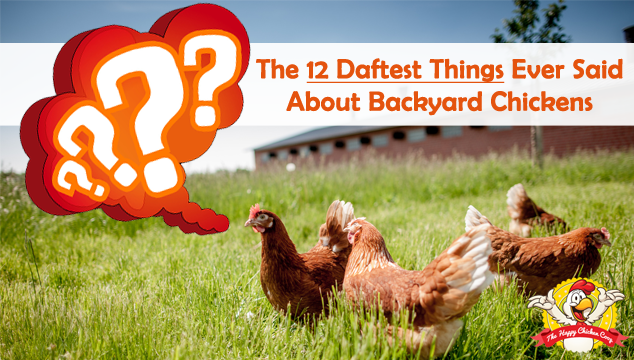 After the industrialization of farming post World War 2, many people became disconnected from the land, food and rural agricultural life in general. Times and practices were changing from a slower rural life, to a faster more industrialized city life.

This movement towards greater production was needed in order to provide food for everyone on a daily basis.

This had been amply demonstrated with the rationing of eggs and other products in England and Europe for many years even after the end of war.
The understanding of how an egg is made, where bacon comes from and the disappearance of the local butcher or farmer passed without much fanfare or sense of loss.

Now, not so many years later, more and more people are starting to re-embrace the land and farming knowledge that our forebears knew about. Much of this movement is driven by the desire to know how pure our food is, where it comes from and how humanely the animals have been treated.

Unfortunately, many ‘common sense’ items of knowledge got lost along the way as people became more divorced from their food source. As chicken keepers, we have either been shown or taught ourselves what it means to be a good flock keeper. We have all done our research, and we are still learning, and yes, we still do have the occasional ‘duh’ moment!

So, today we have put together the 12 daftest things ever said about backyard chickens. This post is for a bit of fun, but also to hopefully help educate about the misconceptions of chickens!

If you’ve kept chickens for any length of time you will know this is definitely not true.
As we know, they eat a great variety of bugs, creepy crawlies, small snakes, lizards and frogs. In fact, just about anything they can catch- whether or not it looks appetizing! In doing this they are returning the favor of keeping those pests out of our vegetable gardens and keeping bugs to a minimum level.

Whilst this may appear to be true, it’s because in the US it is government regulation that all eggs be cleaned prior to sale.
There are a couple of different methods to cleaning eggs. The simplest is to use a small scrubby sponge to remove dirt and light debris. To remove dirt from a more heavily soiled egg, regulation requires that the egg be washed under running water at least 20F greater than the temperature of the egg. You must use a ‘generally regarded as safe’ detergent or cleaning chemical to wash the egg and finally use a sanitizing spray on the egg.
Many backyard keepers do not wash their eggs unless they have been soiled; stating that removing the initial bloom of the egg is bad for the integrity of the egg.
Interestingly, in the UK eggs are not washed, they rely on the cuticle ‘bloom’ of the egg to maintain integrity.

3. Colored Eggs are From Roosters

This is one of my favorite myths!
Colored eggs or any egg which isn’t white comes for that matter comes from a rooster…
I’ve heard this several times now and my friends are in utter disbelief when I tell them that roosters don’t lay eggs.
Trying to persuade some people that they don’t is beyond impossible, for some reason the concept that roosters have to lay an egg is firmly fixed in their brains!

Definitely a big no.
Chickens have over 24 different vocalizations, they can recognize up to 30 people and they can grasp the concept of object impermanence- something a 4 year old child cannot.
Research conducted by the University of California has shown that chickens can think, apply logic, plan, have self- control and are quite numerate.
If you read through some of the research that has been conducted, you will be quietly proud of your ‘not so dumb’ chickens!

Many people are still getting to grips with the fact that white and brown eggs are nutritionally about the same, so it’s no surprise people are struggling with this one.
Green eggs aren’t moldy; it’s simply just the color of the shell.
The color of the egg is determined by the breed of the chicken. As the egg is travelling through the chickens’ oviduct it is dyed with the chickens own pigment- this can be blue, green, white, brown or pink!

6. I’m Not Eating Eggs from a Chicken That Ate Worms

As mentioned- chickens will eat just about anything and there is nothing like a great game of ‘tug o’ war’ with a fat juicy worm! Hens that are pastured enjoy a varied, nutritional diet, unlike their battery cage sisters who are caged every day of their short lives.
The extra protein of that worm goes towards making great eggs, keeping feathers and skin looking great and is good for the general overall health of you birds.

Many people talk about chickens as though they are all the same.
Hens and roosters get lumped together as though they are one!
Whilst many people complain that hens are noisy, it’s in fact roosters which produce the noise. This is why many towns and villages have ordinance against roosters.
If you purely keep backyard hens you will very rarely hear from them as they tend to just merrily cluck to themselves.

If anyone ever says this to you, be sure to never trust a word they say!
In the Middle Ages it was believed that roosters, did in fact, lay eggs. The offspring of these eggs would be known as a Cockatrice – an evil two legged dragon with a rooster’s head.
The only salvation was to destroy the egg, by throwing it over the roof of your family home. Fortunately, no sightings have been recorded since the Middle Ages!

There is a common held belief that store bought eggs are better for you- this is just not so.
Many studies done over the last two decades or so have indicated that backyard free-range chickens lay eggs that are far superior nutritionally.
These eggs are lower in cholesterol and saturated fats and way higher in vitamin A and E, also beta carotene to name a few.

How do you get eggs if you don’t have a rooster?
It’s a widely held belief that chickens can’t lay eggs without the presence of a rooster.
Fortunately for many of us backyard chicken keepers, this isn’t true.
Hens can in fact quite happily lay eggs without a rooster. A rooster is only needed if the eggs need fertilizing to hatch chicks.

Whilst it’s true that chickens can be smelly, this is usually the case when they aren’t properly cared for.
A good chicken owner will keep the coop clean of poop, put down fresh bedding and perhaps use sprinklings of fresh herbs to make the coop smell better.
All of these things help to reduce coop smells. You cannot blame the chicken for living in smelly, filthy conditions- you must blame the keeper!

12. Chickens Lay an Egg every Day

Whilst this certainly can be true, unfortunately for most of us it isn’t.
Certain breeds of chicken do lay more than others; however even the most prolific egg laying hen wont leg an egg every day.
As we know, a hen repeats her ovulation once about every 25-27 hours. So as wonderful as it would be to have more eggs, we can’t hurry up a good thing. Nature is infinitely more patient than we are!

All myths aside, many believe that all roosters are mean and nasty. The truth is, some roosters can be a lifesaver for your hens.
Roosters are gentlemen, and their main gig is to keep a watchful eye on their hens. They keep a lookout for predators while their hens are happily pecking away for grubs and other goodies.
Roosters also sound the alarm and warn their hens of impending doom from looming predators. Their crow can also deter a predator from attacking the flock. As a rooster crows, he may also puff up and flap his wings, making him appear larger and more threatening to predators.
Lastly, roosters are chivalrous….well, sort of. When it comes to ladies first, he will never overstep this golden rule.
For example, if a rooster finds a stash of yummy treats, instead of digging in first and keeping it all to himself, he will cluck lovingly to his hens, who come running. The rooster will pick up and drop the food to show the hens what he has found, and as they enjoy the bounty, he keeps an eye to the sky.
So, while some rooster can be aggressive, they can also be good for the flock. If you get a bad egg, don’t let him ruin your opinion of all roosters.
As you can see, there are plenty of misconceptions out there! And it is unfortunate that some people are intent on keeping these myths alive. In doing so, it prevents the average person from effectively helping to feed themselves and their family by raising their own backyard chickens.
It is important that we try to educate everyone on the benefits of raising/growing some of your own food. We may not be able to be totally self-sufficient, but the simple joy of obtaining fresh eggs from your own flock is very hard to beat.
We hope this has brought a smile to your face and the resolve to be an educating force on behalf of smart chickens everywhere!
Have fun and don’t forget to comment below with the daftest thing you’ve ever heard about backyard chickens! 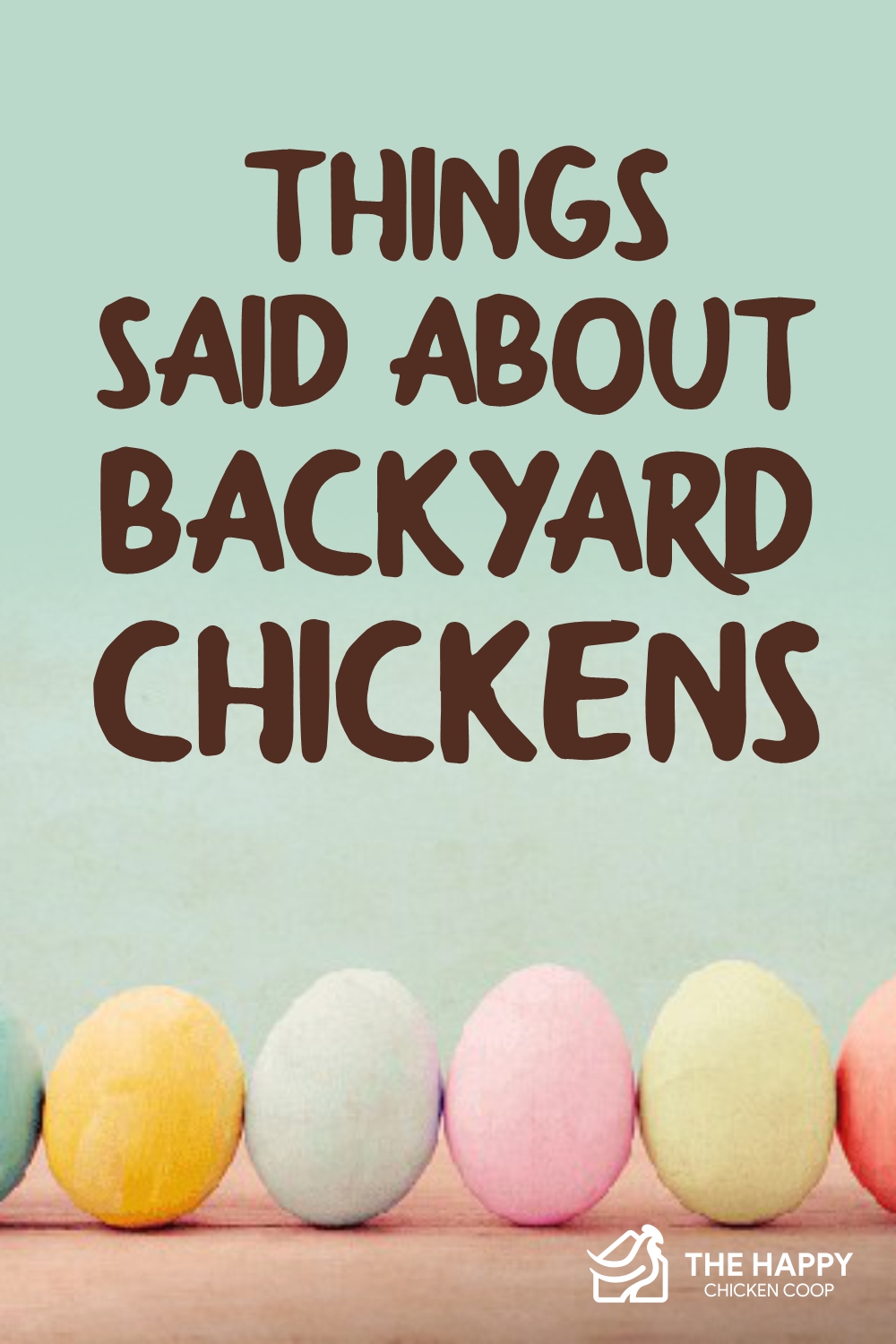