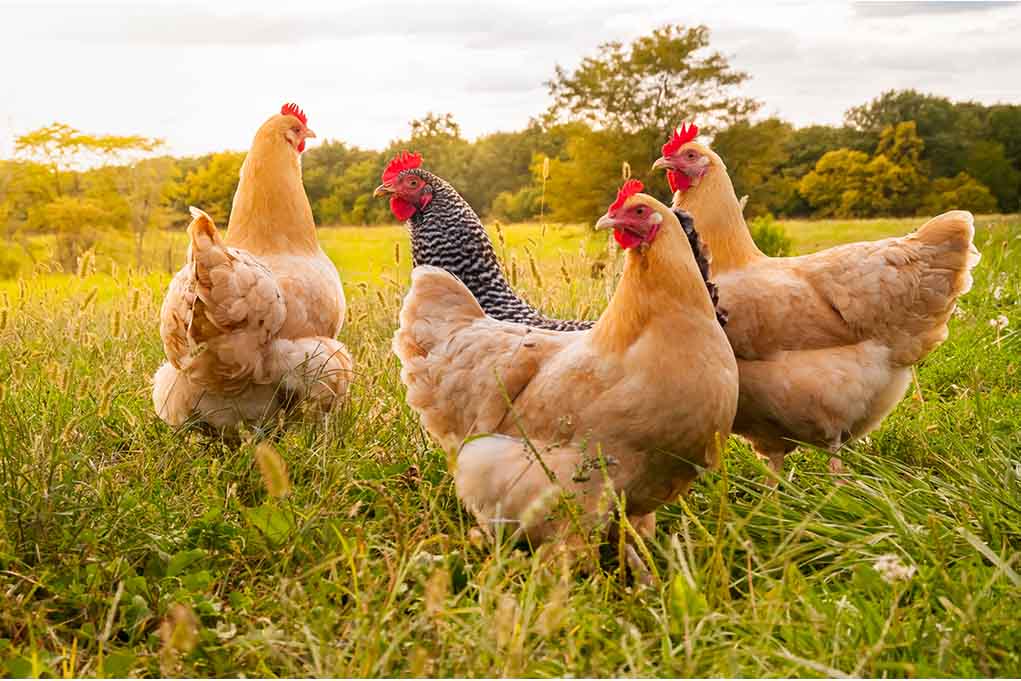 For those who have kept chickens for any length of time, we like to think we know all the facts about chickens. Like what time they rise for breakfast all the way through to their favorite things to eat (for ours, it’s worms)!

However, we’d bet that below we have compiled 20 surprising things even the most seasoned chicken-keeper wouldn’t know before reading this… 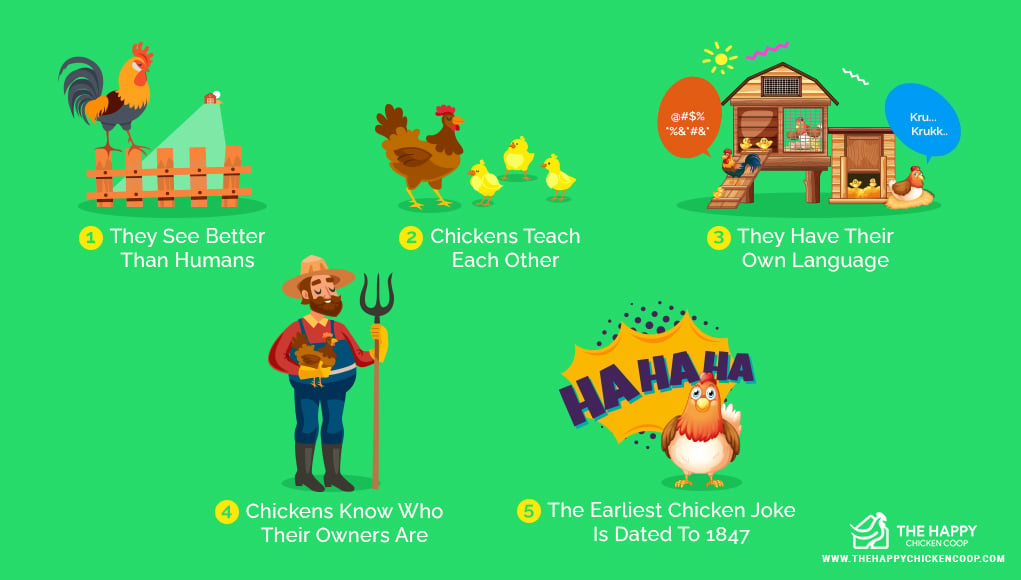 20 Chicken Facts That May Surprise You

#1 Fact About Chickens, They See Better Than Humans

It’s widely believed that chickens are color blind and have poor vision- this is not the case. They actually have better vision than humans.

Humans have three different cone types in their eyes, which means we can perceive red, green, and blue colors.

Whereas chickens have an additional two cone types, they can also distinguish violet and ultraviolet light.

Chickens Teach Each Other

So you thought it was only humans who taught their offspring? Nope, hens teach their chicks from a young age what they should and shouldn’t eat.

In a laboratory, scientists tested this and found that mother hens taught their chicks to avoid certain colored grains. [source]

Facts About Chickens, They Have Their Own Language

Chickens have over 30 unique noises they can produce- all of which are used for different purposes. Their clucks and crows are mostly used to raise the alarm for danger or food!

We say over 30 unique noises, but in reality, it’s probably much higher than this. However, so far, scientists have only tracked 30. [source]

Roosters, for example, have different vocalizations that alert their hens to newly discovered food items. He will cluck to them to tell them to stop by and have a snack, and as always, ladies first.

A rooster’s crow alarms hens of impending danger, but it can also be a way of communicating with their caretakers when they need something.

Roosters will also show his hens where he believes are the perfect nesting areas. He will snuggle into a small space and cluck lightly to his hens to showcase how and where they should nest.

Chickens Know Who Their Owners Are

Chickens can recognize up to one hundred human faces. This means it doesn’t take long to recognize who their owners are and who the nice person feeds them every morning.
In fact, many chicken owners even claim that their chickens can recognize their pet dogs- however, we haven’t introduced our dogs to the chickens yet… just in case!! 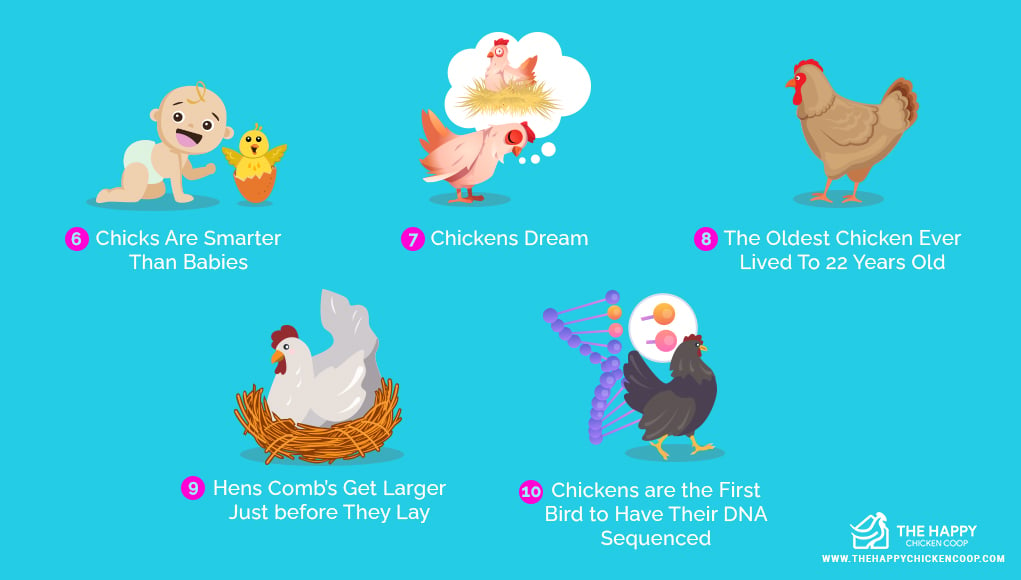 Fun Facts About Chickens: The Earliest Chicken Joke Is Dated To 1847

Chicks Are Smarter Than Babies: Facts About Chickens

Object permanence is the ability to understand that objects still exist even if they are not visible.
Human babies can typically grasp object permanence at around seven months- however, baby chicks develop this ability sometimes in as little as 2 days old. 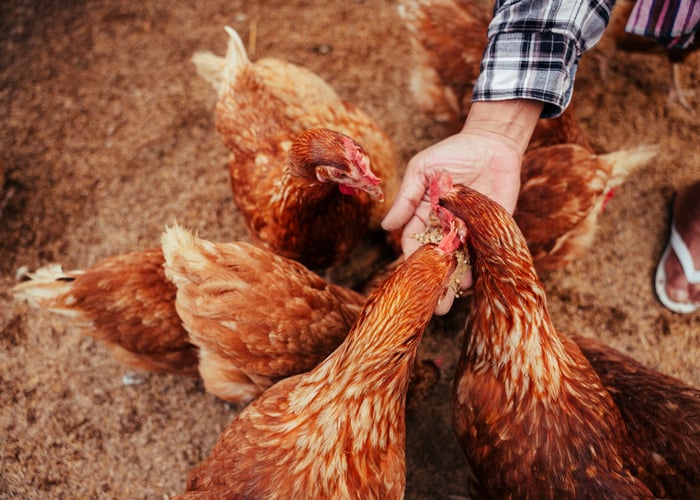 During REM sleep, we dream- we like to think that our chickens are dreaming about that nice fresh straw we’ve just lined their nesting box with.

Or, perhaps that lovely freshwater we’ve just filled their drinker with!

Record Breaking Facts About Chickens: The Oldest Chicken Ever Lived To 22 Years Old

The average chicken’s life expectancy is around 3 to 4 years due to its vulnerability to predators and diseases. However, well-cared-for backyard chickens can live to around double at 7-8 years.

However, Muffy, the oldest chicken ever, lived until she was 22 years old! Muffy was a Red Quill Muffed American Game born in Maryland.

Hens Comb’s Get Larger Just before They Lay

Hens give off numerous signs when they are ready to lay an egg. For instance, her comb will become a much more vivid red, and she will act more submissively.

Scientific Facts About Chickens, They Were the First Bird to Have Their DNA Sequenced

In 2004, the chicken genome was sequenced- making them the first birds to have their entire genome sequenced… 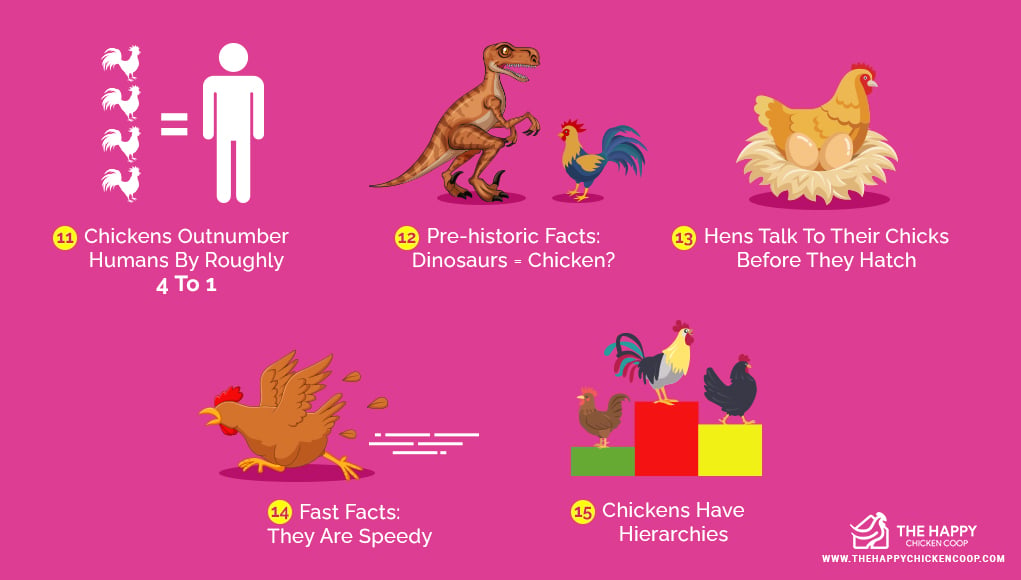 Chickens Outnumber Humans By Roughly 4 To 1

Not only does this make them the most common type of bird on the planet it also means they nearly outnumber humans by 4 to 1.

Chickens can be traced back to the theropods- a group of saurischian dinosaurs which date back to the late Triassic period (around 200 million years ago).

It’s strange to think, isn’t it, that those tiny little chickens in our backyard have evolved from something as dangerous as a T-Rex! [source] 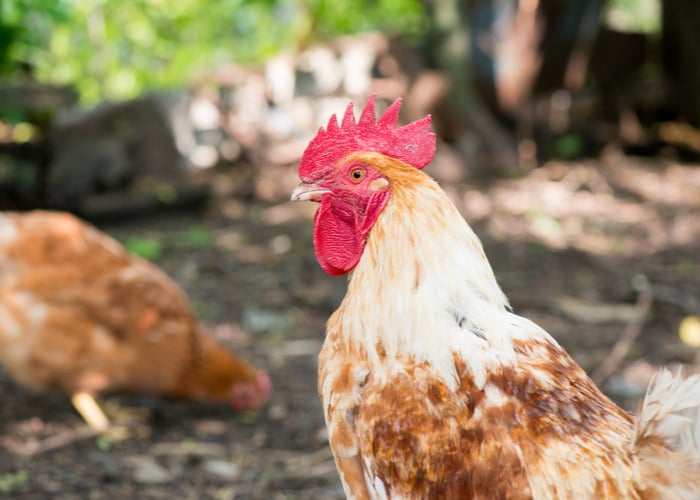 Hens Talk To Their Chicks before They Hatch

Did you know that hens ‘talk’ or cluck to their chicks whilst they are still in their eggs? As the chicks grow older and develop within the eggs, they also begin to peep and squeak back to their mum.

This helps the chicks to create a bond with their mother before they even hatch.
When chicks hatch, they know their mother’s voice and will follow it everywhere.

If you’ve allowed your hen to brood on her nest and hatch her own chicks, you’ve had the opportunity to witness an iron-clad relationship between mother hen and chick.

Those babies know their mum’s voice from day one.

How Fast Do Chickens Run? They Are Speedy

Ok, if you’ve ever tried to round chickens up, you already know just how fast they are. I remember the first time I tried chasing the chickens into their coop.

An hour later, they were still merrily clucking outside!!

But do you know how fast chickens can run?

They can get up to 9mph for short bursts, but chickens’ real advantage comes in their agility- they can turn on a six-pence.

This speedy and agility really helps keep them safe from predators- or helps them avoid us when we are trying to round them up back into their coop.

In fact, if you introduce two flocks of chickens together, they will normally joust each other to determine this order.

If you watch hens closely, they will feed close to the most dominant roosters because he will protect them. 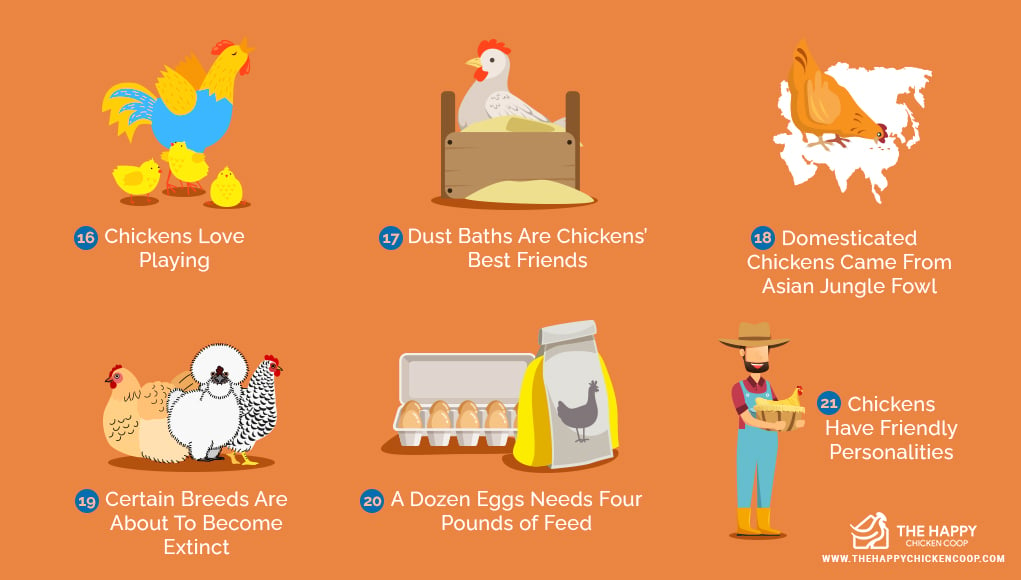 But Do Chickens Play? Yes!

If you keep chickens in your backyard, you will certainly know this. Before I had chickens when I visited my friend and her chickens, sometimes it looked like the chickens were playing games.

So I obviously asked myself, “do chickens play?”.

If you have never seen free-range chickens, this fact might surprise you…

Chickens spend much of their day running, scraping, and jousting other chickens.

In any chicken pen, you will see huge chicken-sized holes in the ground- have you ever wondered what they are for?

Chickens love to dig down into the ground and create themselves a ‘dust’ bath. They do this to keep themselves clean and also during the summer to try and cool down.

Many researchers now believe that the domesticated chickens we keep in our backyard originate from Asian jungle fowl.

Unfortunately, historically, this jungle fowl was first domesticated for cockfighting.

Fortunately, cockfighting is now banned in many countries throughout the world. [source]

Sad Facts About Chickens is That Certain Breeds Are About To Become Extinct.

Although some 25 billion chickens are alive today- more traditional breeds are increasingly at risk of becoming extinct.

If you are interested in seeing which breeds are at risk, visit the American Livestock Breeds Conservancy.

For a normal hen to lay 12 eggs, they need to consume roughly four pounds of feed.

Some people think chickens are never to be considered pets. On the contrary, many breeds are friendlier than other breeds.

And even within certain breeds, the rule always has an exception.

Some, who have experienced the companionship of a friendly chicken, have begun bringing chickens into nursing homes and schools to provide therapy or companionship.

Some chickens enjoy being held and are tame enough to help others who need a boost.

Well, it’s not so much as a bite as it is a peck. But the majority of chickens aren’t aggressive towards humans.

Roosters are known for going rogue on their human companions. Hens are only defensive when they feel like their offspring is threatened: chicks and eggs.

You’ll get a peck or two when they are broody, and you try and take the eggs they are sitting on.

No, as we said earlier that the belief that chickens are colorblind and have poor vision is completely false.

So these are our favorite facts about chickens that we didn’t know before writing this article. Leave us a comment below with an interesting fact about chickens you think we won’t know! 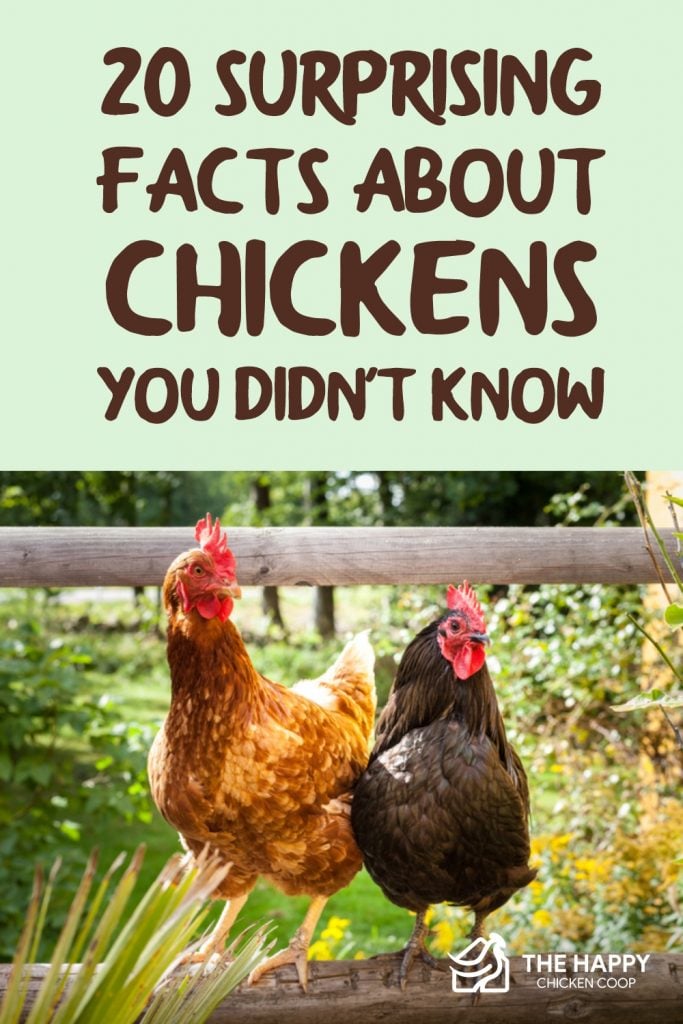