Blue Orpington Chicken Breed: Everything You Need to Know 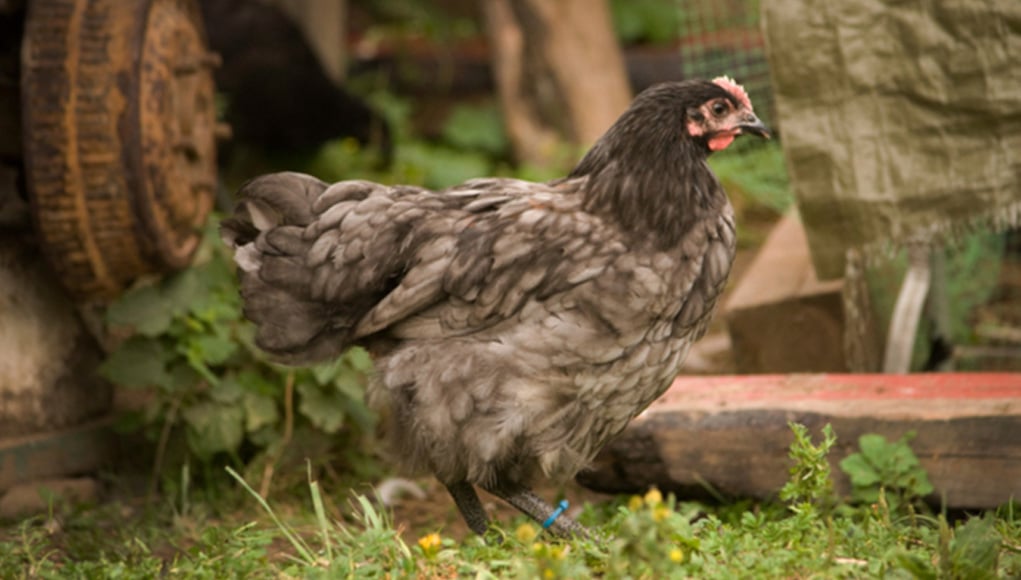 Are you in search of a gorgeous Blue Orpington chicken breed?

With its pulchritudinous blue feathers, docile disposition, and excellent maternal instincts, the Blue Orpington can easily top the list of hatchery favorites.

If you’re planning to add this breed to your flock, have you ever wondered if it’s right for you?

In this article, we’ll talk about the following:

To help you weigh in if a Blue Orpington suits your needs and preferences.

But before that, here’s a little flashback on the history of these fantastic birds. 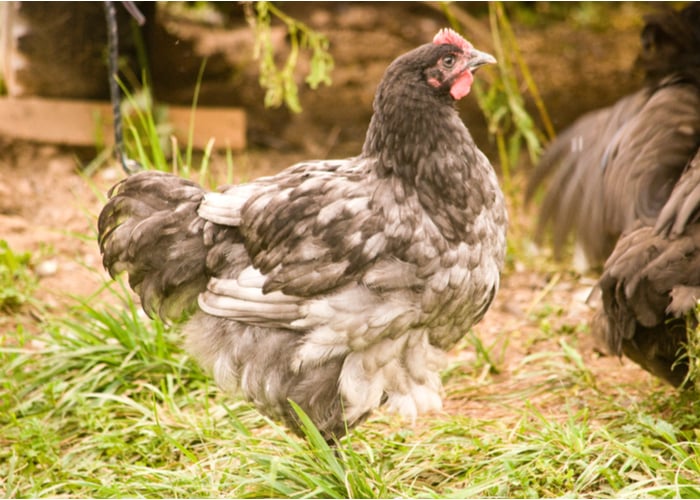 Did you know that Orpington chickens were developed in late 1886 when the ‘chicken fever’ in Great Britain was slowly dying down?

Its name was derived from the hometown of William Cook, the coachman who was behind the development of this breed.

The first breed was created by crossbreeding the Black Plymouth Rock and Minorca, the Black Orpington.

Then its offspring were also bred with clean-legged Langshans, which came from China.

Cook practically made this breed to produce a good layer of egg and meat for good table fare.

He also developed the Black Orpington breed because he wanted a chicken that didn’t show dirt and soot.

But he’s gone through different mixing of the original Orpington with other breeds like Hamburgs and Dorkings before successfully creating the beautiful variations we know today, including the Blue and Lavender Orpington.

This Blue Orpington was a product of a Black and White variety in the year 1973.

His unorthodox method brought him lots of criticism before.

But thanks to him and such a method, we have come to learn about this beautiful breed of chicken.

But the Blue Orpington didn’t have much popularity until an Andalusian gene was added to improve the breed.

And later, it gained fame in America when it was exhibited in Madison Square Garden.

In 1902, the American poultry Association officially admitted this breed and became the chicken keeper’s favorite. 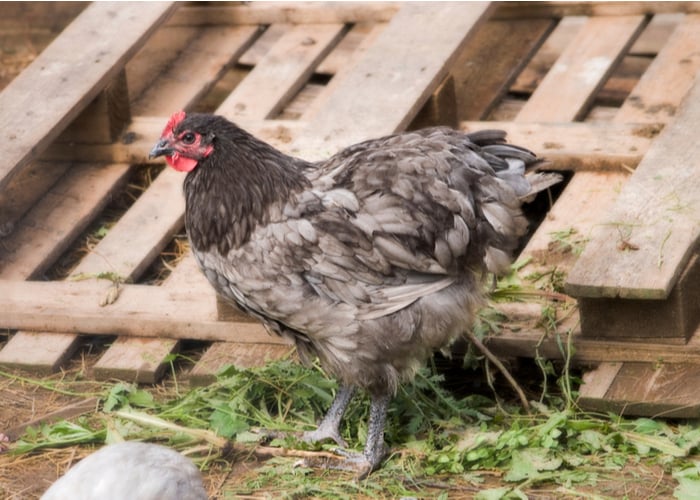 Blue Orpington chicken is among the famous varieties of Orpingtons.

It’s as beautiful as its lavender and buff-colored counterparts.

This variety remained rare in every poultry industry up to this day.

It appears to have a bluish-grey color (sometimes slate blue with dark purple), thick and broad feathers that could cover its legs up to its feet.

This feather gives them protection by keeping them warm when the winter season comes.

They have short legs and compact heads that make them look heavy and short, making them unable to fly.

The wings and tail are somewhat short or small, which is covered by a thick feather.

Its body is broad and can form a heart-shaped when it is a view on its side.

It also has a broad and well-rounded breast, a strong beak, and large and bold eyes.

However, it comes in two different sizes, the regular and the bantam.

The Roaster Orpington weighs up to 10 pounds, while the hen is 8 pounds.

Based on Mendel’s law of inheritance, every offspring receives a gene from each parent.

In terms of blue coloring, it can be created by combining black(BB) and splash(bb) chicken parents.

Black is the dominant gene, while splash is the recessive one.

Their offspring will receive a gene from each parent, and they usually come out 100% Blue.

In this case, 50% of their offspring will likely be blue, and 25% of them will be black, while 25% will be splash-colored.

That’s how blue poultry genetics work; breeding Blues with each other won’t hatch out to be 100% blue.

The same thing happens with blue-laced varieties and blue ducks.

If you breed a blue and splash chicken, the offspring will be 50% blue and 50% splash.

But if you’d combine black and blue, their chicks will likely be 50% black and 50% blue.

On the other hand, breeding Splash chickens together can give you 100% Splash chicks, while combining two black Orpingtongs can produce 100% black offsprings.

But have you ever wondered why not all Blue Orpingtons are exactly the same?

Blue is a dilute color due to the black and splash combination.

That’s why the blue coloring varies in each chick.

Some blues are light-colored while others are dark, sometimes dark enough to be mistaken as black chicks.

To summit up, here’s a chart that’ll show you how you can get a blue-feathered Orpington chicken.

Blue Orpington have excellent egg-laying capabilities since they can produce at least 200 eggs per year.

But others can give you as much as 280 eggs in a year.

Therefore, you can save a considerable feeding and housing cost.

They even go as far as helping other chickens by hatching their egg.

On top of that, they possess a friendly and docile disposition, making them a top choice for many.

These sweet birds also find joy in cuddling with their owners.

And the Orpington roosters are reliable protectors who even guard the nest when the brooding hen is out to have a break.

Blue Orpingtons are generally healthy, but they are prone to lice and mites because of their dense feathering.

Therefore, you’ll need to check its plumage and skin regularly should you decide to get an Orpington for yourself.

This way, you can save your beloved feathery friend from parasite infestation.

It’s also prone to obesity due to heavy feeding and its rapid growth rate.

So, you have to ensure that it can get the exercise it needs to decrease the risks of diabetes.

It would be best to consult vets to get them inspected for signs of bumblefoot, spraddle leg, and impacted crop and prevent these conditions’ occurrence.

Is The Blue Orpington Chicken Breed The Best Breed for You?

If you want a prolific egg layer, docile breed, an excellent table bird, Blue Orpington is the right breed for you.

Not to mention its eye-pleasing blue plumage and unique feathering pattern.

It has everything you could ever need.

So if you want to go with a beautiful bird that doesn’t require you to sacrifice the egg production and meat quality, the Blue Orpingtons would be great for you.

What is a Blue Orpington chicken?

It is the blue variety of the Orpington chicken breed, which sports aesthetical blue or splash plumage.

Blue Orpington made its way to the chicken world in 1910.

It wasn’t famous back then, but it enjoyed a boost in popularity when the Andalusian plumage gene was added to help improve and promote the breed.

These gorgeous chickens are very rare, and it’s an in-demand variety right now.

Who wouldn’t want this kind of Orpington, though?

Their beautiful feathering, robust health, and calm temperament make it a complete package and an easy favorite.

Blue Orpington chickens lay off white to light pink or brown eggs. You wouldn’t get a blue egg from this variety, but its eggs are still visually pleasing.

Is a Blue Orpington chicken breed a good layer?

A Blue Orpington can give you about 230 eggs in their first years, but older ones can produce 280 eggs per year.

Therefore, they can be considered goo layers.

Like the Wyandotte breed, Blue Orpingtons can fly about 1 foot above the ground for a short distance despite their heavy body.

But their wings can’t give them the power needed to lift themselves.

This Orpington variety is broody, but it may not be the one for you if you don’t want a broody hen.

But they generally have a sweet, friendly, and calm disposition, and they’re notably good-looking, making them an ideal pet even for beginner bird owners.

They’re both reliable egg-layers, and they can also pass as a good table bird, and when cared for properly, they can live up to 7 years.

So, if those qualities are what you’re looking for in a bird, the Blue Orpington chicken breed is the way to go.

It has everything you could ever want in a chicken pet.

READ NEXT: Buff Orpington All You Need To Know: Temperament and Egg Laying 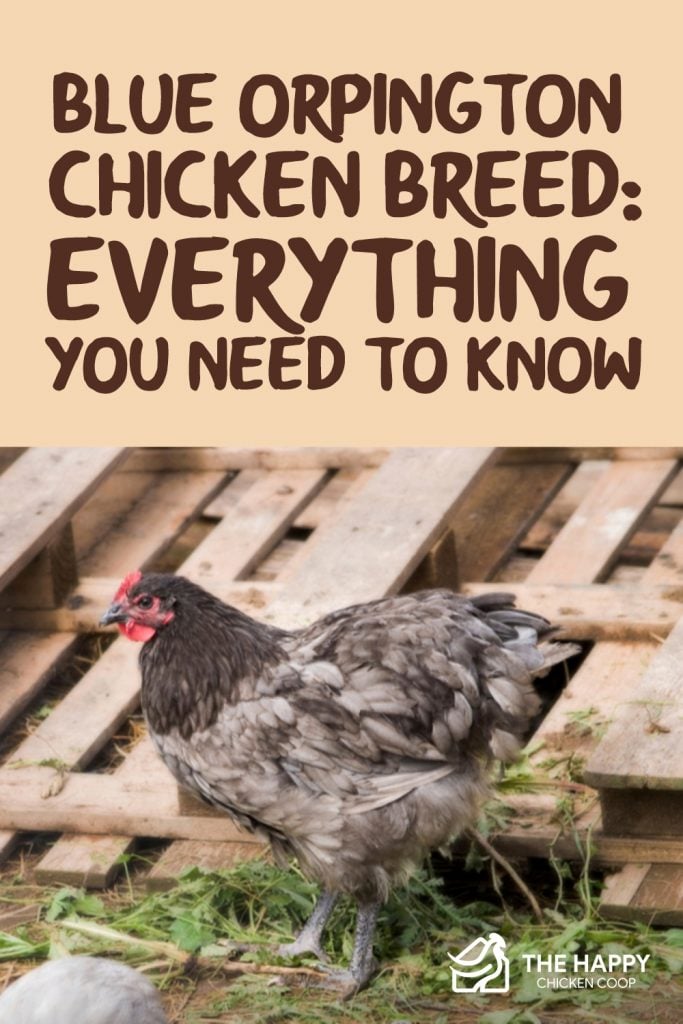