Old English Game Chicken — Everything You Need To Know

Can you recognize an Old English Game chicken?

This fierce, powerful chicken breed exudes a strong disposition and indomitable spirit, and they were once the dark aces in cockfighting.

No wonder why they drew many poultry breeders to this breed.

And the fact that you’re here means something has drawn you into this unfathomable breed too.

But do you think this chicken breed is an excellent addition to your flock?

In this guide to Old English Game’s world, we’re going to discuss:

So, whether you’re a potential OEG (an abbreviation for Old English Game) owner or just a fan of this stock who’s trying to get to know different breeds, you’ll benefit from this article.

Without further ado, join us as we take a glimpse of the Old English Game’s history and personality. 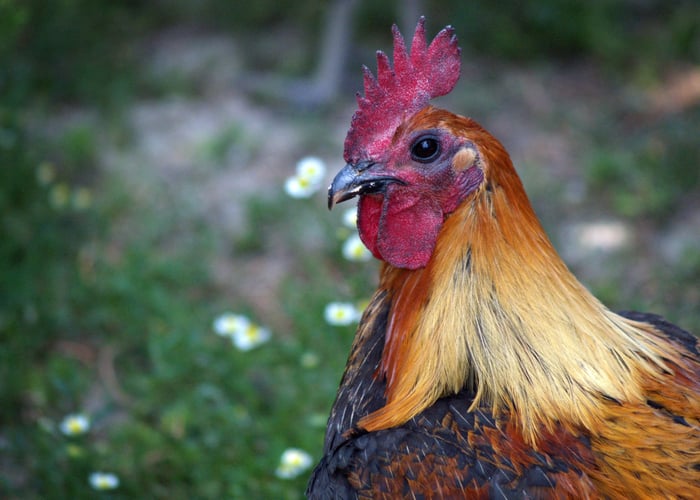 The Old English Game fowl is a direct descendant of the popular fighting breed – the Pit Game.

As its name suggests, it is among the oldest poultry breeds and the first chicken breed developed in Britain.

The Old English Game chickens were sold for a high price and were much sought after by poultry farmers.

They mainly bred Standard Old English Game roosters for cockfighting in the past.

The Romans were the ones who brought game fowl to England in the first century A.D., kicking off a long history of cockfighting for sport in England.

Since it was a low-cost sport, it drew people from all walks of life.

They even introduced this sport to Britain’s public schools in the early 1800s.

They hoped to teach and inspire young people about the endurance, strength, and courage demonstrated by fighting cocks.

However, things had changed when the government banned cockfighting in England in 1849.

The once sought-after breed lost its glory and became less patronized.

While it’s sad that some people started sleeping on this chicken breed, poultry farmers kept the breed for poultry shows and tried to improve the stock.

And they had a huge contribution to other breeds, making them worth noting in the world of cockfighting.

This breed is more than just a symbol of strength and endurance.

OEGs were also famous for their beautiful figure and colorful plumage.

They have explicitly evolved for their previous life in the ring and had a compact, muscular build, broad shoulders, and stiff, glossy feathers.

To prevent a competitor from seizing the feathers in the beak, they are tightly bound to the body.

Due to their excellent muscle distribution, they’re also great for meat production.

Male game’s combs and wattles are trimmed early in life in a process called dubbing.

But this practice is now slowly going out of fashion.

Both sexes’ tail feathers are broad and strong, making the tails vast and unique, especially the male’s curving tail feathers.

This breed has white skin color, but it comes in a range of striking color varieties, including the following:

But if we would be technical, there are actually two main types of Old English Game chickens.

The Oxford Old English Game is more active and long-tailed, and their back forms 45º with the ground.

They come in 30 different color varieties, and their rooster’s weight ranges from 1.8 – 2.5 kg, while their hen averages at 1.4 kg.

On the other hand, the Carlisles are slightly larger and beefier with large breasts and horizontal backs.

They’re more muscled, and they stand closer to the ground.

There are 13 color varieties of Carlisles, which is a bit handful, but less than Oxford.

As you probably noticed, this breed is aggressive and noisy. It’s also known for being alert, active, confident, and upright.

That explains why they’ve been ideal for cockfighting.

However, the downside of their personality is you can’t keep them with other docile breeds due to their aggressive nature.

The roosters are territorial, and they won’t hesitate to fight against invaders.

That’s why it’s best to keep roosters apart after six months of age.

The roosters will battle to the death if they are kept together.

Although some chicken may have a softer side and goes along with others, it will be better to separate them from other docile breeds if you want a peaceful flock.

OEG hens are fair layers that are usually reliable brooders.

If they’re not broody, they can usually produce two cream or tinted eggs a week.

But when they go broody, they can be excellent and protective mothers to their chicks.

Like their parents, Old English Game chicks have a fighting nature even at a young age, and they slowly mature.

OEG chickens are hardy in winter, which means that this breed can endure cold days outside.

However, they have low heat tolerance, so they’re not especially heat-hardy.

Additionally, these fighter birds will not be happy with a small yard surrounded by fences since they’re intolerant of confinement.

They’ll be more comfortable to be in a wide area where they can forage and explore.

They also love to roost in trees, and keeping them in a cage can cause them distress.

Game chickens are long-living birds with an average lifespan of 15 years or more.

So, if you’re looking for a fighter chicken breed with a long lifespan, this bird might suit you.

However, there are many things to consider when purchasing an Old English Game.

Let’s talk about it to know if this breed is really for you. 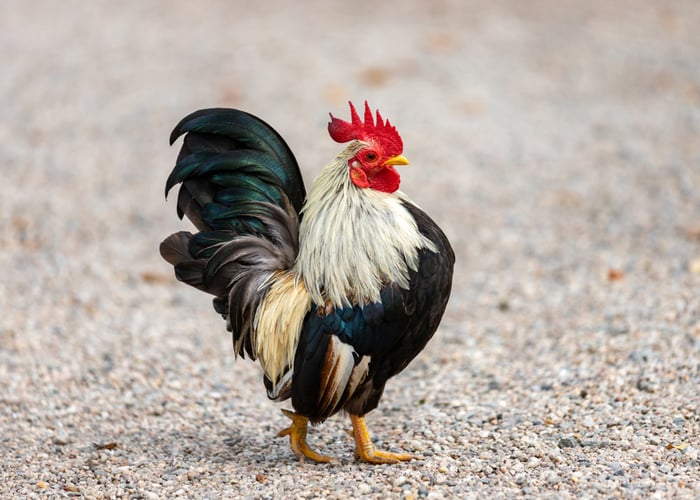 Is the Old English Chicken the Right Breed for You?

But since they’re aggressive with fellow birds and fierce fighters, they’re best separated from other chickens.

However, this may vary since some OEG chickens are docile and gentle, especially the Bantam variety.

On top of that, they’re cost-effective because they have low feed consumption and forage a lot.

If you’re a newbie chicken owner and you want a tough-looking but more docile breed, the Old English Game Bantams may make a better choice.

If you plan to add the standard Old English Game to your flock, make sure you already have chicken experience under your belt.

But if you prefer active and alert birds who can endure extreme winter temperatures and are confident in runways, and you have the experience needed to handle them, they’ll suit you.

Now, if you have finally made up your mind about purchasing an OEG, here are some care tips to ensure your new addition to your flock will be happy.

Chickens ownership comes with the responsibility of taking care of the regular basis.

Although Old English Game chickens are foragers, they’ll surely be glad if you could provide them or do the following every day.

Give them clean water and refill it.

Every chicken needs a clean freshwater source since they don’t like dirty ones and might suffer from dehydration if they don’t have it.

So, it’s essential to clean the waterers when there are debris and sliminess in them.

Straws, poop, and shavings can also get into it.

So to ensure their container is clean and free from bacteria, clean it with dish soap, then rinse it well with water before refilling.

You may also use chlorine or oxygen bleach as an alternative to sanitize their container and rinse it thoroughly.

Free feed them as needed.

OEG’s forage a lot, but they still need some chicken feed every day.

You can provide food for them through a large hanging feeder or allot a fixed amount each day.

Look after them and observe their health.

To make sure your OEG birds are healthy, you must observe them and watch for sickness signs like discharge and feather loss.

You’ll know if your Old English Game chickens are healthy if they have bright eyes and smooth feathers and if they’re alert and active.

Glorious cockfighting days of Old English Game may be over.

But they still have an ardent following among poultry fanciers in this modern era.

Aside from being ornamental birds, they also make a decent meal on the table and lay eggs well.

So even if they’re vigorous and typically aggressive, this multi-purpose chicken breed can still be a good addition to your flock. 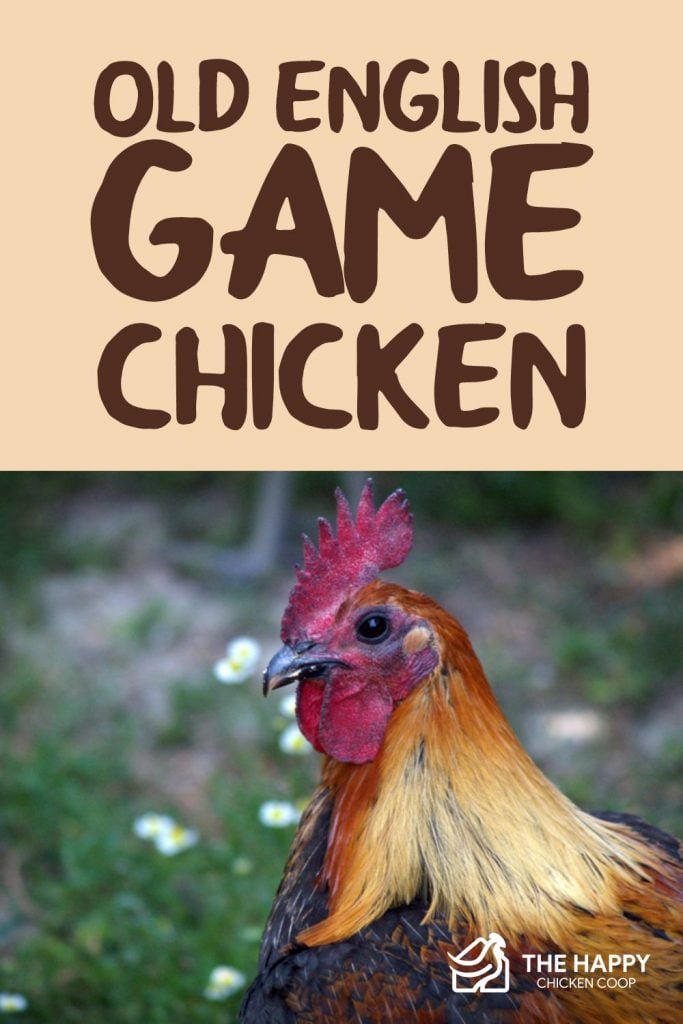