Rouen Duck Breed: Everything You Need To Know 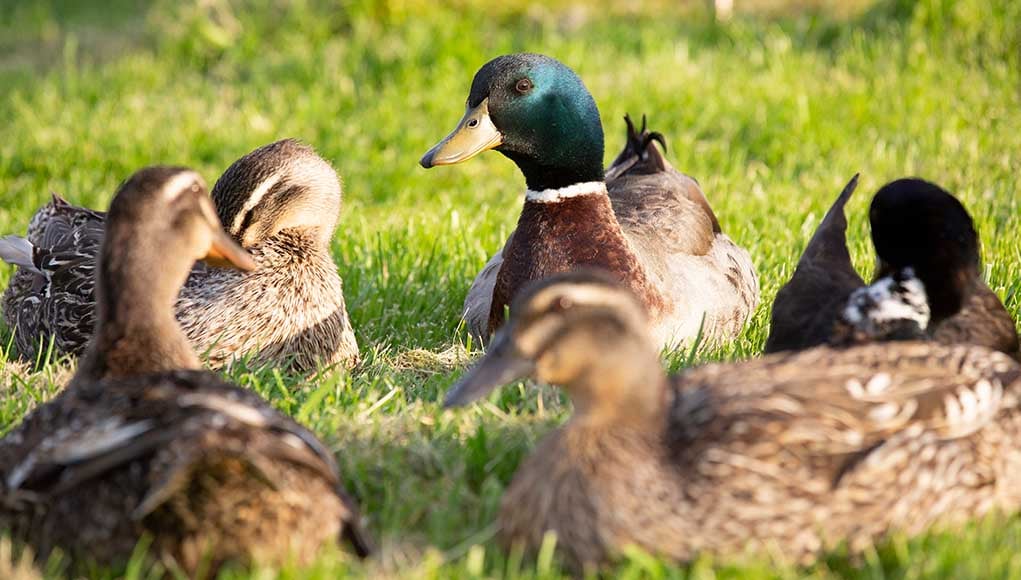 The Rouen duck breed is a domesticated duck. They are typically raised for meat, for exhibition, and as a pet. They are considered a heavyweight breed of duck.

These ducks aren’t the best layers around. But they do offer a charismatic appeal to any backyard flock.

If you’re new to raising ducks – or perhaps want to add on to your existing flock with a new, fun-loving breed – you may want to consider the Rouen duck breed.

In this article, we’ll tell you everything you need to know! 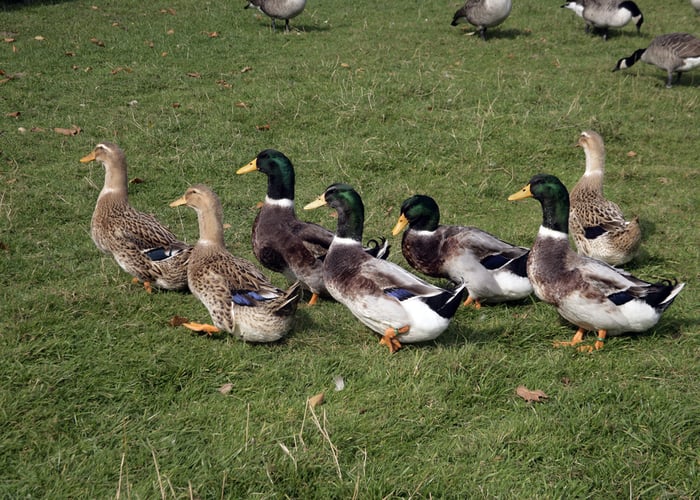 History of the Rouen Duck Breed

Though this breed originated in France, the Rouen duck breed didn’t really start to gain traction until it was introduced to England in the 1800s.

Here, it was further refined from its early, rudimentary version into the breed that we recognize as the modern Rouen.

Originally, the first Rouens looked much like Mallards, both in size and in coloring.

It was only through selective breeding in England that breeders bred the ducks into a larger individual with more refined markings and a deeper, longer keel.

It’s unknown how and where the Rouen name came about. Likely, it is an evolution of the name that occurred gradually over time.

When the ducks first came to Britain, they were called Rhone, after a region in southwest France, Rohan (a call out to the cardinal of the same name) Roan, after the diverse blend of colors represented in the breed’s plague, and Rouen, after a town in northern France.

Of course, Rouen was the name that eventually stuck. While most people refer to these ducks now as Rouen ducks, in France, there are two names – Rouen Fonce, which is dark in color, and Rouen Clair, a lighter variant.

These ducks were not brought to the United States until 1850, brought here by D.W. Lincoln of Massachusetts. They were used as all-purpose farm ducks until they rose to popularity in the show arena.

They were included by the American Poultry Association in the Standard of Perfection a couple of decades later and now are the most popular ducks among the other heavyweight breeds. 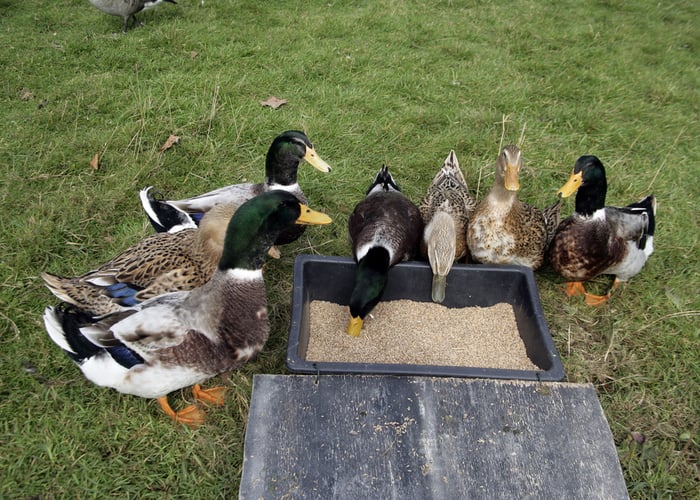 Rouen ducks are prized for their docile, easygoing nature. They are vigorous and healthy.

Rouens are quite calm, with the word “majestic” used by many hatcheries to describe them. As waterfowl, they need water and require lots of space to walk around and forage on dry land.

When allowed to forage and free-range, these ducks are content and easy to care for.

They are not good fliers since they are so large. Therefore, you likely won’t need to worry about super-tall fences to contain them and prevent them from flying away.

Of course, make sure your duck housing and run are both secure against predators.

Since these ducks aren’t particularly quick-moving, you need to make sure there are systems in place to keep them safe from harm.

If you’ve ever raised Mallards, you’ll find that Rouens are quite similar in all aspects but one – they are extremely calm and lazy!

Rouens tend to be quiet, not making much of a fuss about anything. They are slow growers that take their time in everything they do.

Occasionally, male Rouen duck can be a bit aggressive. When they guard a nest – they will chase down anyone near the hen and her territory.

Rouen ducks come in two distinct shapes and sizes. The Standard is a large duck that can weigh up to ten pounds, possessing a horizontal carriage with a large, stocky body and a deep and level keel. It has a round head and a medium-size, concave bill.

Production Rouens, on the other hand, is about two pounds lighter, generally only weighing seven or eight pounds. These ducks have a slimmer, sleeker appearance and are more upright in posture.

The Rouen drake has lovely plumage that is similar to that of a Mallard drake. It has a deep yellow bill, orange feet and shanks, and dark black eyes. The upper neck, tail, and head of this duck are an emerald green color, while the lower neck and breast are dark brown.

The rest of the body is various shades of grey except for a white band that circles the neck and diagonal white and blue crosses on the wings.

Female Rouen Ducks tend to be a beautiful shade of mahogany, with brown crowns and tan eye stripes that extend from the back of the eyes and down the bill.

Although female Rouens are often confused with female Mallards, the key difference between the two is that Rouens are usually a much darker brown.

Both species, however, have bright blue speculum feathers, though Rouens are larger and brighter in color. Female Rouens also have distinct penciling patterns on many of the head, neck, body, wing, and tail feathers.

Rouen ducklings are easy to tell apart from Mallards, too, since they have a second stripe that runs across the face, just beneath the eye.

Otherwise, the plumage coloring is similar. Adult Rouens are much larger than Mallards as well.

There are several other color variations of this breed that you may see from time to time, too. Breeders have exhibited various options like Pastel, Fawn, Blue, and Black, but these are not yet accepted or recognized by the American Poultry Association.

Rouens are unique in that they can see color and can see extremely well underwater. 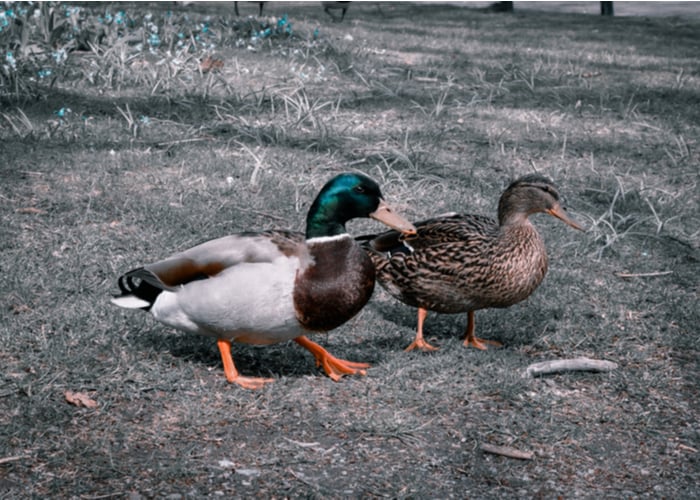 The average lifespan of a Rouen duck will vary depending on the conditions in which it is raised and what purpose it is being raised for. Obviously, if you are raising Rouen ducks for meat, you aren’t going to let your ducks get much older than a year or so old!

However, if raised for exhibition purposes and given the best possible care, it is entirely likely that your Rouen ducks can live up to eight to twelve years. 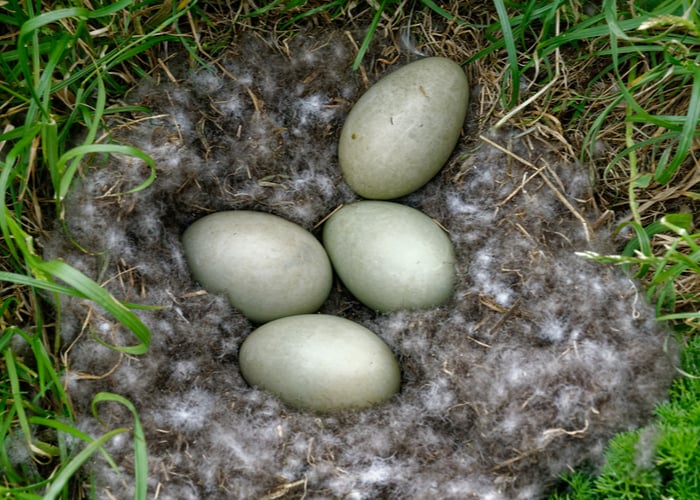 Unfortunately, Rouen ducks are not the best breed to raise if you hope to raise ducks for eggs. That’s because it is somewhat unreliable when it comes to its laying habits.

Although some females can lay up to 125 eggs each year, many lay just 35 to 50. These eggs tend to be white but occasionally have green and blue tinting, so they are not plentiful in number while they are attractive.

Another disadvantage of raising Rouen ducks for eggs is that the females tend to crush the eggs when they set on them since their frames are so massive.

It takes quite a while for Rouen ducks to reach maturity for egg-laying purposes, too. It might take seven to ten months before you see a single egg.

The average clutch size is around five to ten white eggs, which hatch in around four weeks (if the hen does not accidentally crush them first).

The Meat of Rouen Ducks

If you plan on raising ducks for meat for your small farm or homestead, you won’t find a better option than the Rouen duck.

Although these birds are somewhat slow to mature, taking up to eight months to be ready for the table, they have abundant, delicate-tasting flesh that is perfect for roasting.

Some farmers choose to process their Rouen ducks for meat when they are about four to five and a half pounds, usually as early as four or five months old.

This is not a bad idea if you want to save money on feed – plus, the meat will be much leaner and lighter tasting. However, you won’t be allowing the bird to grow to its largest potential size.

Make sure you get Rouen Ducks that are listed as Production Rouens if you want them for meat.

These can be processed earlier and will weigh a bit more than Standard Rouens, which take longer to grow out to a suitable size. 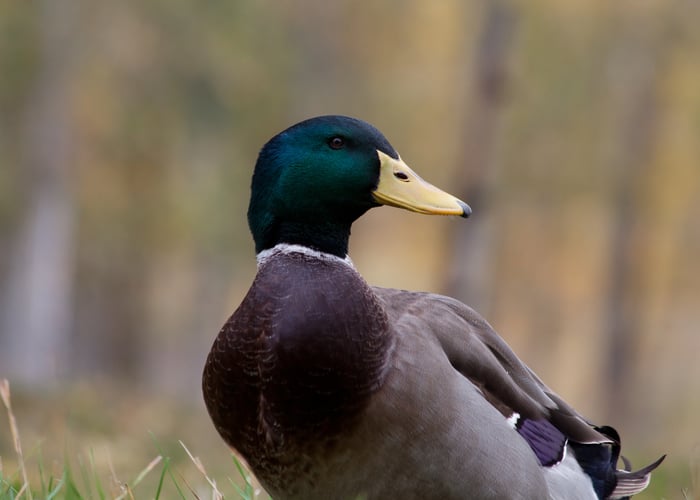 Benefits of Raising a Rouen Duck

Rouen ducks might not be the first ducks you think of as you’re looking for the right breed for your small farm. However, there are plenty of advantages to raising these birds.

First, their beauty! These ducks offer all of the beauty of Mallards but with significantly better-tasting meat.

The drakes mature at eight to ten pounds while the females at around seven or eight. They are common non-commercial ducks, and the market for these birds is rapidly growing.

Rouen ducks produce far leaner meat than Pekin ducks, the standard commercial meat duck in the United States. Rouen duck meat is more distinctive. It has a lighter flavor than other duck meat.

Here are some advantages with raising Rouens: They are attractive, and they are docile. This makes them easy to handle if you wish to raise ducks for pets or exhibitions.

Plus, Rouens are slow-moving and unlikely to fly away. You won’t have to erect tall fences or worry about them wandering off. They tend to stick close to home. 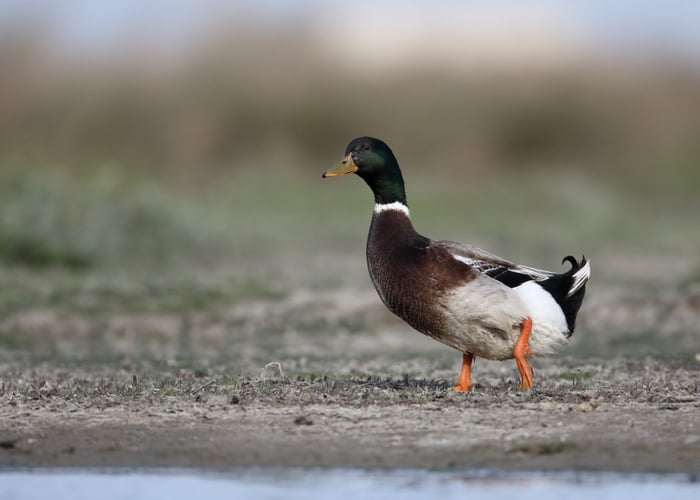 Challenges of Raising a Rouen Duck

The biggest disadvantage of raising Rouen ducks should be somewhat obvious. They are not the best for eggs. Rouen ducks only lay about 125 eggs per year at best.

Females often crush the eggs by mistake.  So what few eggs you do happen to get may not even make it to your dinner table.

When raising Rouen ducks, particularly those that you plan to breed, you must pay close attention to the appearance and health of your birds.

Ducks with strong legs are large in size. They have deep, level, and straight keels, and a horizontal body carriage should be valued above all others. It’s important to watch out for Rouens that have overly developed keels. This can cause serious problems with breeding for drakes.

Also, keep an eye out for over-heavy ducks. They can crush their eggs if allowed to incubate them.

Although that’s not a problem if you don’t intend to raise Rouen ducks for their eggs – or if you are okay with hatching your own eggs under an incubator – it is something to be aware of if you want to avoid a mess!

One final disadvantage of raising Rouen ducks is that they are relatively slow to mature.

This means that they might not be the most economical if you look for a breed for commercial meat production.

Where to Buy Your Rouen Duck

It can be somewhat challenging to find Rouen ducks for sale, as they are listed as a “watch” status by the Livestock Conservancy. There are fewer than 5,000 breeding birds in the United States.

However, you can find ducklings for sale at places like Purely Poultry, My Pet Chicken, and Murray McMurray Hatchery.

Before you bring your Rouen ducks home, make sure you have a shelter that will protect these birds from the elements in the winter.

They aren’t the most cold-hardy, although they aren’t necessarily more vulnerable than any other species. You do not need to heat their housing. Just keep it free from a draft.

You will also need a place where your ducks can dunk their heads and bills in water. A pond for splashing is perfect for these fun-loving birds.

You’ll want to have commercial duck food pellets on hand for these hungry little ducks, too. Since they grow to such large sizes, they have the appetites to match!

So are Rouen ducks right for you and your backyard flock? Only you can decide that.

However, if you’re looking for an attractive species with gorgeous plumage and a friendly, easy-going demeanor, you may want to add the Rouen duck breed to your shortlist of potential breeds to consider!

Read Next: So Your Thinking of Starting a Duck Farm Business 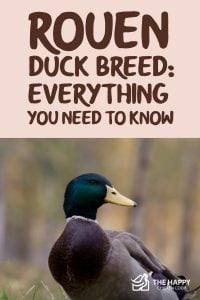 One thought on “Rouen Duck Breed: Everything You Need To Know”