10 Mistakes Made In Winter With Chickens 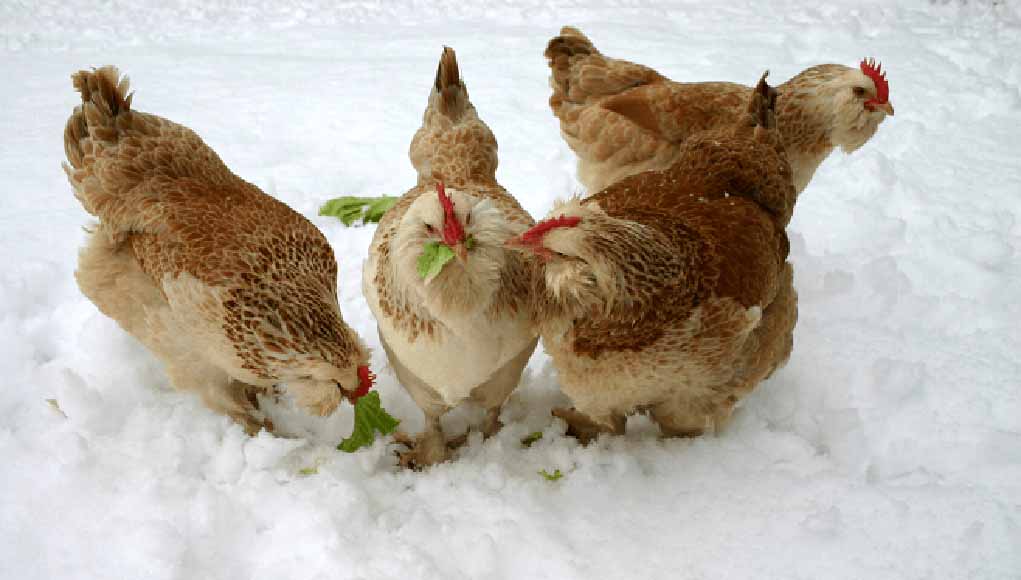 Chicken owners need to know how to care for their flock when the weather outside gets colder.

Some places might not get snow, but others get several feet of snow, and either way, preparing for winter is a wise thing for everyone.

I will share ten different mistakes chicken owners make, why they are wrong, and what you can do about it.

One of the worse mistakes that chicken owners make is not having a plan in place for frozen water.

For chickens getting enough water is essential. They need it to digest their food, but they also need it to grow, produce eggs, and regulate their body temperature.

When it gets below freezing outside, the chicken’s water can be frozen in as little as an hour.

You need to plan ahead of time because if your hens can’t get water for even a few hours, you could see fewer eggs for weeks.

They also won’t eat and can’t keep themselves warm. There are several options to keep water from freezing.

Keep it heated with a heated chicken waterer, add apple cider vinegar to it, or you can place a water bottle in it with salty water inside it.

Those last options will make it take the water longer to freeze.

A heat lamp is NOT safe to use inside the chicken coop, and here are some reasons. A chicken can fly into it since they are not very accurate fliers.

They could be kicking up dust, or even a feather could fly into the heat lamp, causing a fire, mainly if you use the deep litter method for your coop’s floor.

The lamp could even fall and cause a fire. Every year heat lamp fires burn down many chicken coops with the chickens inside and can even cause the house to burn down if it is near the coop.

Also, the electricity could go out for whatever reason. While you might not think this to be a big deal, it takes the chicken’s system a while to adjust to the change in temperatures, and there isn’t enough time with the sudden drop.

As a result, their bodies can go into shock, and hypothermia can set in.

There are many chicken coop heaters available that are viable and safe options.

Closing The Chicken Coop And Not Allowing Ventilation

Inside a chicken coop, it can get quite damp for several reasons. This increases the ability for mold to form and cause respiratory diseases in a flock of chickens.

Too much moisture can also build up in the coop and cause frostbite.

To avoid this, you must give them some ventilation to exchange the damp air with a good attitude. The idea is that everything is blocked off except the ventilation above the roost that is at roof level.

The vents must be high above the chicken’s head while on the roosts.

During the winter, you want to make sure that the coop is not drafty since this can cause combs, waddles, and toes to get frostbitten quickly if the wind chill factor is below zero.

Drafts are gusts of wind that you are not controlling, which can come in from a crack around the window, door, holes in the walls, or around the floor.

You should seal everything up from roost down to the floor. The draft of cold wind comes in, hitting the chickens and causing them to be chilled instead and unable to stay warm.

You can seal around the windows by caulking and putting heavy plastic over the walls to help prevent these drafts.

Not Letting Chickens Out in the Wintertime

You may think that chickens would not be interested in being outside in the cold, but they need their outside time.

It can help keep them from being bored, and it gives them sunshine and fresh air, which they need as much as we do.

They will surprise you and go out even in the snow. Some might not but that is their preference. It also gives them exercise and helps them to thrive and be happy.

When it gets below freezing outside, there is something other than chicken waters that freeze in the coop: your chicken eggs.

You can’t use frozen eggs in every recipe, and you can’t get the shell to seal back around them after they thaw either.

So to keep them from freezing, you should go outside every few hours, so they don’t have time to freeze before you get to them.

Not Stocking Up on Extra Feed for Chickens in Winter

Chickens need 1.5 times more feed in the wintertime than the summer or spring, so you can run out if you are not stocked up enough.

They can’t get the extra food from foraging bugs in the winter, and they also need more carbohydrates to stay warmer.

When they digest the food, it creates heat internally that radiates through their skin, causing the air next to the skin to be warm.

Raising the Wrong Breed of Chickens In Winter for Your Area

If you live in the South or the North, you want to make sure you get chickens that work well for your climate.

In the cold North, you wouldn’t want a chicken with large combs and wattles because they would be more easily damaged with frostbite.

You would also want chickens with more meat to them instead of some small or skinny ones that couldn’t handle the cold.

If you live where it is hot and humid most of the year, having heat-tolerant chickens would be necessary.

Having small, sleek bodies and large combs will help them stay cool in the extreme heat. So choosing the right breed for your area is very important for you and your chickens.

If you use the deep litter, it is vital to do it right. If you don’t, you could make the coop an unhealthy place for the chickens and yourself.

It would help if you used carbon-based litter like pine shavings, leaves, or grass clippings. Make sure to choose the right chicken bedding. While it needs proper aeration, you can’t expect the chickens to turn it well, so you will have to turn it regularly.

It would help if you also had cross-ventilation and open eaves because excess moisture and ammonia gasses must escape.

The moisture is balanced and not too dry or wet since too wet can make the hens sick. You will have to start it in the spring because it must be built up in layers.

Start with four to six inches of pine shavings, adding as everything starts decomposing.

Don’t use diatomaceous earth because it will kill the beneficial insects and microorganisms and dry out the litter.

Putting Chicks in The Coop Too Soon

Have you ever noticed that they seem to only be available in the spring when you go to buy chicks? This is because winter is too harsh a climate for little ones.

Even if they are eight weeks old, have all their feathers, and don’t need a heat lamp anymore, the winter is still too cold for them.

So, it is usually best to wait for spring to get them unless you supply them with heat until they are nearly full-grown, which, as I already mentioned, is a bad idea.

I hope these tips will help you have a successful winter. It’s coming here soon, and it’s always good to be prepared.

We have other guides on wintering your chickens, be sure to check them out below. 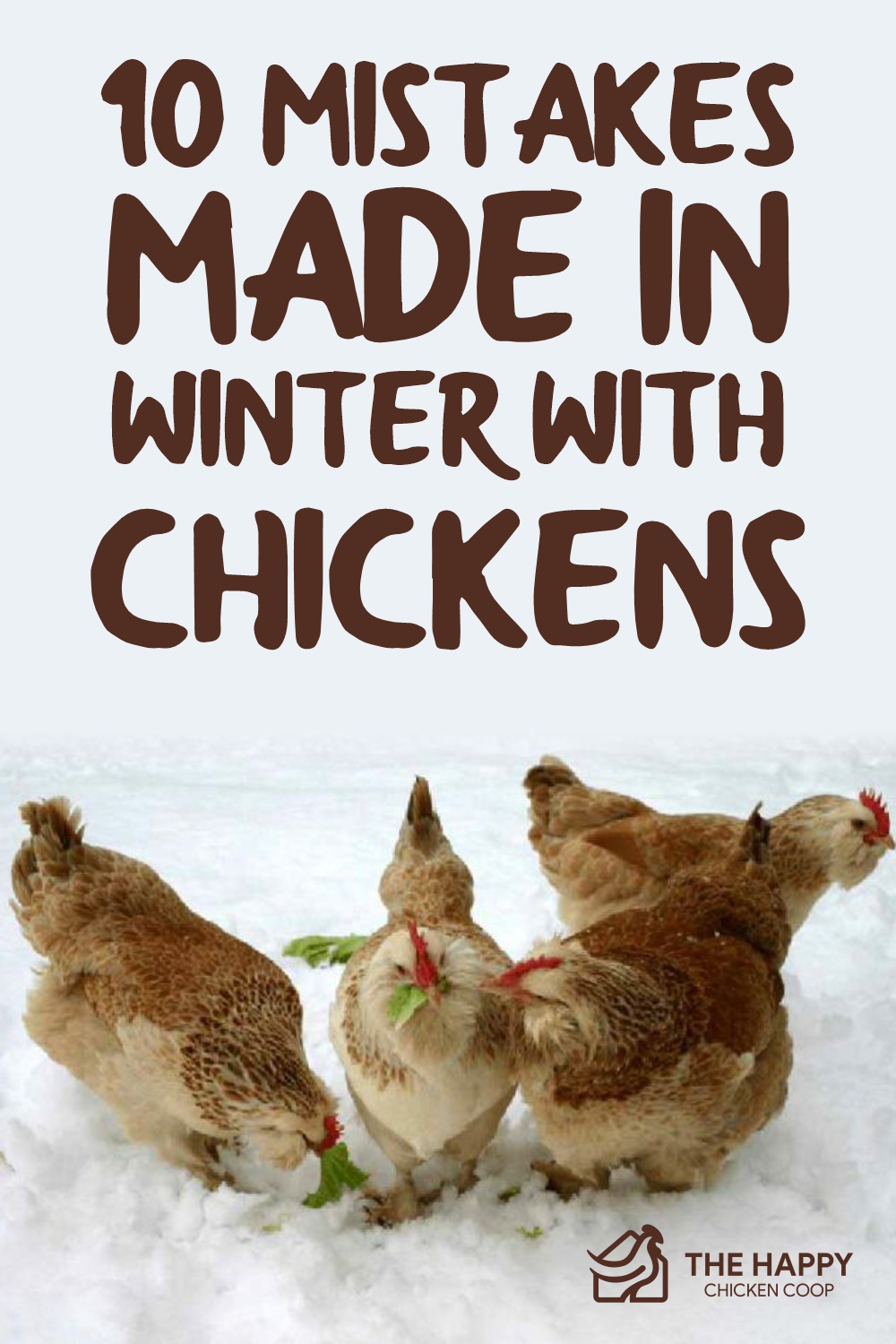 5 thoughts on “10 Mistakes Made In Winter With Chickens”