Chicken Names: Best List of Names for Your Flock 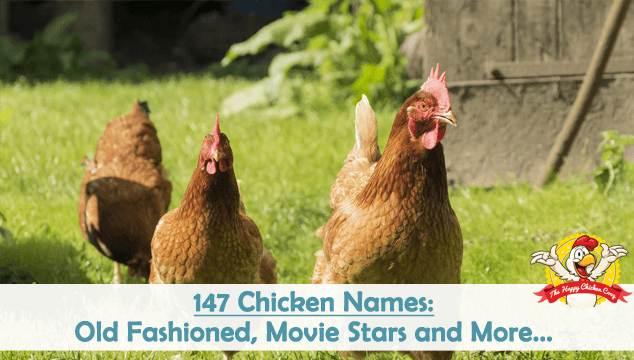 Someone once asked me if my chickens had names. I replied “of course, don’t your children have names?”

OK – so I’m not quite to the point of thinking my chickens are ‘real children’ – my hens are much better behaved!

This article is a bit of fun to see what names people have come up with for their birds – you might be surprised at the variety and hilarity of some.

You can name your hens when you first get them, or you can wait until they develop personalities.

We will also look at some famous chickens, both real and fictional in the hopes of inspiring you to name your hens!

Of course, we expect you to let us know in the comments section below what you decide to name your hens…

Chicken Names That Are Famous In The Real World

A very real and adventurous hen named Monique, sailed the world with her ‘boyfriend’ Guirec Soudee.

She became his best companion and provided him with six eggs per week!

President Theodore Roosevelt had chickens at the White House. His favorite was a hen called

Baron Spreckle and a nameless one legged rooster.

Martha Stewart to name a few.

People have cooked up some imaginative names for their hens and roosters. Several chickens have been named after film stars, celebrities or historical figures. A small selection follows:

There are many, many more, but you get the idea!

Chickens Names from the Silver Screen

There are surprisingly few superstar chickens…several chickens featured in several films but few actually have names!

Of course, who can forget the cast of Chicken Run: Ginger, Rocky, Fowler, Babs and Bunty.

At the time of release to the cinema it was running box office second to Me, Myself and Irene – not too shabby for a ‘stop motion’ chicken tale!

The Muppet Movie features Camilla the chicken who is Gonzo the Great’s girlfriend, although apparently, Gonzo can’t tell one chicken from another and frequently dates another ‘chick’, thinking it’s Camilla.

To me, Lady Cluck would suit a Wyandotte.

In 1991 an animated film called ‘Rock-a-doodle’ introduces us to Chanticler, a rooster in search of fame.

Chanticler goes off to Las Vegas and becomes rich and famous as a singing Elvis impersonator!

Perhaps the most well-known cartoon chicken is Foghorn Leghorn the barnyard rooster of Looney Tunes.

Foghorn ruled the barnyard, tormented the Barnyard Dawg and was pursued by Miss Prissy, the barnyard spinster hen.

She finally gets her rooster in the cartoon episode titled ‘of Rice and Hens’ where they are happily married.

In the extended Garfield franchise (U.S. Acres), there are two chicks mentioned by name –

Booker looks like a chick, but Sheldon looks like an egg with feet! Inside his shell there are apparently all sorts of things including a pinball machine – why would he want to leave his shell?

Also in the same franchise we meet Roy Rooster who is loud, greedy and annoying.

In a 1935 cartoon, Prunella Pullet falls in love with a returning boxing hero in ‘Cock o’ the Walk’.

Clara Cluck was an operatic chicken friend of Mickey Mouse. She appeared in several Mickey

Mouse cartoons but never had her own cartoon.

In the ‘101 Dalmatians – the series’, we meet ‘Spot’ the chicken who wants to be a Dalmatian.

Back in the 1960s’ series ‘George and the Jungle’ there is a superhero chicken by the name of Henry Cabot Henhouse III.

In the world of video games, chickens are few and far between, but ‘Bernadette the Chicken’ made her debut in Donald Ducks ‘Goin’ Quackers’ video game as a wicked chicken.

I think Bernadette would be perfect for a Brahma.

Although several advertisements feature chickens, few give their stars a name.

Quite possibly the most famous and memorable to this day is Cornelius the Kellogg’s rooster.
Although Cornelius has long since gone to the chicken-yard in the sky, his memory and likeness linger on.

Some folks seem to stick to a theme with the names they choose.

The only limit to your themes is imagination, as you can see in our short, compiled lists.

Names for chickens that fit the appearance or personality of your hen are also popular. Of course, you might have to wait a while before you name them so you can determine their personality, but it can be fun!

I think Pom Pom would make a great name for a Polish Chicken!

The not so humble hen has inspired many books to be written about chickens – without a doubt, chickens are popular in children’s books.

Although they are mostly for children, they are still worthy of a read by us adults.

Many of these books are ‘moral’ stories reflecting ‘good’ societal values – much like a latter day ‘Aesop’s Fables’.

Some of the most notable children’s books featuring named chickens are:

In 1907 Frank Oz introduced Billina the talking chicken to his ‘Oz’ series.

She is a notable heroine in ‘Ozma of Oz’ in which she saves Dorothy and her friends.

When the adventure is over, Billina stays in Oz and becomes the Queen and Governor of all chickens.

Name Your Chickens to Stay Organized

Not only is it fun to name your chickens, especially if they all have certain characteristics that set them apart from one another, but it’s also a good way to keep track of your flock over the years.
You can always use leg bands to identify your chickens and write down their corresponding names in a logbook of sorts. This can help if you want to see how old your chickens are down the road, or who has dropped in production. Sure, you could just number your chickens instead of naming them, but what’s the fun in that?
Organizing information about illnesses, breeding, and injuries can also help you keep track of your chickens over the years. And if they all have fun, memorable names, it’s easier to discuss your chickens with farmworkers, spouses, and others that care for your flock.
While some may argue that naming chickens creates an attachment, I’d argue that it just helps you maintain your flock and appreciate each bird individually.

Naming your chickens is a fun thing to do, especially if you have kids.

Children can come up with some amazing chicken names.

As you can see, you can stick to a theme or just ‘freewheel’ with the names you choose.

Some of my birds are named, some aren’t – I think the ones who have the most character are the easiest to name, such as my Ms. Crabby.

She came by her name by being crabby to everyone for the first two or three years of her life.

She is now seven years old and has mellowed considerably, but still answers to Ms. Crabby!

We have given you some suggestions here and a lot of ideas for your birds’ names.

Read How Much Room Do Chickens Need?

63 thoughts on “Chicken Names: Best List of Names for Your Flock”