Caring For Ducks During Winter 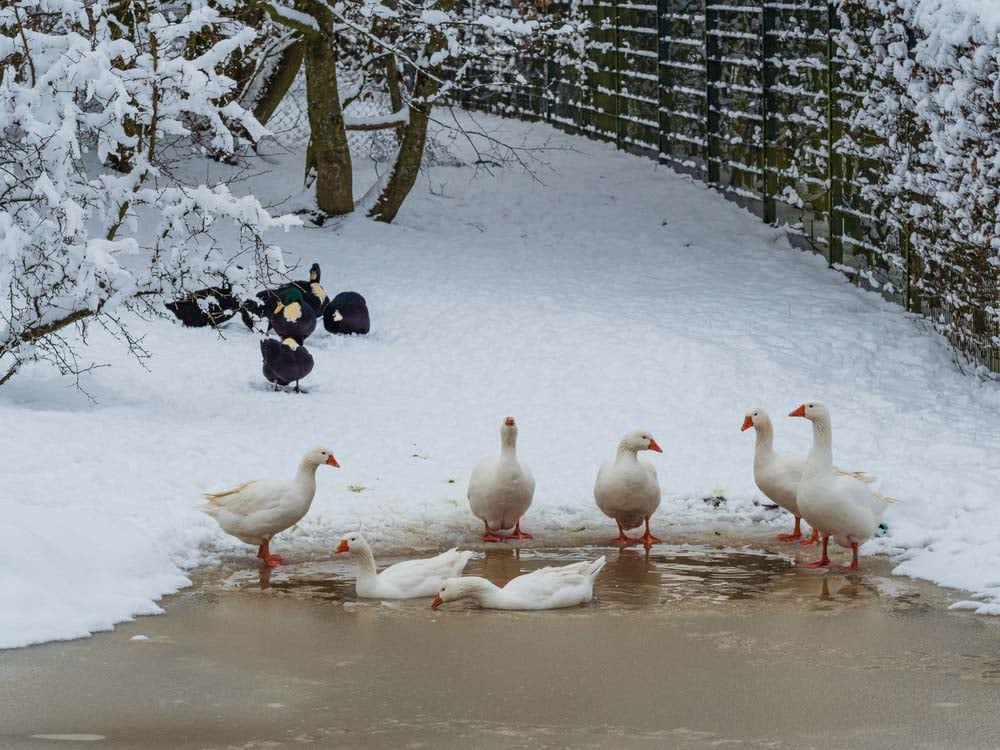 Caring for ducks in the winter involves a small but vital amount of preparation to keep the flock members healthy. Fortunately for avid duck keepers, these birds are typically a lot more cold weather hardy than chickens and far less susceptible to both respiratory problems and frostbite.

The thick layer of body fat combined with the soft down beneath weatherproof duck feathers significantly help the poultry birds warm even during the coldest day of winter. It is not unusual to see ducks lounging about in the snow on a January day just as comfortably as they would be floating on a pond during the summertime.

Although ducks are far less likely to get frostbite and do not seem bothered by the snow, there are a few husbandry winter preps that should be a part of your fall chores to better ensure the ducks remain well cared for and healthy until the sun shines bright in the sky once again. 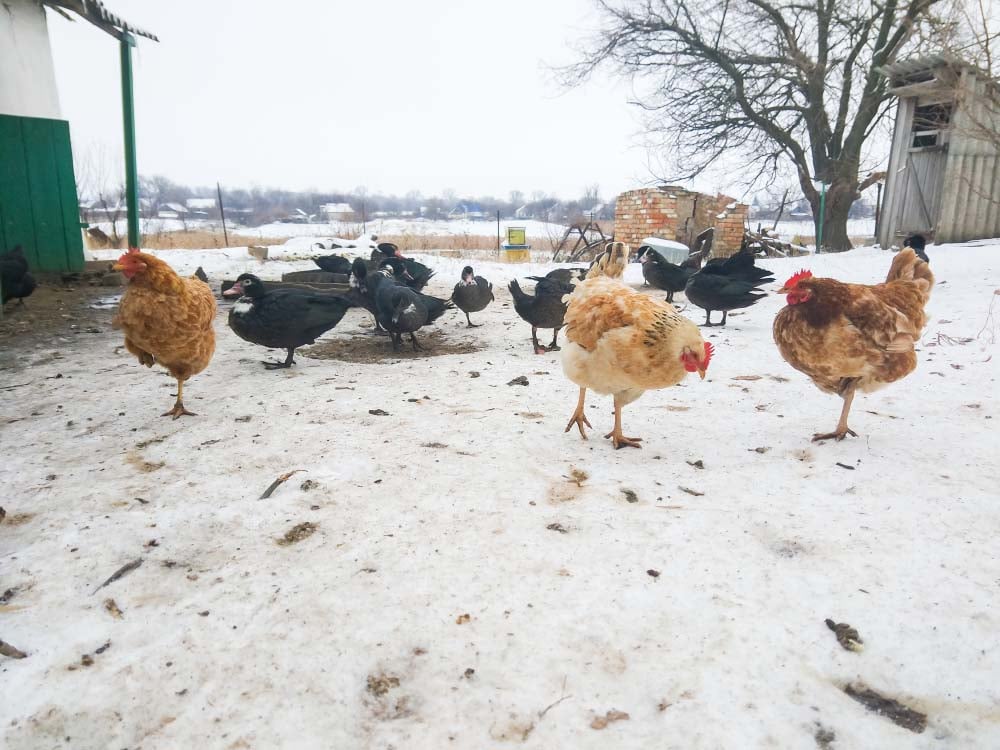 Infusing more high fat, high protein, and high calorie snacks into the ducks’ diet will help keep the bird warm not only during the daytime, but at night when the temperature drops even cooler. Suggested energy snacks for ducks include: peanuts, Swiss chard, oatmeal (especially warmed) kale, cabbage, and cracked corn.

Ducks typically lay better during the winter months because they do not need to use as much energy to stay warm. High energy treats will help the birds use even less of their natural energy to stay, which can in turn foster better egg production – both quality and quantity.

While adding extra bedding to the coop might seem obvious, it is too crucial of a duck care winter prep not to be highlighted. How much straw you will need to add to the coop will depend on how many ducks you are keeping, but do not be stingy with it. Just layer the sleeping areas at least as tall as the ducks themselves and there should be enough natural straw insulation to last for at least a few weeks to a month – depending upon how much time the ducks spend inside of the coop. On average, ducks spend less time actually inside the coop during periods of inclement weather than chickens.

The ducks will trample down the straw bedding, with the hens even making nests out of it. I often layer some sawdust into the straw bedding as well to help keep out as much cold air as possible.

Because ducks spend more time outdoors and you want to encourage that to keep down cleaning chores during the winter, consider sprinkling out a few bales around the run, as well. Fill a few old tires or tubs with straw to give the ducks a nice soft and warm place to lounge during the day and particularly after they go for a swim.

3. Keeping The Waterer From Freezing

Float some ping pong balls inside of the water if it has a closed top. The balls will move about as the avid drinkers slurp from the fountain attachment on the water and keep them moving about to prevent freezing. This inexpensive little tip typically works until the temperature dips below 20 degrees.

In addition to the ping pong balls, floating plastic bottles filled at least half way full of standard table salt will help prevent the water from freezing, as well. In my personal experience, the salt water bottles often prevent duck waterers from freezing until it gets into the low teens. The weight of the bottles will keep them from being flown away by a slight wind, as would happen with the ping pong balls, so they can be used in tub or trough waterers, as well.

Once the temperature gets this cold, you will likely have to either add more salt water bottles into the waterer or dump them and pour in more really hot water – or both. Ducks should never go longer than eight hours without access to water. Ducklings cannot be placed in water until they are a minimum of two weeks old because their natural drying oils do not come in until at least that time. Ducklings should not go longer than four hours without drinking water to prevent the threat of potentially deadly dehydration. 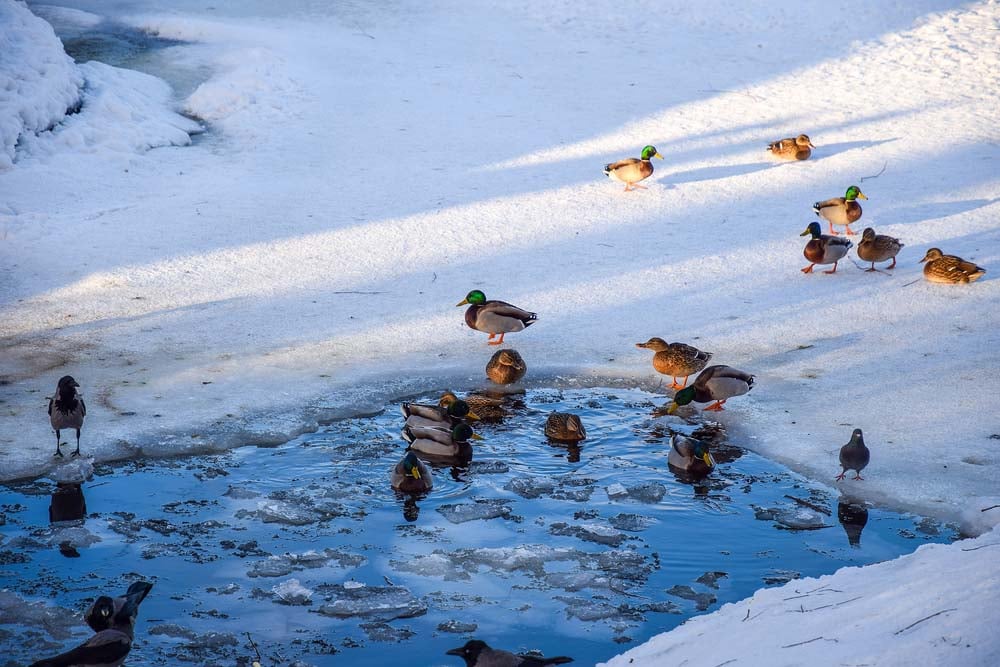 4. Keep The Duck Pond Or Pool From Freezing

Ducks always need access to a water source, be it a spacious pond on a rural homestead or a small decorative garden pond or baby pool in a more suburban environment. Although ducks do usually swim less during the winter months, they still have the innate desire to swim and cleanse themselves. A duck absolutely needs to be able to dunk its head and beak into water at least a few times a week to remain healthy.

Keeping a large pond from completely freezing over is a lot easier than preventing a baby pool or small garden pond from doing the same thing. The more the ducks have access to the water source, the more water movement occurs, which helps prevent the chilly water from freezing into solid ice.

There are several ways to prevent a duck pool or pond from freezing – most can be accomplished entirely off grid so there is no need to run multiple long extension cords out to your pond or coop.

Take the salt water bottles tactic up a notch and use gallon milk jugs for large ponds. The jugs can be left to float around to a rope can be strung through the handles so a line of the jugs can be placed in exact positions on the pond and not all clump together when the wind blows or the ducks go swimming.

Simply anchor the ends of the rope on an inexpensive plastic step in livestock fence post or a similar simple and cheap to install stake. Criss crossing the jugs across the pond will not deter the ducks from swimming after the flock members get used to their presence. I prefer to string the milk jugs a few weeks before I expect the weather to take a cold turn to allow the birds time to learn the jugs are not a threat and will by no means eat them if they go for a swim.

Ducks must have access to water at all times, both for drinking purposes and to swim in. A large duck pond can actually be easier to keep from freezing into a solid layer of ice than a plastic baby pool or prefabricated garden pond being used as a swimming water source for a duck flock. 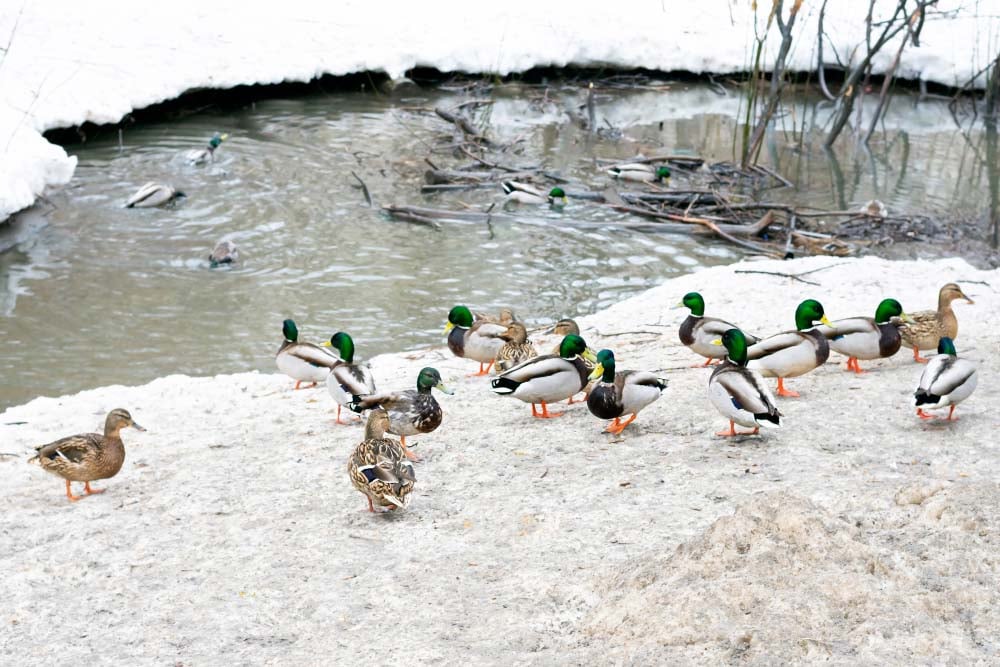 The members of your duck flock will need access to swimming water even in the chilly weeks of January and February. Keeping the water from freezing when the temperature dips below 32 degrees is far less of a chore if you have prepared for the annual snow and ice season at least a little bit in advance.

The easiest and most affordable way to keep either a duck pond or a duck pool from freezing in the winter involves keeping or making a hole in any ice that forms on the water source. Exactly how you go about keeping the duck pond from freezing will depend on how large of a space your flock has to swim,but all the basic principles are the same – and can even be adapted for use in the duck flock waterer.

Not only will some snacks placed in an open tub waterer, small decorative pond, or baby pool float around and help prevent the water from freezing, the high energy snacks are also a great boredom buster during a season when the ducks are less actively foraging.

Until the temperature gets in the low 20 or the teens depending on how much of a wind chill you are experiencing, heads of lettuce, cabbage, chunks of vegetables, etc. will turn into a hilarious duck version of apple bobbing. If you are also keeping chickens, this winter duck care tip might not be a safe option. The chickens will also eagerly go after the snacks and they can not only catch frostbite easily from being subjected to the cold water, but can drown rather quickly if they go into the pond after a tasty treat.

If your coop or pond is not located too far away from the house you can purchase a small livestock safe de-icer or pond fountain in the water feature used by the ducks to keep the water moving or warmed enough not to freeze completely. If you would like a more in depth method of the set up, you can watch a video posted by YouTuber, 50 Ducks in A Hot Tub, we have linked here. A heated large dog bowl is often deep enough to allow a duck to dip its head and bill inside to “wash off” if you are momentarily fighting a losing battle against a cold snap, as well.

Ducks can poke their bills through slush or even a thin layer of ice to get a drink, but will not be able to swim in such semi-frozen water. Caring for ducks during winter involves just a small amount of diligent planning and very little expense. Keeping the flock healthy and still producing eggs during even the most nasty and frigid times of the year can be accomplished without a lot of extra coop and run chore time, as long as you plan ahead and have the needed materials in place before the first snow falls. 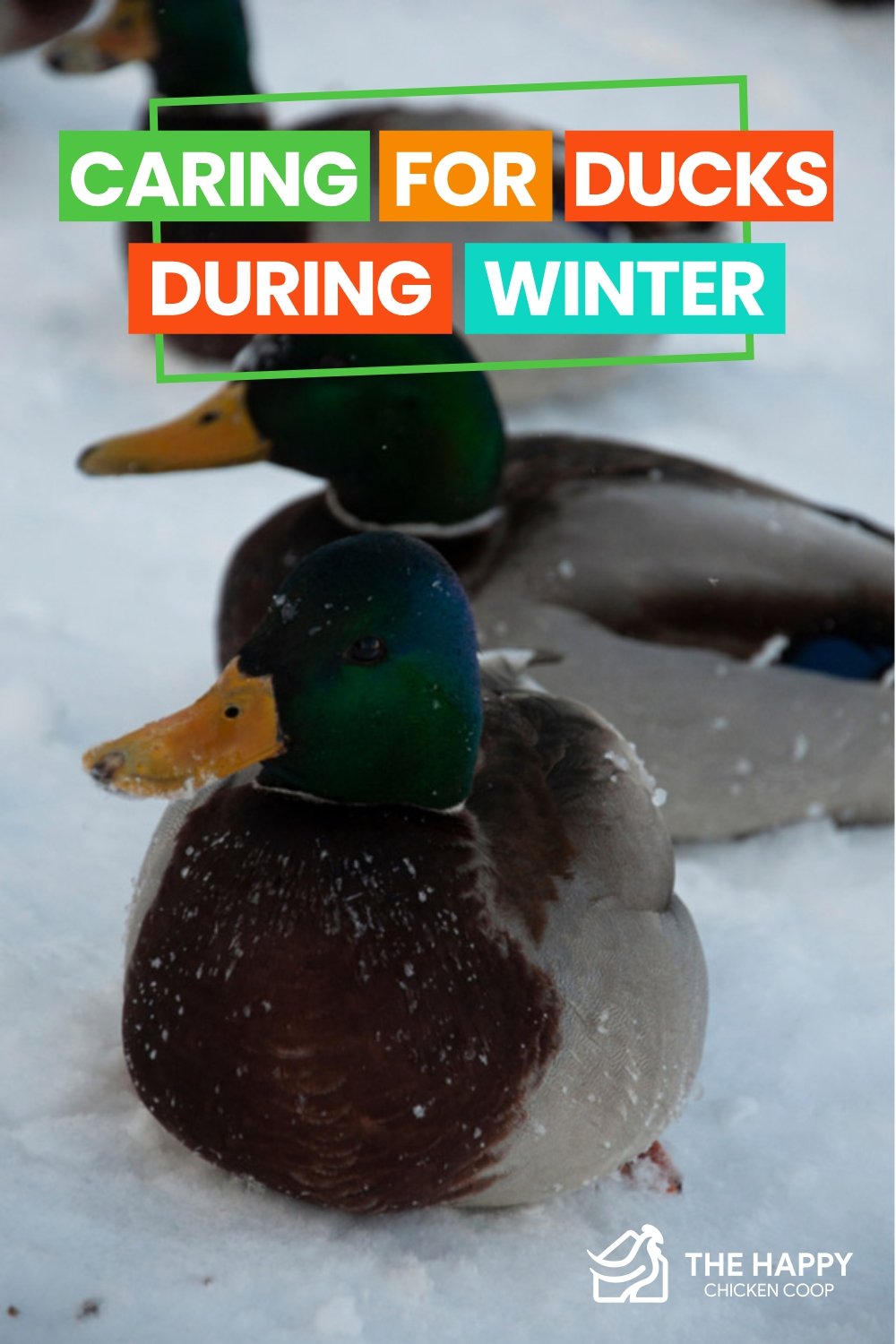