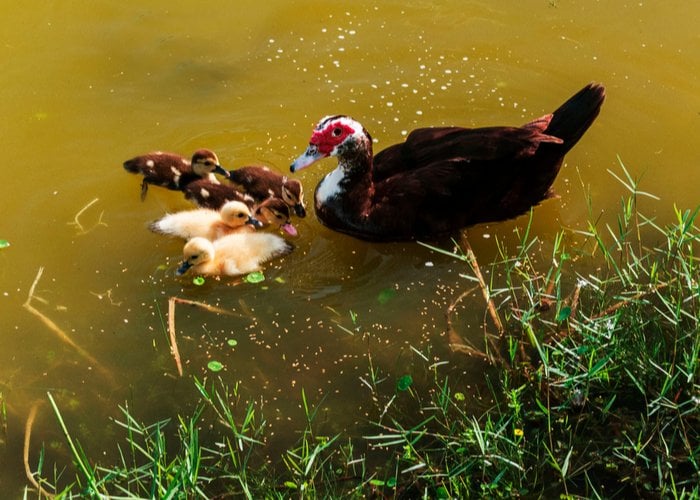 Raising ducks or raising chickens is becoming a far more frequently asked question. Backyard chicken keeping has been popular for many years as more folks became engaged in homesteading in small urban and suburban settings, as well as the more traditional larger scale rural setting. Duck keeping is garnering increased attention because the common myth that you need a pond to keep ducks for eggs has been busted … that and the huge creamy duck eggs being simply delicious.
While both ducks and chickens can be raised for meat, homesteaders in suburban and urban settings far more often keep the poultry birds for solely egg collection purposes. Although both types of poultry birds can be raised in similar habitats, eat the same feed, and cost roughly the same to keep from a husbandry perspective, but ducks are often prohibited from being kept inside incorporated areas.
Before putting too much thought into which is better for your backyard or homestead, ducks or chickens, check local laws to determine if raising ducks is even allowed. Simply because you live in a “Right to Farm” state does not necessarily mean you can keep any type of poultry bird that you want – or as many as you desire. 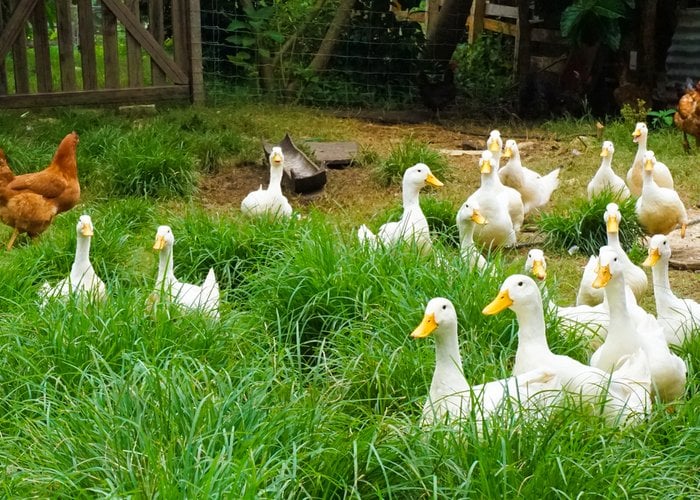 Duck Keeping Myth Busted – You Need A Pond To Keep Ducks
Ducks MUST have a water source to swim in, but it does not necessarily need to be a pond. If you are blessed to live on a large rural homestead like I do, putting in a pond if one does not already exist is not a large challenge. But, creating the same scenario in a suburban or urban area is definitely a no go.
Digging a shallow decorative garden style pond in the backyard or putting a plastic baby pool in the duck run will be sufficient for the needs of these water loving poultry birds 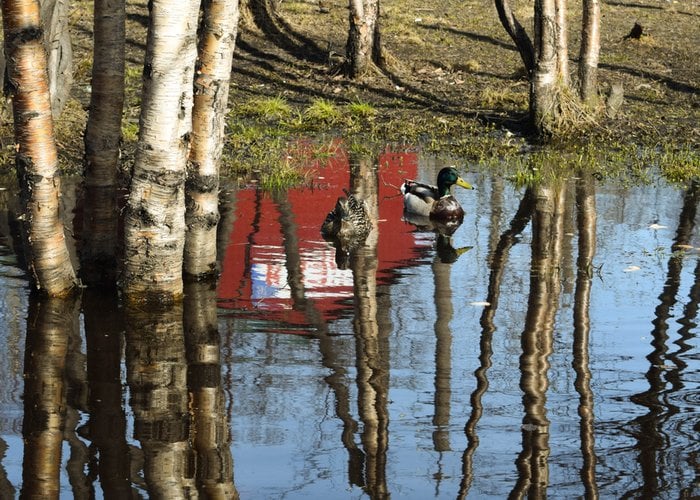 Which Are Better, Duck Eggs Or Chicken Eggs?
There are many facets to consider when attempting to decide which eggs are best – part of the equation boils down to something as simple as family taste preference.
Chicken And Duck Egg Nutritional Facts

Although it is not commonplace, some people who are allergic to eggs laid by chicken hens are not allergic to duck hens. Before trying a duck egg if you are allergic to chicken eggs, a physician should always be consulted – especially if the allergic reaction is severe.
Egg Laying Cycles
Chickens have a 26 hour laying cycle. This means each individual hens could (and often does) lay at different times throughout the day. The task of collecting eggs is more time consuming with chickens, if the overall goal is not to miss a single egg or to allow any to become broken as the flock starts to wander about their coop.
Duck hens not only lay for more years than chickens on average, but also tend to lay their eggs between 4 and 8 a.m. on a daily basis. In general, duck hens lay eggs for seven to nine years and chicken hens start to slow their laying habits by the time they are two or three years old. Depending upon the breed, a chicken hen could stop laying eggs entirely by the time she reaches the ripe old age of five.
Duck Hen Habits

Just like chickens, there are many duck breeds. Here are our top duck egg laying breeds.

Ducks vs. Chickens For Pest Control And Foraging
When allowed to free range or “work” in a chicken tractor environment during the day, both ducks and chickens will eat pests – ducks will simply eat more of them … and larger ones.
The foraging instinct comes naturally to ducks and chickens. Each will search out greens and protein to fulfill their dietary needs. Not only will the poultry birds help rid your yard of a myriad of insects, they will reduce the cost of providing commercially manufactured to the flock.
During the hot summer months and even during the snowy days of winter, ducks will continue to avidly forage for pests far more than chickens, on average. There is always the option of raising ducks and chickens together to take advantage of both types. 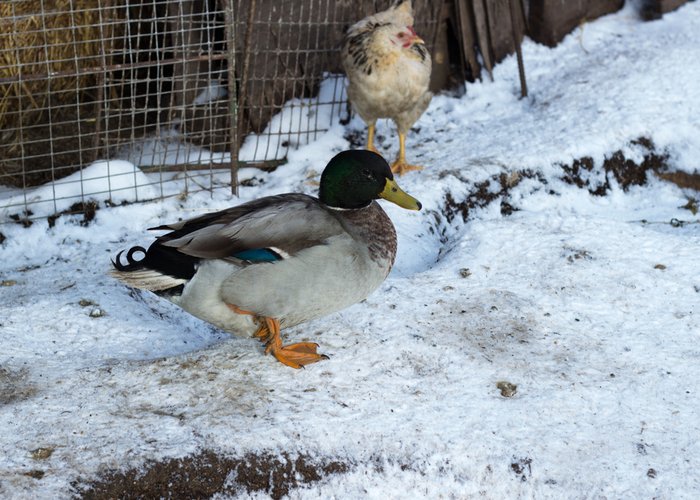 Which Is Easier To Train, A Chicken Or A Duck?
One would think all of the birds would rush to the coop at dusk, but this is not always so. In my personal experience it is ducks, hands down. I have consistently been able to teach ducks (ducklings included) the turn out and put up routine both quickly and easily. My best hope is that the chickens follow suit with the rest of the duck flock and follow them to the coop.
Chickens tend to be more skittish poultry birds and often scatter instead of following me to the coop at night or lining up for turnout in the morning. It has not been uncommon for chicken flock newbies to fly on top of the coop and have no idea (or be too afraid) to come back down and go on into the coop with the rest of the birds – even if I am holding their favorite healthy snack in my hand.
Do not get me wrong, we free range our chickens too and without fail they all wind up back inside of the coop at night – it is just sometimes an extremely tedious endeavor.
Are Ducks Noisier Than Chickens?
While both types of poultry birds can be noisy, ducks are almost always more quiet. There is no crowing at dawn by drakes likes occurs not only then but throughout the day, by roosters.
Chicken hens often communicate with each whether in the coop, run, or during free range time. Duck hens prefer to float in their water and lounge than clatter back and forth to their flock mates.
If your goal is to garner as many eggs as possible from environmentally hardy birds that will feed themselves eagerly no matter the season, ducks could be your best bet. If you want to raise poultry birds in a small space without messing with the upkeep of a water feather, and having a traditional egg and meat bird option, chickens could be the right fit on your homestead.
There are pros and cons to raising both ducks and chickens. Which is perhaps why an increasing number of folks are choosing to raise both – often in the same coop and run. 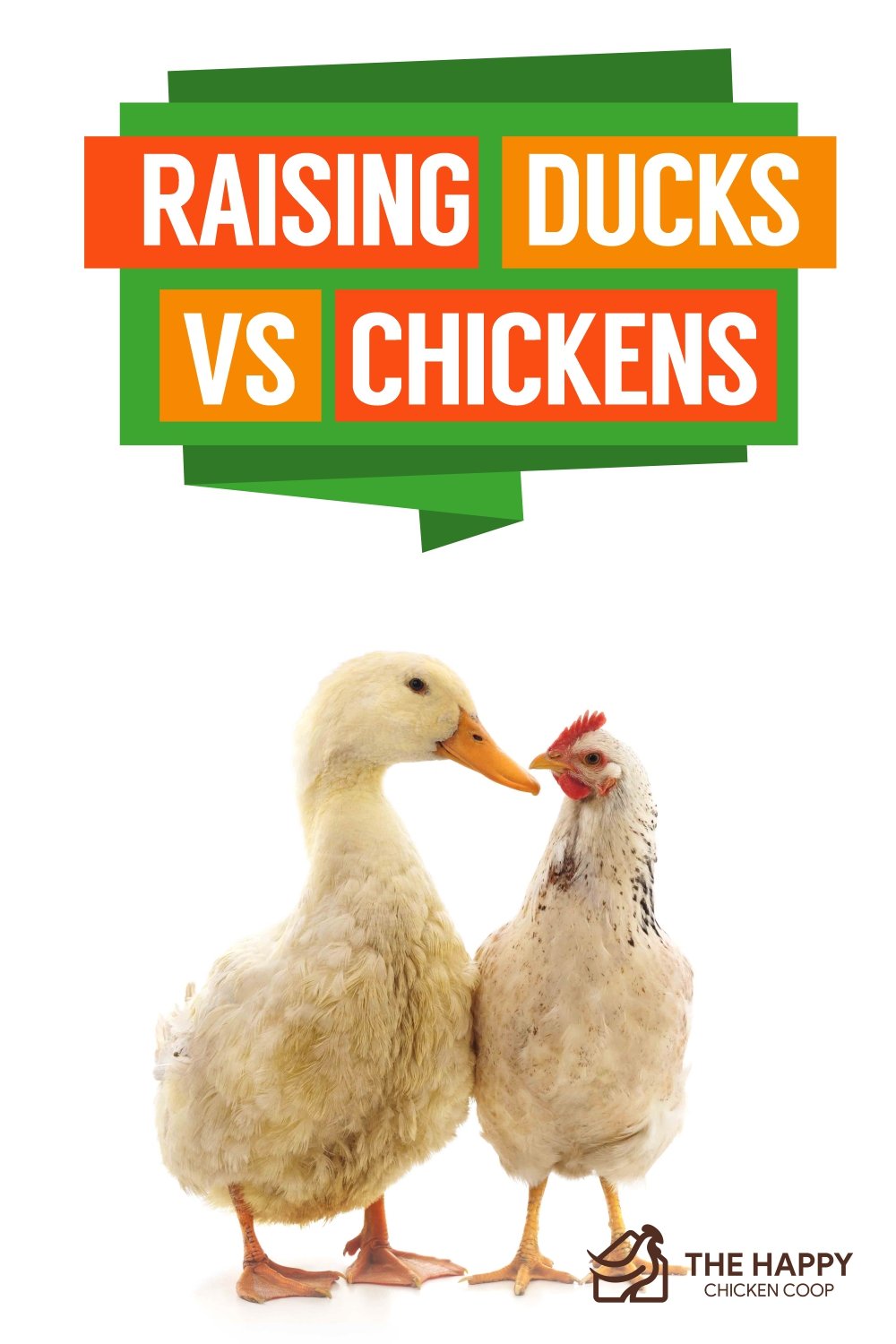