Golden Comet Chicken: What to Know Before Buying One 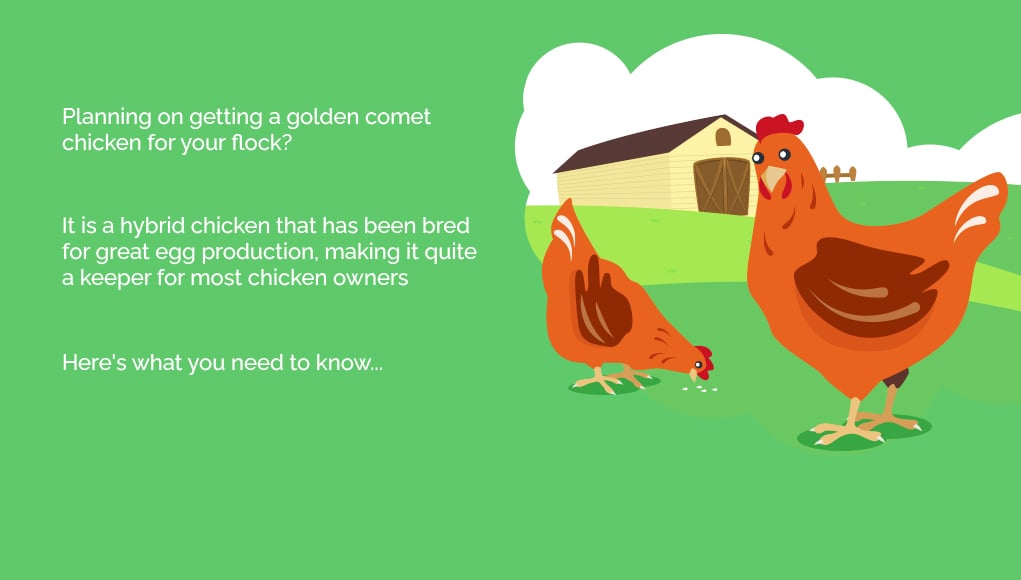 The Golden Comet chicken is one of the more recent hybrid chickens that has been bred for great egg production.

It was initially ‘made’ for the commercial industry, but it has successfully transitioned into small farms and backyards worldwide and is possibly the most widely kept hybrid hen.

This article will delve into its history and personality and learn more about this cheerful and productive little hen.

After reading this article, you will know if it’s the right hen for your flock. 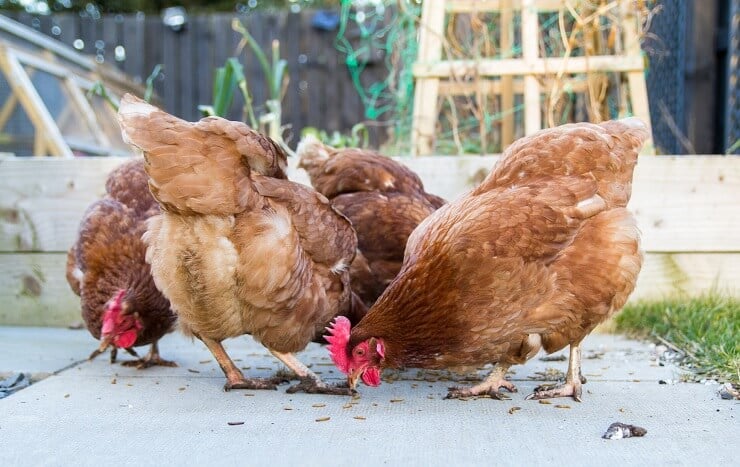 The Golden Comet is a sex-linked chicken. A sex link is not a ‘breed’ in the true sense of the word. It is a cross-breed or ‘hybrid’ chicken. This is an important distinction, as you will see.

If you mate a pure breed chicken with its’ own kind, the chicks will look the same as their parents.

A sex link chicken is a sex-able bird at hatching; that means it’s easy to tell the males from the females.

This is a useful trait for us hatcheries, as it means that the hens can be retained for laying, and the males are unfortunately disposed of.

If you live in an area where you are not allowed roosters, sex link chickens are the best bet for having all girls with no ‘oops’ in the pack.

The golden comet chicken results from a mating between a New Hampshire rooster and a White Rock hen.

Sometimes all or some of these names are used interchangeably, confuses people, and individual hatcheries may have a different name for their ‘line’ of sex link birds. 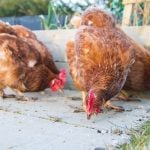 The Golden Comet is generally a light/medium reddish-brown, possibly flecked with some white feathers. It’s actually quite a small bird for a standard chicken, with females weighing around 4lb and males weighing in at 6lb.

They have a single upright comb – comb and wattles being red in color.

The beak is a yellow/brown color, and the eyes are yellow. Legs are also yellow, and the bird has four toes on each foot.

The golden comet chicken hen body is an inverted triangular shape with a ‘U’ shape between the head and tail which is held quite high, almost perpendicular.

As a hybrid, there is no standard set for this bird. 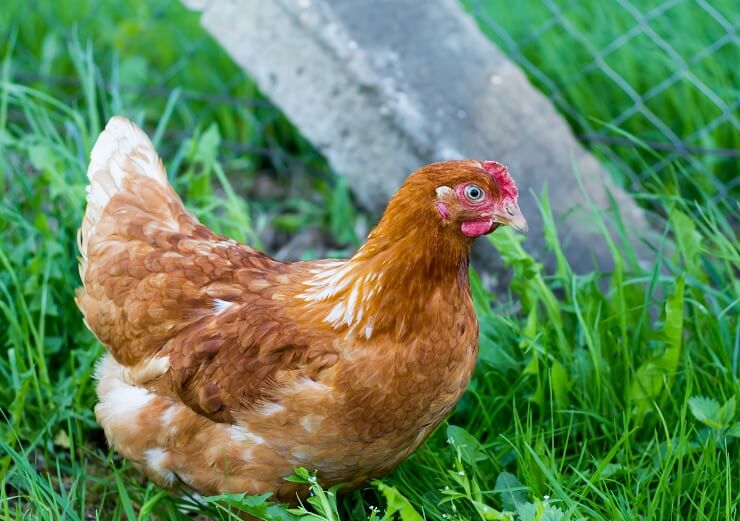 They can lay from 5-6 eggs per week which puts them on a par with the Rhode Island Red hen.

They can put out a whopping 330 eggs annually – that’s almost an egg every day!

True to their reputation for production, these girls can start laying at 16 weeks and continue to be very productive up to around the two-year mark.

After that, egg production will drop off noticeably.

They will seldom go broody – it has been bred out of them, so if you want to hatch some chicks, you will have to fire up the incubator.

This is where the ‘hybrid’ part becomes important.

Remember, the original pairing was a New Hampshire rooster over a White Rock hen.

If you want to ‘create’ a Golden Comet, this is the pairing you need.

In effect, you need a flock of White Rocks and a couple of New Hampshire roosters to maintain your flock.

The Golden Comet chicken is described as a personable and curious hen, is very mellow, and doesn’t mind being picked up by folks.

In fact, some folks say the Golden Comet chicken breed actually seeks out people over its’ own flock mates.

They are resilient, tolerating a wide variety of temperatures. As with most single comb chickens, keep an eye open for frostbitten combs if it is freezing where you live.

They easily become family pets as they are so friendly and gentle. In a flock situation, they are peaceful members.

They dislike any squabbling or pecking generally and will move away from the troublemaker if they can.

They are better to keep with breeds that are calm and non-aggressive as this will avoid them being picked on. Suitable breeds to mix with would be Cochins, Plymouth Rocks, Faverolles, or Orpingtons. 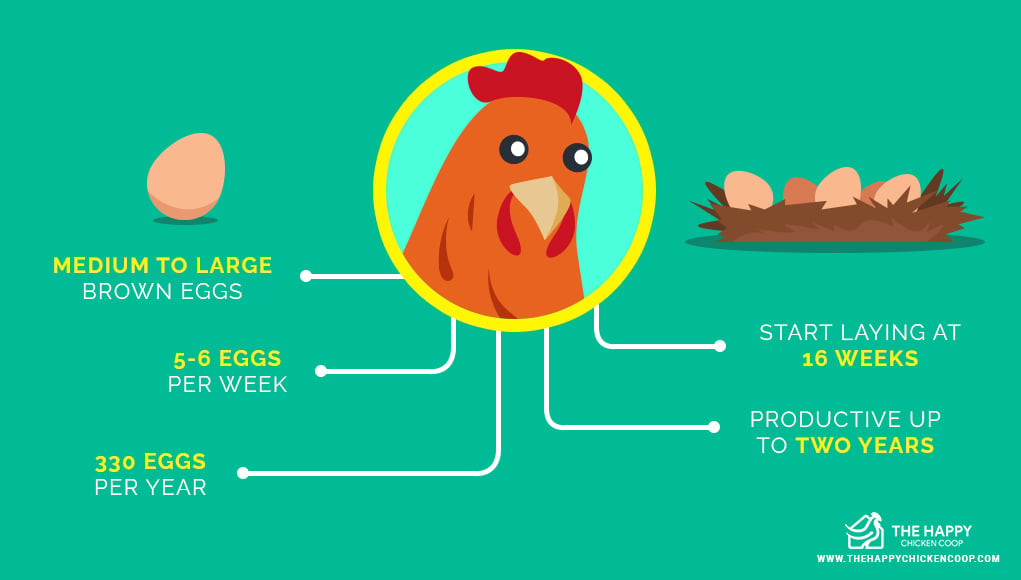 A Golden Comet chicken should not have any real problems in her first 3 years other than the usual possibilities of worms, lice, mites, etc.

As they were bred to maintain a high production rate, their lifespan is usually shorter (generally less than four to five years).

As with all high production hens, they most often succumb to reproductive tumors, egg yolk peritonitis, or other reproductive issues. 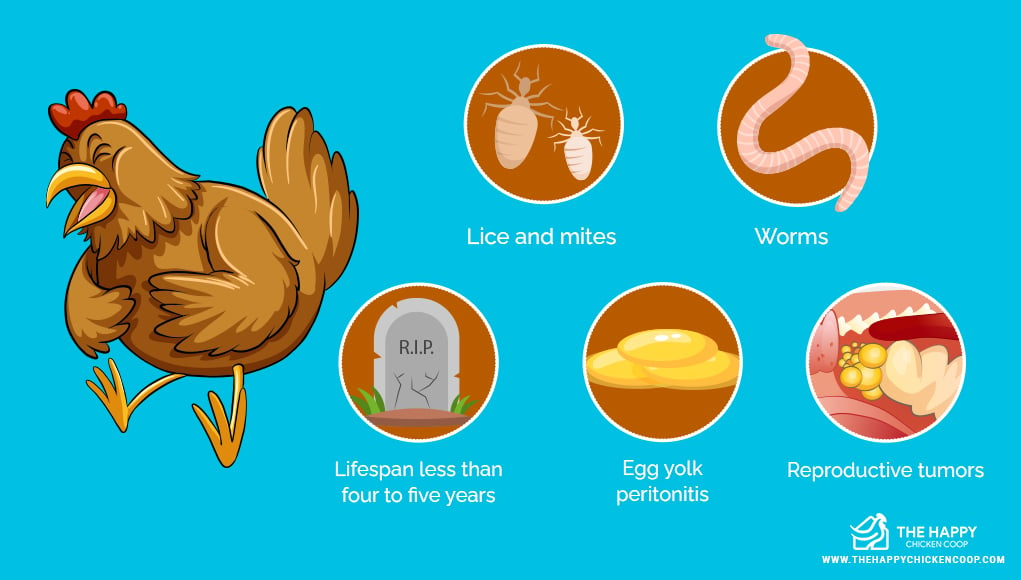 Is the Golden Comet Chicken Right For You?

If you want hens that will produce an abundance of eggs for your family, look no further than the Golden Comet.

She has a prolific output and lays very early. The downside to that is after 3 years, you will need to replace the flock with new girls if you want to maintain egg production.

The Golden Comet chicken is great for kids; they are gentle, enjoy people, and aren’t easily ‘rattled’ in most situations. They seem to take everything in their stride.

Golden Comets are also great for a 4H project or a chicken beginner as they are a pretty low-maintenance bird that can be almost self-sufficient.

They tolerate confinement well, but if allowed to free-range, they are good little foragers.

FAQs on the Golden Comet

Technically Golden Comets can be dual-purpose.

Although the hens are small, they wouldn’t feed a family on their own. However, the males can be used for meat.

Can you hatch golden comet eggs?

Yes you can! But like we said before they are not the best setter, so it’s best to opt for the incubator from the get go.
If you want help on how to incubate eggs read our guide here.

Golden comets will start laying eggs at around 17 weeks or 4 months.

Be ready though as they are about to lay tons of eggs!

Hybrid hens such as the Golden Comet are great birds for a small backyard as they take up relatively little space, they aren’t particularly noisy, and they are egg-laying dynamos!

As you may imagine, two or three years of fairly constant egg-laying take a toll on their bodies which is why they don’t usually live to ‘old age.

In a commercial setting, breeders would replace these hens after two years maximum.

Golden Comet chicken hens are the ones that people receive when they rescue hens.

They do go on to ‘pop out’ those eggs for another year or so usually, but not as prolifically as before.

Folks that have rescued them say they are delightful birds to have around your yard.

Do you have any in your flock? Please share your story with us in the comments section below…

READ NEXT: Buff Orpington All You Need To Know: Temperament and Egg Laying 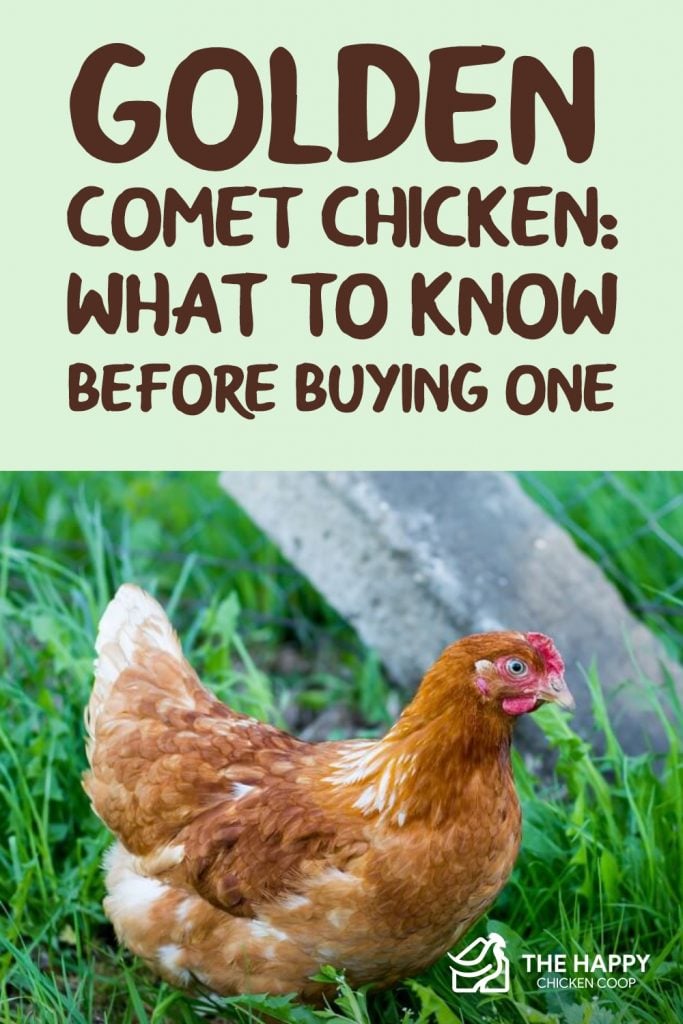 36 thoughts on “Golden Comet Chicken: What to Know Before Buying One”