Chicken Anatomy 101: Everything You Need To Know 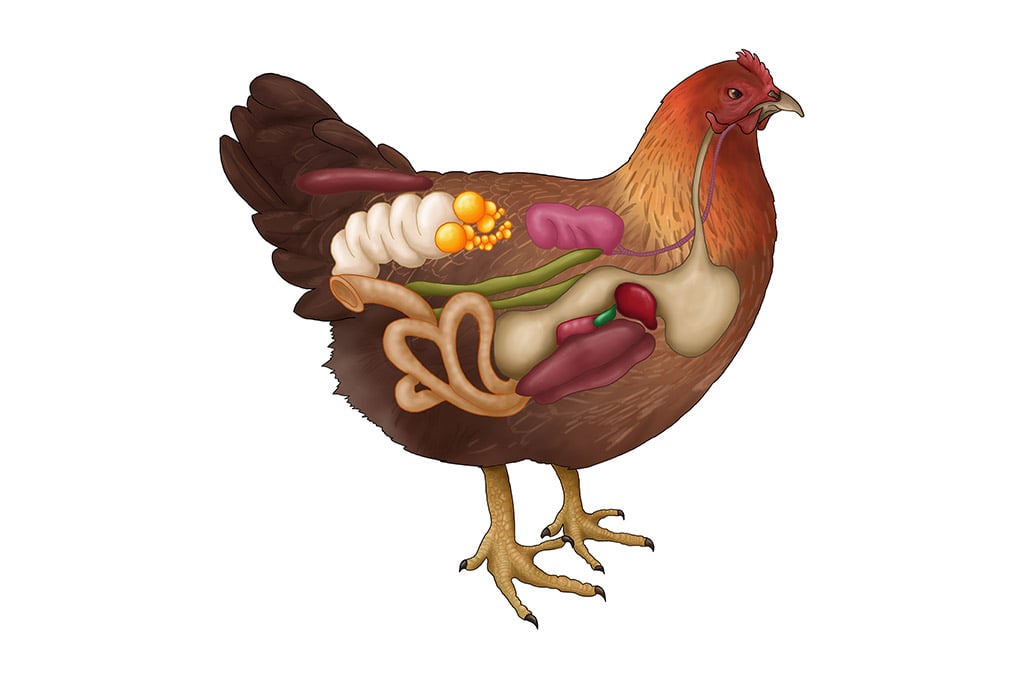 Chicken anatomy is a huge subject to cover in one article, so we have really pared it down to the basics for ease of understanding.

The references provided will give you greater in-depth knowledge if you want to delve further into chicken anatomy.

The areas we will cover here today are:

That should keep us busy for a while!

Understanding the basic anatomy of the chicken will help you to see just how different (and similar) the chicken is to us, humans.

While many of the basic structures are comparable to things we see in humans, such as the skeleton, there are some notable differences too, such as the ability to fly.

I find this fascinating reading – I hope you do too.

Chicken Anatomy of Feathers and Skin

Birds are unique in many ways – one of them being feathered. The feathers serve several different functions, all of them vital to the birds’ health and well-being.

Without feathers, birds cannot fly. Of course, many of our chicken friends do a poor job of flying anyway but the feathers do provide them with enough lift to fly a short distance out of harms’ way.

Feathers also provide warmth in the cooler months, cool the birds in warmer months, and provide protection from the elements; camouflage and courtship colors are also the province of the feathers.

Once they are one year old, chickens molt their feathers once a year – in some species of bird a complete molt may take much, much longer.

The average chicken will complete a molt in 8-12 weeks. Some birds of prey will start molting in the spring and finish in fall!

The new feather starts growing in the follicle, gradually pushing the old feather out until it drops, or is ‘molted’.

You will see that your hen now looks a bit like a hedgehog or porcupine with short quills instead of feathers.

These quills are very sensitive to touch because they contain nerve and blood supply at this time, so try to avoid touching the bird if possible. For a more complete look at feathers see our article here.

Skin covers almost the entire body of the bird and has several vital functions. It acts as a protective barrier for the bird and acts as an insulating layer in conjunction with the feathers.

There are several different types of skin on a chicken. Each type has been modified to perform certain functions.

There is something called a uropygial gland at the base of the tail, it is more commonly called the preen gland.

The bird uses the oily extract from this gland to keep the feathers oiled and in good condition.

The leg scales help to protect the underlying tissue while the claws (toenails) scratch at the ground to turn up tasty morsels like seeds and bugs.

This scratching helps to keep the nails short. You may notice in older birds that don’t scratch much, the nails get quite long and will need to be trimmed occasionally.

The beak is hard and when used as a weapon, can be formidable. If you have ever had a well-aimed peck from a broody hen you will know just how damaging the beak can be!

The beak is kept in good shape by probing and wiping the food residue on stones etc.

The digestive system of the bird has some distinct differences from our human system although the end product is the same!

Chickens have a beak – no teeth. The beak can peck at and break up larger particles of food so they are small enough to swallow.

Have you ever wondered why chickens run when they find a mouse or snake?

It is thought that if the object is too large to swallow, the bird runs with the food, others will follow, grab at the food and tear it apart into bite-sized pieces – sorry if you were eating when you read this.

Once the morsel has been swallowed, it travels into the crop – an expandable storage area, then the proventriculus where it awaits its turn in the gizzard.

Why do birds have a crop? Chickens are prey creatures, they evolved to be able to ingest a lot of food at once and be able to store it just in case they needed to fly away from danger.

The stomach is the area where the digestion of the food starts. Enzymes are added to soften the food prior to the entrance into the gizzard.

The gizzard is a very muscular portion of the digestive tract where the bird stores grit and small stones for grinding its’ food into a paste.

Once ground, the food paste now moves along the intestines where various proteins and enzymes dissolve the food removing all the nutrients.

These enzymes are supplied by the gut itself, pancreas, and liver in much the same way as human digestion.

Once past the gizzard, the food travels down the small and large intestine and the ceca. The two ceca are actually blind tubes whose function is re-absorption of water and fermentation of the coarser matter.

This is where the really smelly chicken poop comes from.

In a young bird, the passage of food through the system usually takes around 4 hours, in a laying hen it is 8 hours and in a broody 12 hours – now you know why broody poop smells so vile!

Onward to the cloaca or vent, the exit ramp of the intestinal thruway.

In the cloaca, the urinary excrement is added to the waste giving bird poop the characteristic white covering of urate. 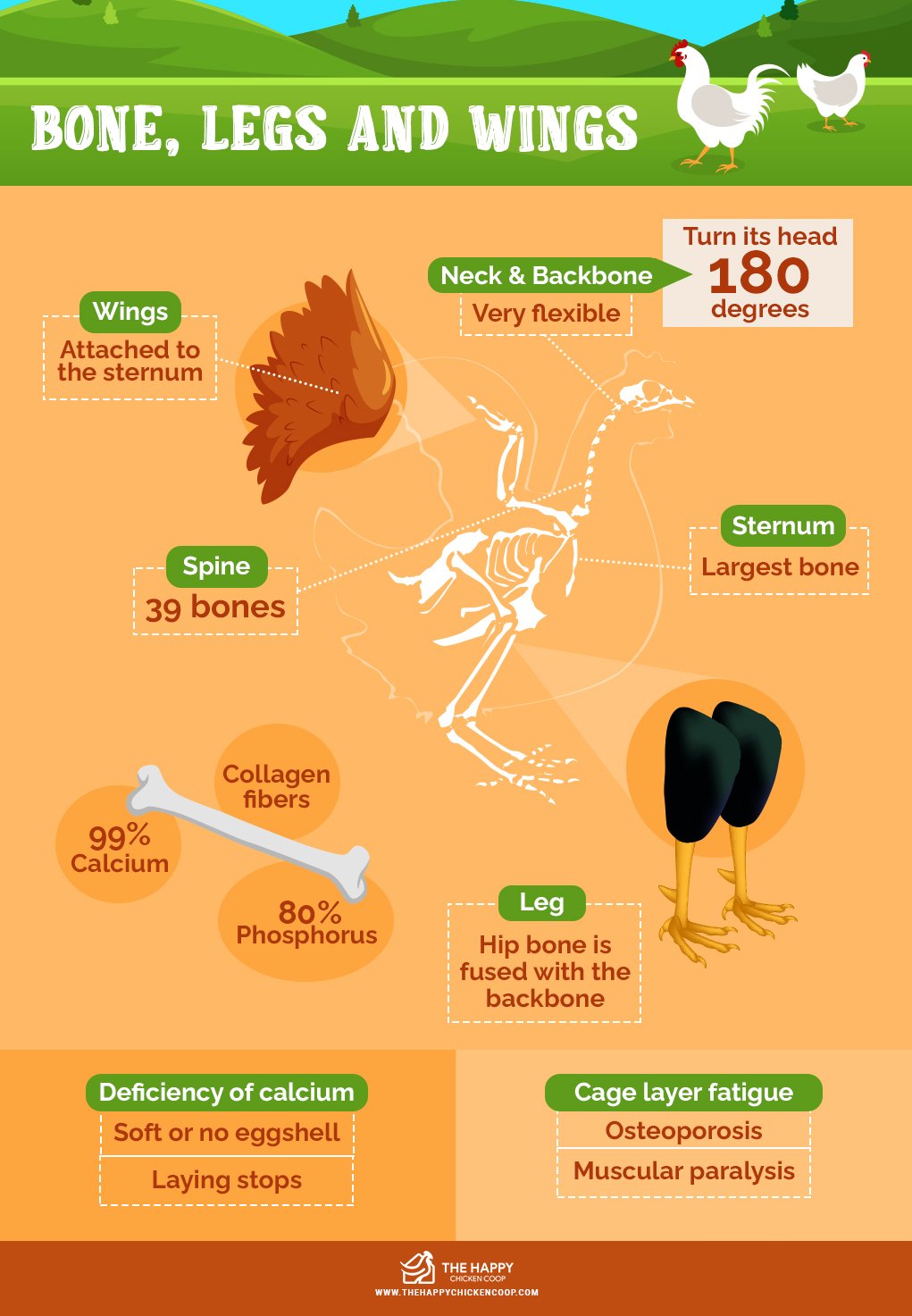 Bird bones are composed mainly of calcium and phosphorus and a fine web of collagen fibers that are bound tightly together.

The skeleton provides support and protection, much as the human skeleton does.

99% of calcium and 80% of phosphorus are stored in the bones. Vitamin D which we mentioned earlier is vital for the conversion of these minerals to a useable state for the bird.

The deficiency of calcium in the diet will lead to soft or no eggshells, in severe cases laying will stop.

In caged layers, this can be manifested as ‘cage layer fatigue’ leading to osteoporosis and muscular paralysis.

This can be reversed if the bird is placed on the ground and given dietary calcium. This is usually only seen in high-production industrial birds.

The bones of birds can be broadly split into two different types:

The neck and backbone of the chicken are very flexible. The spine contains 39 bones with the neck being quite long.

This acts as a shock absorber to the skull and also allows the bird great range when searching for food – a bird can turn its head 180 degrees!

The sternum is the largest bone in a birds’ body, it covers fully half of the body cavity – the sternum forms a keel which you can feel when you pick up the bird.

The wings are attached to the sternum by very strong muscles.

Once upon a time, the domestic chicken could fly much better than it currently does. The ancestors of the modern chickens were much better at short bursts of flight in order to escape danger.

Mankind has selectively bred chickens for hundreds of years now and through this process the chickens’ flight ability has diminished tremendously.

Although the skeletal structure has remained the same, the muscles are no longer capable of lifting the bird off the ground as they once were.

The leg of the chicken is similar to the human anatomy except that the hip bone is fused with the backbone. This provides a strong and rigid union in conjunction with powerful muscles. 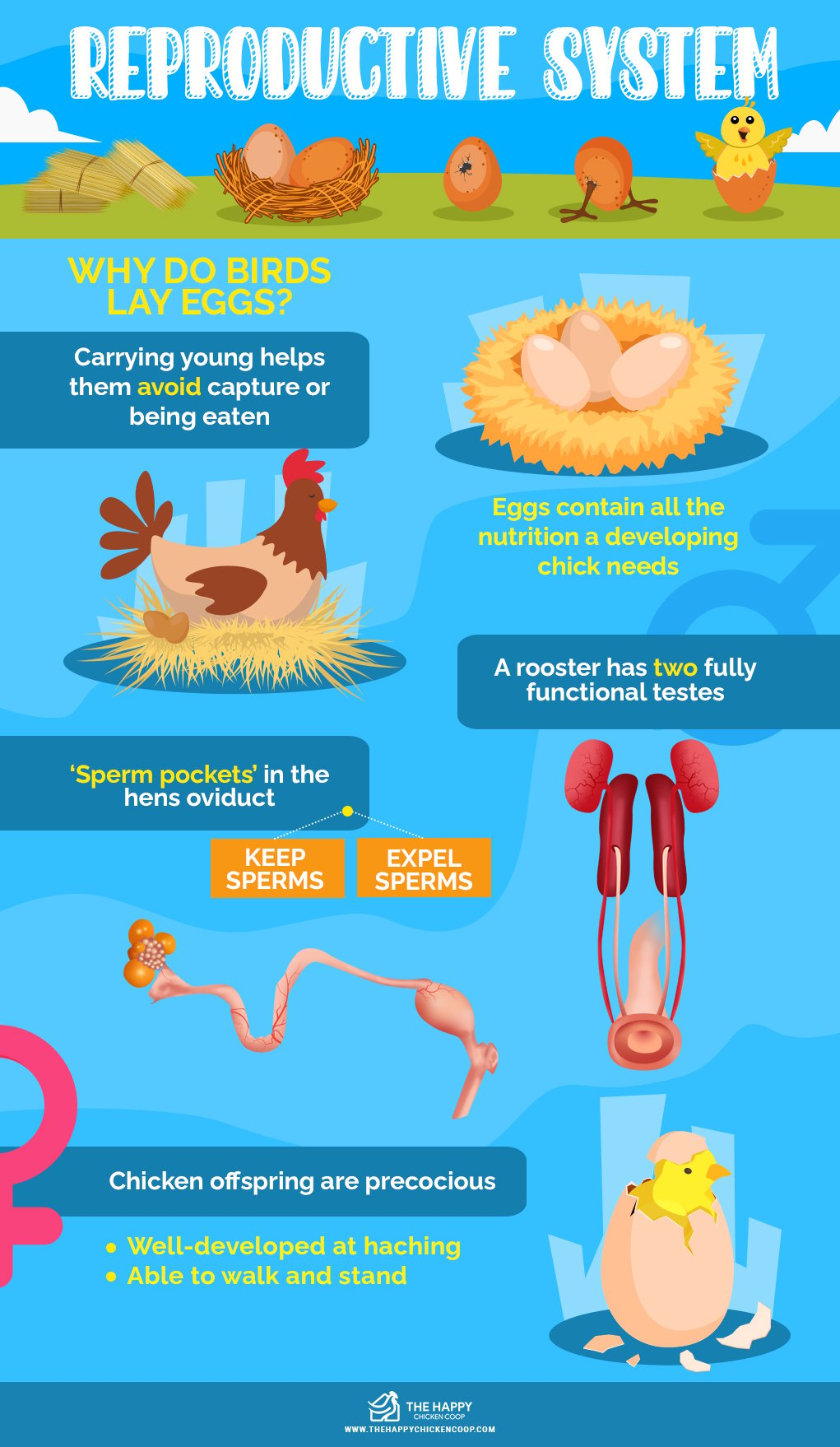 We have covered much of the hens’ reproductive system before, but we are going to do a brief review here to refresh memories.

Why do birds lay eggs? Birds are prey – low on the totem pole of life. Having to carry young in pregnancy would severely affect their ability to avoid capture or being eaten.

So, they lay eggs instead.

The egg contains all the nutrition a developing chick needs and if necessary the mother can leave the nest and fly to safety. Eggs are usually laid in a clutch of several eggs – this helps to ensure the continuation of the species, the theory being that some will hatch and survive.

Chicken offspring are precocious – meaning they are well developed at hatching, able to walk and stand. This also means the mother has to spend less time tending to them.

We already know that a chicken will lay an egg roughly every day, but nothing will come of the egg unless it is fertilized by the rooster.

You may remember from our previous articles, that a hen is born with a pre-determined number of eggs and only has one functional ovary. By contrast, the rooster has two fully functional testes that produce sperm on a continuous basis during his lifetime.

After mating the sperm of the rooster can either be kept in little ‘sperm pockets’ in the hen’s oviduct or if she decides she didn’t like the rooster – she can expel the sperm!

If she decides to keep the sperm, it will stay viable for around 30 days inside the ‘pockets’.

This sperm will then fertilize an egg or eggs. The hen will then lay the fertilized egg and if she decides to become a broody, she will gather several eggs into a nest and sit on them until they hatch.

That was a lightning tour of chicken anatomy 101. As we mentioned earlier, a close and in-depth article would run to several articles’ length and probably bore you to death!

We hope we have distilled enough information for you to find useful and if you remain curious, check out the links provided.

We will be doing more installments of chicken anatomy, so keep your eyes open. 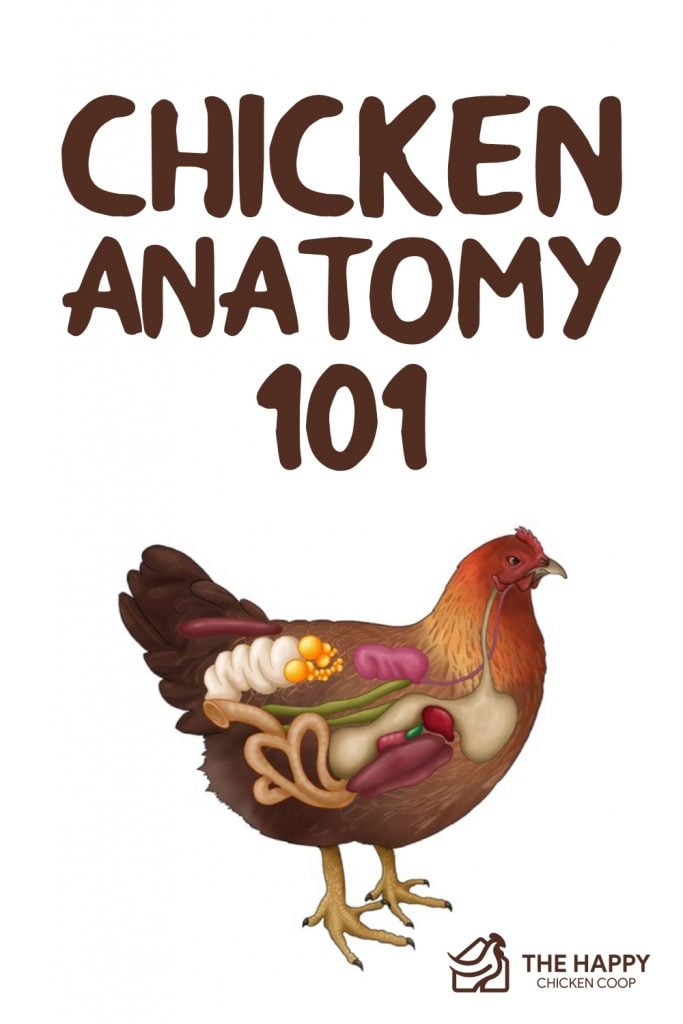 11 thoughts on “Chicken Anatomy 101: Everything You Need To Know”