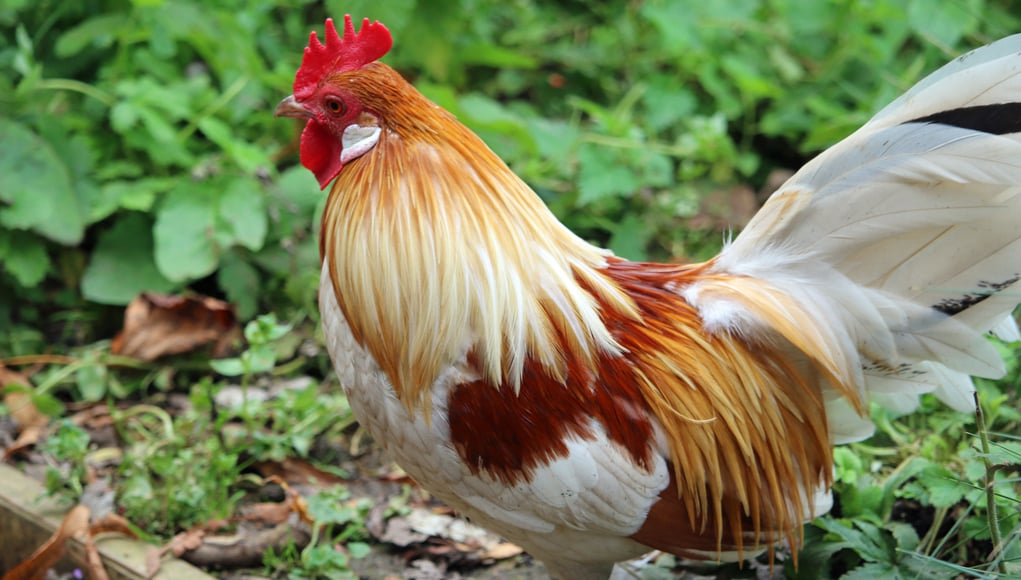 Dutch Bantam chickens are considered to be a “true bantam.” They didn’t have any standard size, and this breed doesn’t have any large counterparts.

This chicken breed is also notably small when compared to other bantam chickens. Apart from their size, their good temperament makes them easy to keep.

They are one of the oldest breeds. The Dutch Bantam chicken breed was first discovered during the 17th century and has now become a prevalent ornamental bird.

Learn more about this chicken breed in this article, along with the Dutch Bantam chicken behavior, egg-laying capacity, temperament, and many more.

The Dutch Bantam chicken originated in the Netherlands. However, historical data says that Dutch sailors imported them from Holland.

It is said that the Dutch Bantam chicken breed was further developed in Holland after they imported it from the East Indies. I

t was said the Dutch sailors got the birds from Bantam Island, one of the Riau Islands Province of Indonesia, during the 1600s.

They used these birds for their egg and meat supply during their voyage. They were also the first few people who domesticated this breed from a jungle fowl in Indonesia.

During this era, people in the lower class favored the Dutch Bantam breed. At this time, landlords demanded large fowl eggs from the tenants.

Because of the small eggs, tenants wouldn’t need to give their landlords any of it. Also, they would have plenty for themselves.

The first record about Dutch Bantam chickens as a specific breed was in a zoo data in 1882. The Dutch Poultry Club later recognized the breed by 1906.

This bird was first seen in the United States during the early 1950s, but its recognition soon died down. It was re-imported to the country in the 1970s and regained its popularity.

With the rising popularity of this breed, the Dutch Bantam entered the American Poultry Association’s Standard of Perfection in 1992.

Additionally, this bird was imported to the United Kingdom during the early 1970s. Their Dutch Bantam Club was formed in 1982.

The Dutch Bantam chicken was also trendy in Switzerland. It arrived in the country in 1968, and its club was formed in 1982.

There are different names for the Dutch Bantams, depending on the country. For instance, they are named Hollandse Kriel in Holland, Holländische Zwerghühner in Germany, and Naine Hollandaise in France.

This breed is prevalent in their home country, the Netherlands. It’s also favored in the UK and Germany and increasingly gaining fame in South Africa and the United States. 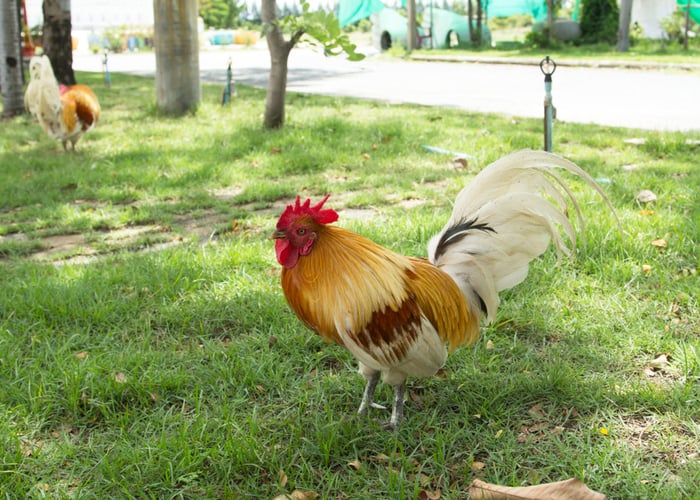 Haven’t you seen a Dutch Bantam chicken yet? Here is an overview of what this bird looks like:

They are one of the most miniature chicken breeds there are! Despite that, the Dutch bantam chicken boasts its high entire breast and upright stance.

The Dutch Bantam rooster has a more stately position than the females. On the other hand, the Dutch Bantam hen carries herself with a statuesque display.

They have short backs, and their wings are found closer to their bodies. Branches are more prominent and more prolonged for the Dutch Bantam rooster.

This breed happens to be good fliers, given their giant wings and petite body. Their tail is also well spread and complete, along with shapely sickles.

They have a single comb with five good points that are bright red. Their white earlobes are small and oval-shaped.

Their skin is white, and their plumage has a partridge pattern. The Dutch Bantam’s beak is slightly curved, intense, and short.

The wattles of these Dutch Bantams are medium-sized, broad, and red. Their legs are unfeathered with a slate blue color and other color varieties, and each consists of four toes.

The size of usual bantams is one-quarter of the standard breed. Their height can range from 8 to 14 inches.

The American Poultry Association approved the Dutch Bantam recognized variety, and it turns out that there are six color varieties. Dozens more types haven’t been officially recognized.

Here are the accepted varieties of Dutch Bantam colors:

This chicken breed is the ideal choice if you are still a beginner. They have a docile temperament so that they won’t be much trouble to their owners.

The Dutch Bantam chicken behavior is generally friendly, calm, and docile. They are easily handled and tamed.

They are also affectionate to their owners, especially to children. Because of this, Dutch Bantams would also make excellent pets, and you’d be confident to have them play with your kids!

One of the Dutch Bantam chicken behaviors you wouldn’t expect is flighty. Since they have large wings for a small body, they don’t have trouble flying at specific heights.

Still, they are trainable and easily tamed, so you don’t have to worry about losing any of these flighty birds. They can also tolerate confinement if you plan to keep them in a coop.

Another thing you should know about the Dutch Bantam chicken breed because they are not cold-hardy. They do not tolerate intense heat as well.

If you think this chicken breed is right for you, then Dutch Bantams for sale shouldn’t be hard to come by!

Even though this bird originated in Europe, this chicken breed is quite common. 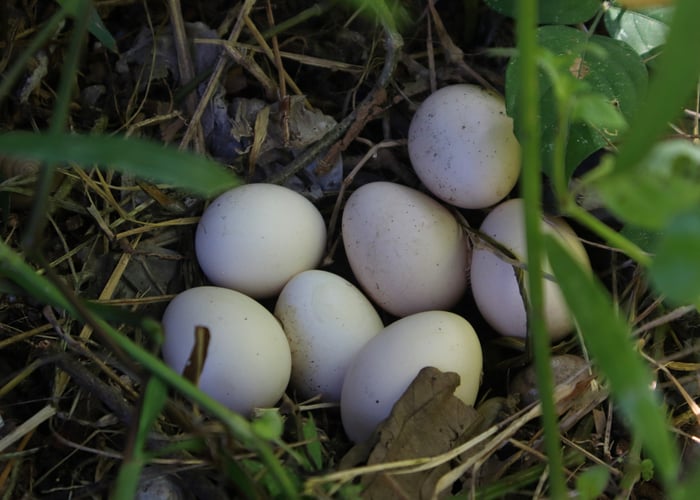 The Dutch Bantam hen is primarily known for being a broody and good setter. They are also described as protective mothers.

Once they mature, they start to produce eggs every other day from four to six months until they shed or molt.

They are excellent layers of small white eggs that are sometimes slightly tinted with light brown.

An average bantam hen can lay about 200 eggs a year, while an average Dutch Bantam hatching eggs can lay around 150 to 160 eggs per year.

With this said, they have an average or medium level of egg productivity. These hens are also broody since they make sure to keep their eggs warm until they hatch.

It usually takes 21 days to sit on their eggs and keep them warm, but sometimes these eggs hatch on the 19th day, producing a healthy set of Dutch Bantam chicks.

Once they’ve hatched, the Dutch Bantam hen holds her chicks under her wings to keep them warm.

She is extra attentive to them, whether they were in an incubator or under her warmth.

The usual size of a Dutch Bantam egg is similar to the pheasant egg. They may be tiny, but they are just as tasty as the standard egg.

Are Dutch Bantam Chickens Right For You?

If you are looking for a docile bird that wouldn’t cause too much trouble, then you should be getting a few of those Dutch Bantams for sale.

These tiny birds have a calm temperament that makes raising them such an easy task.

The Dutch Bantam chicken breed is ideal for first-time chicken owners as they are very friendly birds and easy to train.

When looking for a good source of chicken eggs, a Dutch Bantam hen can provide you with just enough to sustain your needs. They even used them to being raised to feed an entire family.

A Dutch Bantam hen is an excellent layer compared to the average number of eggs that a bantam chicken can lay. Hence, having a flock of these can certainly help you gain a profit as well.

However, if you feel you can’t get much out of tiny eggs, then having Dutch Bantam hatching eggs may not suit you. You can opt for standard chicken breeds instead.

A Dutch Bantam chicken is not cold-hardy due to its small size and comb type. If you live in a more relaxed environment, then looking at Dutch Bantams for sale should be off your list.

FAQs about a Dutch Bantam Chicken

Are you still a little confused about Dutch Bantam chickens? Well, most people are!

Here are some of the frequently asked questions about the Dutch Bantam chicken breed and what else you should know about them:

It may be the first time you’ve heard about the Dutch Bantam chicken breed, but they are more common than we thought.

These birds are prevalent in Holland, the Netherlands, the United Kingdom, Germany, and other countries in Europe. They also have increasing popularity in the United States.

How Long Do Dutch Bantams Live?

These birds live depending on the Dutch Bantam recognized variety. It is said that their lifespan would depend on the breed, care, and environment.

The Dutch Bantam chicken lifespan can range from 4 to 8 years. Other Dutch Bantam hens lay eggs for 2 to 3 years.

Whatever is the Dutch Bantam chicken breed of your birds, you can help them live a long, healthy life with an extra TLC. Also, make sure to give them the nutrients and appropriate living conditions they need.

How Big do Dutch Bantams Get?

Like any bantam chicken, Dutch Bantams are smaller than the standard chicken. They have a medium-sized comb, and their wings are large enough to carry their small bodies while flying. 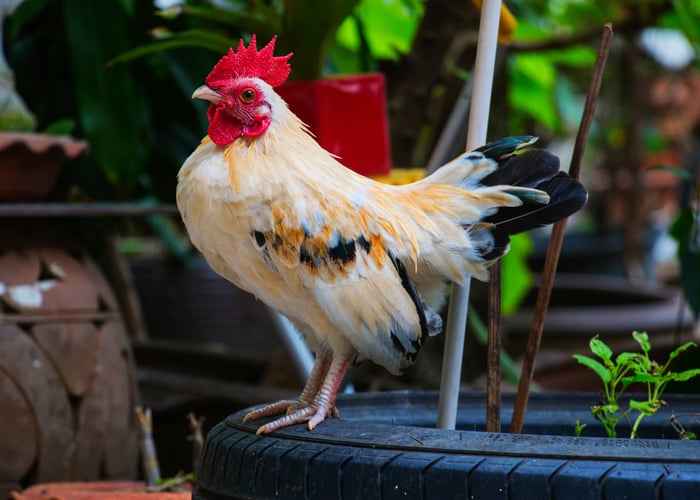 How to Take Care of the Dutch Bantam Chicken

Are you considering getting Dutch Bantam quails? Here are ways to take care of them:

Like the standard chicks, the Dutch Bantam chicks get most of their nutrients from a chick starter. You should give it to them until they are 12 to 14 weeks old.

If you have Dutch Bantam hatching eggs, it’s best to give her laying mash that is in crumbled form. The laying pellets may be too big for this little bird.

You can also give your Dutch Bantams supplements to improve their growth. Just make sure that clean water and feed are always accessible to your chickens.

One of the advantages of raising the Dutch Bantam chicken is that it requires only minimal space.

You can also provide a chicken run for them but cover it to protect them from predators.

Dutch Bantam chickens will do well in both confinement and free-range environment. However, it’s best not to leave your tiny birds out in the open since they can quickly become prey to predators.

Preparing 3 to 4 square feet per chicken would be enough for these ornamental birds. The coop should also be well-lit and ventilated.

The Dutch Bantam chicken is generally easy to breed. If you look for the correct gender ratio, you can have one Dutch Bantam rooster for every ten hens.

They are natural breeders, and they could lay enough fertile eggs with an excellent hatch rate.

However, if you don’t know how to breed them yourself, you can always ask the help of a chicken breeder.

When it comes to true bantams and notably small birds, a Dutch Bantam chicken happens to be first on the list.

They are trendy in several countries in Europe and the United States.

That is probably why most chicken lovers wouldn’t miss getting one of those Dutch Bantams for sale. If you plan to raise these tiny birds, you wouldn’t have much trouble.

The Dutch Bantam chicken breed has a reasonably docile temperament, and they are great egg layers. Their Dutch Bantam behavior makes them perfect birds for beginners.

When purchasing Dutch Bantam chicks, one thing to look out for is choosing pure breeds. Some are from the Old English Game bantam lineage, which is not ideal for this breed.

When choosing the proper Dutch Bantam chicken, you can always contact an expert in your area. You can also get a list of breeders you can directly ask about Dutch Bantams.

READ NEXT: The Largest Chicken Breed