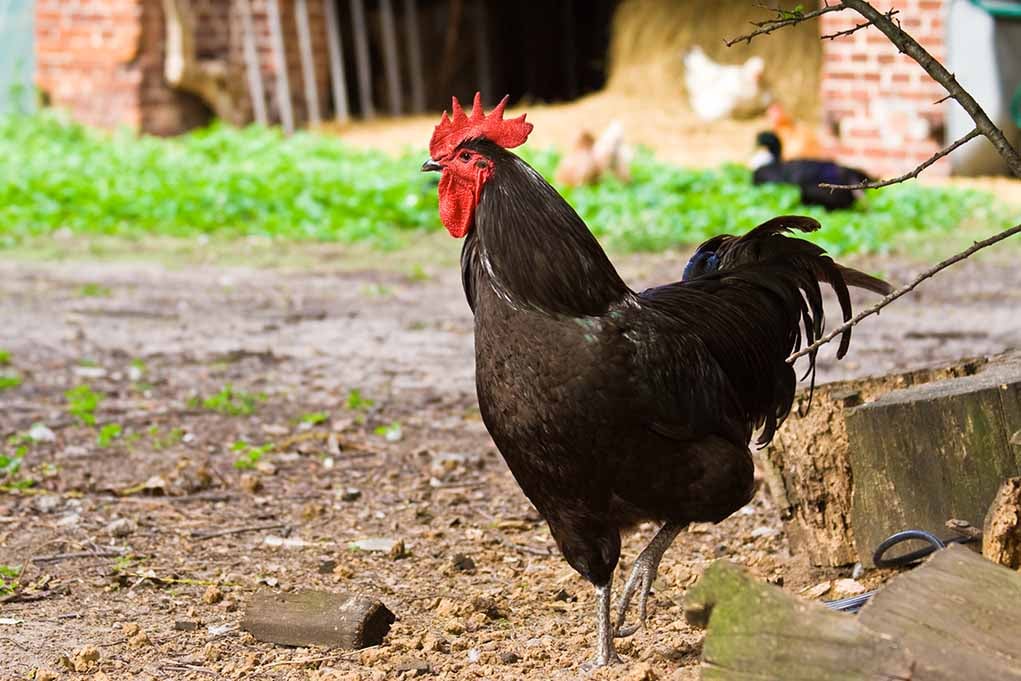 Maybe you are just curious, or maybe you have in mind a nice, big chicken dinner or large eggs, either way knowing you have likely wondered at least once what is the largest Chicken breed.

The answer is easy: The Jersey Giant is the largest chicken breed. There are many other large chicken breeds, for example, the Brahma, Cochin, and Orpington.

You can find more information on all these breeds on our chicken breeds chart. 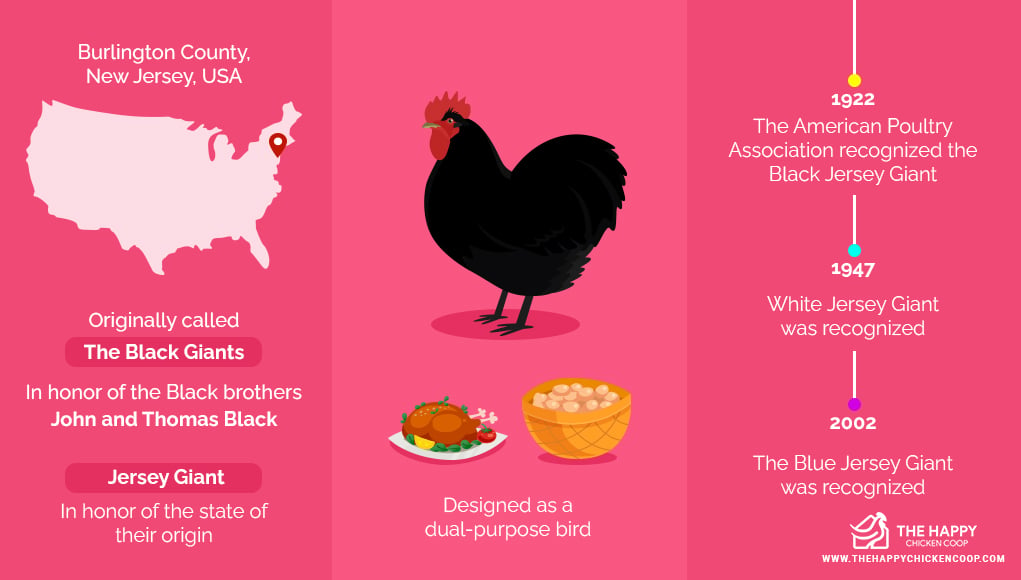 The Jersey Giant is an American breed domestic chicken. Some call it a heritage chicken breed, designed as a dual-purpose bird and a meat bird.

It was created in Burlington County, New Jersey, USA, in the late 19th century, sometime between 1870 and 1890.

It was originally called The Black Giants for the brother’s John and Thomas Black who created them.

The name was changed in honor of the state of their origin, New Jersey, thus giving them the name of Jersey Giant. 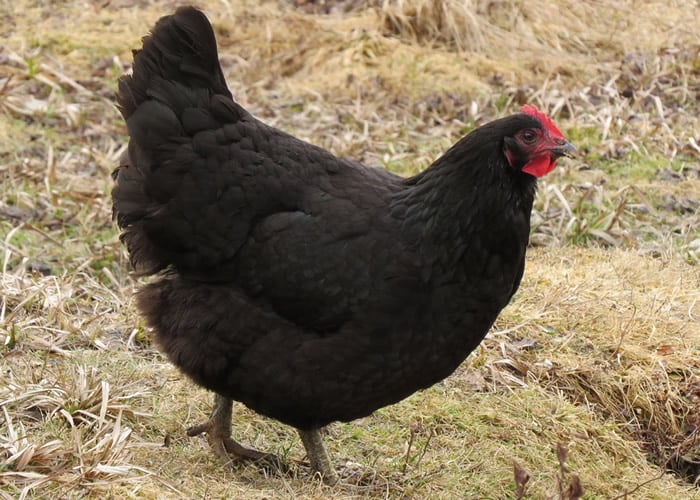 The Black brothers were trying to develop a new type of chicken that would replace the turkey, which was the main meat source used by the meat industry at that time.

Even though they failed, they came very close when they developed the Jersey Giant by crossing the Black Javas, Black Langshans, and Dark Brahmas.

Some think that they even crossbred them with the Orpingtons also.
The American Poultry Association recognized the Black Jersey Giant and added it to the Standard of Perfection in 1922.

It is also on the Livestock Conservancy’s Watch List. It has a solid black plumage with a greenish hue, its bright red comb is large and singular, and its wattles are medium/long red.

Black Jersey Giant’s carcass is yellow, covered by their plumage but visible on the bottom of their slate gray feet.

It is a variation of this breed – it was recognized and added in 1947, and its only difference from the Black Jersey Giant is its feathers are white, and it still has the same yellow legs.

Blue Jersey Giant came out in 1981 and earned its acceptance in the Standard of Perfection in 2002.

The Blue has grayish-blue feathers. Some say they are more lavender blue, with a dark lacing and black hackles – the group of feathers found along the back and side of the neck.

Some believe that the Blues should be called blue laced because of the lace-like ends of the feathers, and most believe they are the most beautiful of the breed. 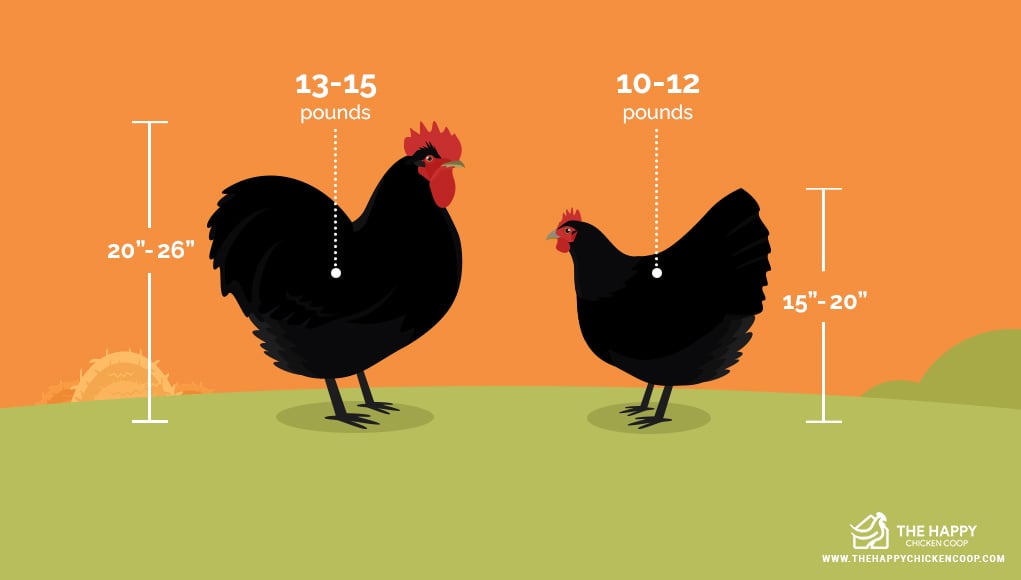 Size Of The Largest Chicken Breed

The Jersey Giant weighs in as the largest purebred chicken in the world. The male’s weigh in from 13 to 15 pounds with a height of 20 to 26 inches tall.

They are enormous, robust birds and well-built with a deep long breast described as a brick-shaped build.

Their featherless legs are black with green sheen apart from the White variety, which is of a dark willow shade, but the undersides of the feet are yellow, unlike other chickens with white soles.

Their eyes are dark brown. 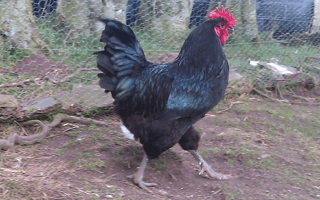 The sad thing is that it takes a chick a whole six months for it to grow its giant frame and another three months before it is large enough to be butchered.

Even though they are heavy now, they were even heavier in the past.

They were raised as capons and broilers by the meat industry for a while. But because they are growing so much slower than the more common ones today, they are not widely used in the commercial meat production industry.

Along with the heavyweight is the hefty amount of money you will have to pay for all the feed they consume.

But you need to make sure you don’t skimp on the layer feed, giving them plenty of it. Otherwise, you will also be limiting their development, and that wouldn’t be good at all.

It takes them a long time to reach their full size than other chickens, so don’t expect them to be there in an equal amount of time. 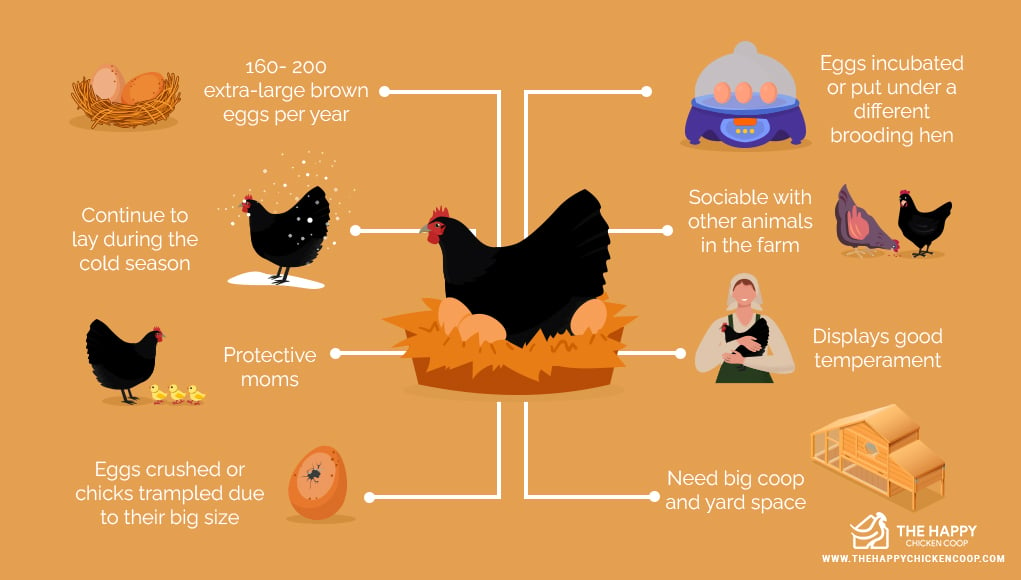 The hens are good layers and are especially good in the wintertime, laying from 160- 200 extra-large brown eggs per year.

When others stop laying eggs during the cold season, you can count on these carrying on.
The hens are proud moms, very protective, and will gladly brood chicks.

As a matter of fact, they love to, but their massive size most of the time leads to the accidental crushing of the eggs or trampled young chicks.

You should use an incubator for the eggs or follow what others have done and put the eggs under a brooding hen from a different breed and let her hatch them for you.

Just remember they usually take an extra day or two to hatch, so be very patient.

They will fit quite well in a small farm atmosphere but maybe a little too big for a small yard. The farmer says they seem to enjoy the other animals on the farm, displaying a desire to be sociable.

They are very docile, the quietest breed, and even the rooster is said to have an excellent temperament far less aggressive than other roosters.

They love their human friends, excited to see them, running up to them for a good petting and eating right out of their hand, and you can actually tame them very easily.

They got their nickname “Gentle Giants” because they are gentle but oh so big.

They don’t become cantankerous as they get old, but they keep their gentle, laid-back ways no matter how old they get.

Jersey Giants need more space in every sense of the word, including the door entrance to the coop. Make the roost perches and nesting boxes large enough for the adult birds.

Don’t forget about their large weight when making their roost and make it sturdy enough, because you might find the roost on the ground the next time you go for a visit to the chicken coop if you don’t.

They like to forage, so make sure they have plenty of space for roaming.

One good thing is they don’t care to fly and probably can’t due to their weight, so that you can make a short fence work quite well without any worries. 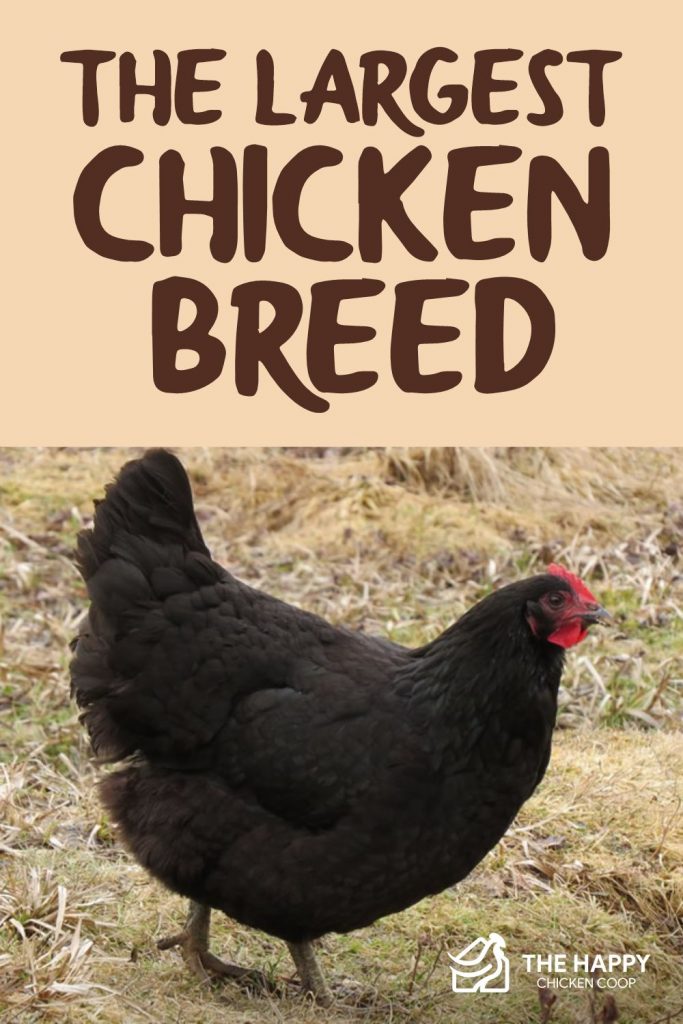 9 thoughts on “The Largest Chicken Breed”